Accessibility links
Think Nobody Wants To Buy Ugly Fruits And Veggies? Think Again : The Salt As much as a third of the produce grown on some farms is rejected because it doesn't meet beauty standards. But it's still tasty and healthy. One big firm is now telling growers: Give us your uglies.

Remember that old movie trope, in which the mousy girl who never gets noticed takes off her eyeglasses and — voila! — suddenly, everyone can see she was beautiful all along? 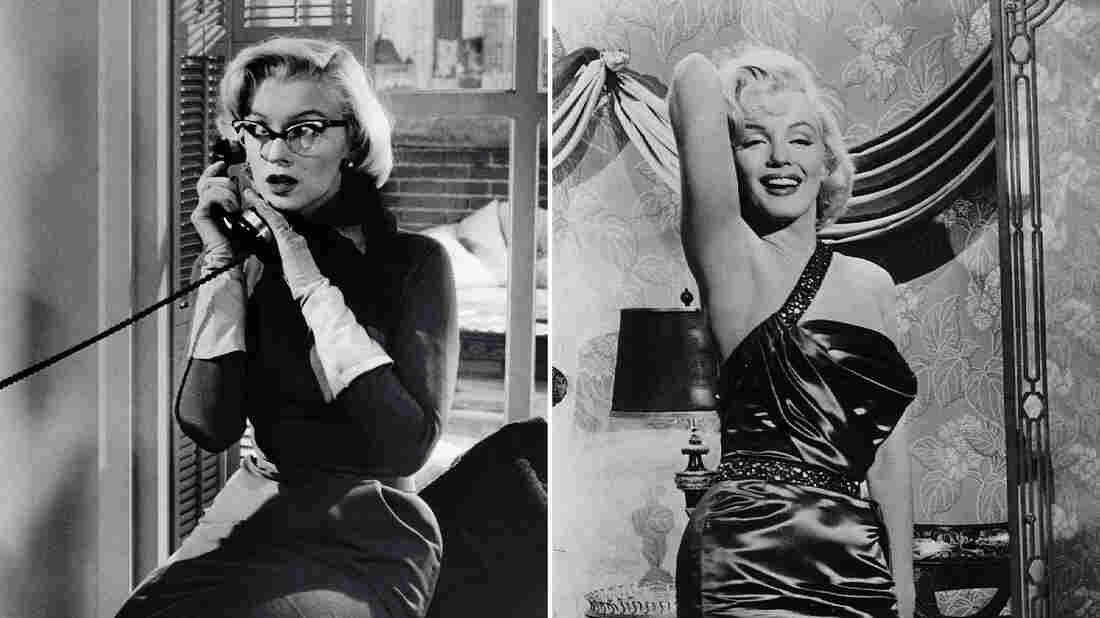 She was a beauty the whole time?! Marilyn Monroe in How To Marry A Millionaire. The Kobal Collection hide caption 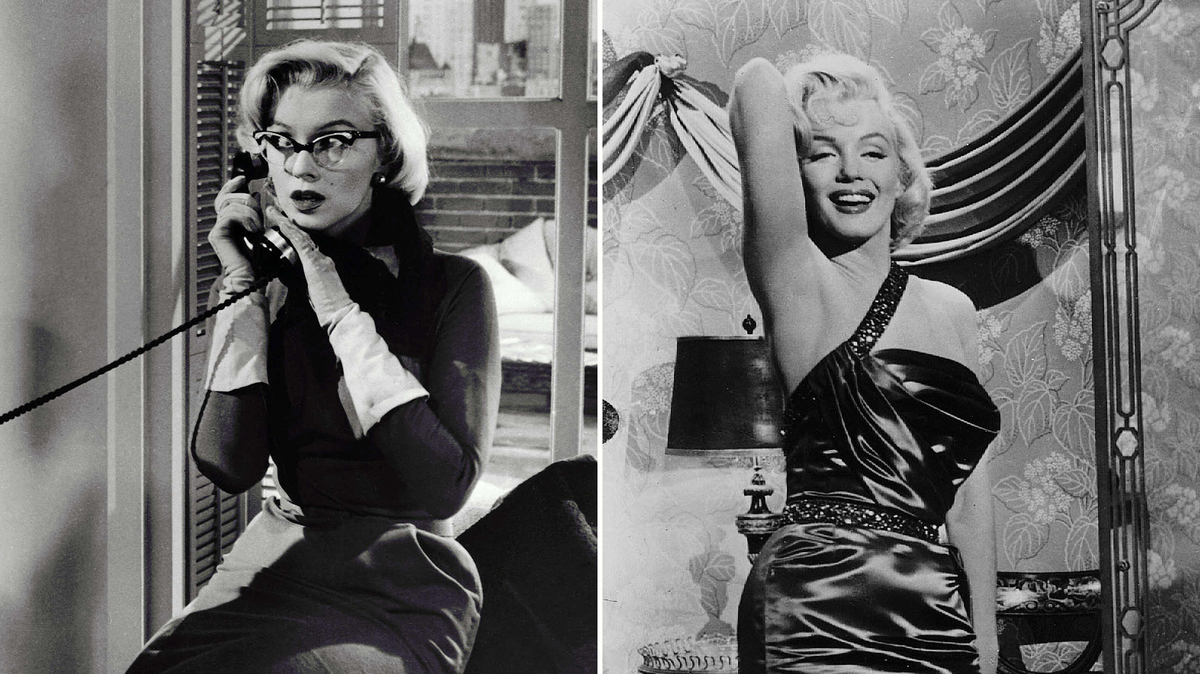 She was a beauty the whole time?! Marilyn Monroe in How To Marry A Millionaire.

Well, a similar sort of scenario is starting to play out in the world of produce in the U.S. (minus the sexist subtext).

Around the country, food service companies, grocers and entrepreneurs passionate about fighting food waste are rallying to buy up fruits and vegetables excluded from the produce aisle because of their defects. We're not talking rot or bad taste here, just purely superficial stuff (the equivalent of those geeky glasses in our movie scenario): a carrot with multiple tips, a leek that grew in curvy, apples dented by hail.

Such imperfections happen all the time on the farm, but they don't fit the standardized version of fruits and vegetables consumers have come to expect. While farmers have traditionally donated some of this, up to now, many have had little financial incentive to market this produce, since big buyers don't want it. 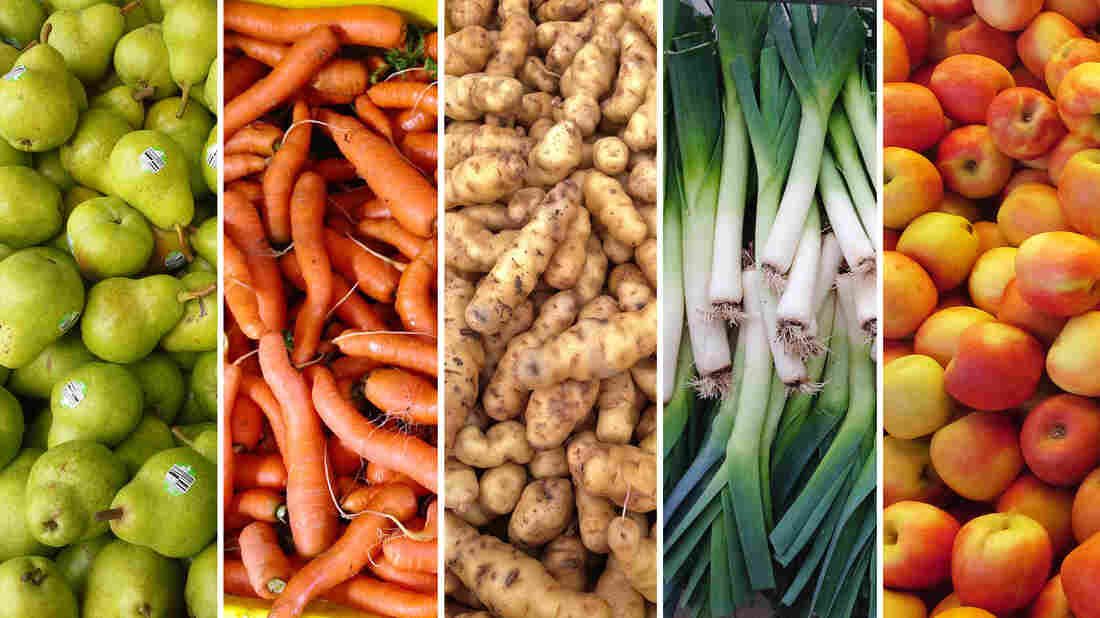 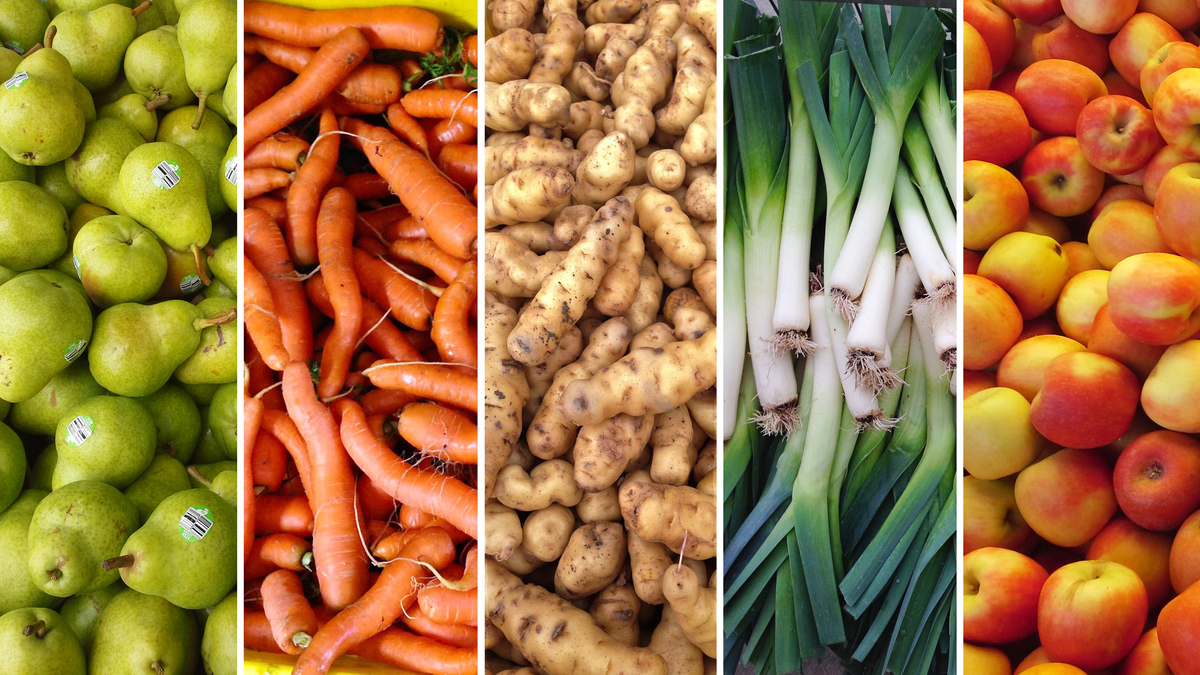 Not so ugly, eh? Supposedly imperfect produce rescued and reclaimed for consumption by Bon Appetit and Better Harvests.

"The worst offender for us is potatoes. I'd say we cull up to 30-35 percent ... because of weird, cosmetic things they have," says Tim Terpstra, the farm manager at Ralph's Greenhouse, which grows mostly root vegetables on a 250-acre spread in Mt. Vernon, Wash.

Those "weird" things include problems like silver scurf, a sheen that can turn potatoes gray, or hollow heart, which leaves a cavity in the center of the tater. These tubers are still tasty and edible, but Terpstra says no one really wants to buy them.

Until recently, that is.

Last May, the Bon Appetit Management Co., an $800 million food service company owned by Compass Group USA, began a program called Imperfectly Delicious Produce, or IDP. It's designed to buy up some of the uglies out there and use them in meals served in its cafes across the country.

"The true inspiration [for the program] was, frankly, seeing all the waste on farms," says Claire Cummings, a waste specialist for Bon Appetit who created the Imperfectly Delicious program. "It's appalling, it's frightening, it's compelling enough to make you want to do something about it."

But rejiggering the complex supply and demand system of a large company like this one is no small feat.

First, Bon Appetit had to ask its distributors to find out from growers what beauty-challenged fruits and veggies they had on hand that would otherwise go to waste. Let's say a farmer has lots of spinach that can't be sold because the tips of the leaves got clipped during harvesting. Usually, there's no incentive to pay workers to go and harvest that spinach, because it can't be sold as a standard bunch. 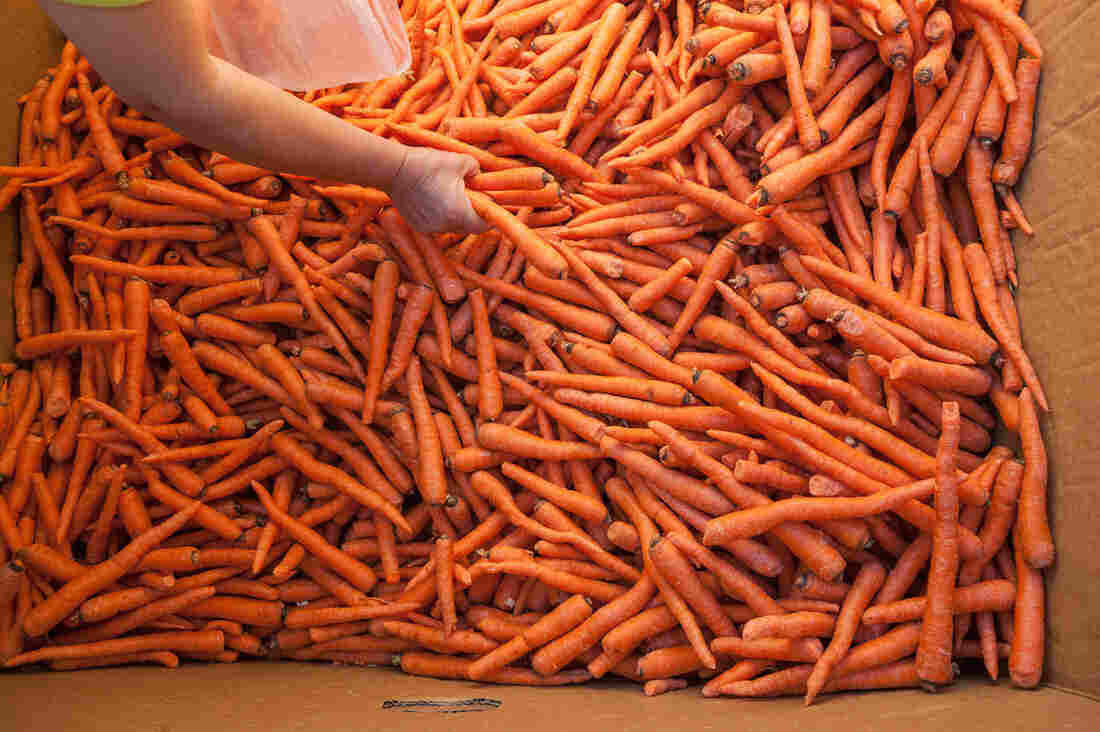 Crooked carrots reclaimed by Ron Clark and his team at Better Harvests. We've shown you entertaining examples of malformed produce before. But "the funny thing about ugly produce," Clark says, "is that most of this produce is really beautiful. That's the irony." Ron Clark/Courtesy of Better Harvests hide caption 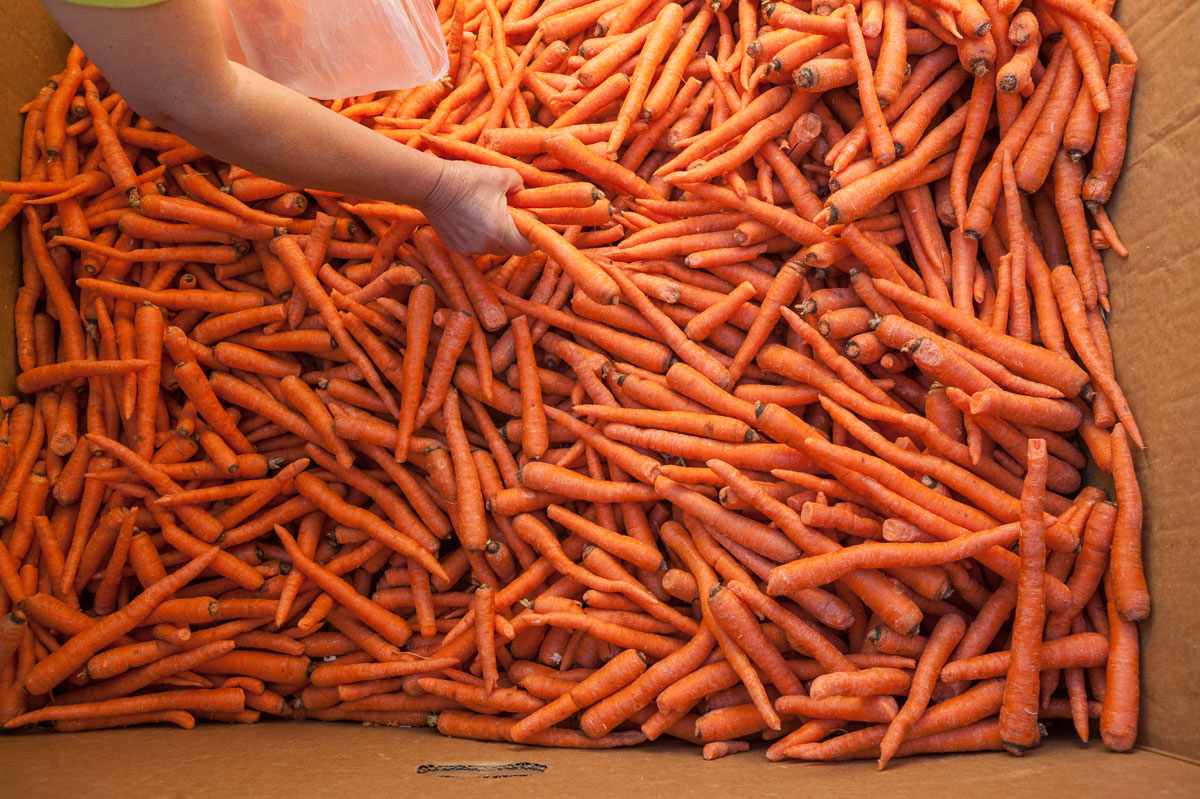 Crooked carrots reclaimed by Ron Clark and his team at Better Harvests. We've shown you entertaining examples of malformed produce before. But "the funny thing about ugly produce," Clark says, "is that most of this produce is really beautiful. That's the irony."

But Bon Appetit's chefs — if they know that clipped spinach is available — can rework their menus to incorporate it. So while it won't be good for salad, it's great for quiche.

It's hard to pin down just how much produce ends up as waste in this country due to unsightliness, because the U.S. Department of Agriculture doesn't track it. The research available is quite limited, says JoAnne Berkenkamp, a senior advocate for food and agriculture at the Natural Resources Defense Council. But surveys of farmers in Minnesota and in California suggest anywhere from 5 to 30 percent of a harvest is lost this way, she says.

Ugly produce waste can also vary farm to farm. At Ralph's Greenhouse, some of these blemished fruits and veggies are donated to food banks; some are sold to processors, who chop them for use in soups or juices; a lot end up as compost, Terpstra says. Even so, he says, there's so much that didn't make the cut looks-wise that some inevitably ends up in landfills.

Ralph's has been part of the Imperfectly Delicious program since it launched in Washington state and California last year. "For us, it's an economic benefit," Terpstra says, but one that's still small potatoes — "a couple hundred dollars a week, if that." Especially compared to the tens of thousands of dollars of perfect produce the farm sells each week. But, he notes, "we were getting nothing from it before."

But Bon Appetit operates some 500 cafes in 33 states, and as it scales up the program, "I do think it could make a significant difference" in reducing food waste, says the NRDC's Berkenkamp.

In California alone, Bon Appetit's Cummings says, the program has bought up some 35,000 pounds of produce that may have been destined for the landfill. The company is beginning to implement Imperfectly Delicious in Oregon and several East Coast states, too.

And there are others trying to grow the market for uglies. 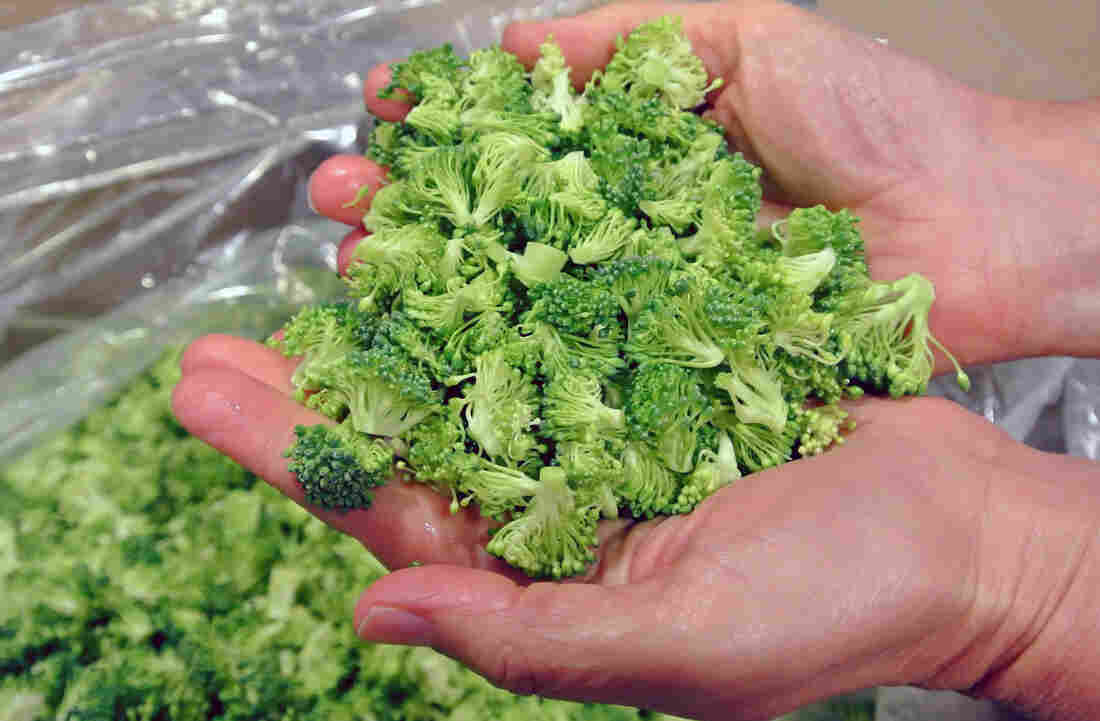 Among the produce Bon Appetit's program aims to save from the dump: broccoli fines — the little pieces that fall off during processing. "They go great on a deli line, in a stew or pre-made salad," says the company's waste specialist, Claire Cummings. Courtesy of Bon Appétit Management Company hide caption 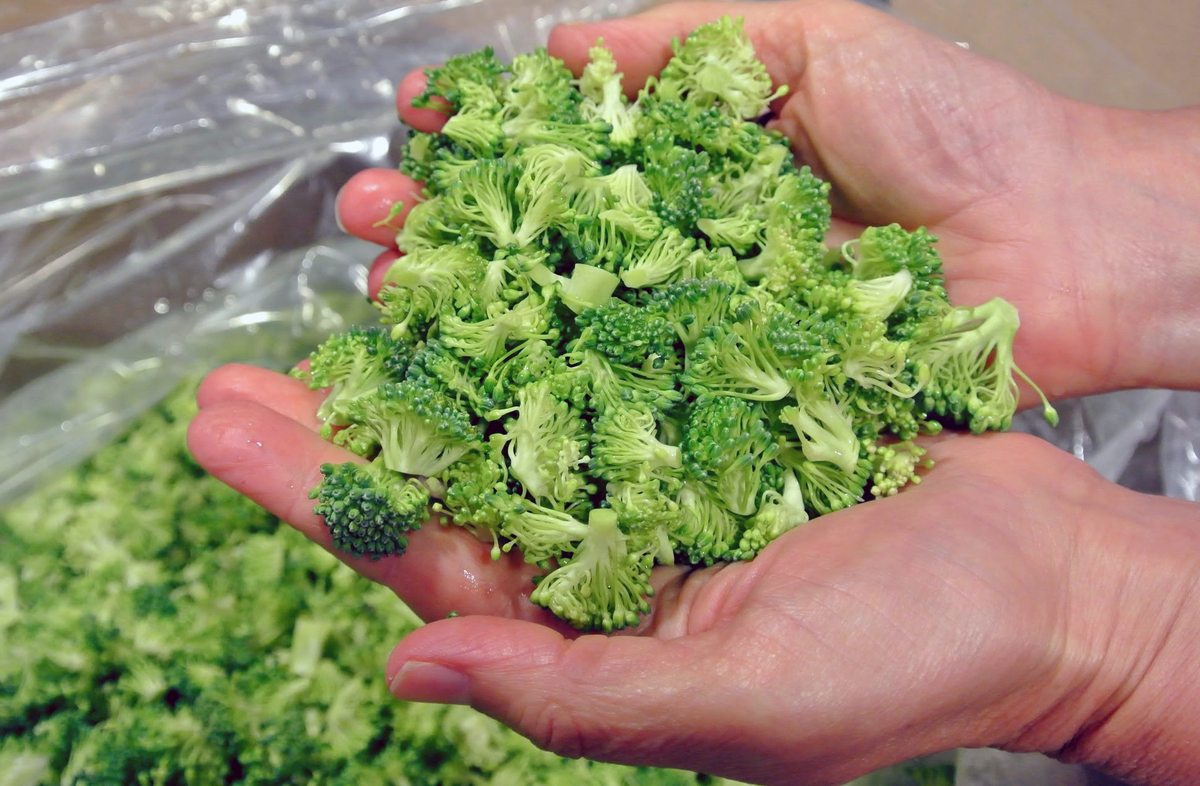 Among the produce Bon Appetit's program aims to save from the dump: broccoli fines — the little pieces that fall off during processing. "They go great on a deli line, in a stew or pre-made salad," says the company's waste specialist, Claire Cummings.

Take start-ups like Hungry Harvest, a community-supported agriculture venture in Maryland and Washington, D.C., that sells boxes of ugly and surplus produce at low cost to residential and institutional customers. For every box sold, another box is donated to needy families.

Some uncomely produce is starting to appear in supermarkets, too. For the last year and a half, Andronico's Community Markets, a five-store gourmet grocery chain in Northern California, has been selling excess produce from local growers in large bins outside its stores at steep discounts.

"Our stock in trade is organic, and in produce, it's usually a beauty contest," says Chad Solari, director of produce and floral at Andronico's. "It's kind of a leap of faith for us to jump into this." But, he says, "it meshes with who we are as a company." It helps the farmers, he says, and "it allows us to put nutritious, good-quality produce in the hands of people who wouldn't normally buy it." The program has been on winter hiatus, but Solari says he hopes to bring it back again this year.

Ron Clark, a produce broker with a long-term interest in food security and food justice issues, worked with Andronico's on its program. He says his new venture, Imperfect Produce, is in talks to roll out a similar project with a large-scale retailer in California.

"The funny thing about ugly produce," Clark notes, "is that most of this produce is really beautiful. That's the irony."

As more consumers see that, too, who knows? Maybe someday, homely produce will be the "it" girl of the produce aisle.