The Revival Of Lamb Ham: A Colonial Tradition Renewed

The Revival Of Lamb Ham: A Colonial Tradition Renewed 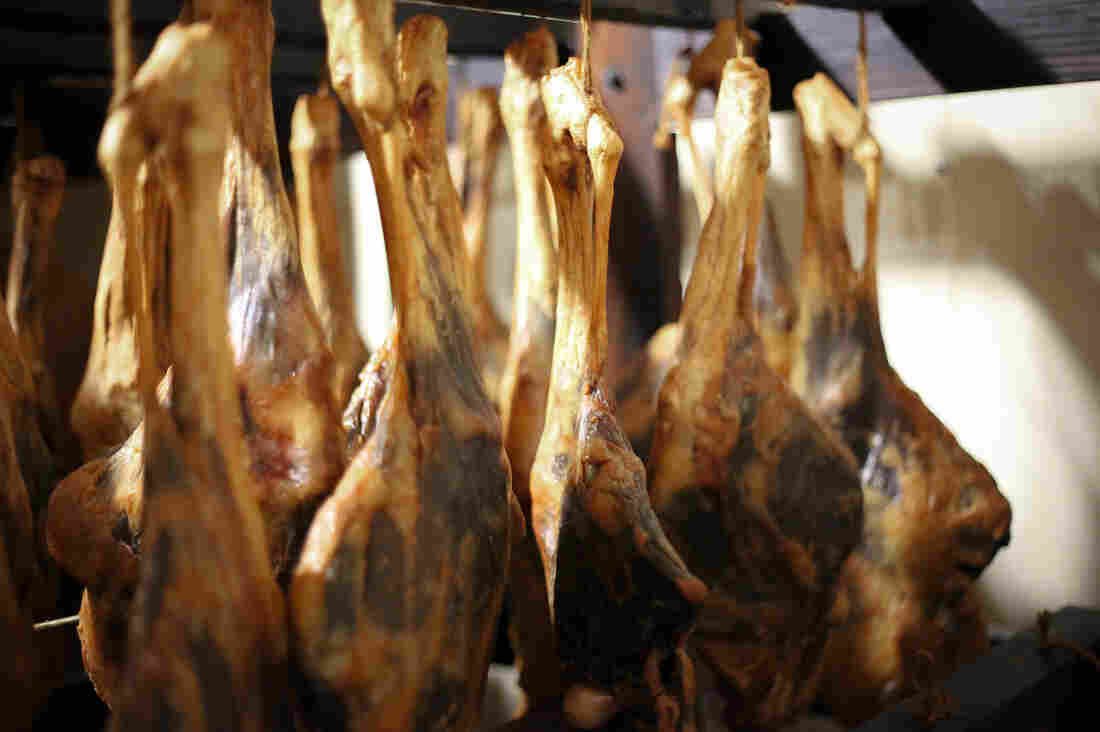 "This lamb ham is sweet, buttery and smoky, with just a hint of lamb flavor," says Sam Edwards, one of the Virginians who is bringing back the colonial style of curing lamb. Courtesy of Sammy Edwards hide caption 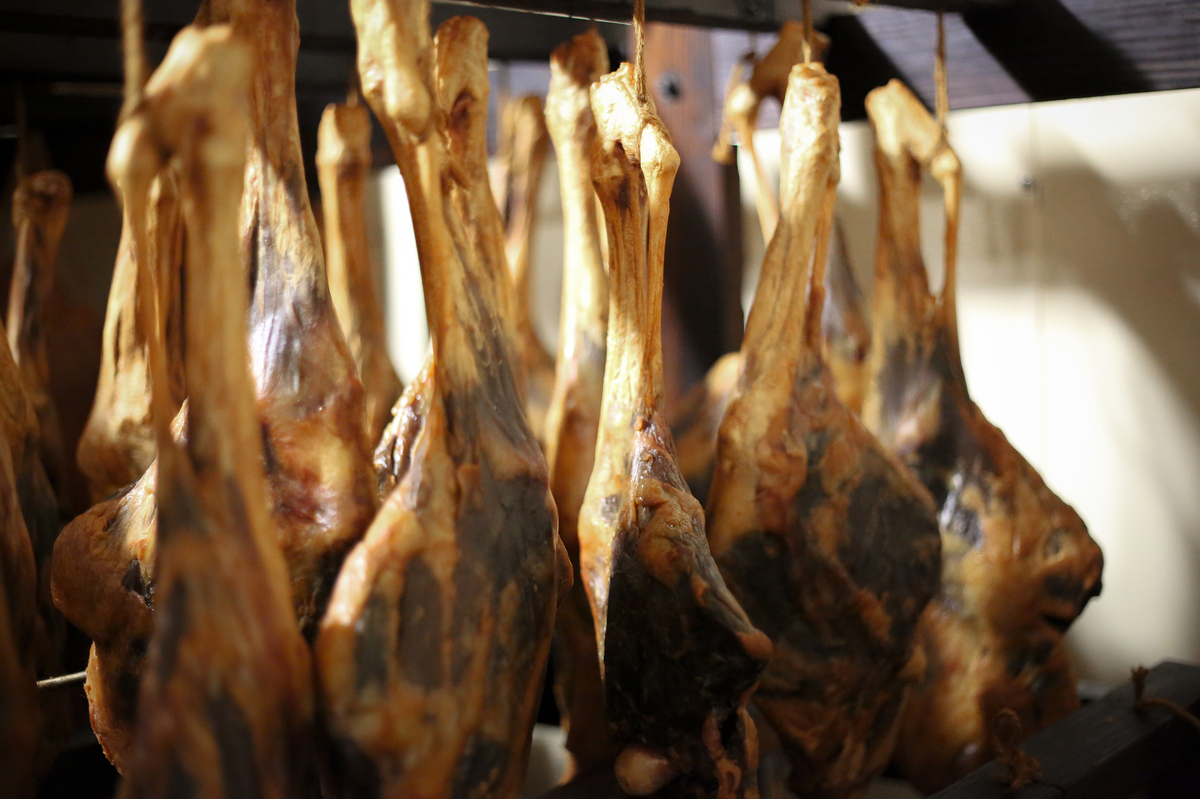 "This lamb ham is sweet, buttery and smoky, with just a hint of lamb flavor," says Sam Edwards, one of the Virginians who is bringing back the colonial style of curing lamb.

Roast rack of lamb or a platter of smoked, glazed ham — which dish should be the centerpiece of the Easter table?

Lamb is rich in religious symbolism: A sacrificial lamb was first served by Jewish people on Passover, and Christians often refer to Jesus as the lamb of God. But ham feeds more guests and makes tastier leftovers.

Soon, we may not have to choose. Third-generation country-ham curemaster Sam Edwards, of Surry, Va., and shepherd Craig Rogers, owner of Virginia's Border Springs grass-fed lamb farm, are resurrecting the "lamb ham." The spring delicacy was a fixture of American foodways in colonial times, gracing the tables of Thomas Jefferson and George Washington. 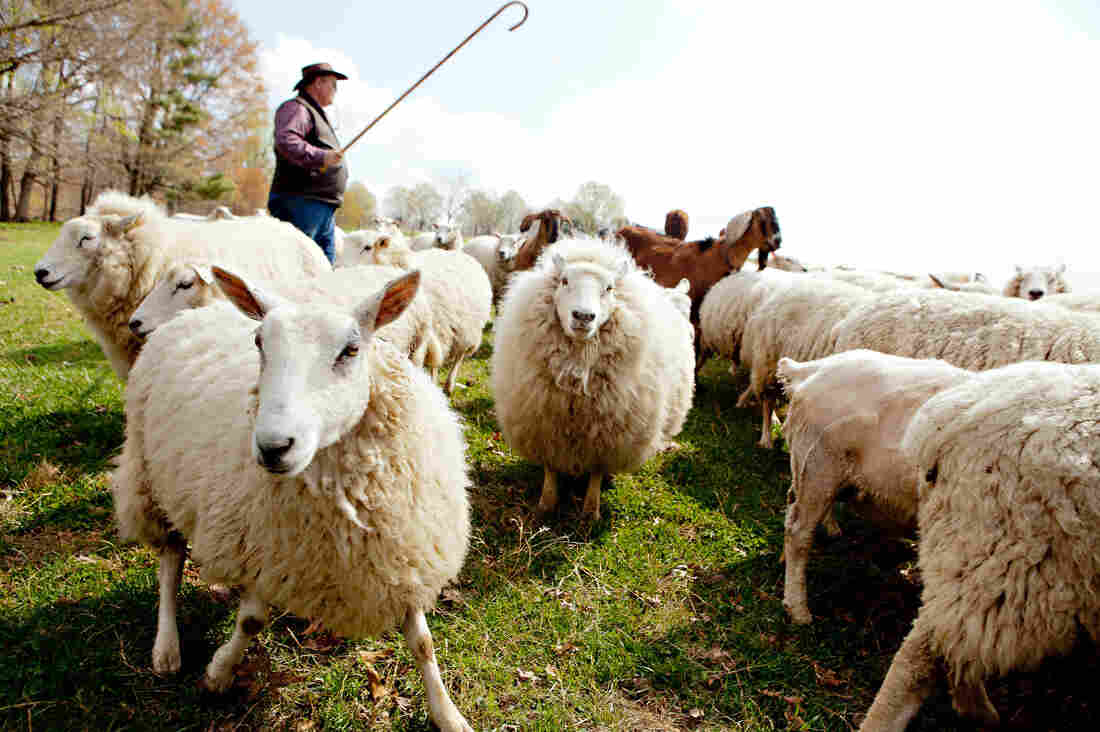 Craig Rogers with his sheep and lambs at Border Springs Farm, his farm in Patrick Springs, Va. Courtesy of Peter Taylor hide caption 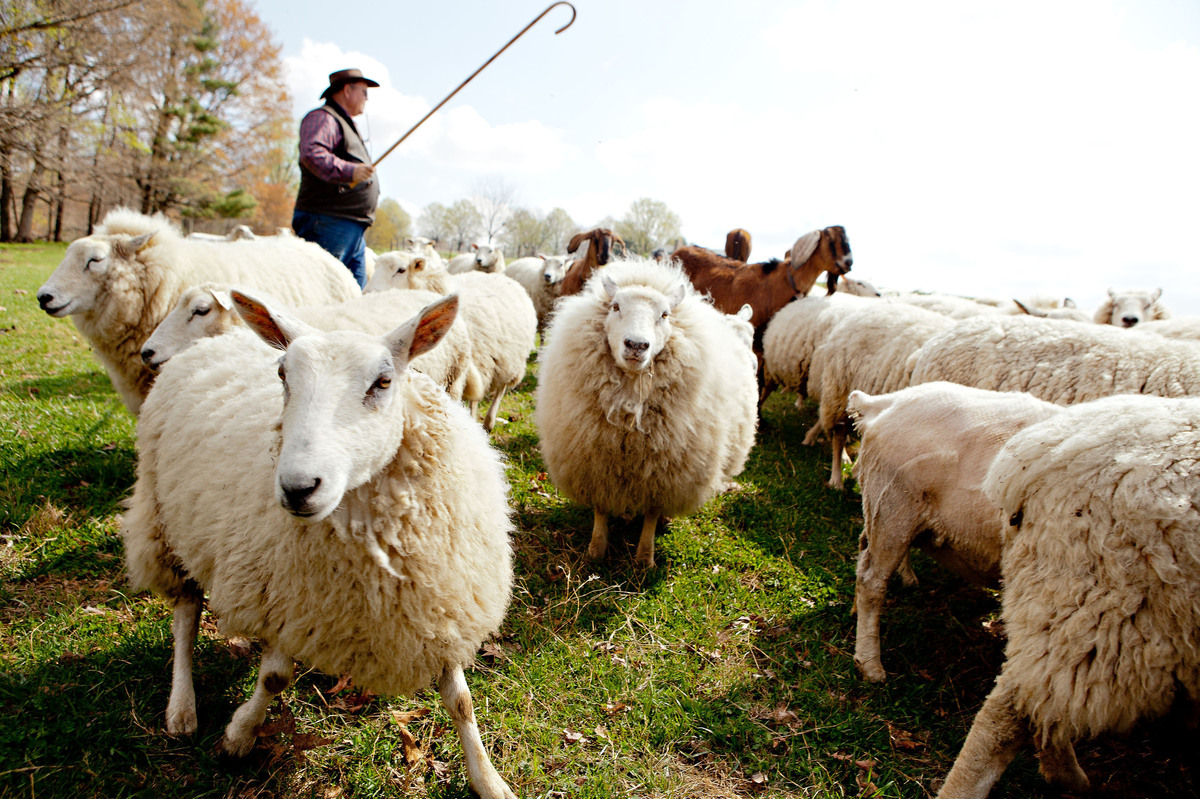 Craig Rogers with his sheep and lambs at Border Springs Farm, his farm in Patrick Springs, Va.

Using succulent, Katahdin sheep from Rogers' farm and applying Edwards' traditional smoking and curing facilities, the dish is a true "country" ham that takes six months to produce. It is, Rogers gushes, "stunning, like nothing I have had before. The richness of the lamb, coupled with salt and hickory smoke, creates this buttery, nutty, tender dish. How did something so tasty disappear so completely for so long?"

It was David Shields, a professor of English at the University of South Carolina, and author of the just published Southern Provisions: The Creation and Revival of a Cuisine, who first stirred Rogers' interest in lamb ham. In 2013, Shields sent Rogers a note about the prevalence of lamb and mutton ham in the 1800s, first in England, and then in colonial America.

"In the British Isles the mutton ham was winter fare, a cured haunch of a 14-pound [lamb] that would come to the table for slicing when company came or when the home needed something rich and comforting," Shields tells The Salt. "Prior to the 19th century, it appeared at one of two meals: at breakfast, for its rich nutrition, or at late supper for its way of complementing a nightcap."

British colonialists brought the dish to America, where a sugar-cured, smoked variety became popular in Kentucky, and a smoked lamb ham adorned sideboards in Philadelphia. Thomas Jefferson served lamb ham, "not too severely salted," at a breakfast of eggs, coffee, and dry-toast, or in the evening with Madeira wine at Monticello. By the 1850s, lamb and mutton hams were a feature of the Southern table as well. Says Shields, "Americans loved lamb ham because it tasted to them like venison — and they thought it was the best possible accompaniment to a glass of bourbon." 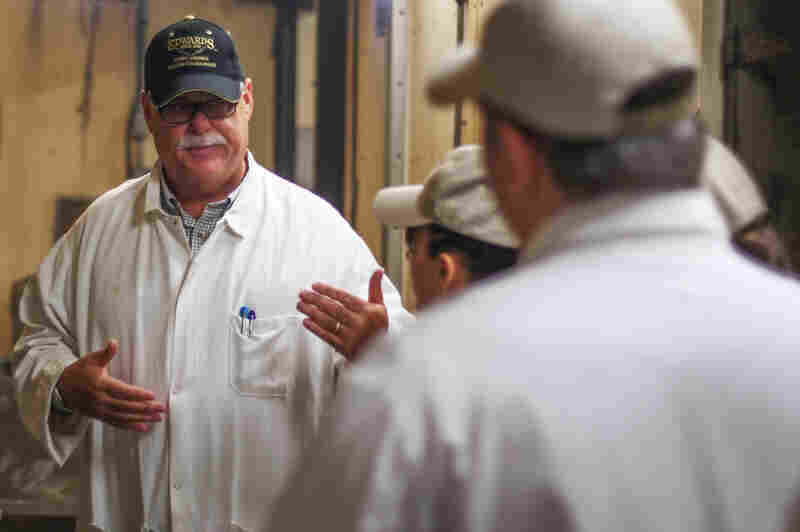 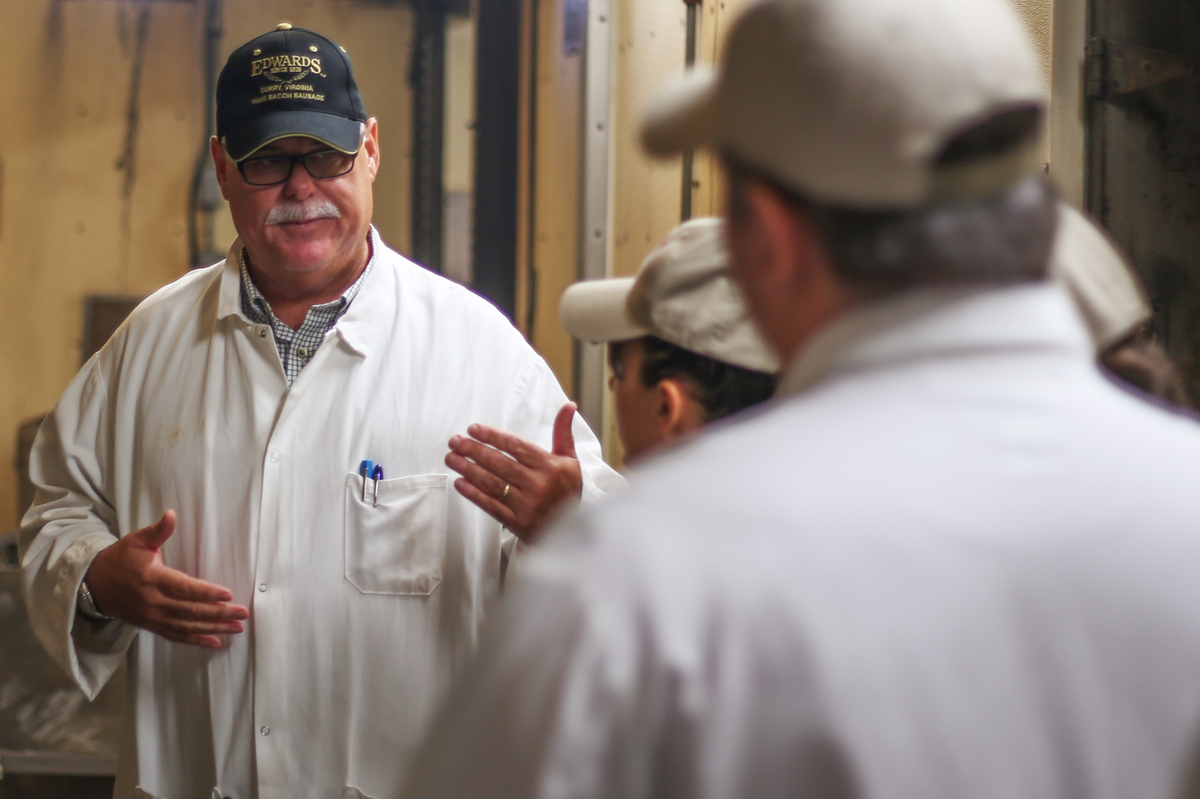 Sam Edwards is a fourth-generation country-ham curemaster in Surry, Va.

So what happened to lamb ham? Why did it disappear, and how did pork ham come to dominate?

According to Shields, there was a two-pronged attack on mutton and lamb in the early 20th century. "The gospel of fiber, fleshly purity and colon health preached by James Caleb Jackson, the Kellogg brothers, and Charles William Post cleared meat of any kind from the morning meal," Shields says. "And then there was the greater economy of prepping commercial lamb for roasting rather than curing it."

Pork ham — easy to cure, replete with fat, and substantially larger than lamb — took its place at dinners and holidays.

Edwards' family has been dry curing hams since 1926, and their Surryano ham is widely regarded as one of the most glorious prosciuttos in America.

Like Ham? There's A Festival For That In French Basque Country

"Dry curing ham is not all that different than fermenting wine or distilling whiskey," Edwards says. "We are engaging in a controlled fermentation process, and that's what gives the meat its flavor. This lamb ham is sweet, buttery and smoky, with just a hint of lamb flavor."

Edwards and Rogers say the product has just received approval from the U.S. Department of Agriculture, and should hit the shelves in 2016. The creators are toying with the name "lamón" as play on the Spanish word for ham, jamón.

"Sam and I call ourselves the Johnny Appleseeds of lamb hams," says Rogers. "Instead of bringing apples to America, we're letting people taste what Thomas Jefferson and George Washington would have enjoyed. The American larder was built on country ham. Now those who don't eat pork can have a taste of what they've been missing."

If a year seems too long to wait, Rogers recommends cooking your own "city" cured lamb ham, like the ones crafted by Charleston chef Kevin Johnson, owner of The Grocery (see recipe below).