Accessibility links
With Nostalgia And A Last Nosh, 1 Of 3 Remaining HoJo's Closes : The Salt The iconic orange roofs of Howard Johnson's restaurants were once fixtures of the American highway. But the chain faded in the '80s. The 60-year-old location in Lake Placid, N.Y., closed Tuesday. 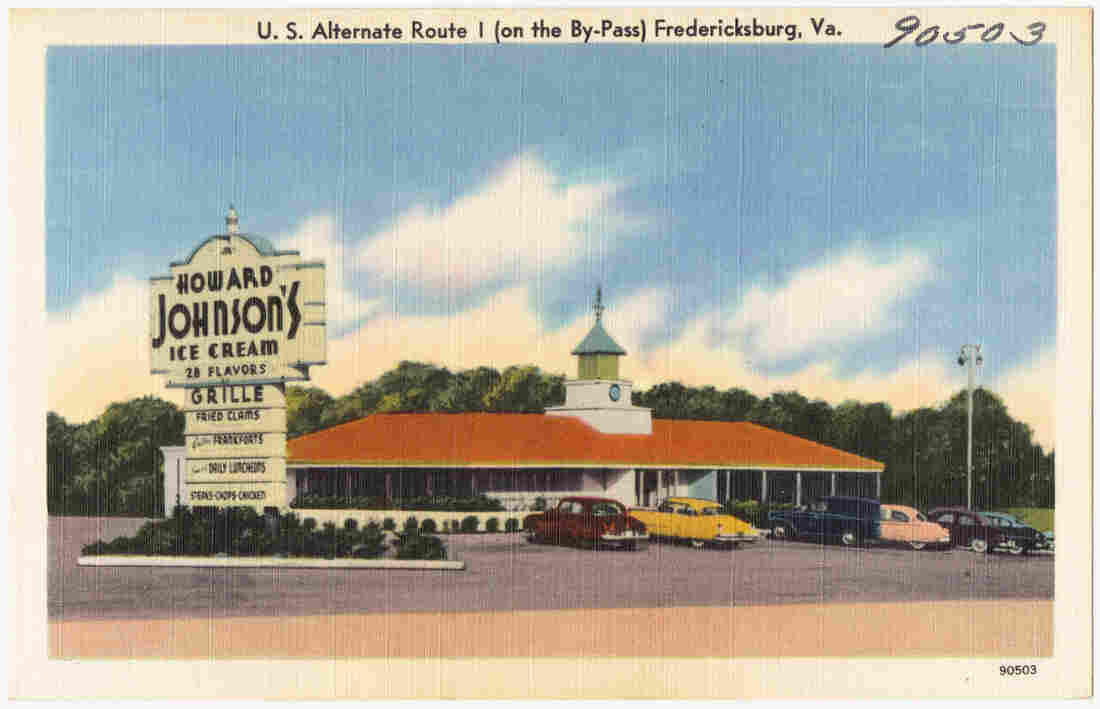 A vintage postcard (circa 1930-1945) shows the HoJo's on U.S. Alternate Route I, in Fredericksburg, Va. Boston Public Library/Flickr hide caption 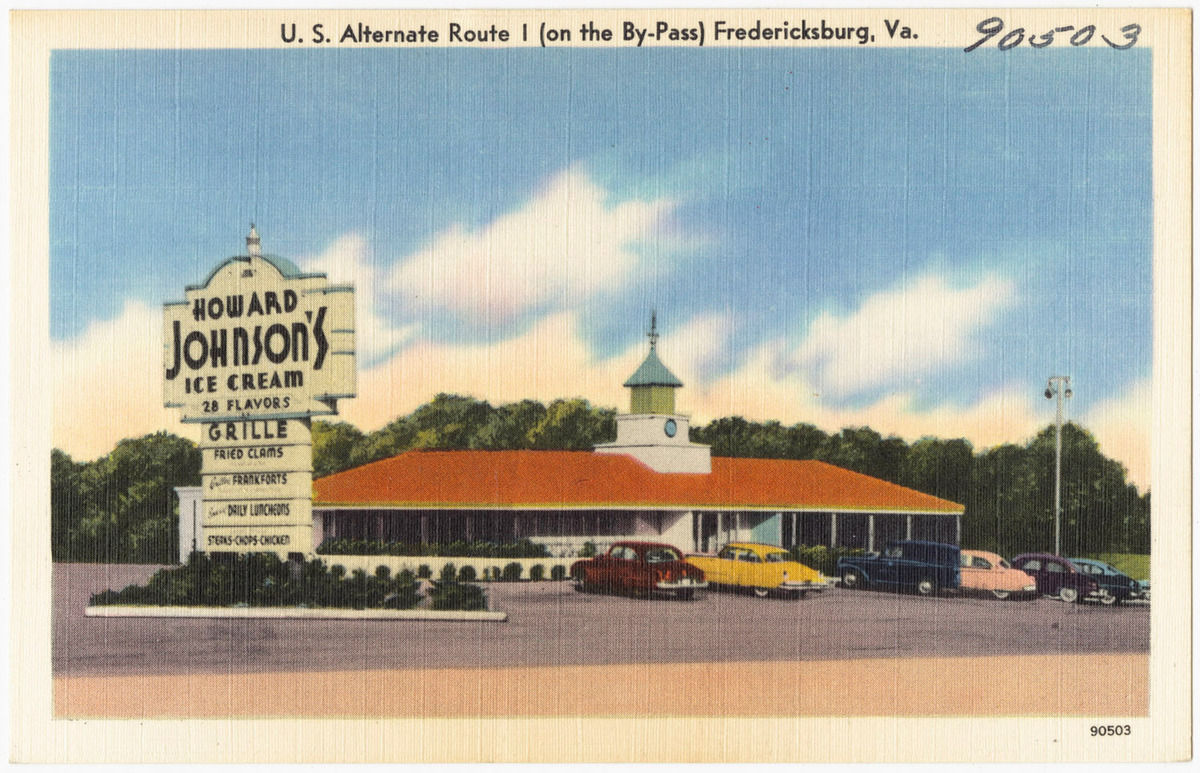 In the 1960s and '70s, Howard Johnson's restaurants were the biggest chain in the country, with more than 1,000 locations.

Their iconic orange roofs were fixtures of the American highway, beckoning hungry motorists to come and dine at HoJo's, as they were affectionately called. The ultra-dapper Don Draper dines at one location in an episode of Mad Men. At one point, the chain even sold a line of frozen foods.

Now, almost all of the restaurants are gone. One of the three last surviving Howard Johnson's eateries closed its doors yesterday in Lake Placid, N.Y.

The restaurant was going nuts Tuesday as locals crowded in to get a last taste of fried clams or the "wonderful world of 28 flavors" of ice cream that HoJo's ads once boasted.

The Lake Placid HoJo's had been running since April 1956. It stayed strong even as the national brand faltered in the 1980s, falling behind as competition grew, and as other chains introduced fresher, more appealing menus.

The current owner, Ron Butler, worked here for more than a half-century. He had been keeping the Lake Placid HoJo's alive with long hours and help from his sons, Mike and Patrick. "We were here every day, and we took care of business and this was our life," Butler says. "We didn't have another life, right?"

"No," Mike replies with a laugh. 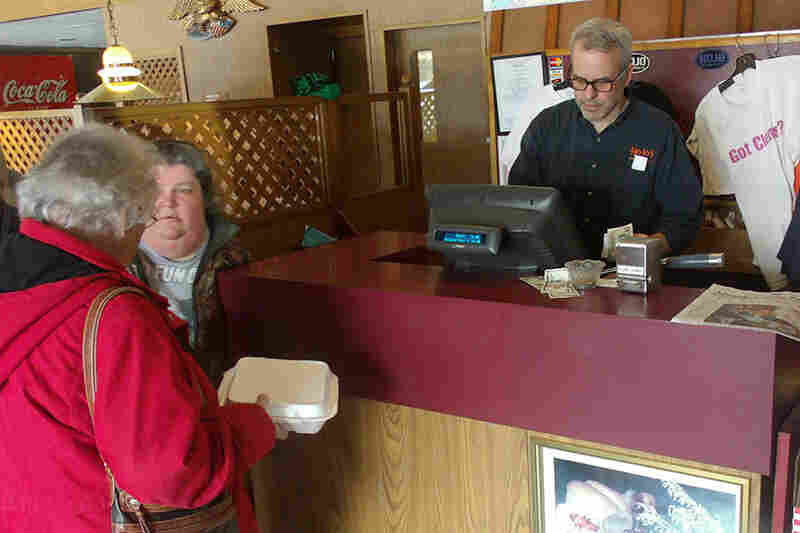 Michael Butler works the counter on the final day of business for a restaurant that opened in 1956. Brian Mann hide caption 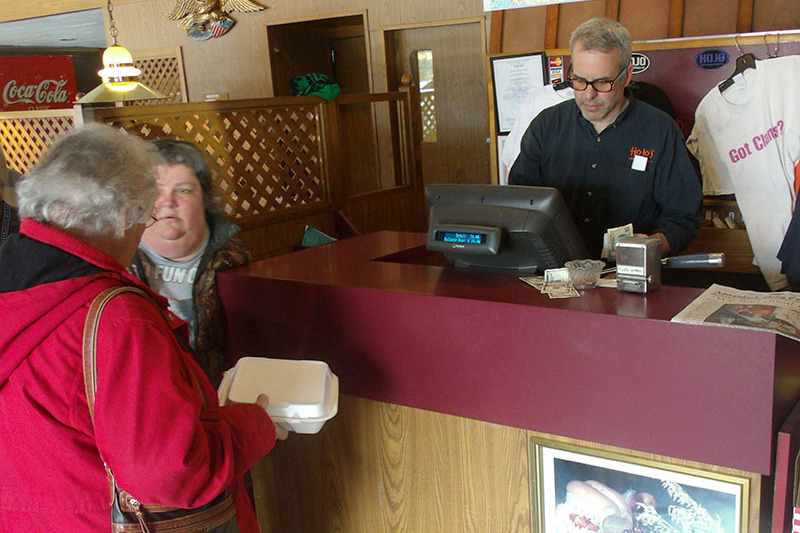 Michael Butler works the counter on the final day of business for a restaurant that opened in 1956.

Mike Butler started working in the kitchen when he was 5 years old. "I'd stand on the milk crates and butter the roll pans and get a quarter or something," he recalls.

Long after the national brand faded, Lake Placid's Howard Johnson's was a place you could bring a hockey team or a big family on a budget. On this last day, two gray-haired businessmen, Robi Politi and Wayne Feinberg, sit at the lunch counter eating clams. They say they came here as boys, then brought their own kids.

"It's a landmark — everyone has good memories," Politi says.

Feinberg adds, "I remember coming to the Friday night fish fry with my parents many, many times when I was little."

The Butlers say they loved being part of the brand and part of this chapter of American life. But after 58 years, they're ready to step away from the restaurant business. It's a tough industry, with long hours and few vacations.

With the closure of this Howard Johnson's restaurant, there are just two of the eateries left in the whole country — one in Lake George, N.Y., and another in Bangor, Maine.

A version of this story first ran on North Country Public Radio.