Accessibility links
Drinking With 'Mad Men': Cocktail Culture And The Myth Of Don Draper : The Salt The culture of retro cocktails that the show helped reignite is intriguing, considering how much of Mad Men is actually about excessive — even abusive — drinking. 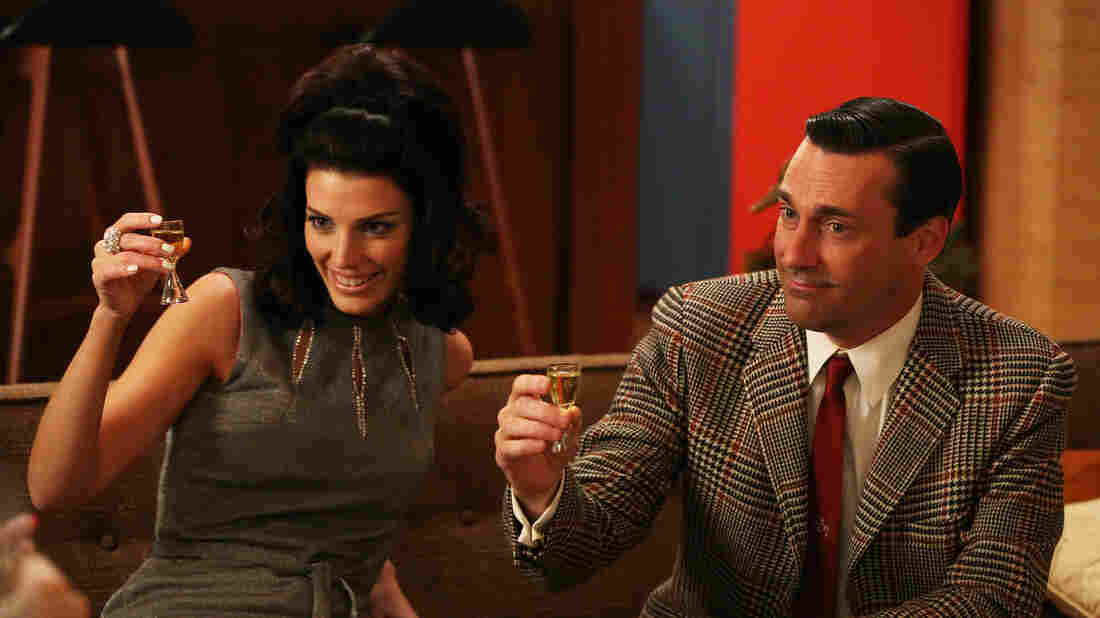 Megan Draper (Jessica Pare) and Don Draper (Jon Hamm) raise their glasses. Many fans have been inspired to do the same, but Mad Men has a complicated relationship with alcohol. Michael Yarish/AMC hide caption 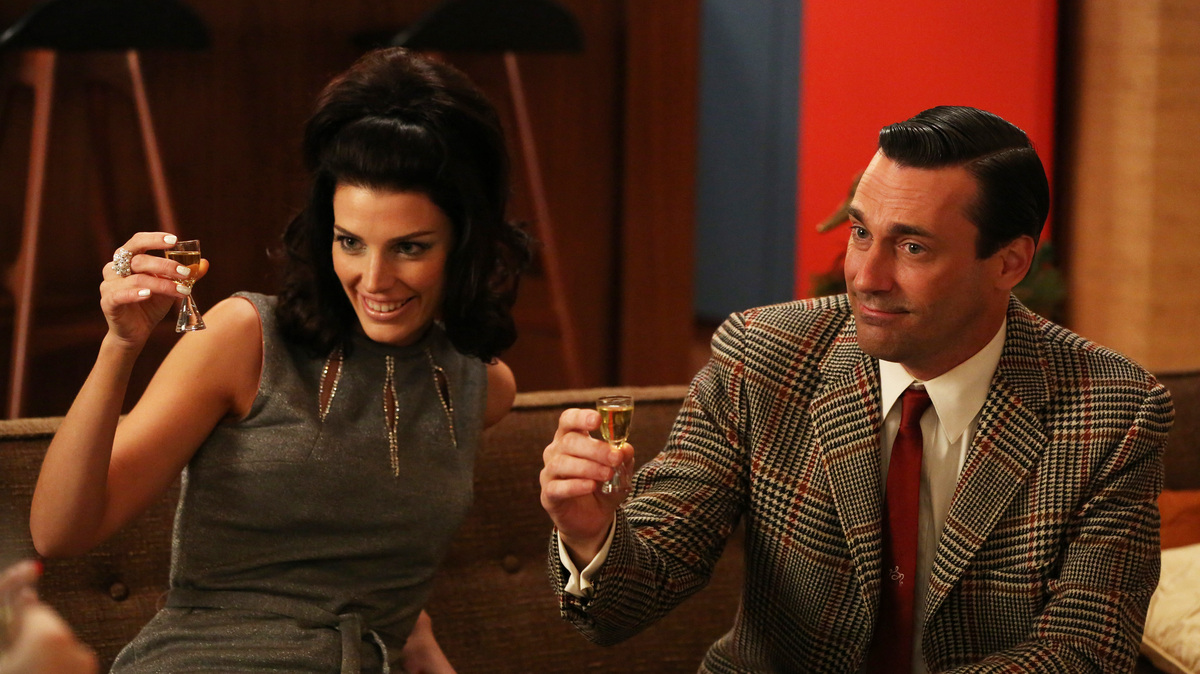 Megan Draper (Jessica Pare) and Don Draper (Jon Hamm) raise their glasses. Many fans have been inspired to do the same, but Mad Men has a complicated relationship with alcohol.

Ah, 2007: the year in which we met the first-ever iPhone, a presidential candidate called Barack Obama ... and an inscrutable ad man named Don Draper.

With its final seven episodes kicking off on Sunday, AMC's Mad Men is coming to a close after almost eight years. It's hard to overstate the phenomenal, uncommon level of cultural saturation it's achieved. Ask someone who doesn't watch it what Mad Men is about, and they'll mention the clothes (divine), the decor (sleek), and of course — always — the drinks.

The show not only introduced us to the impossibly suave, lantern-jawed Don, it also introduced a new generation of TV viewers to old-fashioned cocktails like Manhattans and martinis, gimlets and sidecars.

From cocktail guides and suggested drink pairings to reviews for historical booze accuracy and Mad Men drinking games (drink every time Harry Crane says something obnoxious!), the booze of Mad Men has spawned an online industry that suggests a viewership that's as much in love with the look, feel and lifestyle of this show as it is with its story. 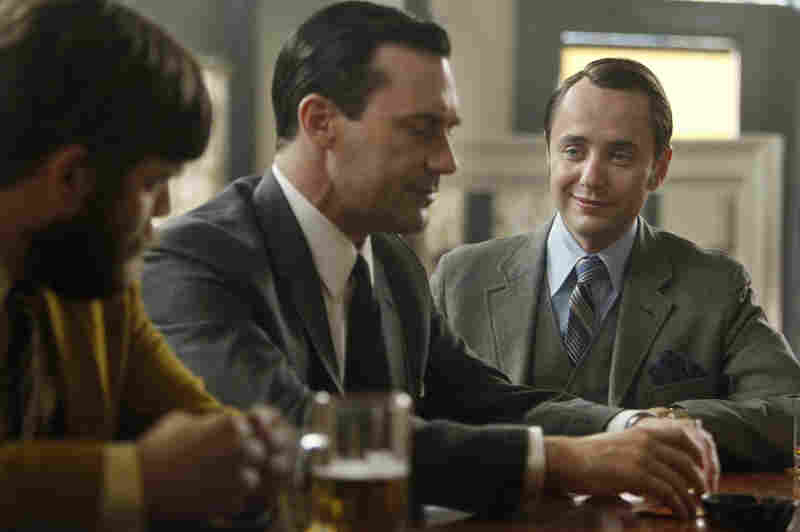 Yet, for a piece of pop culture that's basically credited with reviving public interest in stylish drinking, Mad Men's relationship with alcohol is characteristically complex. The culture of retro cocktails that the show reignited, or perhaps merely fueled, is intriguing, considering how much of the show is actually about excessive, even abusive drinking — a fact that gets lost among all those Manhattans.

It's also something that's gained undeniable poignancy with the announcement that Jon Hamm, the actor who portrays the alcoholic Don Draper so indelibly, recently emerged from a stint in rehab for alcohol addiction.

How much did this show influence our imbibing? Back in 2013, New York bartenders were apparently reporting a "Mad Men effect" on drinking habits. As Matt Grippo of San Francisco's Blackbird bar tells me, Manhattans, Old Fashioneds and Martinis "are being ordered very often, every day."

"'How Don Draper of you' — that's been said in front of me [at the bar] many times," says Grippo. ("Now, if only we can get everyone to order gin Martinis with a proper amount of Vermouth added and no olive juice, I will give the show some major props," he adds.) 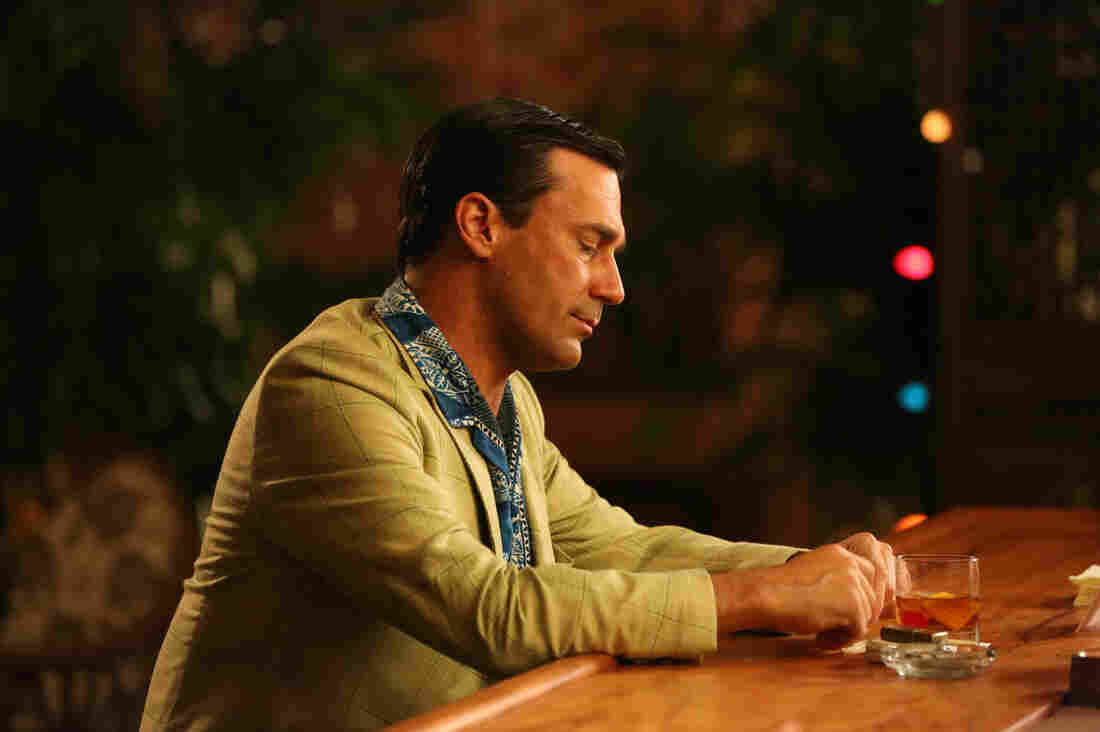 Morgan Schick, creative director for the Bon Vivants mixology team behind SF cocktail haven Trick Dog, has a slightly different take. The show "became a short-hand for the classics for a while," Schick says. But rather than inspiring our yearning for all things retro, he says Mad Men merely tapped into it. He says his clientele's craving for those classic cocktails just "happened at the same time — possibly for the same underlying reasons that Mad Men was successful."

He's also keen to dispel the notion of bartenders rolling their eyes at the umpteenth order of Manhattans by twentysomething Draper wannabes.

"If anything, it was nice to have guests with a newfound interest in some of the drinks that we all like anyway," he says.

There's no denying that Mad Men can make drinking look really good. A huge proportion of the show's gorgeously styled scenes take place in or around the wood-paneled bars, lounges and restaurants of the era (Episode 1, Season 1 even opens in one.) It's a world populated with slick movers and shakers, where confidence is non-negotiable, and those endless martinis are part of the ineffably cool image. 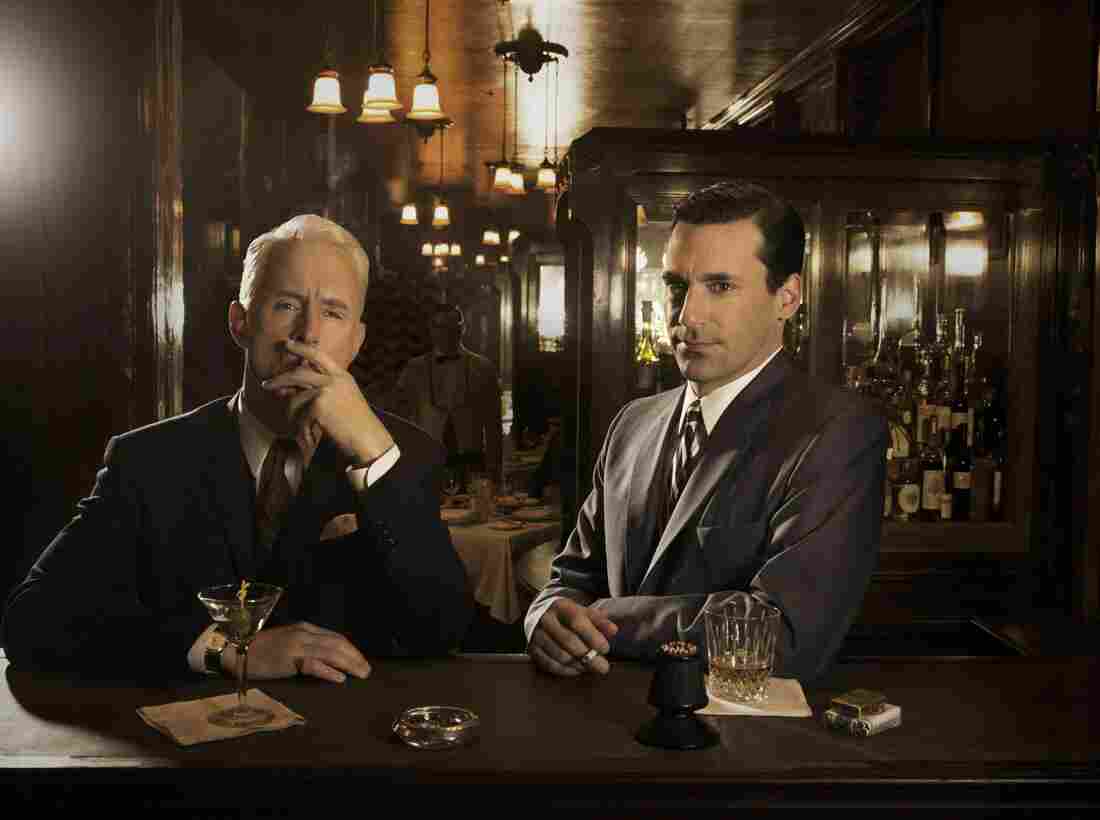 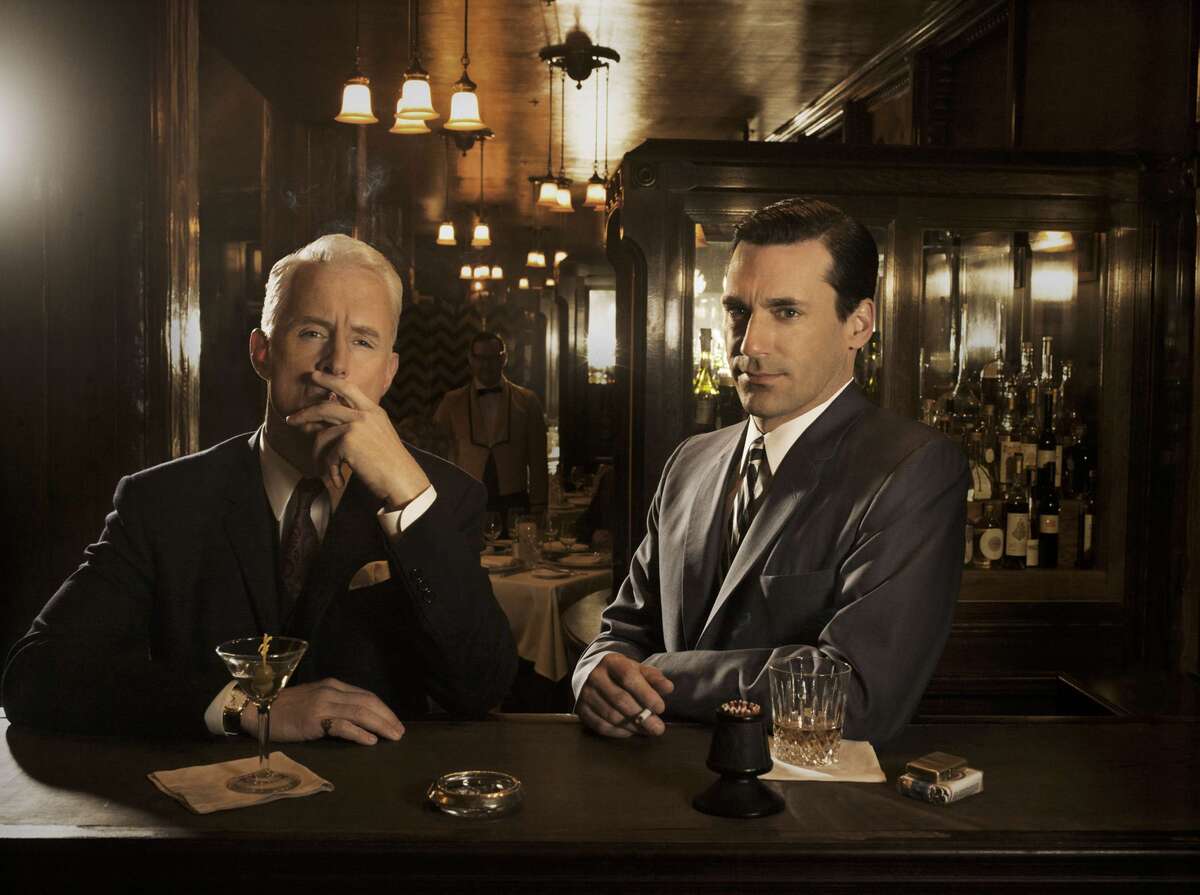 Early on in Mad Men's run, even over-consumption was frequently played as wry, jet-black comedy. Think of Don goading colleague Roger Sterling into guzzling multiple daytime martinis, then engineering a 23-floor stair climb that leads Roger to publicly lose his lunch. Or Don constructing his kids' playhouse while pounding beers in the sunshine, unable to perform his paternal duty without lubrication.

Even the horrific, champagne-fuelled "lawnmower accident" of Season 3, in which an adman loses a foot under a runaway John Deere, is presented as tragicomedy.

But as Seasons 4 and 5 chronicle Don's slide into outright alcoholism, showrunner Matthew Weiner's treatment of this theme becomes much darker. Virtually all of the least-flattering moments for Draper, this apparent paragon of retro masculinity, come courtesy of an excess of booze.

One of his most cringe-worthy lows comes when, jellified by award ceremony celebrations, he conducts a pitch for Life cereal totally hammered. The episode doesn't just represent the start of Don's slide into full-blown alcoholism. (It's the first time we see him suffering a significant lapse in memory.) It also shows him committing the unforgivable sin of being bad at what he does. 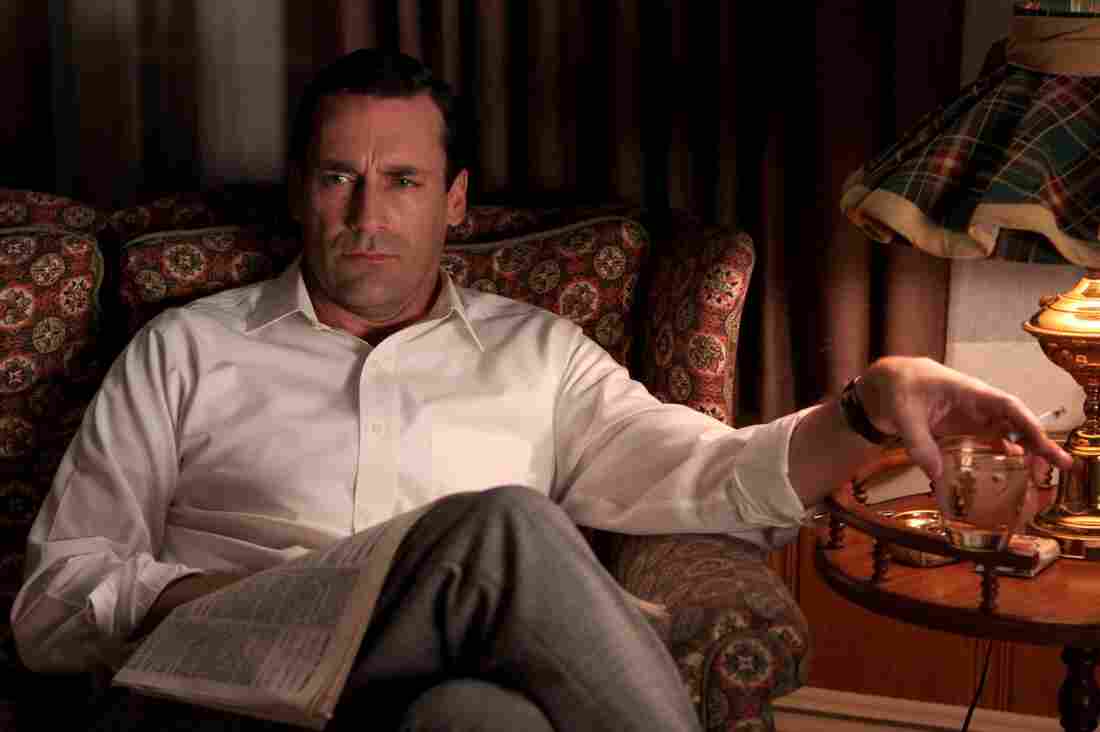 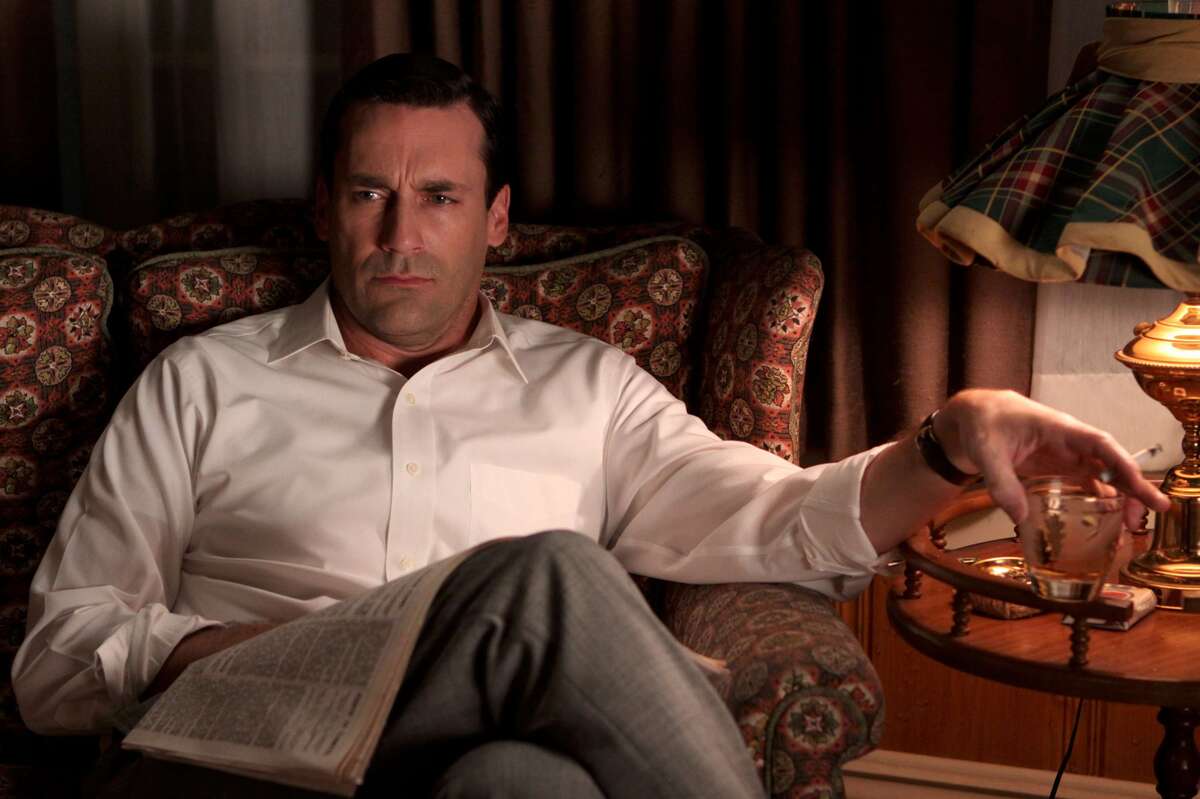 Don Draper's drinking might look stylish at first, but by now, we know better.

An even greater blow to the myth of Don Draper comes in the award-winning episode "The Suitcase." He vomits loudly in the SDCP bathrooms and grapples pathetically with the equally drunk adman Duck Phillips. The dapper Don of the previous seasons is replaced by a tragic figure with sick stains down his shirt.

As a televised advertisement for heavy drinking, this is like The Wire encouraging people to get into drug dealing, or Breaking Bad making meth production seem like a viable, risk-free sideline. (And yes, I'm aware this actually has happened.) But it's taken a long time in Mad Men years (six seasons, to be precise) for Don to be truly dislodged from his pedestal as America's Manliest Man.

As the '70s draw ever closer and Draper gets more tragic, Weiner's intent all along is becoming fantastically clear: to peel back the lie of sharp suits, constant conquests and liquid lunches to show us the unsightly reality (and terrifying future) of the Don type. In the same way that Reaganites mistook Springsteen's "Born in the U.S.A." for a jingoistic sing-a-long, we all fell for Weiner's expert "Don Draper trick."

The fallacy of the Draper lifestyle — that someone could ever drink and philander so much, yet have his family life, career and health survive unscathed — should have been obvious.

But then again, you can still find Don's sloppy-drunk Life cereal pitch posted online by Ask Men.com as one of "Don Draper's Boss Moments," so maybe not? 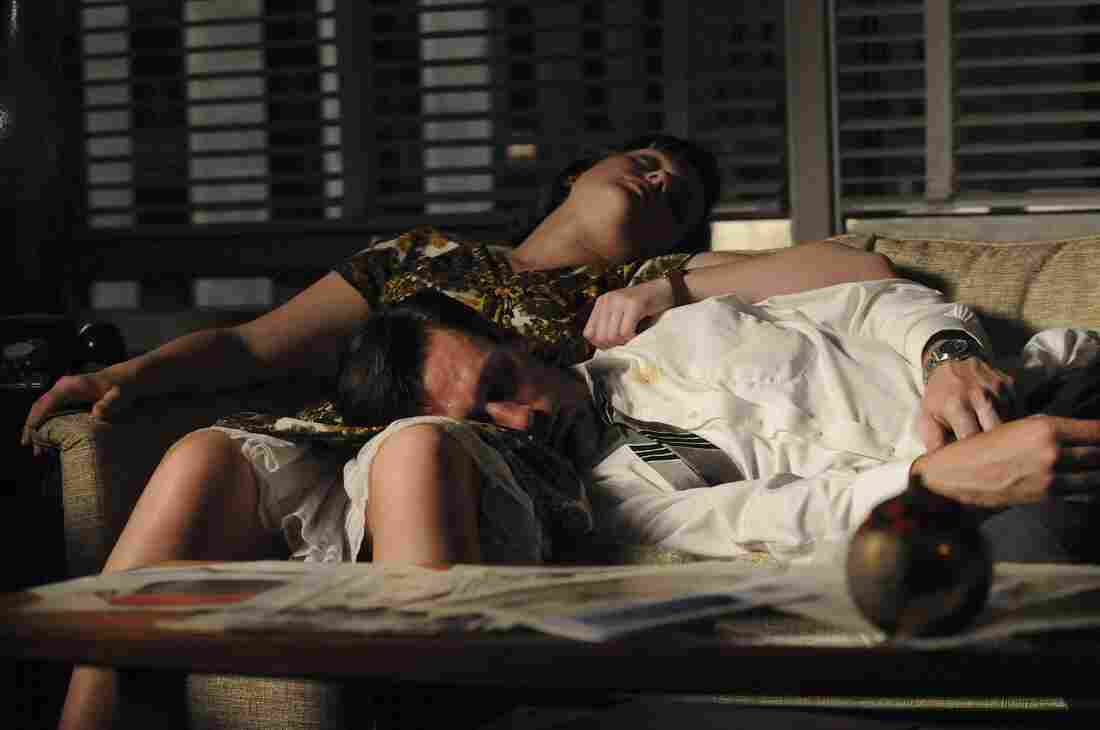 "The Suitcase" finds Don loudly vomiting in the SDCP bathrooms and pathetically grappling with the equally drunk adman Duck Phillips. Peggy winds up taking care of Don on the couch. AMC hide caption 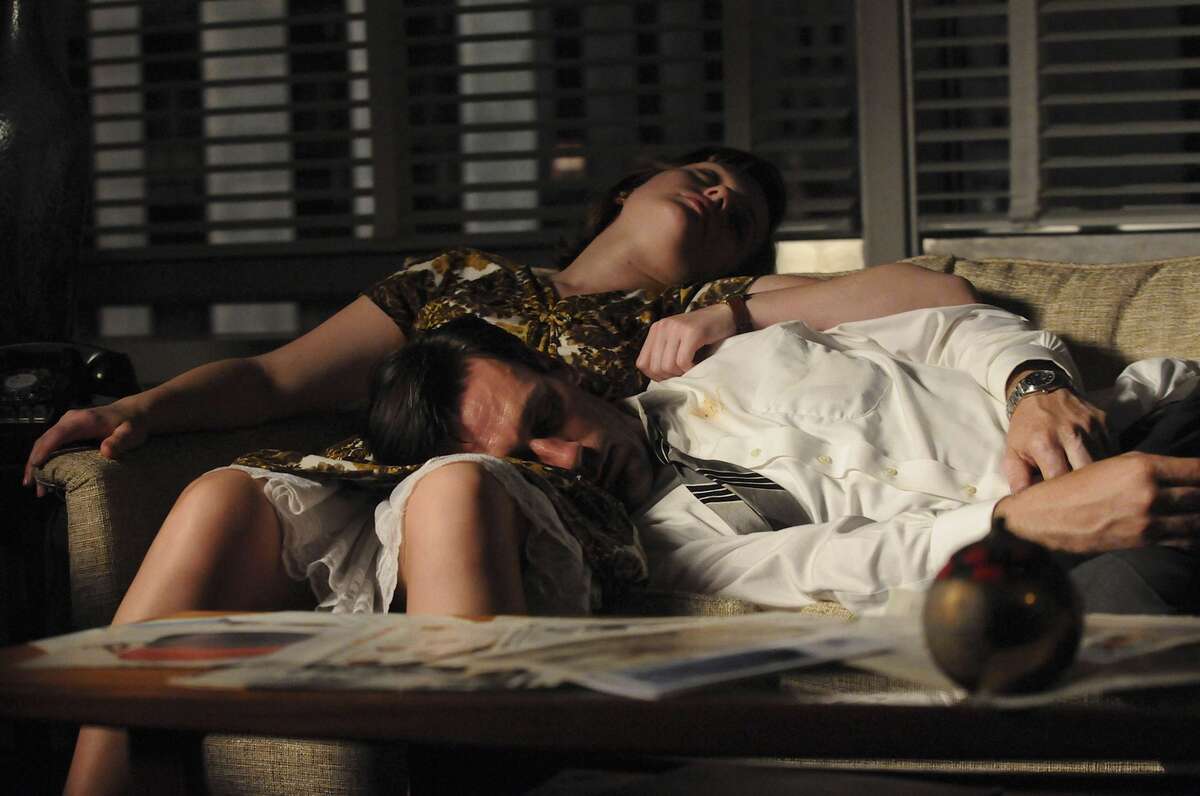 "The Suitcase" finds Don loudly vomiting in the SDCP bathrooms and pathetically grappling with the equally drunk adman Duck Phillips. Peggy winds up taking care of Don on the couch.

An interesting coda to all this: Jack Daniel's sponsored Mad Men's first season.

Before Season 1 had even premiered, a consumer group lodged a complaint against the show's producers with the Distilled Spirits Council. The group claimed that Jack Daniel's was violating industry codes that prohibited alcohol marketing, as well "depictions of irresponsible drinking, overt sexual activity or sexually lewd images." (This may all seem a little Prohibition-ish to us sitting here in bright, breezy 2015, but it had only been 11 years since the liquor industry dropped a 48-year-old voluntary ban on broadcast advertising that was born precisely out of such fears.) 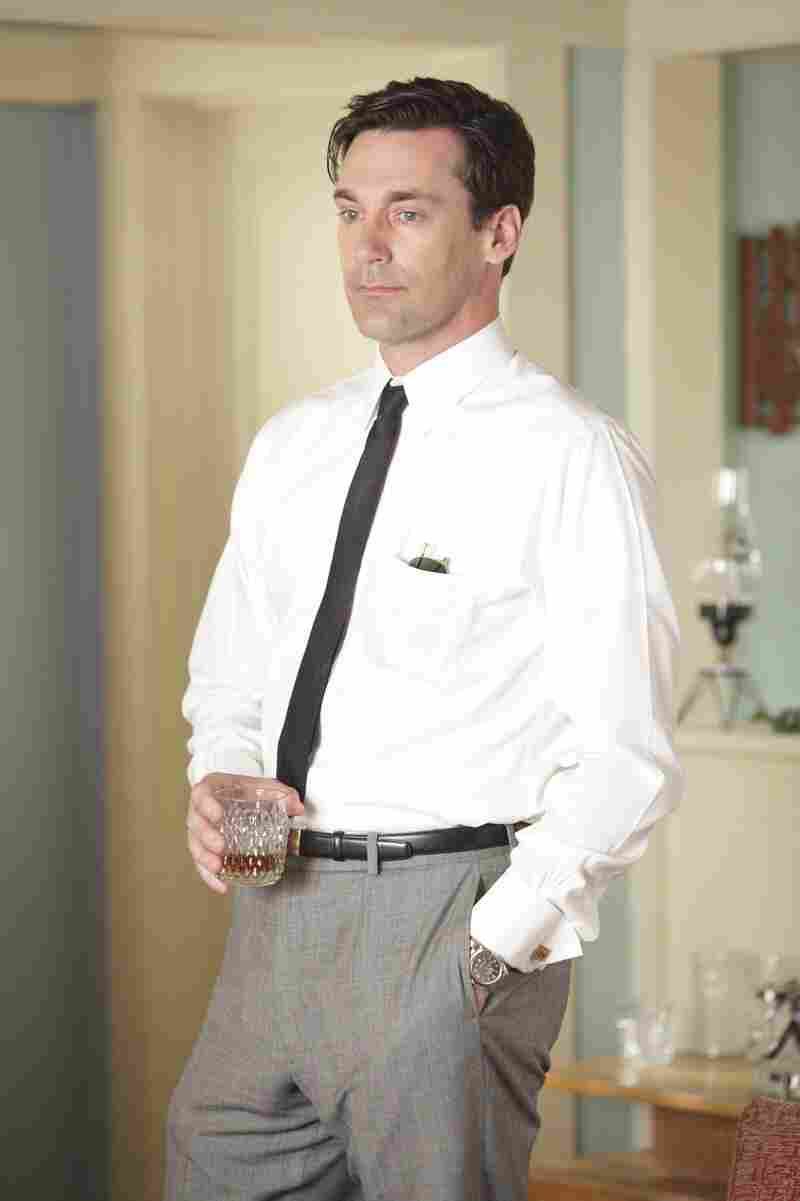 Given the indelible association with cocktail culture that Mad Men would go on to acquire in the public imagination, it's interesting to read the defense Weiner offered at the time.

"I'm trying to tell a story about that time. It's not done for glamour. People drank more and all the time. They drank in their cars, at work, in the morning at work," he said.

Surely, that's more a description of an era with a worrying drinking problem than a lifestyle to emulate when ordering Manhattans? Here was someone unequivocally telling his audience (and the liquor brand so keen to align itself with the show) that the story Mad Men was about to tell would not be what it seemed. But it looked so good!

So, almost eight years later, we know our show about a sophisticated Old Fashioned drinker was a tragedy all along. But if there's one thing at which humans excel, it's overlooking the uglier elements of something for the parts that look, well, better.

If we're still ordering those Old Fashioneds and thinking, "How very Don Draper of us," I'd guess we're choosing to remember the Don we first met in Season 1. Or, perhaps, despite everything, we fans just aren't watching Mad Men as closely as we think.

Carly Severn is the social media specialist for KQED in San Francisco. A version of this story first appeared on KQED's Bay Area Bites blog.