Accessibility links
Tea Tuesdays: How Tea + Sugar Reshaped The British Empire : The Salt When tea met sugar, they formed a power couple that altered the course of history. It was a marriage shaped by fashion, health fads and global economics. And it doomed millions of Africans to slavery. 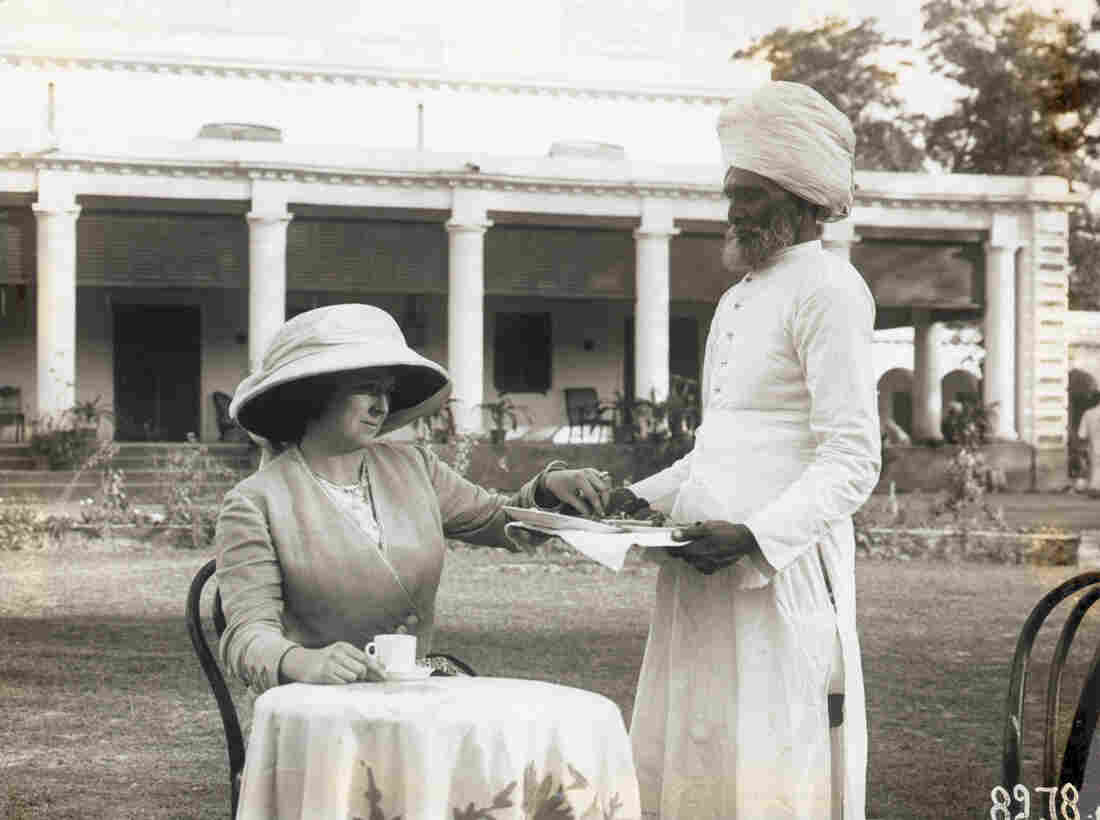 A Hindu servant serves tea to a European colonial woman in the early 20th century. The British habit of adding tea to sugar wasn't merely a matter of taste: It also helped steer the course of history. Underwood & Underwood/Corbis hide caption 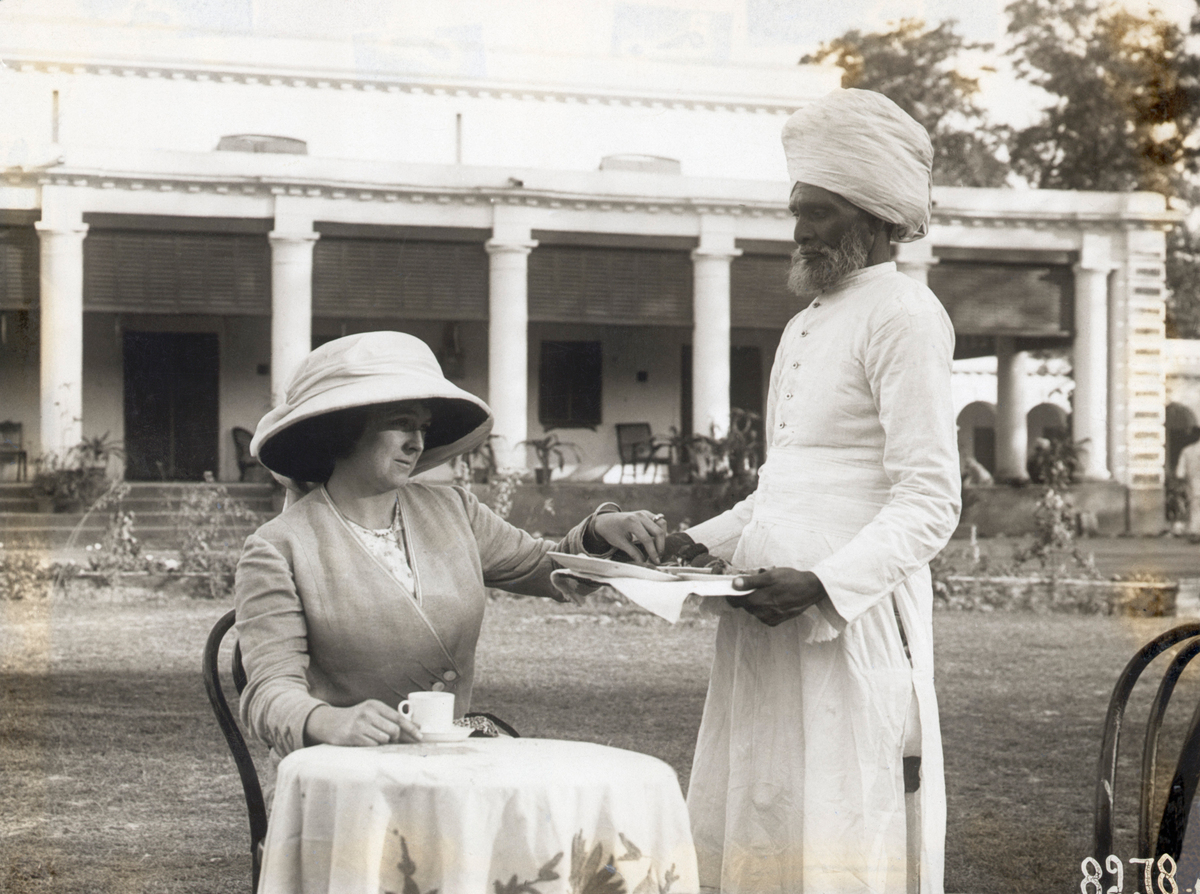 A Hindu servant serves tea to a European colonial woman in the early 20th century. The British habit of adding tea to sugar wasn't merely a matter of taste: It also helped steer the course of history.

Coffee and tea both landed in the British isles in the 1600s. In fact, java even got a head start of about a decade. And yet, a century later, tea was well on its way to becoming a daily habit for millions of Britons — which it remains to this day.

So how did tea emerge as Britain's hot beverage of choice?

The short answer: Tea met sugar, forming a power couple that altered the course of history. It was a marriage shaped by fashion, health fads and global economics. And the growing taste for sweetened tea also helped fuel one of the worst blights on human history: the slave trade.

The Princess And The Tea 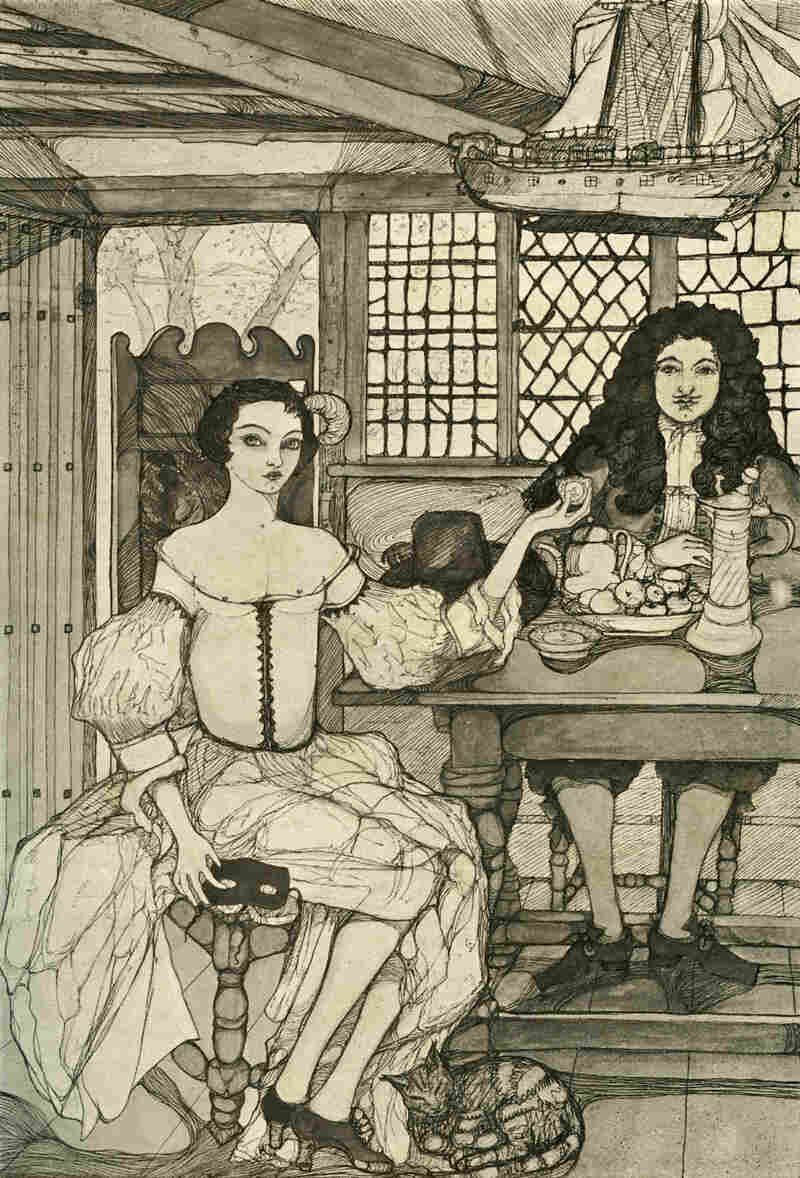 Catherine of Braganza was an early celebrity endorser of tea. After she wed Charles II, the fad for tea took off among the British nobility. Kitty Shannon/Corbis/Lebrecht Music & Arts hide caption 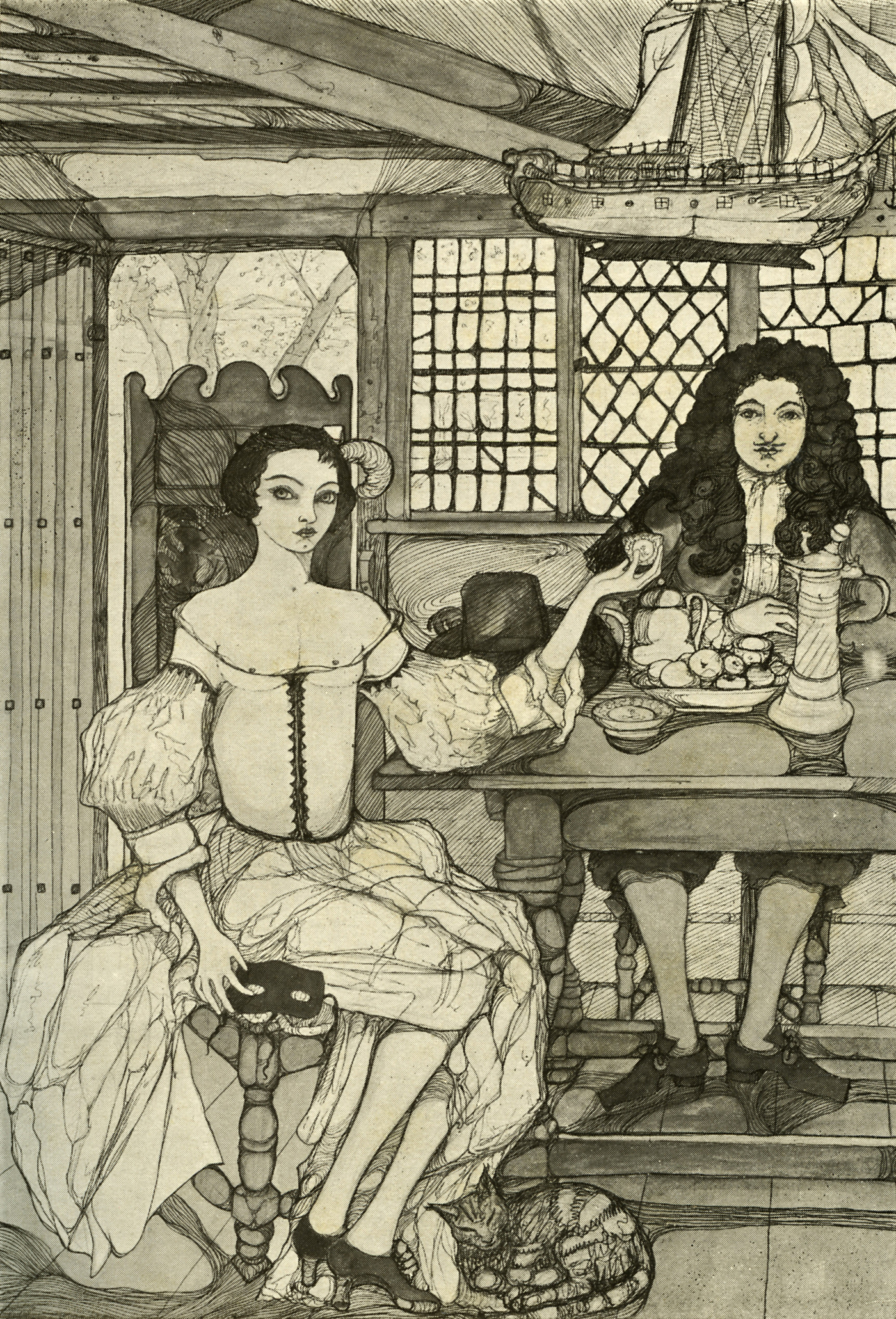 Catherine of Braganza was an early celebrity endorser of tea. After she wed Charles II, the fad for tea took off among the British nobility.

Tea was practically unknown in Europe until the mid-1600s. But in England, it got an early PR boost from Catherine of Braganza, a celebrity who became its ambassador: The Portuguese royal favored the infusion, and when she married England's Charles II in 1662, tea became the "it" drink among the British upper classes. But it might have faded as a passing fad if not for another favorite nibble of the nobility: sugar.

In the 1500s and 1600s, sugar was the "object of a sustained vogue in northern Europe," historian Woodruff Smith wrote in a 1992 paper.

Sugar was expensive and relatively rare, making it a perfect object of conspicuous consumption for status-chasing elites. Shaped into elaborate sculptures, mixed into wines, sprinkled on tarts and on glazed roasted meats — sugar was a much noted feature of upper-class life, says Smith, a professor emeritus at the University of Massachusetts, Boston who has studied the history of consumption. Cookbooks of the late 16th and early 17th century even treated sugar as a sort of drug to help balance the "humors" — energies that were believed to affect health and mood.

Then came the backlash: In the late 1600s, doctors started warning about the perils of sugar — it was blamed (correctly) for rotting teeth and (incorrectly) causing gout, among other ills — and it began to fall out of style among the rich and fabulous, Smith tells The Salt. Suddenly, sugar was the demon du jour. By around 1700, the word on sugar was no longer ostentation but moderation. 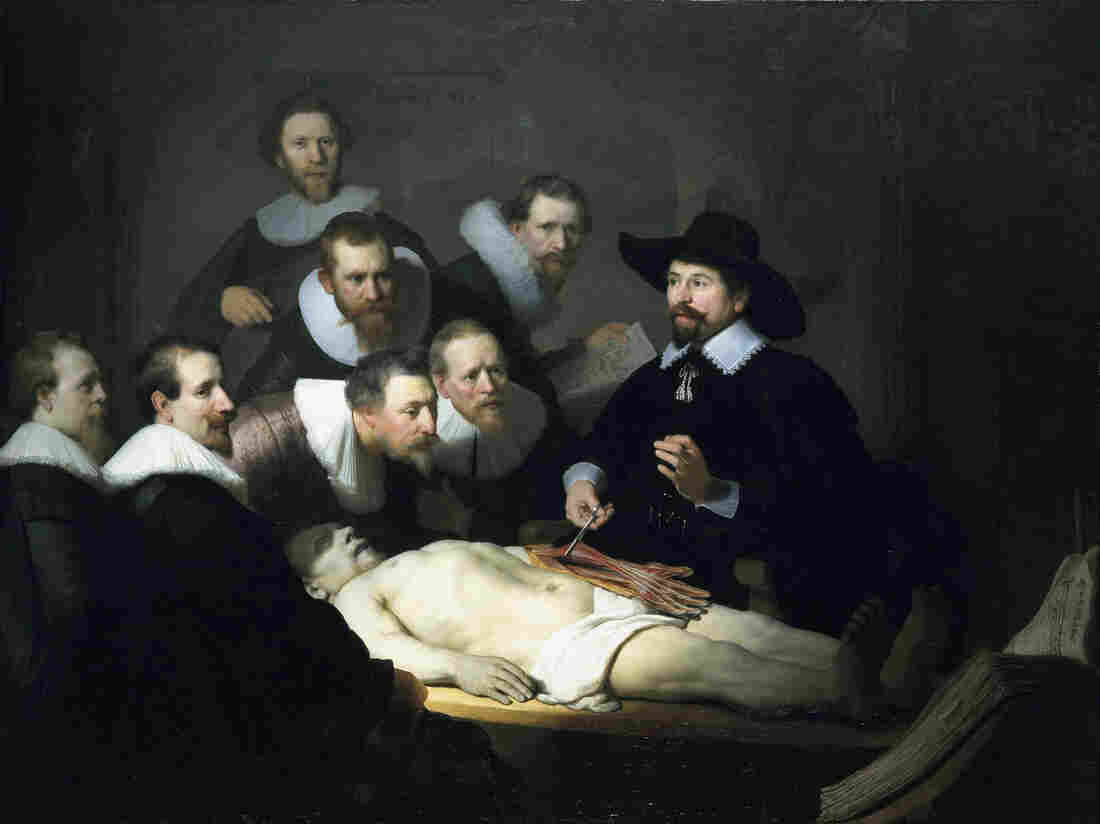 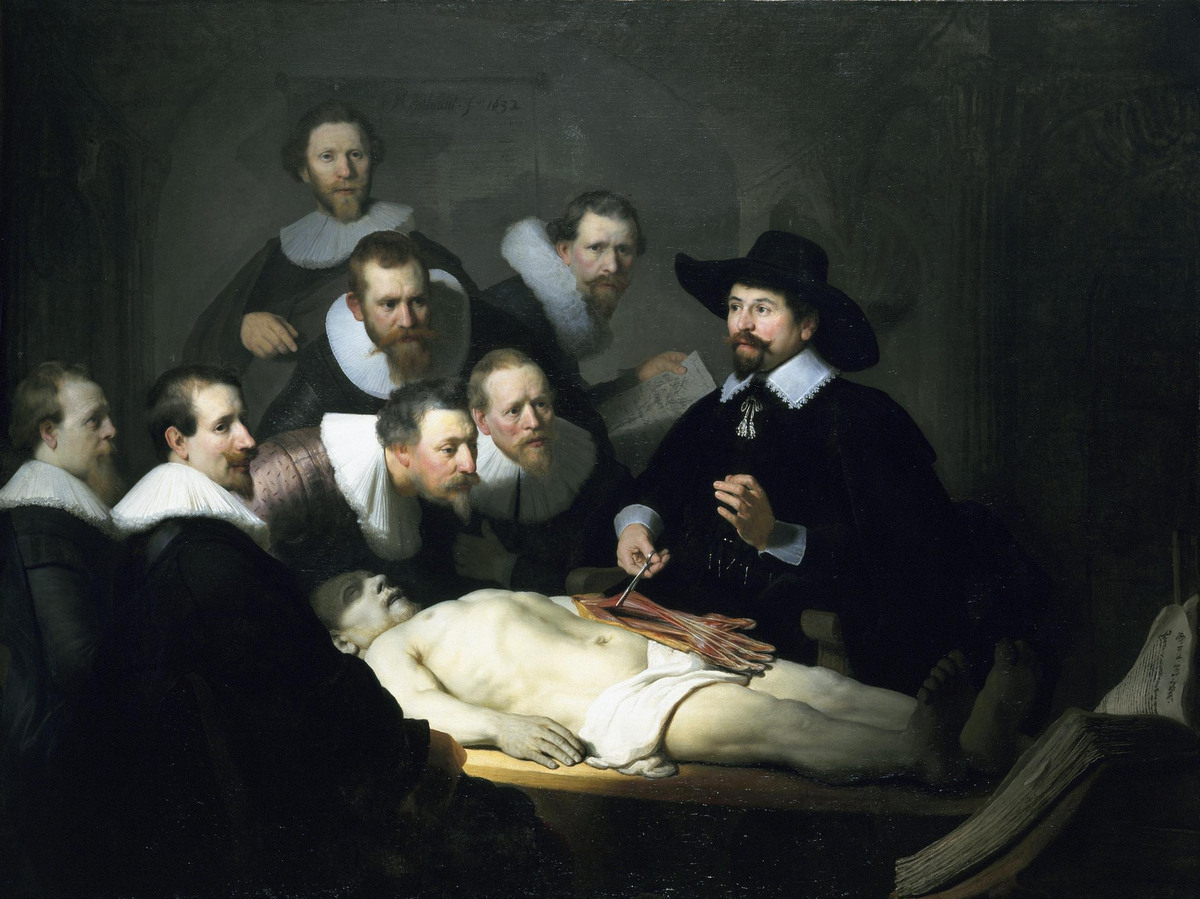 Meanwhile, lots of people were writing about the health benefits of tea, Smith says — including Nicholaes Tulp, a famed, well-connected Dutch physician immortalized in Rembrandt's painting The Anatomy Lesson. (Perhaps not coincidentally, Smith notes, Tulp "probably served on the board of directors of the Dutch East India Company" — which was, of course, importing tea.) Some enthusiasts suggested tea could induce the "constant sluicing of the body by drinking tens or hundreds of cups daily," Woodruff writes. Tea detox, anyone?

It turns out that self-help books were popular back then, too, and one of the most influential practitioners of the form was an English writer named Thomas Tryon, who had lots of theories on nutrition. (His followers included a young Benjamin Franklin.)

Tryon had a love-hate relationship with sugar. He'd been to plantations in the West Indies and was horrified by the system of slavery under which sugar cane was grown. But he also believed that anything that made people feel as good as sugar does must have some intrinsic health value. A dollop of sugar in a nonalcoholic, herbal infusion was a good way to get a hit of sweetness without going overboard, he thought. While Tryon didn't specify which infusion to use for this healthful concoction, "tea was the most obvious one," Smith says.

Such health notions, Smith says, help explain why, by the 1720s and 1730s, the custom of taking tea with sugar had taken hold among the British upper and middle classes.

The Birth Of A Global Economy

Interestingly, Smith notes, there's evidence that much of the same health claims about tea — that it cleared the head and improved spirits, without the debauchery of alcohol — were also being made about coffee around the turn of the 18th century. But coffee came from countries like Yemen and Eritrea — "places beyond European control and with little capacity to expand production," Smith writes. So when demand for coffee rose, prices did, too.

Tea, on the other hand, came from China — which had in place a sophisticated commerce system that could respond quickly to rising demand, Smith says. That demand was coming from the British and Dutch East India companies, which were already in China buying spices, silks and other goods for trade. As interest in tea grew back home, Smith says, the companies were in good position to ship large, reliable quantities at affordable prices "and therefore make tea a popular fad — and beyond a fad."

"What you're seeing is the global economy being constructed," Smith says. "It's these two companies as the vanguard of modern capitalism."

As Lord Beckett, the villainous, tea-and-sugar-sipping agent of the British East India Company in the Pirates of Caribbean movies might have put it, "it's just good business." (Such good business, of course, that, in the 19th century, the company went on to steal the secrets of tea production from China to establish a tea empire in India.)

Fuel For The Industrial Revolution

Tea and sugar proved good for business in another sense: as a cheap source of calories for the working classes.

Beer and cider had long been the drink of choice for the working poor, notes food historian Rachel Laudan. With good reason: The drinks were calorific, and the alcohol was mildly analgesic — both necessary when your days were filled with grinding labor. "Of course, that came at the cost of alertness," Laudan says.

But as the Industrial Revolution got underway beginning in the mid-1700s, the working classes gave up the plow and headed to the factory, where showing up tipsy wasn't exactly a way to get ahead.

Tea sweetened with a strong dose of sugar was an affordable luxury: It gave workers a hit of caffeine to get through a long slog of a day, it provided plentiful calories, and it offered the comfort of warmth during a meal that otherwise often consisted only of bread.

Paying For Empire In Tea And Sugar

The rise of tea and sugar as a power duo was a boon for British government coffers. By the mid-1700s, tea imports accounted for one-tenth of overall tax income, says Laudan, a visiting professor at the University of Texas, Austin. 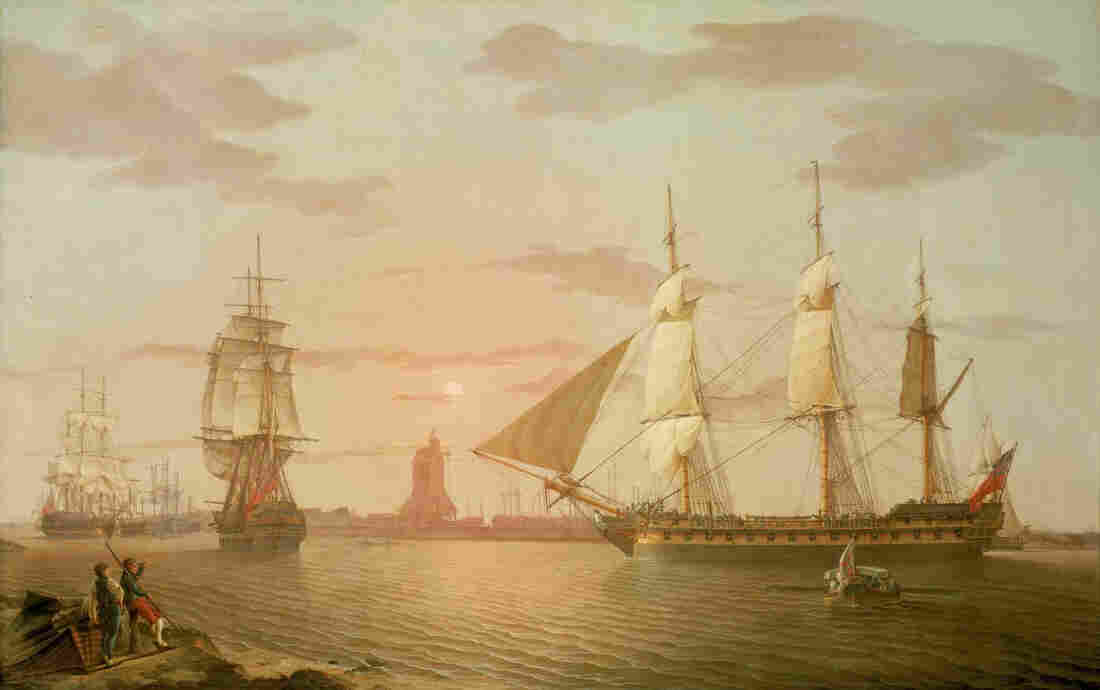 The Warley, a ship belonging to the British East India Company at the turn of the 19th century Robert Salmon/Wikimedia hide caption 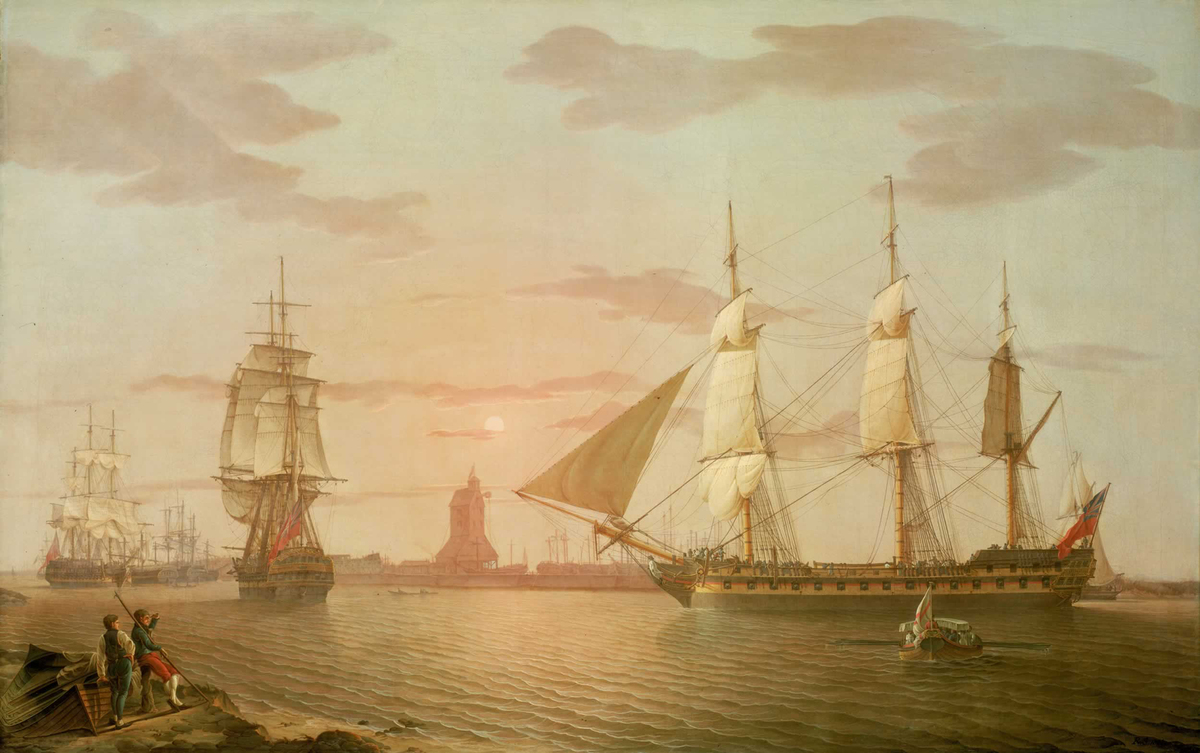 The Warley, a ship belonging to the British East India Company at the turn of the 19th century

As for sugar? According to one analysis, Laudan notes, in the 1760s, the annual duties on sugar imports were "enough to pay to maintain all ships in the navy." A great deal of that sugar, historians say, was being stirred into tea.

Those tea-and-sugar monies helped supply the British navy with better foodstuffs, Laudan says, including vegetables when available. And that navy was key to spreading British might across the globe.

"It's this dominance of the British navy that allows Britain to become the major colonial power in the 19th century," Laudan tells The Salt.

But all this growth came at a terrible human price.

As Smith notes, the fad for tea came in just as sugar was under attack and had started to fall out of favor. By creating a new and lasting use for this sweetener, tea helped buoy demand for sugar from the West Indies. "And indeed, it continued to support the expansion of slavery there," Smith says.

So the next time you find yourself sipping a nice warm cup, consider how something as simple as a drink can shape events half a world away. Even today, our edibles aren't just about appetite — the palatable is political.