Accessibility links
In Korea, Spam Isn't Junk Meat — It's A Treat : The Salt It's a gelatinous slab of pork, salt and starch — and in fancy packaging, it's a popular holiday gift. So how did South Korea become the world's No. 2 Spam consumer? Blame it on the war.

In Korea, Spam Isn't Junk Meat — It's A Treat

In Korea, Spam Isn't Junk Meat — It's A Treat

The advertisement begins with a breezy acoustic-guitar jingle and a young woman peering into soft light. Its message is clear: The product you're about to see is special.

Not the unsolicited email, but the canned, processed pork product introduced during the 1930s. South Koreans eat lots of Spam, it turns out.

The country of 50 million people is the second-largest consumer of Spam in the world, devouring roughly half as much as the United States, which has six times as many residents.

The dish has been a staple in supermarkets here for years. Customers buy it in bulk packages and as fancy holiday gift boxes. They eat it fried in egg batter, atop steaming rice or with kimchi (fermented vegetables) wrapped in gim (seaweed), among many recipes. Spam is also an ingredient in a popular spicy stew.

"It's a luxury that really has kind of cemented itself in Korean society," says Daniel Gray, a Korean-American who is president of Delectable Travels, a food tour company in Seoul. "It's iconic here."

"Luxury" isn't typically a word Americans associate with Spam, a gelatinous slab of pork shoulder, ham, salt and potato starch. But its revered status here dates back to the 1950s, when U.S. soldiers introduced it on the peninsula during the Korean War.

Spam and other canned foods — such as beans and corn — were sought out by some Koreans, whose postwar food supplies ran low. By the end of the 1980s, Spam had become a popular part of the Korean diet, especially as the local meat industry expanded and the product became easier to find.

Today, it's not just a nostalgic dish sought out by older generations whose palates were shaped during the conflict. Sales are up 30 percent here in the past five years, according to Minnesota-based Hormel Foods, which owns the brand. 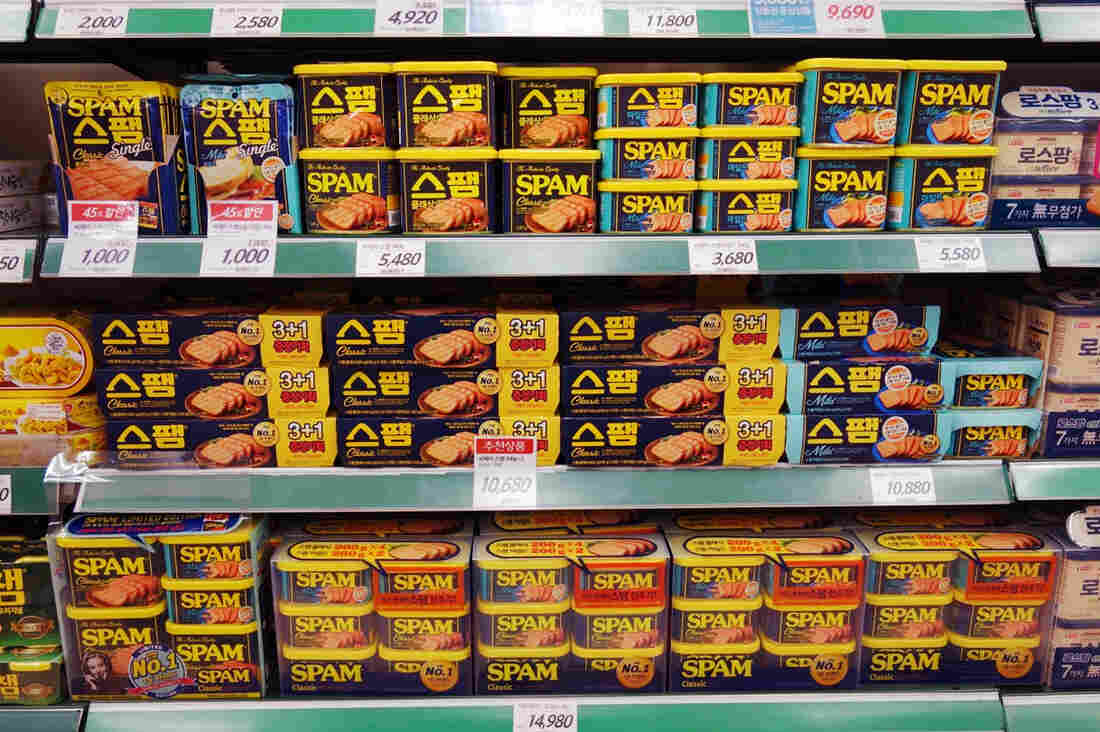 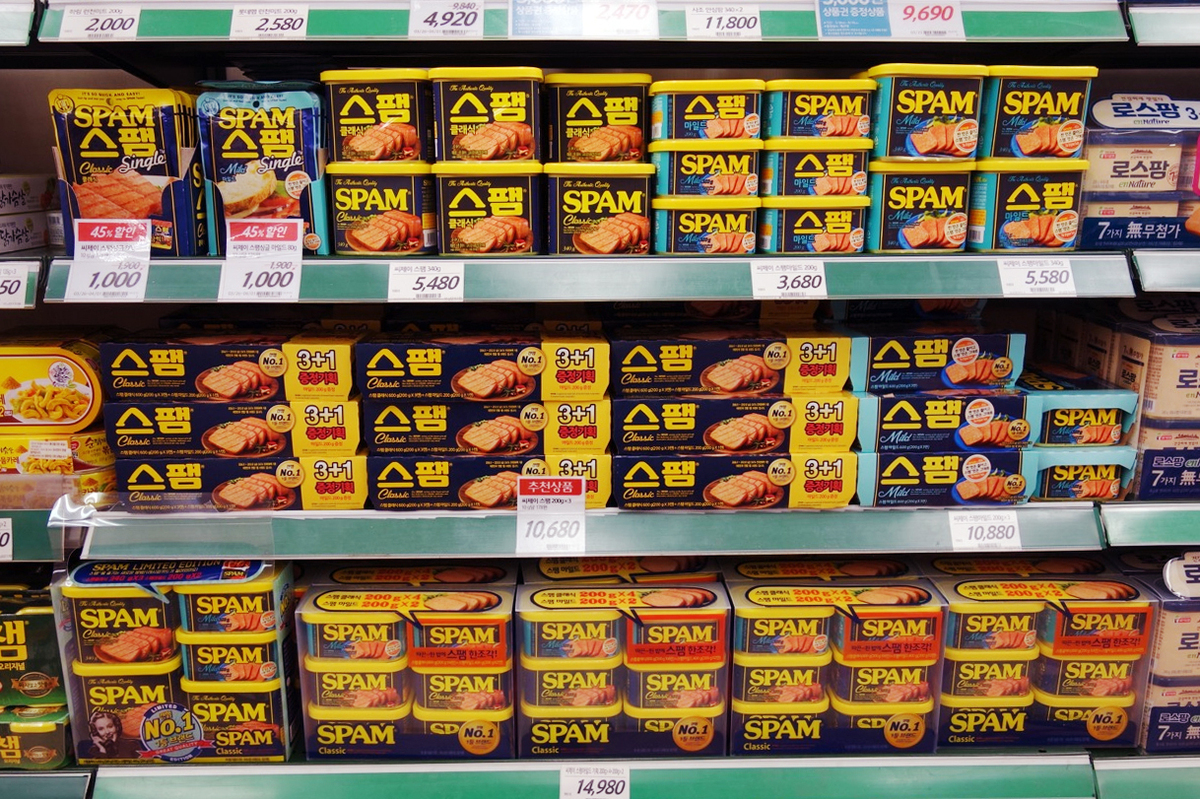 Spam is a staple in South Korea's supermarkets.

Supermarkets devote aisle-end displays to Spam and its familiar blue and yellow tin. A local Hormel licensee, CJ CheilJedang Corp., manufactures the product here, printing the logo on one side with characters from the Korean alphabet, known as Hangul.

At that price, many Koreans view it as a tasty side dish, especially as processed foods go. "It's seen as a high-end luncheon meat," says Cho Hye-Jin, who works in Seoul. "Out of the variety of luncheon meats available in Korea, Spam is probably the best quality."

Cho and Park Jin-Hong, both construction consultants, say they most often see their peers consume Spam along with soju — a clear alcoholic beverage made with rice, potatoes or other starches. Park says Spam isn't a staple of his diet — "it's too salty" — but he does enjoy it.

He said he prefers a low-sodium version, one of two varieties (along with the original) sold in Korea. Customers here can also buy prepackaged Spam products, such as fried rice, in frozen-food aisles.

South Koreans aren't the only Asians who use Spam in traditional meals. In the Philippines, for example, it's sometimes served in rellenong manok, a stuffed chicken dish. They're also not the first to adopt specialties introduced by the U.S. military.

Perhaps the most iconic Spam dish in South Korea is a spicy soup known as budae jjigae, or army stew. After the war, Koreans used U.S. Army rations — sometimes smuggled off military bases or donated by soldiers — to make the deep-red dish.

This concoction comes in many varieties. Restaurants use a mix of hot spices, noodles, Spam, sausage, beans, corn, green vegetables — even cheese. It has been called "pig stew," "soldier stew" and "Johnson's stew," the latter after our 36th president.

Chris Amoroso, an American, discovered budae jjigae a few years ago while teaching English here. He liked it so much that he created a video on YouTube explaining the dish's colorful history. "It's delicious," he tells viewers, sitting before a boiling pot.

"It is not a soup that one can eat often. It's so rich and probably not very healthy," he tells The Salt. "Americans should know that if they ever get a chance to go [to Korea], they should definitely try it."

While the soup is an ingrained part of the food culture here, seasonal gift boxes are still a big reason why Spam sales are so strong in South Korea. The gifts typically come in Spam-branded boxes, with as many as nine cans inside, along with other items, like cooking oil. Families exchange them during the traditional harvest holiday season, known as chuseok, in early fall, and the Lunar New Year. Bosses hand them out to employees.

These boxes represent more than half of Hormel's annual Spam sales on the peninsula, the company says — perhaps one reason for the slick advertisements promoting them in South Korea.

Later in the short video advertisement described above, the camera switches between enticing rice and noodle dishes, an elegant sandwich and multiple cans of Spam. One by one, the cans fill the gift box. The young woman returns and smiles into the camera. She later shyly tucks her hair behind an ear while looking down, as if pondering something special.

The music continues. "We have prepared the gift set with all our hearts," says the narrator. "Spam gift set — everyone knows what it's worth."

Gray, who lives in Seoul, believes he knows the product's value here, too.

"I always joke with guests who come to Korea, 'See, you could have packed a whole suitcase of Spam. You would have made a lot of friends."

Matt Stiles, who recently tried Spam in ramen noodles, is a former data editor at NPR and currently a Seoul-based freelance journalist. You can share your Spam stories with @stiles or @NPRFood.

A previous version of this story incorrectly referred to CJ CheilJedang Corp. as a subsidiary of Hormel. The company is a Hormel licensee.