Accessibility links
Is It Time For A Warning Label On Sugar-Loaded Drinks? : The Salt New legislation in California and New York proposes a label for sugary beverages. The label looks like the warning on cigarette packages, but the beverage industry has called it "misleading."

Is It Time For A Warning Label On Sugar-Loaded Drinks?

Is It Time For A Warning Label On Sugar-Loaded Drinks?

We've said it before, and we'll say it again: We consume a lot more sugar than is good for our health. Because of this, the next generation of Americans will struggle with obesity and diabetes more than any other. The most obvious culprit is the added sugar in sodas and other sugary beverages, like sports drinks or teas.

One idea public health advocates have floated to bring sugar consumption down is to tax beverages with more than a certain amount of added sugar. (Berkeley, Calif., and the Navajo Nation have managed to pass such legislation.) Another is to shrink the size of soda cups.

The latest idea is a warning label. Legislators in New York and in California are trying to emblazon sodas with a message that looks very similar to one you see on cigarette packages or alcohol bottles.

Its backers argue that beverages that contain added sugar and have 75 calories or more in one 12-ounce serving should have to bear the label.

"We're just saying if we know about these health problems it's also good for the consumer to know," Bill Monning, California's senate majority leader and author of the label bill, tells The Salt. "It might mitigate how often [consumers] would buy these products." 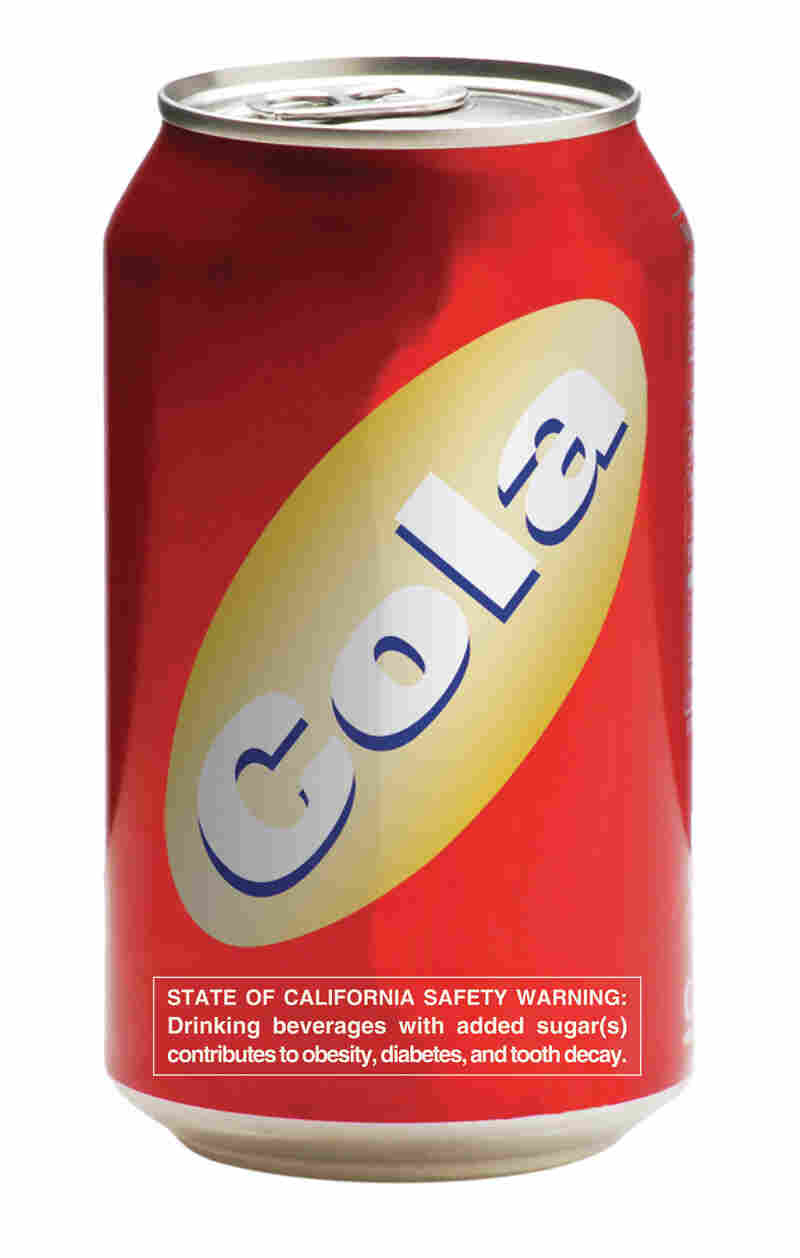 A mock-up of a warning label for sodas and sugary drinks proposed in California by public health advocates. California Center for Public Health Advocacy hide caption 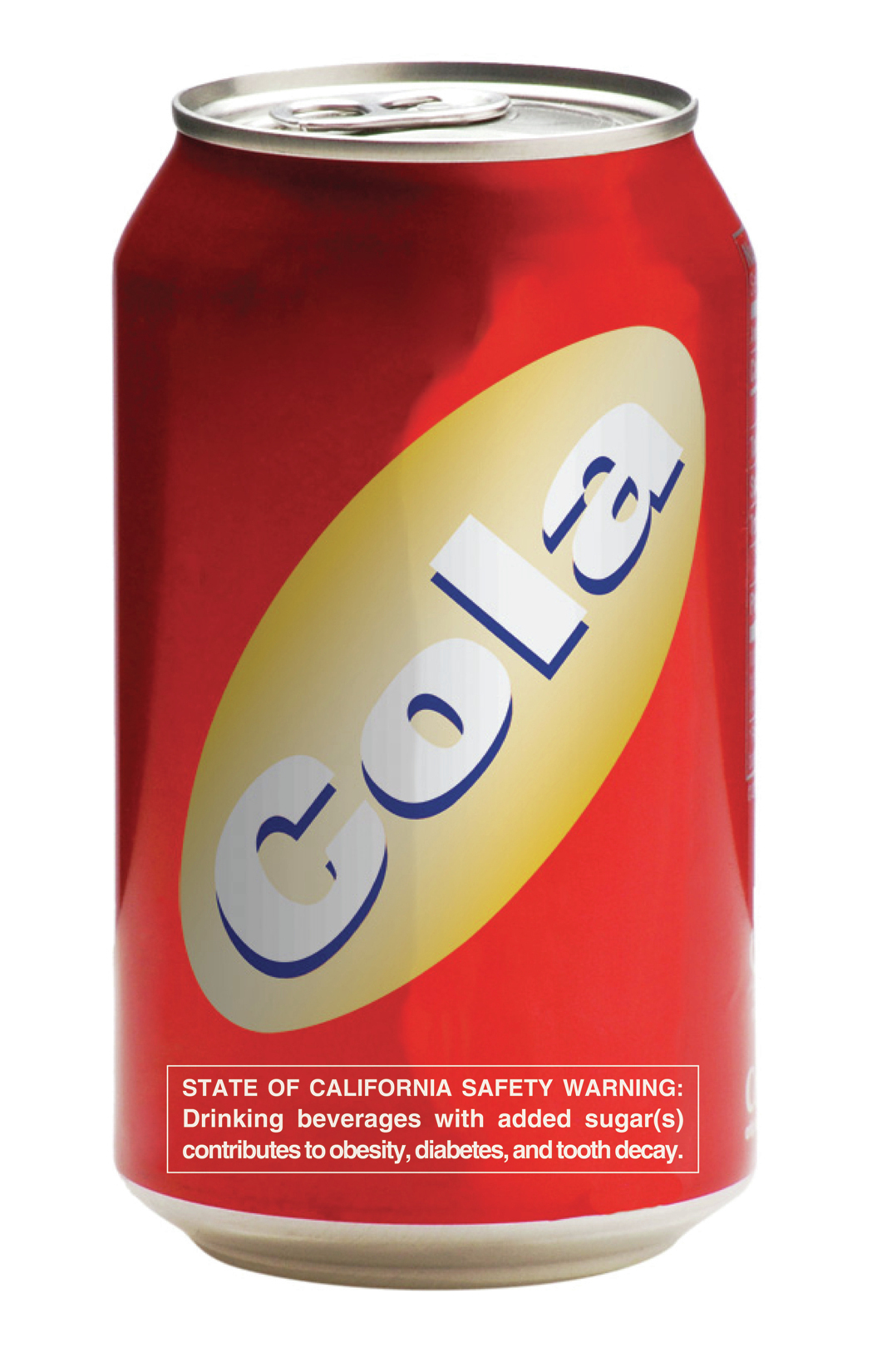 A mock-up of a warning label for sodas and sugary drinks proposed in California by public health advocates.

This is actually Monning's bill's second run through the California state legislature. Last year, it made it through the Senate, but got stymied in the state assembly.

Monning has also authored bills taxing sugary beverages in the past, but they never received the necessary two-thirds approval from each house for the soda tax bills to pass. The warning label bill, however, needs fewer votes to pass than a soda tax bill – just a majority in both the Senate and the assembly.

On the other side of the country, Jeffrey Dinowitz is trying to move a similar bill through the New York state assembly. He liked the idea of Bloomberg's super-sized drink ban, but that policy that was eventually overturned by a judge just before it took effect in 2013.

Dinowitz is more hopeful about the label bill because it seems more feasible.

"We're not banning anything, we're not telling anyone you can't have cups," Dinowitz says. "It's a simple warning."

Both Dinowitz and Monning say the labels they want look similar to the one that appeared on cigarette packages in 1965, the year after the Surgeon General released a warning that smoking causes lung cancer.

While lumping soda in the same category as cigarettes is sure to raise eyebrows, some argue that's how serious sugar-related problems like diabetes have become.

"One of the questions the beverage industry asks so commonly is 'Why are you picking on us?' " says Harold Goldstein, the executive director of the California Center for Public Health Advocacy, an organization focused on fighting obesity that sponsored the bill. "It's the liquid sugar thing. It's not the same as other products."

Goldstein says the body absorbs the liquid sugar in soda and other drinks much faster than the sugars in other foods, raising blood sugar levels in as little as 30 minutes. It's a lot easier to drink the teaspoons of sugar in a soda than it is to eat them. And the sugar doesn't make you feel full, the way that fat or protein might. "More and more I am thinking of these products as diabetes in a bottle," he says.

Regardless of whether sugary drinks and cigarettes deserve equal status as villains, Goldstein hopes to emulate the anti-tobacco campaign's success. The number of smokers in the U.S. has been declining steadily since the 1965 surgeon general's label appeared on the first cigarette packages.

Just like the anti-tobacco campaign, the anti-soda campaign will have to overcome resistance from the beverage industry. The American Beverage Association has already spent a lot to keep soda tax bills from gaining state approval.

And they're ready to fight the label bills.

"The beverage industry already provides consumer-friendly labels on the front of every can, bottle and pack we produce," American Beverage Association vice president William Dermody writes in an email to The Salt. "A misleading warning label that singles out one industry for complex health challenges will not change behaviors or educate people about healthy lifestyles."

But the bill seems to be gaining support from Democrats and Republicans alike: A California poll from fall 2014 shows that more than 60 percent of each party and non-partisan voters support the idea.

"It's really a libertarian solution: Give consumers the information and let them make the choice," says Goldstein. And given that soda companies now advertise with slogans like "Open Happiness" and "Live For Now", Goldstein says a mere warning label is completely justified.

Still, it's early days for the movement to reduce sugar consumption. Goldstein says that if you think of the anti-tobacco movement timeline, it's only about 1970 for the sugary beverage movement. It could be decades before we see a consistent decline in how much soda Americans drink.

"We're really at the beginning of warning consumers about these products," says Goldstein.