Accessibility links
Interview: Graham Holliday, Author Of 'Eating Vietnam' : The Salt Journalist Graham Holliday moved to Vietnam in the '90s and immersed himself in the culture through food. That meant getting "a little bit" poisoned, finding the best Bún chả — and meeting his wife. 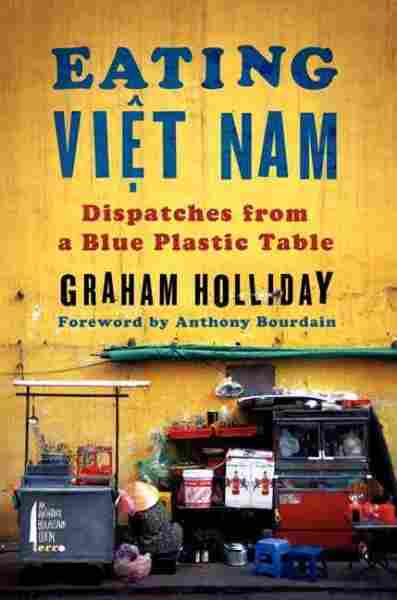 Dispatches from a Blue Plastic Table

When English journalist Graham Holliday got tired of his office job in the U.K., he knew he wanted a change — a big one.

So he packed up and moved to Asia, first to Korea to teach English and ultimately, to the place that would be his home for nine years: Vietnam. As soon as he arrived, he was determined to immerse himself in Vietnamese culture — and for him, that meant food.

Holliday chronicled his adventures on his blog, Noodle Pie, and in his new memoir, Eating Vietnam: Dispatches from a Blue Plastic Table, a humorous and nuanced exploration of the country's food and culture. His advice on how to best to tackle Vietnam's vibrant street food scene?

"You just kind of take chances. You just literally follow your nose," Holliday tells NPR's Rachel Martin. "Fortunately, Vietnamese, the language, you can read it. So you can have a pretty good stab at what it is you're going to be eating. After that, obviously, you get a certain number of favorite dishes, and you might want to try a particular dish in many different places."

Indeed, Holliday's sampling of one dish — Bún chả, a noodle and pork ball in fish sauce – took him to "about 25 or 30 different places" in Hanoi, he says, "just to kind of try and find the best one you possibly could. And it was a lot of fun, obviously, to try these things."

While Vietnamese cuisine boasts many fabulous dishes, some of Holliday's gastronomical explorations took a turn toward the extreme. That includes seeking out foods like pig's uterus and intestines — "they're fairly common drinking foods. I think it might kind of help with the digestion of beer, possibly, I'm not really sure."

He also sampled alcohol made from cobra body parts. "And the next day I really did not feel well," he recalls. "I think the way I described in the book as feeling like there's a fire through your arteries. A friend of mine, the next day – I was quite worried and he said, 'Oh don't worry, you're just poisoned a little bit. It's OK, you'll get over it.' He was so blasé, it kind of gave me confidence that it's maybe actually not so serious after all."

Holliday's wanderings didn't just introduce him to Vietnam's culinary bounty; they also led him to his now-wife, Sophie.

But if he had to pick a quintessential Vietnamese dish, Holliday would nominate called Bánh tráng phơi sương – which translates to "dew-encrusted rice papers" -- a simple boiled pork, sliced very thinly and served with rice papers left out over night to collect the morning dew. You eat it with pickles, sometimes fresh bean sprouts and what he calls the "pièce de résistance" – a mountain of seven to 12 different herbs and greens.

"And so, you take some herbs, you take some meat, you wrap it together in the rice paper, and then you dip it in the ever-present nước mắm, the fish sauce, and that's it. So the flavor is purely pork, all those herbs and the fish sauce. And to me, that is the simplest but the most beautiful dish in Vietnam."