Accessibility links
Eating To Break 100: Longevity Diet Tips From The Blue Zones : The Salt The centenarians living in Blue Zones aren't drinking Ensure or eating chocolate ice cream. Instead, many are drinking wine, and all are eating beans. But living to 100 isn't just about diet. 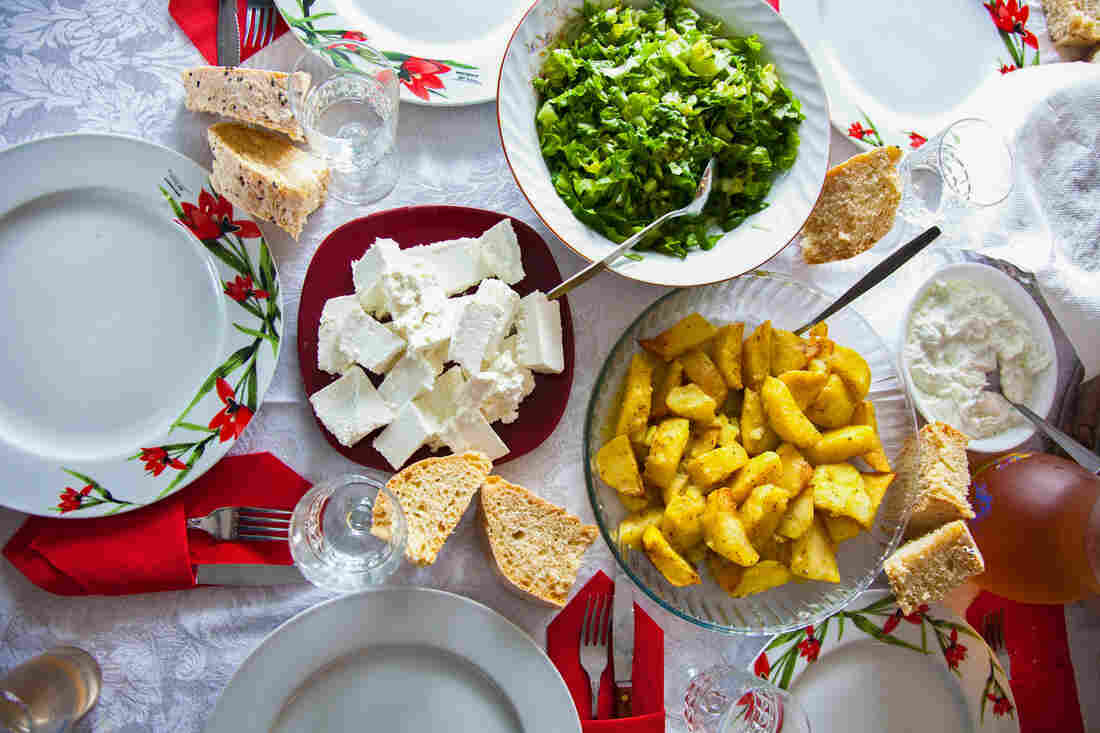 A distinct version of the Mediterranean diet is followed on the Blue Zone island of Ikaria, Greece. It emphasizes olive oil, vegetables, beans, fruit, moderate amounts of alcohol and low quantities of meat and dairy products. Gianluca Colla/Courtesy of Blue Zones hide caption 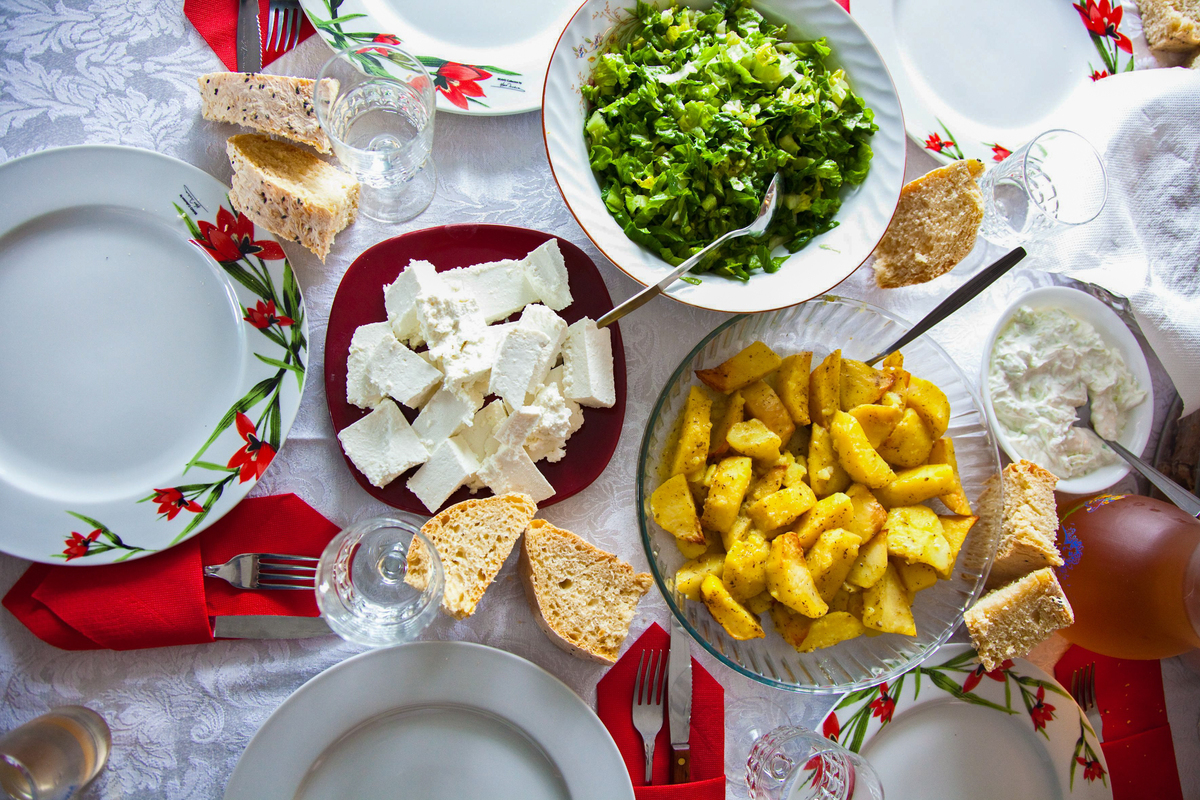 A distinct version of the Mediterranean diet is followed on the Blue Zone island of Ikaria, Greece. It emphasizes olive oil, vegetables, beans, fruit, moderate amounts of alcohol and low quantities of meat and dairy products.

Want to live to be 100? It's tempting to think that with enough omega-3s, kale and blueberries, you could eat your way there.

But one of the key takeaways from a new book on how to eat and live like "the world's healthiest people" is that longevity is not just about food.

The people who live in the Blue Zones — five regions in Europe, Latin America, Asia and the U.S. researchers have identified as having the highest concentrations of centenarians in the world — move their bodies a lot. They have social circles that reinforce healthy behaviors. They take time to de-stress. They're part of communities, often religious ones. And they're committed to their families.

Eat Plants And Prosper: For Longevity, Go Easy On The Meat, Study Says

But what they put in their mouths, how much and when is worth a close look, too. And that's why Dan Buettner, a National Geographic explorer and author who struck out on a quest in 2000 to find the lifestyle secrets to longevity, has written a follow up to his original book on the subject. The new book, called The Blue Zones Solution, is aimed at Americans, and is mostly about eating.

Why should we pay attention to what the people in the relatively isolated Blue Zone communities eat? Because, as Buettner writes, their more traditional diets harken back to an era before we Americans were inundated with greasy fast food and sugar. And to qualify as a Blue Zone, these communities also have to be largely free of afflictions like heart disease, obesity, cancer and diabetes. So clearly they're doing something right.

You can get the backstory in this excerpt of the original book, which was published in 2008. But in a nutshell, Buettner in 2004 rounded up a bunch of anthropologists, demographers, epidemiologists and other researchers to travel around the world to study communities with surprisingly high percentages of centenarians. He and the scientists interviewed hundreds of people who'd made it to age 100 about how they lived, then did a lot of number crunching to figure out what they had in common.

A year after that book was published, the team announced they'd narrowed it down to five places that met all their criteria. They gave them official Blue Zone status: Ikaria, Greece; Okinawa, Japan; Ogliastra Region, Sardinia; Loma Linda, Calif.; and Nicoya Peninsula, Costa Rica.

In the new book, which was released April 7, Buettner distills the researchers' findings on what all the Blue Zones share when it comes to their diet. Here's a taste:

The book also features "top longevity foods" from each Blue Zone, some of which we found pretty intriguing.

You may remember this Blue Zone from Buettner's wonderful 2012 New York Times Magazine article entitled "The Island Where People Forget To Die."

As we've reported, health researchers have long praised the Mediterranean diet for promoting brain and physical health and keeping chronic diseases at bay. So what makes the diet of the people on Ikaria, a small island in the Aegean Sea, so special?

"Their tradition of preparing the right foods, in the right way, I believe, has a lot to do with the island's longevity," writes Buettner.

And "what set it apart from other places in the region was its emphasis on potatoes, goat's milk, honey, legumes (especially garbanzo beans, black-eyed peas, and lentils), wild greens, some fruit and relatively small amounts of fish."

Ikaria has a few more "top longevity foods:" feta cheese, lemons and herbs like sage and marjoram that Ikarians use in their daily tea. What's missing that we usually associate with Greece? Lamb. The Ikarians do eat some goat meat, but not often.

Buettner calls the islands of Okinawa a kind of "Japanese Hawaii" for their laid-back vibe, beaches and fabulous weather. Okinawa also happens to have one of the highest centenarian ratios in the world: About 6.5 in 10,000 people live to 100 (compare that with 1.73 in 10,000 in the U.S.)

Centenarians on Okinawa have lived through a lot of upheaval, so their dietary stories are more complicated than some of the other Blue Zones. As Buettner writes, many healthful Okinawan "food traditions foundered mid-century" as Western influence brought about changes in food habits. After 1949, Okinawans began eating fewer healthful staples like seaweed, turmeric and sweet potato and more rice, milk and meat.

Still, Okinawans have nurtured the practice of eating something from the land and the sea every day. Among their "top longevity foods" are bitter melons, tofu, garlic, brown rice, green tea and shitake mushrooms.

On this beautiful island in the middle of the Mediterrean, the ratio of centenarian men to women is one to one. That's quite unusual, because in the rest of the world, it's five women to every one man who live that long. 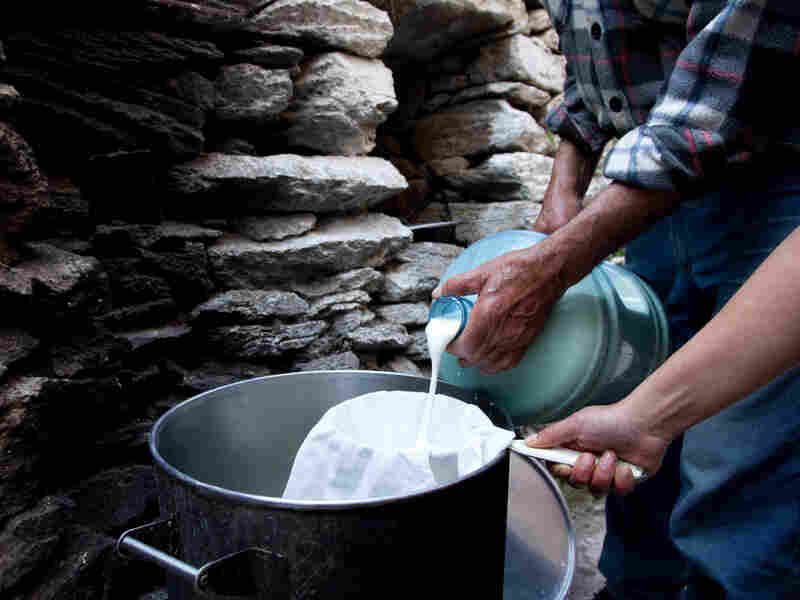 The sharp pecorino cheese made from the milk of grass-fed sheep in Sardinia, has high levels of omega-3 fatty acids. Gianluca Colla/Courtesy of Blue Zones hide caption 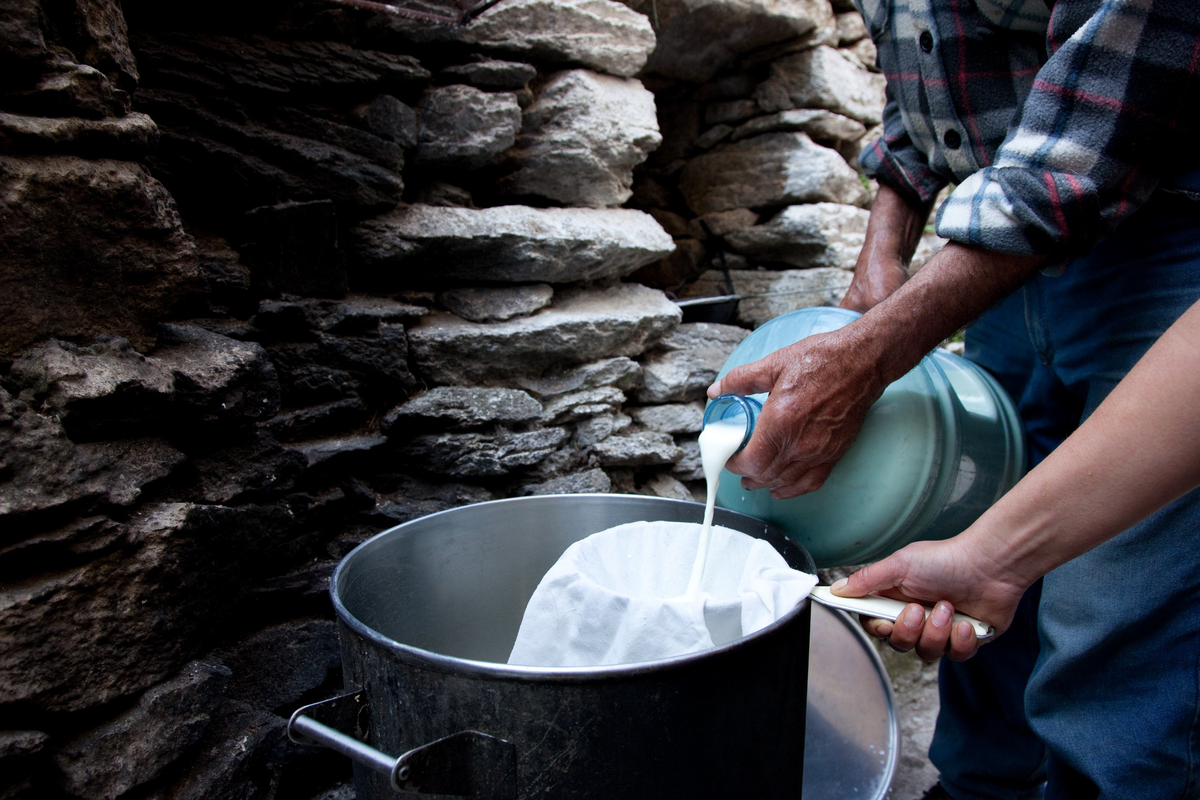 The sharp pecorino cheese made from the milk of grass-fed sheep in Sardinia, has high levels of omega-3 fatty acids.

Buettner writes that the Sardinians explain their exceptional longevity with their assets such as "clean air," "locally produced wine," or because they "make love every Sunday." But when Buettner brought along a researcher to dig deeper, they found that pastoralism, or shepherding livestock from the mountains to the plains, was most highly correlated with reaching 100.

So what are those ancient Sardinian shepherds eating? You guessed it: goat's milk and sheep's cheese — some 15 pounds of cheese per year, on average. Also, a moderate amount of carbs to go with it, like flat bread, sourdough bread and barley. And to balance those two food groups out, Sardinian centenarians also eat plenty of fennel, fava beans, chickpeas, tomatoes, almonds, milk thistle tea and wine from Grenache grapes.

There's a Blue Zone community in the U.S.? We were as shocked to learn this as you may be. Its members are Seventh-day Adventists who shun smoking, drinking and dancing and avoid TV, movies and other media distractions. 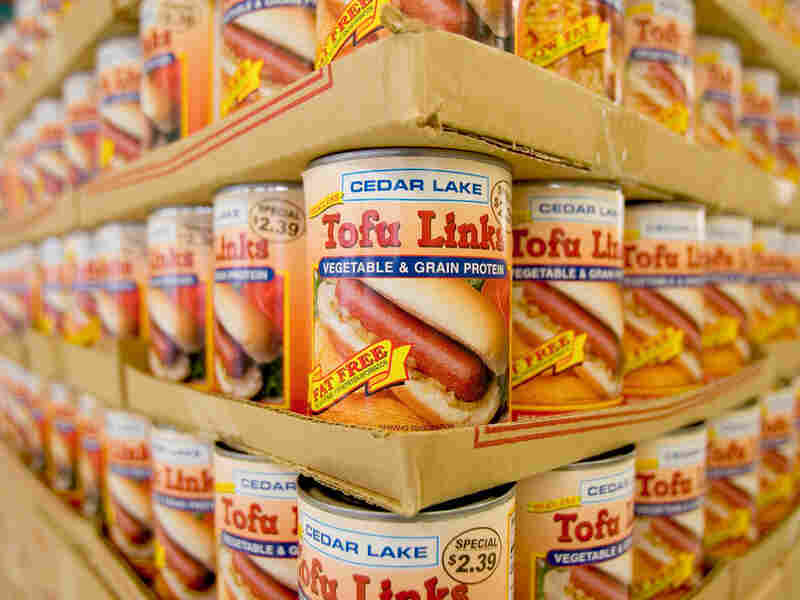 Tofu links sold in Loma Linda, Calif. The Blue Zones research shows that adherents of the Adventist diet, which is mostly plant-based, have lowest rates of heart disease and diabetes in the U.S. and very low rates of obesity. David Mclain/Courtesy of Blue Zones hide caption 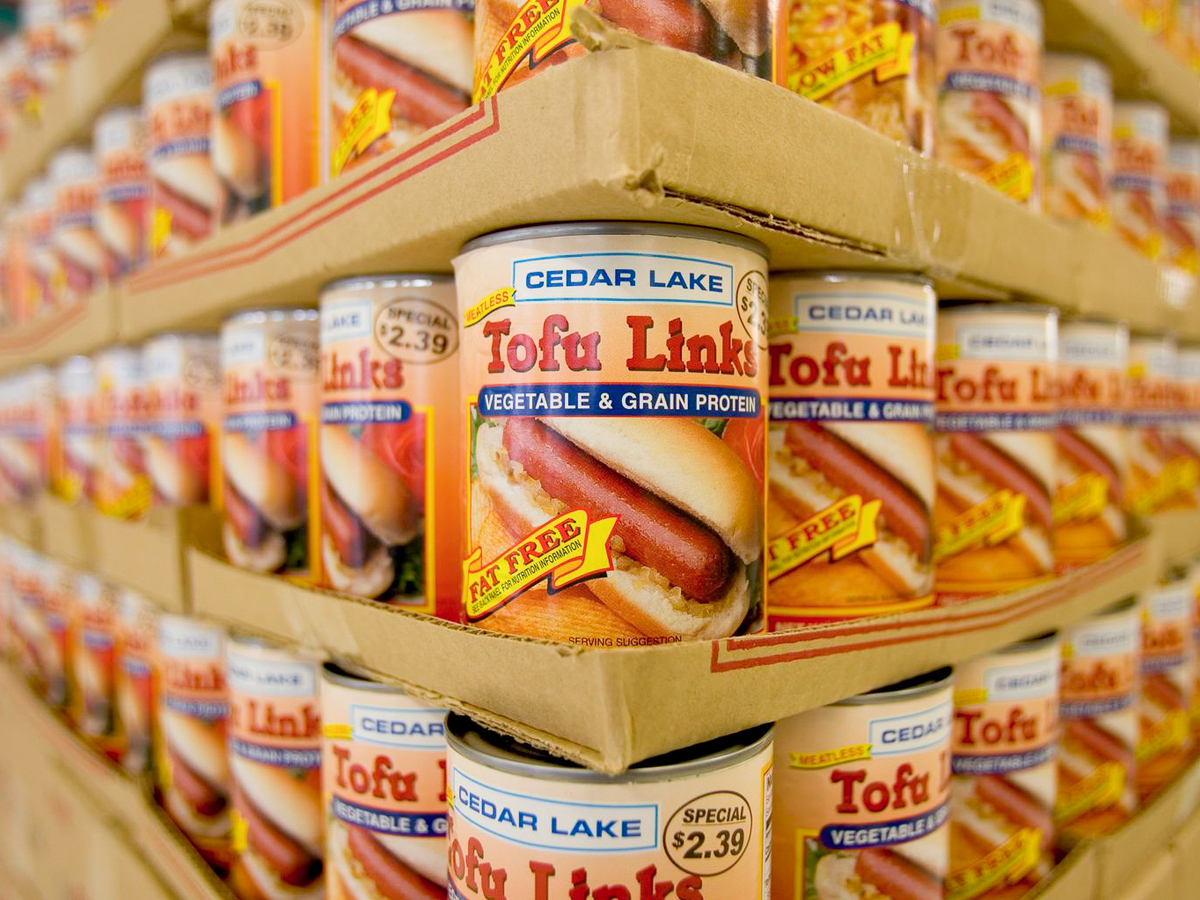 Tofu links sold in Loma Linda, Calif. The Blue Zones research shows that adherents of the Adventist diet, which is mostly plant-based, have lowest rates of heart disease and diabetes in the U.S. and very low rates of obesity.

They also follow a "biblical" diet focused on grains, fruits, nuts and vegetables, and drink only water. (Some of them eat small amounts of meat and fish.) Sugar is taboo, too. As one Loma Linda centenarian tells Buettner: "I'm very much against sugar except natural sources like fruit, dates or figs. I never eat refined sugar or drink sodas."

Gary Fraser, a cardiologist and epidemiologist at Loma Linda University and an Adventist himself, has found in studies that Adventists who follow the religion's teachings lived about 10 years longer than people who didn't. Another key insight? Pesco-vegetarians in the community, who ate a plant-based diet with up to one serving of fish a day, lived longer than vegan Adventists.

We'd love to be invited for dinner by a centenarian here, where they #putaneggonit all the time. One delicious-sounding meal Buettner was served by a 99-year-old woman (who's now 107) consisted of rice and beans, garnished with cheese and cilantro, on corn tortillas, with an egg on top.

As Buettner writes, "The big secret of the Nicoyan diet was the 'three sisters' of Meso-American agriculture: beans, corn and squash." Those three staples, plus papayas, yams, bananas and peach palms (a small Central American oval fruit high in vitamins A and C), are what fuel the region's elders over the century.

Granted, it's not easy to emulate the Blue Zoners if you live in the U.S. where you're likely to be tempted with bacon and cupcakes every day. And maybe you don't want to become a vegan.

But Buettner has plenty to say about simple ways Americans could live like these isolated tribes of exceptional health in The Blue Zone Solution. That's what he's focused on now with the Blue Zone Project: helping communities adapt the cross-cutting tenets of a healthful lifestyle. So far, the project has gotten several towns — and U.S. states — to sign on.