Accessibility links
How AeroPress Fans Are Hacking Their Way To A Better Cup Of Coffee : The Salt Coffee aficionados say the simple, syringe-like device makes exceptional espresso and allows for countless variations on the perfect cup. Not surprising, given that its inventor is a serial tinkerer. 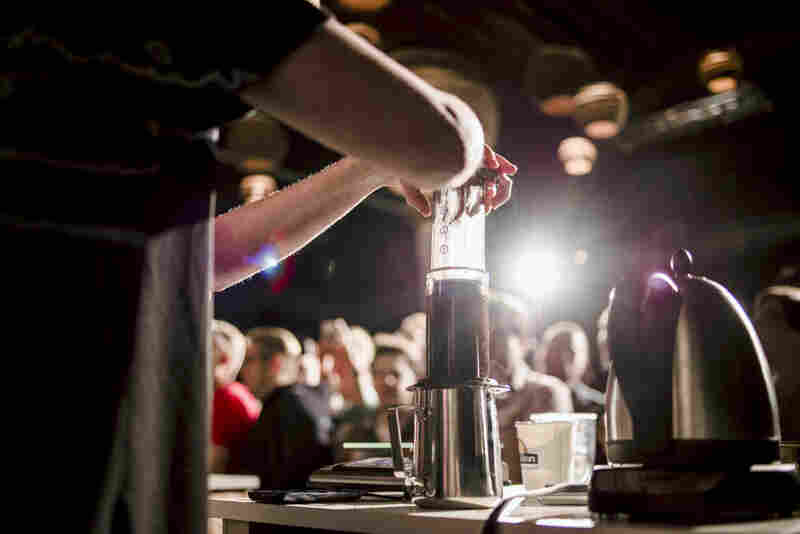 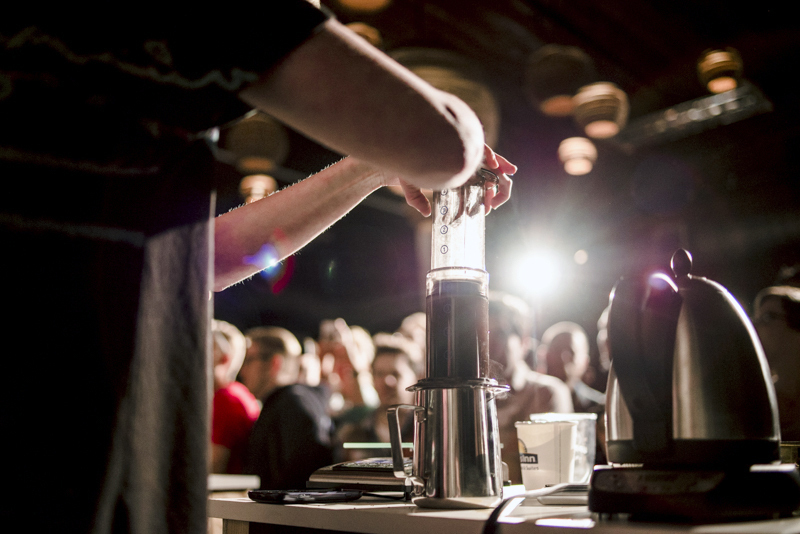 Twenty-four competitors put their brewing techniques to the test last week at the World AeroPress Competition in Seattle.

Perhaps it takes a hacker to lure a hacker.

And Alan Adler, 76, is the ultimate hacker. A serial inventor based in Silicon Valley, Adler has 40 patents to his name. But among coffee aficionados, it's an incredibly simple device that's earned him accolades: the AeroPress.

The AeroPress is essentially a giant plastic syringe with a rubber-plunger end, which compresses water and coffee grounds through a thin filter into a mug, producing a strong, single serving of espresso. The whole process takes about 30 seconds. That is, unless you are one of the many enthusiasts who manipulate the device with varied pour-over, press or steep times to produce a flexible range of recipes.

This very ease of use has inspired an ardent do-it-yourself culture. Baristas and home brewers "hack" the AeroPress to create countless variations on the coffee-making process, all in pursuit of a perfect cup.

"With a lot of coffee makers, you have to just accept what they do for you," Adler tells The Salt. "With the AeroPress, you can innovate."

And innovate they do. Devoted AeroPress hackers tested their mettle last week at the World AeroPress Championship in Seattle. Before they got there, the 35 competitors first had to best the competition in national championships staged all over the world.

All competitors worked with the same roast, a rare coffee from Costa Rica. Participants had eight minutes to create their own recipe. They could brew however they liked, with whichever grinder and at whatever temperature. Their goal: to create the tastiest cup of coffee, as judged by a panel of coffee-world celebrities.

The trick, explains Tim Varney, who organizes the world championship, is to hit upon the right combination of key factors: amount of agitation or turbulence (stirring); water temperature; grind size and coffee-to-water ratio. All of these variables can affect extraction, or the process of pulling flavor from grounds with water. Also important is "blooming," a technique adapted from pour-over coffee, which means letting the grounds get saturated with water after adding a small amount of water, then adding the rest.

Tweaking these factors will affect how your cup tastes. For example, stirring thoroughly will increase the effectiveness of the extraction, where underextraction can be acidic. A slow, steady press also reduces acidity. Choose to bloom and you'll saturate the grounds evenly to get a sweeter-tasting result. Using water at higher temperatures produces a more bitter taste. Finer grinds are saturated faster, but may leak through the filter more quickly and tend toward a bitter cup. Adding more water and less pressure will get you closer to brewed coffee. Or you can make a stronger cup with less water and more steep time as a base for a latte or Americano.

The popular inverted method, in which the device is turned upside down after water is added to the grounds, is used to keep coffee from escaping and increase the steep time to get you a sweeter cup.

If you want even more techniques to play with, another unconventional approach is taking advantage of the pressurized chamber to infuse the brew with flavors like raspberry or chocolate. 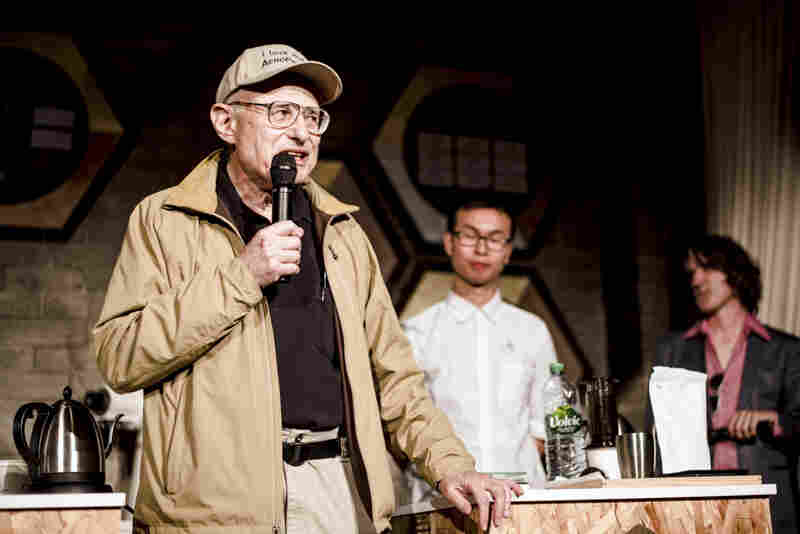 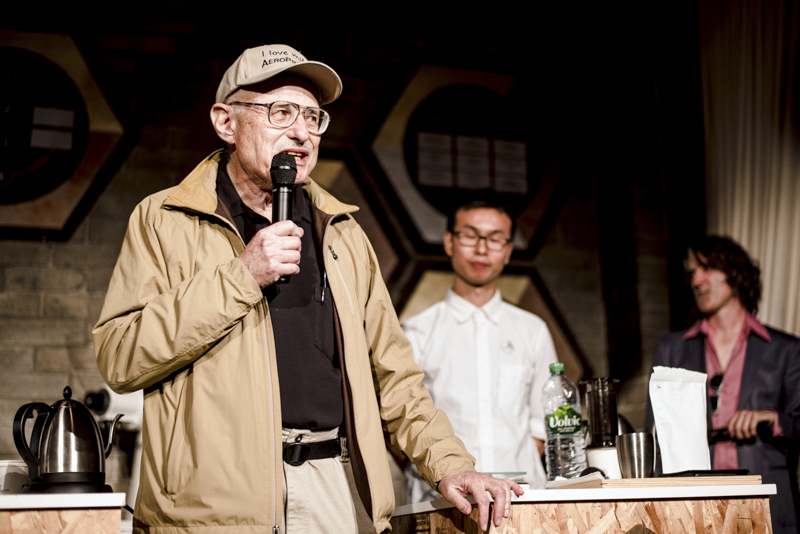 This year's special guest at the world championship, AeroPress inventor Alan Adler, received a warm welcome as he took the stage in Seattle.

While there's plenty of room for creativity, you can go too far, says Varney. One year, he recalls, a Danish competitor used a fish filter to make his brew — "which tasted terrible, obviously."

The first world championship was held in 2008 in Oslo, where Varney was living at the time. He and his friends — including Tim Wendelboe, one of this year's judges — were curious about how to use the then still-newish AeroPress. So they started playing with it by staging an informal competition. Word of their experiments spread among the coffee cognoscenti, and more people followed their lead.

The AeroPress itself was born out of a similar desire to fiddle. Back in 2004, Adler found himself looking for a quick, easy, adjustable device to make single-serving coffee at home. But none of the machines on the market would let him modify the taste, so he started tinkering. For Adler, who has designed complicated stuff including controls for nuclear reactors, simplicity was key.

"I worked on projects that were so complicated and took so long that by the time they were created, they were somewhat obsolete," says Adler, who also lectures in engineering at Stanford University. "So I developed an appreciation for simplicity."

At first, even Adler wasn't sure exactly how best to use his invention, he tells The Salt. So like thousands of other AeroPress fans, he learned through trial and error. For him, water temperature is essential: He says the tastier recipes have stuck closer to his recommended water temperature of 80 degrees Celsius (176 Fahrenheit).

But others have had luck with colder water. Jeff Verellen, a two-time world champion from Belgium, has been very successful with his strategy of using very low temperature water.

This year's world champion, Lukas Zahradnik from Slovakia, used water close to Adler's ideal (79 C; 174 F) but with the inverted method. (Here's his winning recipe, if you want to try it out.)

As devoted as its fans are, the AeroPress is likely to remain a somewhat niche product. Stephen Morrissey, one of the judges of this year's world championship, says because of its 8-ounce brew capacity, it's best suited for home brewers and specialty coffee shops.

"The brew-size limitations possibly make it the darling of home users or coffee professionals on the road, and prevent it from being more broadly used in commercial settings," says Morrissey. 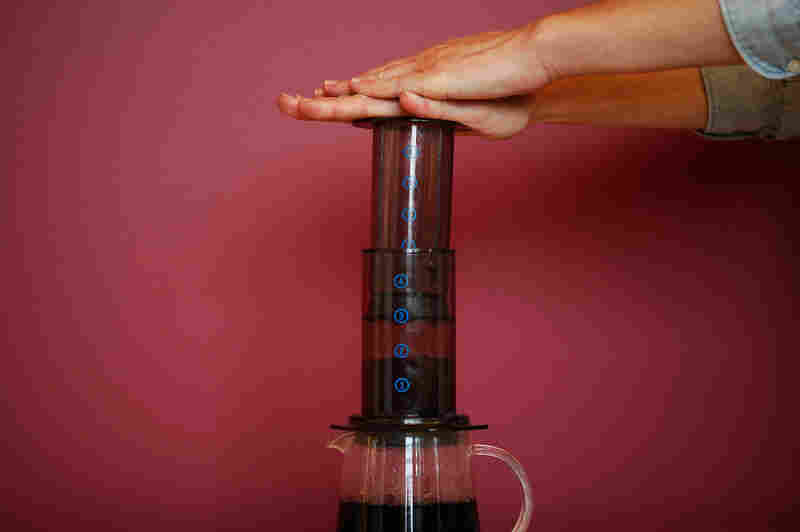 Emma Bowman makes herself a cup of espresso with the AeroPress. Ryan Kellman/NPR hide caption 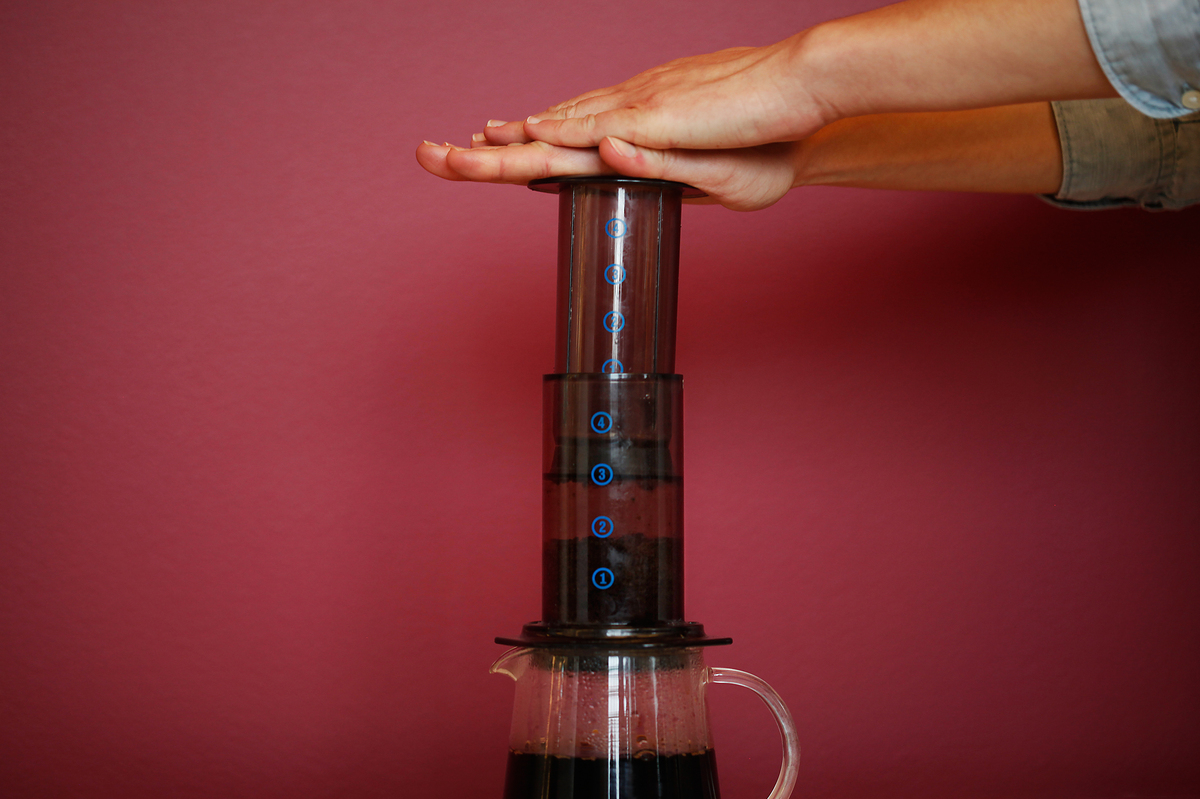 Emma Bowman makes herself a cup of espresso with the AeroPress.

As for Adler, who attended the World AeroPress Championship for the first time this year, he's just happy people are so passionate about his little invention.

"I'm the luckiest guy in the world," he told the crowd in Seattle last week. "I never expected this."

Lately, Adler says he is back in the shop, still tinkering, with several more coffee-device designs in the works.

An earlier version of this story incorrectly stated that there were 24 competitors in the 2015 World AeroPress Championship, which was held in the U.S. for the first time. There were, in fact, 35 competitors, and this is the second time the WAC has been held in the U.S.