Accessibility links
When Danish Cows See Fresh Spring Pasture, They Jump For Joy : The Salt Thousands of spectators gather every April to see ecstatic cows return to fields on organic farms around Denmark. The organic industry says the event has helped fuel demand for organic foods.

"They're running a little late," chides an elderly gentleman, tapping his watch at 12:02 p.m. He's come to this farm near the Danish city of Ikast, along with about 1,500 others, to celebrate what has become something of a national holiday in Denmark. It's the Sunday in mid-April when thousands of organic dairy cows at 75 farms across the country are released into the green fields of spring. At exactly noon. Eh hem.

Ah, but here they come!

Cows, despite their tendency to lumber, become almost sprightly when treated to a change of scenery. They leap, they kick, they tussle, they bellow with joy. Danes, who're also emerging from the long, dark winter, are nothing if not empathetic.

The Secret Lives Of Cows: Jumping For Joy

With children cheering from their parents' shoulders, the first wave of cows come galloping into the sun. They shoot down a driveway lined with onlookers and go bouncing — literally — into the nearest field. As a Canadian cow expert told The Salt's Maria Godoy in 2014, cows tend to get an extra spring or leap in their step "whenever something new or unexpected happens."

In the pasture, the frolicking and playful head-butting continues for a good 20 minutes before the whole bovine party settles into munching. And the Danes wander off to the food tent to do the same.

The idea of turning this age-old "dancing cow" phenomenon into a spectator sport arose about a decade ago when the folks at Organic Denmark were searching for a way to make the concept of organic more visual. 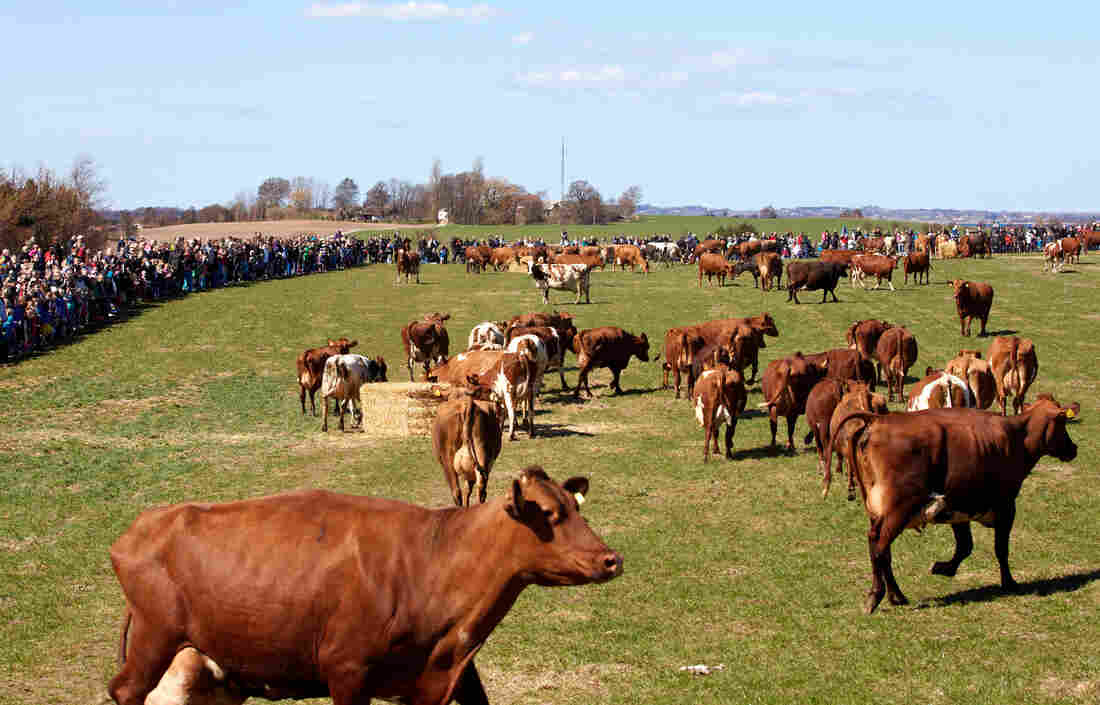 Near the Danish city of Ikast, some 1,500 spectators gathered on April 19 to celebrate what has become something of a national holiday at organic dairy farms around Denmark. Courtesy of Organic Denmark hide caption 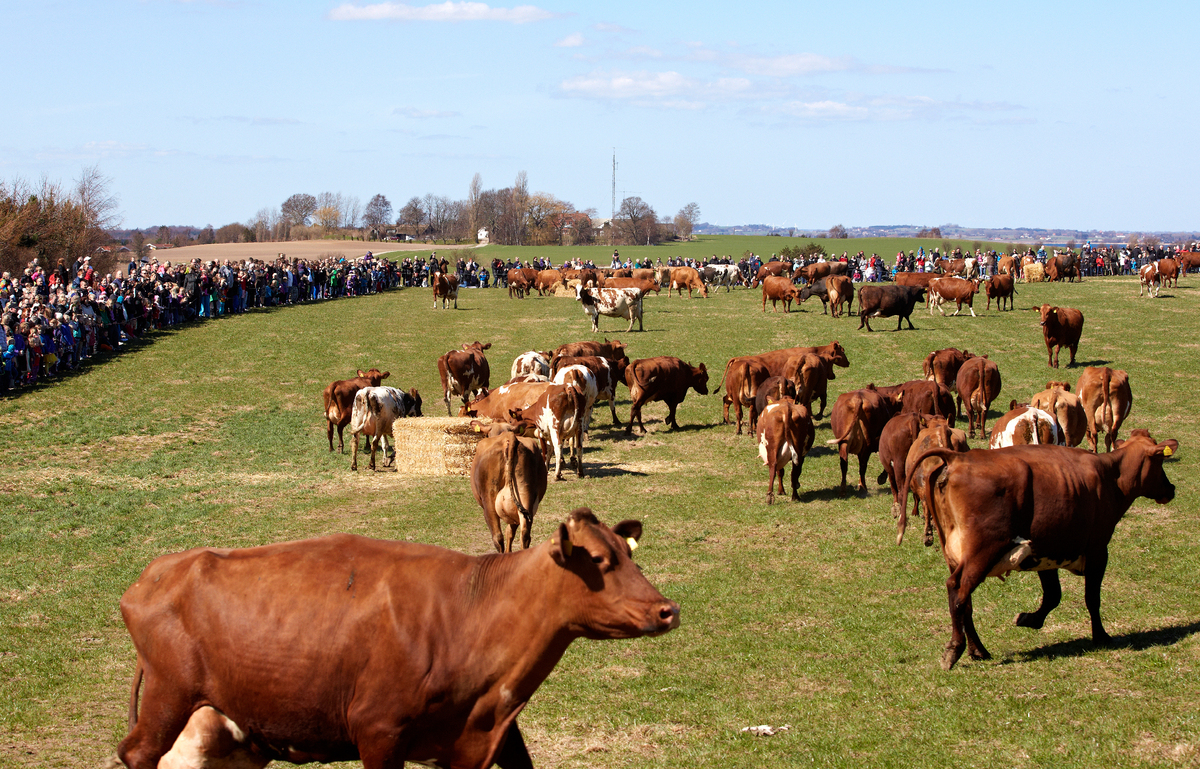 Near the Danish city of Ikast, some 1,500 spectators gathered on April 19 to celebrate what has become something of a national holiday at organic dairy farms around Denmark.

"The rules say that organic cows have to be let out to pasture from April to November," says Birgitte Nygaard, who organizes the event in Ikast. That's not true of conventional dairy cows, the vast majority of whom never go outside. "The first time you see the excitement of the [organically raised] cows, how they truly dance around out in the fields, there can be no doubt for anyone that this is where they belong."

In 2005, Økodag, or "Organic Day," attracted about 10,000 visitors. This year, a record 247,000 people lined the fields, according to Organic Denmark. (Dairy cows in the U.K. and the Netherlands have been caught dancing on camera as well, but those countries don't celebrate it to the extent that Denmark does.)

And, though it's hard to prove, Nygaard is convinced there's a direct correlation between the event's popularity and the success of Denmark's organic industry in general.

According to a recent report by Denmark's Ministry of Food, Agriculture and Fisheries, 8 percent of the food sold here is now organic. That's the highest percentage in the world.

And when you look just at milk, says Mads Helms, vice chairman of Organic Denmark, the figure is closer to 30 percent.

Take Trine Skovlund, who's visiting from the nearest city. With a baby strapped to her chest, she looks out over a swarm of children climbing a jungle gym made of hay bales. She's been coming to Økodag for a few years, and this time she brought along a friend. While Skovlund says she doesn't always buy organic, she tries especially hard when it comes to milk.

"I think I've actually been affected a little bit by this day," she says. "When you see the cows and how good they have it, you have that in your thoughts when you're shopping."

Along with his industry position, Helms of Organic Denmark is the third-generation owner of this farm, and he speaks with the matter-of-fact tone of someone who's lived through a few decades of agricultural booms and busts. 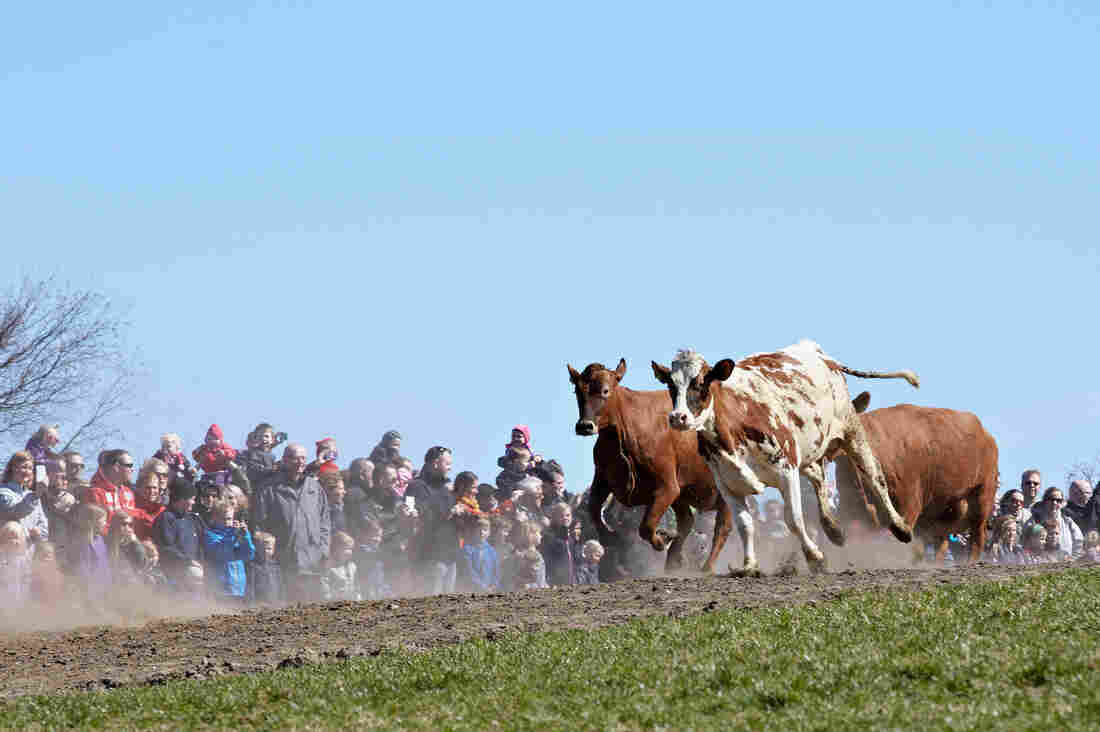 A Danish organic food group says there's a direct correlation between the event's popularity and the organic industry's success in the country. Courtesy of Organic Denmark hide caption

People come to Økodag to show their kids where milk comes from, Helms says, but that doesn't necessarily mean they're going to buy organic. He thinks that's because most of them can't visualize how it compares to a conventional farm. Most of his neighbors (and many of the people here today), he says, buy conventional milk because organic milk can cost as much as 80 percent more, and they shop based on price alone.

And yet, Helms does not seem worried.

That's because demand for organics continues to grow in urban areas, especially now that the financial crisis is over. And Helms gives Danish grocery stores credit for cooperating with farmers to make organics by paying them a premium for the product.

There's also a recent government initiative aimed at doubling the amount of land devoted to organic production by 2020, largely by encouraging public institutions to serve organic food. All of these developments have created a very different set of challenges from Helms' early days as an organics pioneer.

"The focus right now is to get production up," he says. "Now the market is growing faster than the production. So we have a challenge to get new farmers." And more cows to join the party.