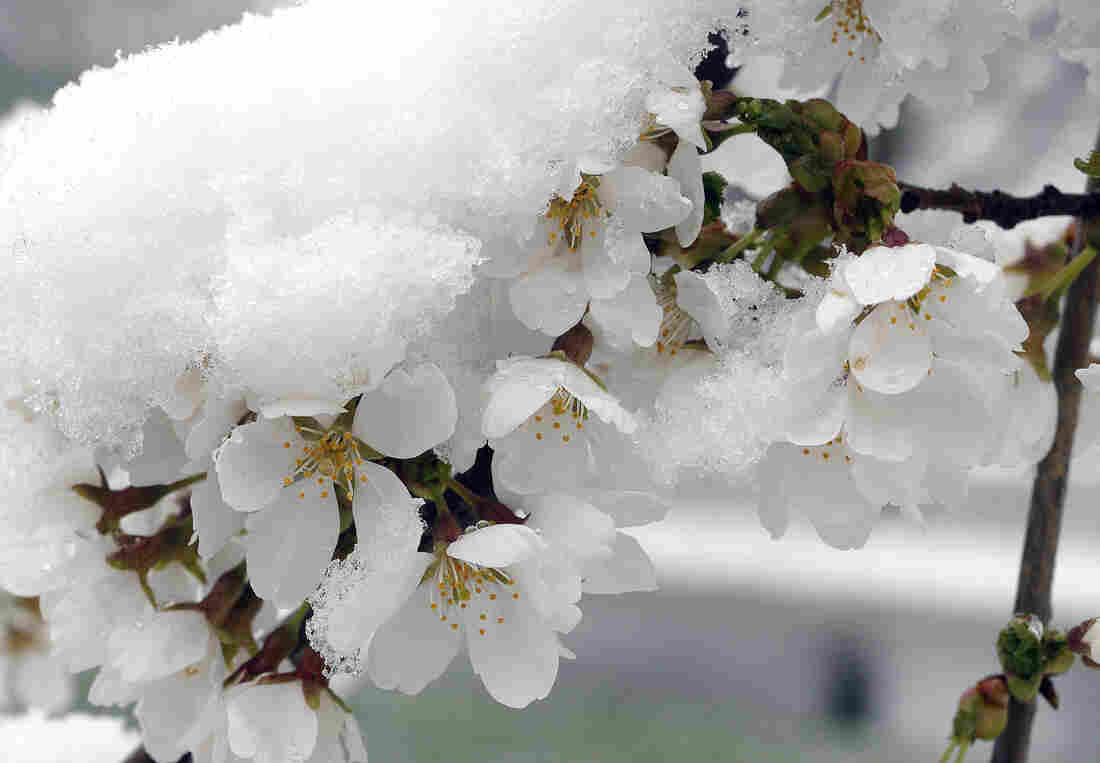 A cherry tree and its blossoms are covered with snow in an orchard near Traverse City, Mich. Three years ago, almost every fruit crop in Michigan was frozen out when cold temperatures followed some 80 degree days in March. John L. Russell/AP hide caption 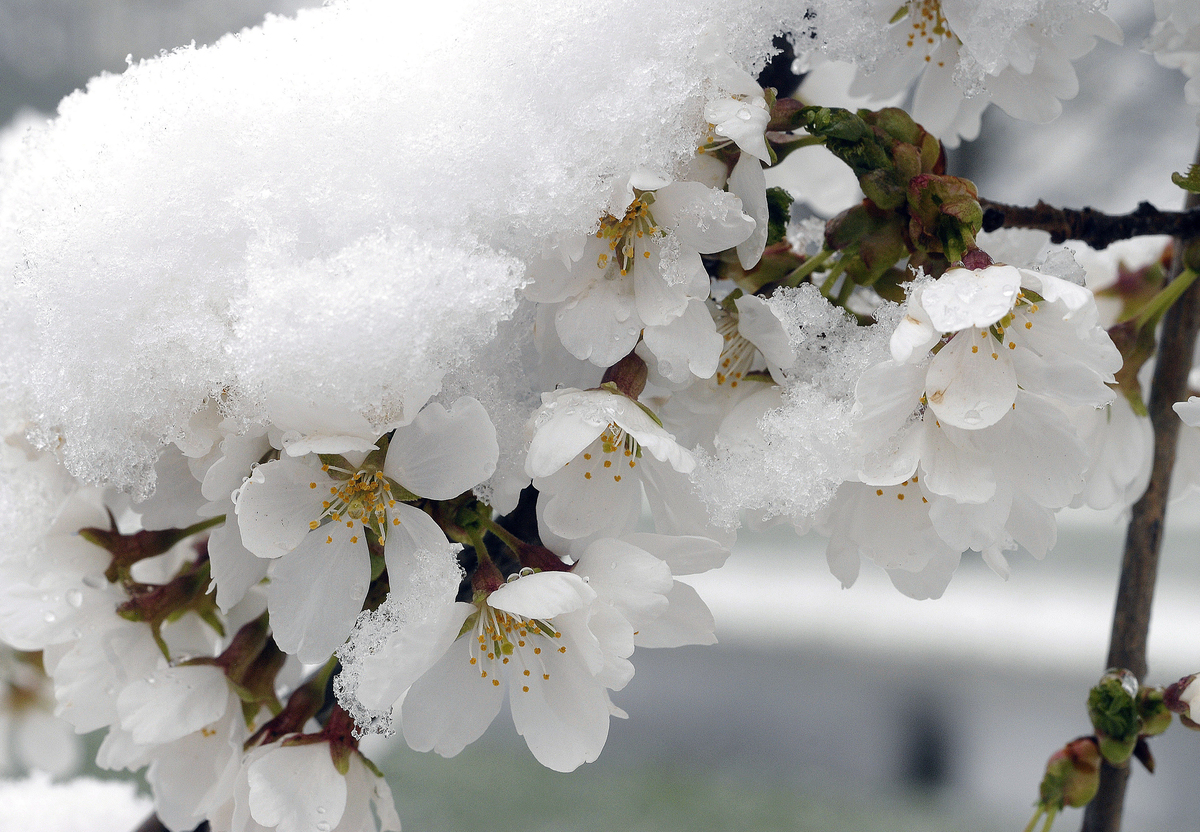 A cherry tree and its blossoms are covered with snow in an orchard near Traverse City, Mich. Three years ago, almost every fruit crop in Michigan was frozen out when cold temperatures followed some 80 degree days in March.

More than half of Ken Engle's 140-acre farm is planted with what he calls sour cherries.

These trees are the most vulnerable just before their white blossoms unfold at the so-called water bud stage. And in orchard country, extreme heat and cold can mean mass crop damage. "And what causes the damage is, on a cold night the moisture that's in the blossom will actually freeze," Engle says. "It will break the cell wall and the blossom is killed."

Past losses now have researchers looking at new ways to use old technologies to save those crops.

In 2002, a cold snap hit when trees were in that stage and destroyed almost the entire tart cherry crop here. Cherries — and most other fruits — were wiped out again in 2012. That year, 80-degree days in March that caused blossoms to come out more than a month early were followed by cold temperatures.

"Everything was frozen here," Engle says, adding, "We had trees literally with less fruit on them than what we normally leave after we've shaken them."

And while 2010 was a very hot year, it also set records for early fruit blossoms. Indeed, on average, fruit trees here now bloom about a week earlier than they did 40 years ago.

There isn't much a grower can do to protect a budding tree from cold and frost.

Engle does have a wind machine mounted in one orchard. It looks like a small windmill and can mix in warmer air from above the tree tops with the colder air that settles among the trees. But at best, it might raise the temperature a degree or two.

However, this spring, Engle is experimenting with an old technology: sprinklers to keep his trees wet. That cools down the tree to trick it into thinking winter is not quite over – even if the weather turns unseasonably warm too early, as it did in 2012.

"Five minutes on, five minutes off. Wet them, let them dry out. And as a consequence, they used about 36 inches of water," he says.

That's about 1 million gallons per acre. That much water is expensive and causes other problems, like disease. So nobody thought much more about cooling down trees until the freezing disaster of 2012.

That got Flore running experiments that he thinks show a possible new path forward.

He says technology makes this idea viable. Instead of garden sprinklers, he's using misters, like you see spraying produce at the grocery store.

And his team has developed software that calculates exactly when water is needed.

"Now based on that, we can turn this system on and off, which saves a lot of water," he says.

Flore says he's used less than a third of the water consumed in the Utah experiment and pushed back bloom time 10 days in some cases.

The question is whether growers can afford to install a bunch of hoses and sprayers in their orchards to fight off erratic spring weather.

Matt Grieshop, also at Michigan State, says if it can prevent some frost damage, that could be a game changer.

"If you can save one crop of apples, the system has paid for itself," he says.

And Greishop says the cooling could be useful in warm climates, too, where frost isn't a problem, but excess heat is.

For instance, out West, in the height of summer, the sprayers could cool trees when fruit is susceptible to sunburn.

In Michigan the stakes are higher, where it might save growers from a total loss.