Accessibility links
Lunch With Monet, Dinner With Jackson Pollock : The Salt Two new books focus on the culinary lives of these two artists. Turns out, their approaches to food provide a new way of thinking about their two very different approaches to art. 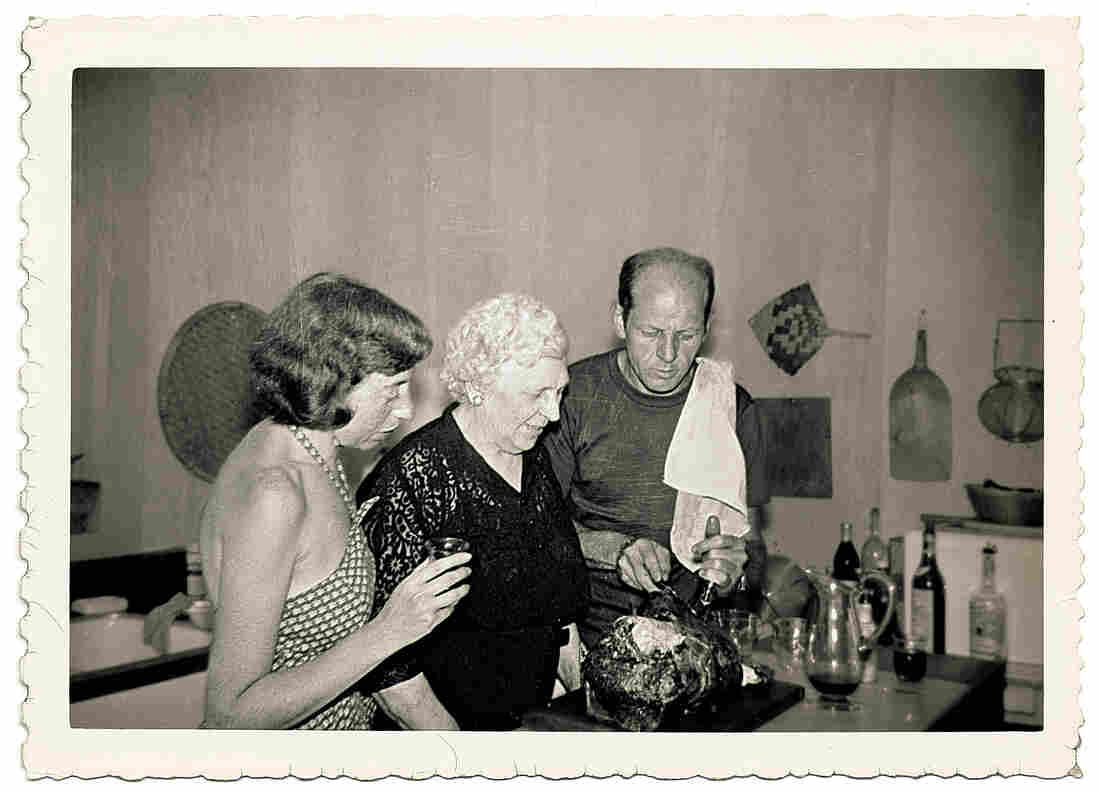 Jackson Pollock cooks with his wife, the artist Lee Krasner, and his mother, Stella Pollock, in the kitchen of his home in Springs, in East Hampton, N.Y., 1950. Courtesy Pollock‑Krasner House and Study Center hide caption 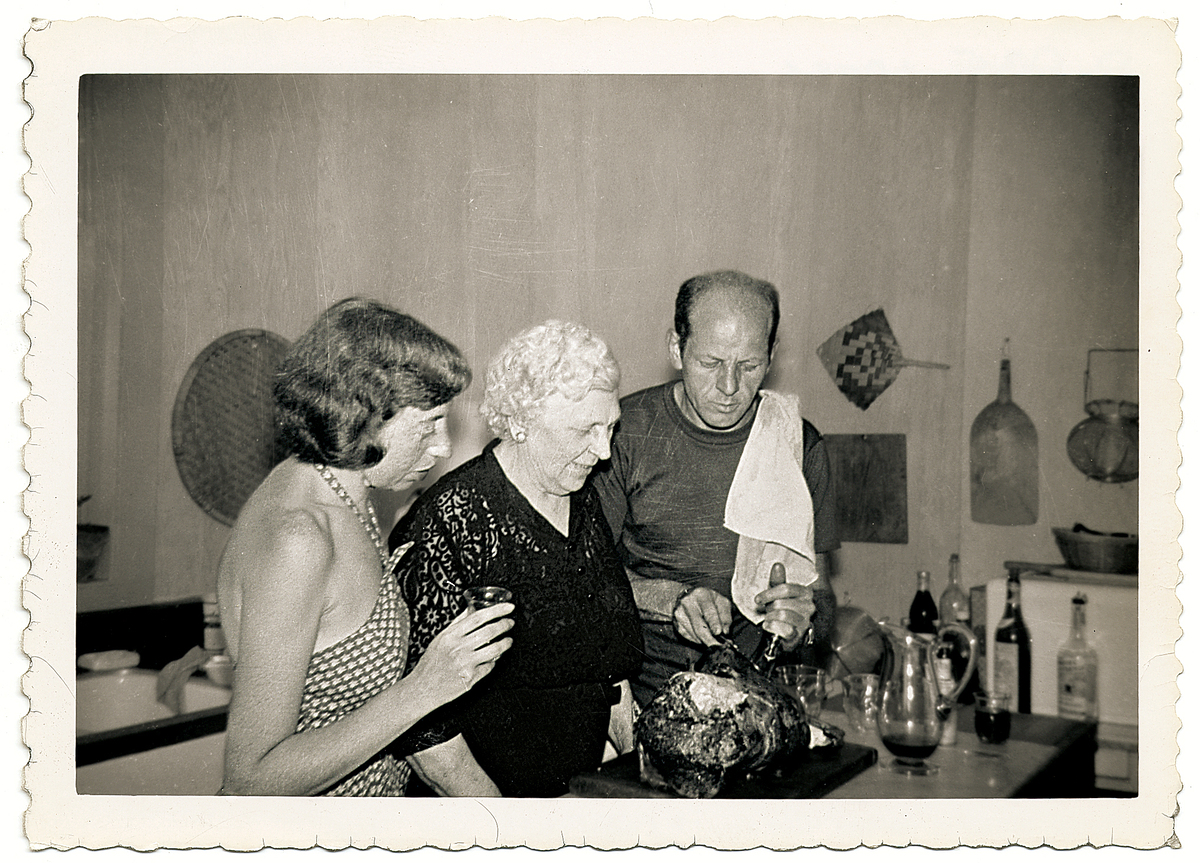 Jackson Pollock cooks with his wife, the artist Lee Krasner, and his mother, Stella Pollock, in the kitchen of his home in Springs, in East Hampton, N.Y., 1950.

Regardless of our cooking prowess, all of us have undoubtedly spent some time in the kitchen. We all need to eat, and our preferences are intensely personal. Yet food is often overlooked in the biographies of anyone who wasn't a chef or gastronomic icon. 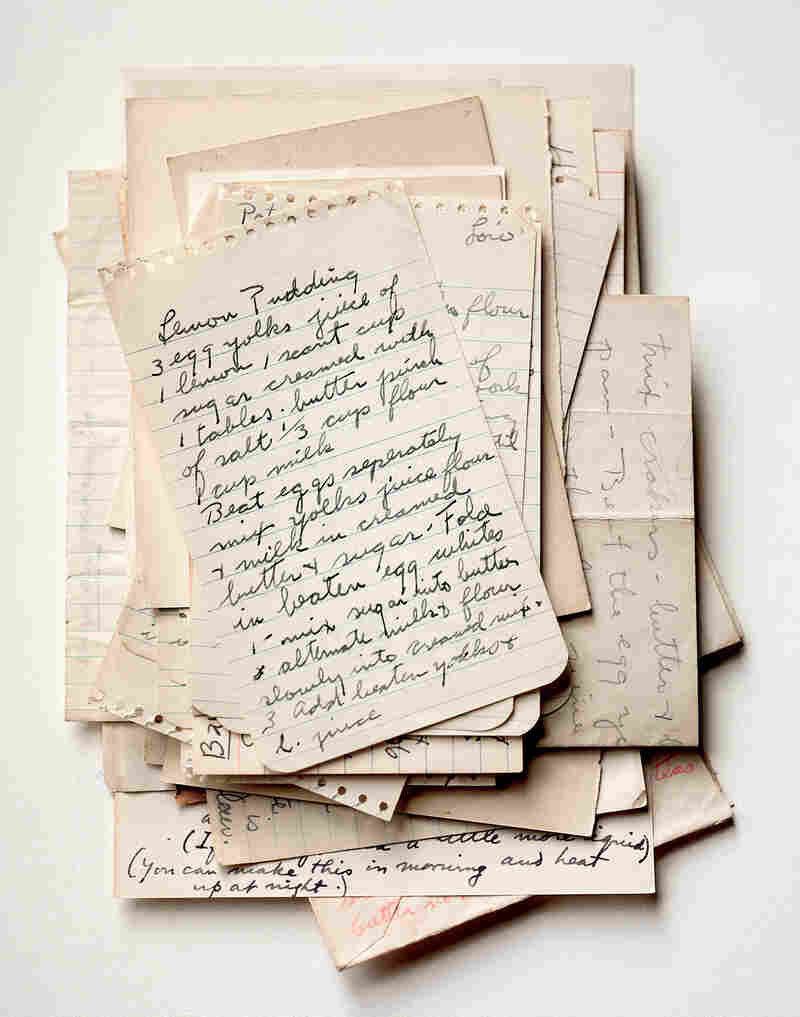 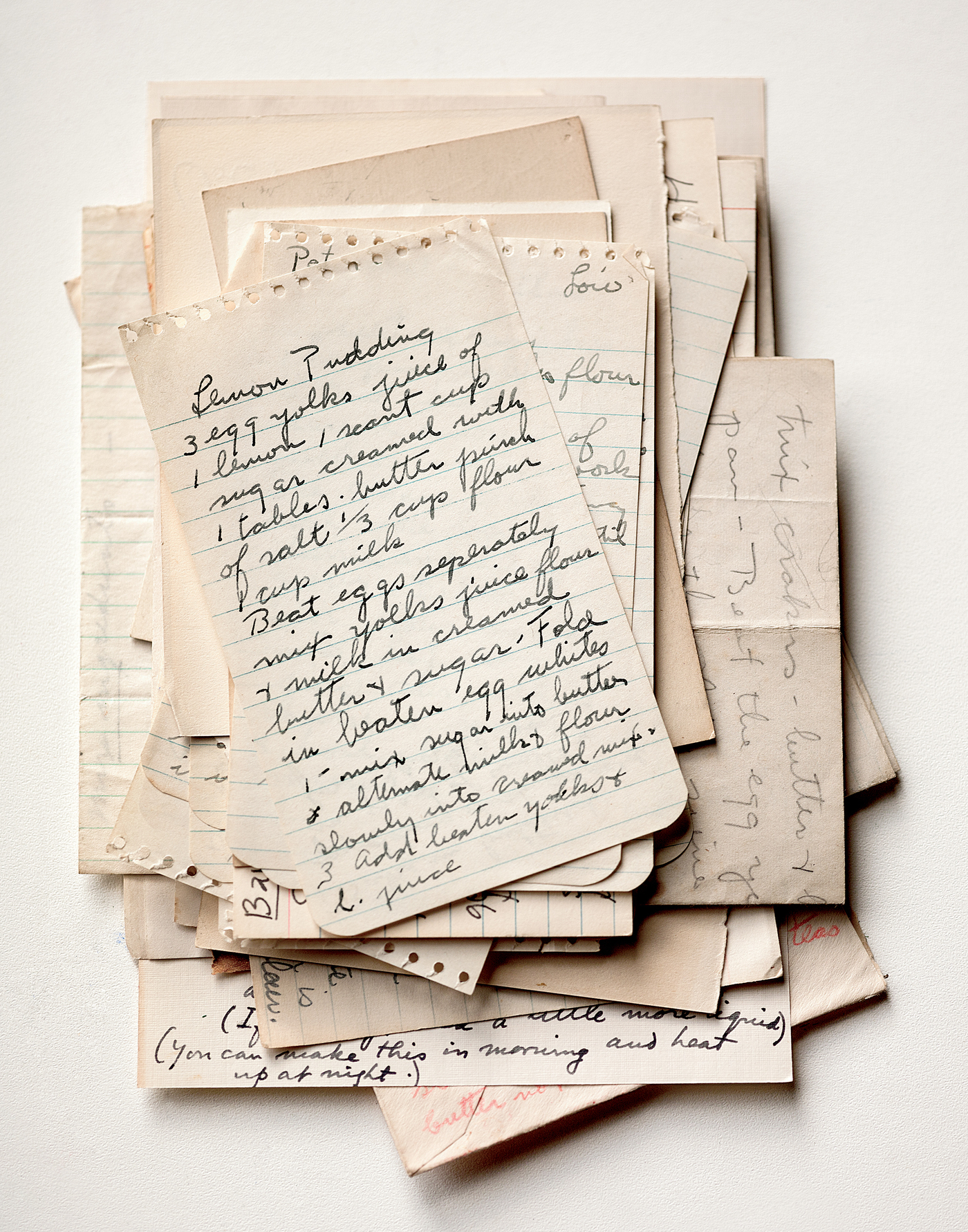 A selection of handwritten recipes discovered in Lee Krasner and Jackson Pollock's pantry.

Two new books focusing on the culinary lives of artists — Monet's Palate Cookbook, by Aileen Bordman and Derek Fell, and Dinner with Jackson Pollock, by Robyn Lea -- show this to be an oversight. The artists' approaches to food provide a new way of thinking about their very different approaches to art, and of understanding the artists themselves.

As Francesca Pollock, the artist's niece, writes in Dinner's introduction, "He painted the same way he cooked: Endlessly using leftovers; keeping and re-using; trying one color or shape and then another. There was never ever any waste. Painting, like cooking, was a way of living."

A giant of abstract expressionism, Pollock has an outward reputation "as a narcissistic action-painter fueled to alcoholic self-destruction," author Lea writes.

But the handwritten recipes found at his house reveal a quieter, domestic side. His apple pie even won first place in a local pie baking competition.

The impressionist Claude Monet is best known for his vivid landscapes of the French countryside in Normandy, north of Paris. The region, a companion film also called Monet's Palate tells us, "inspired Monet's passion for art and his passion for fine cuisine. Both of Monet's palates [/palettes] met at his home in Giverny" — whose flower gardens are featured in so many of his paintings. 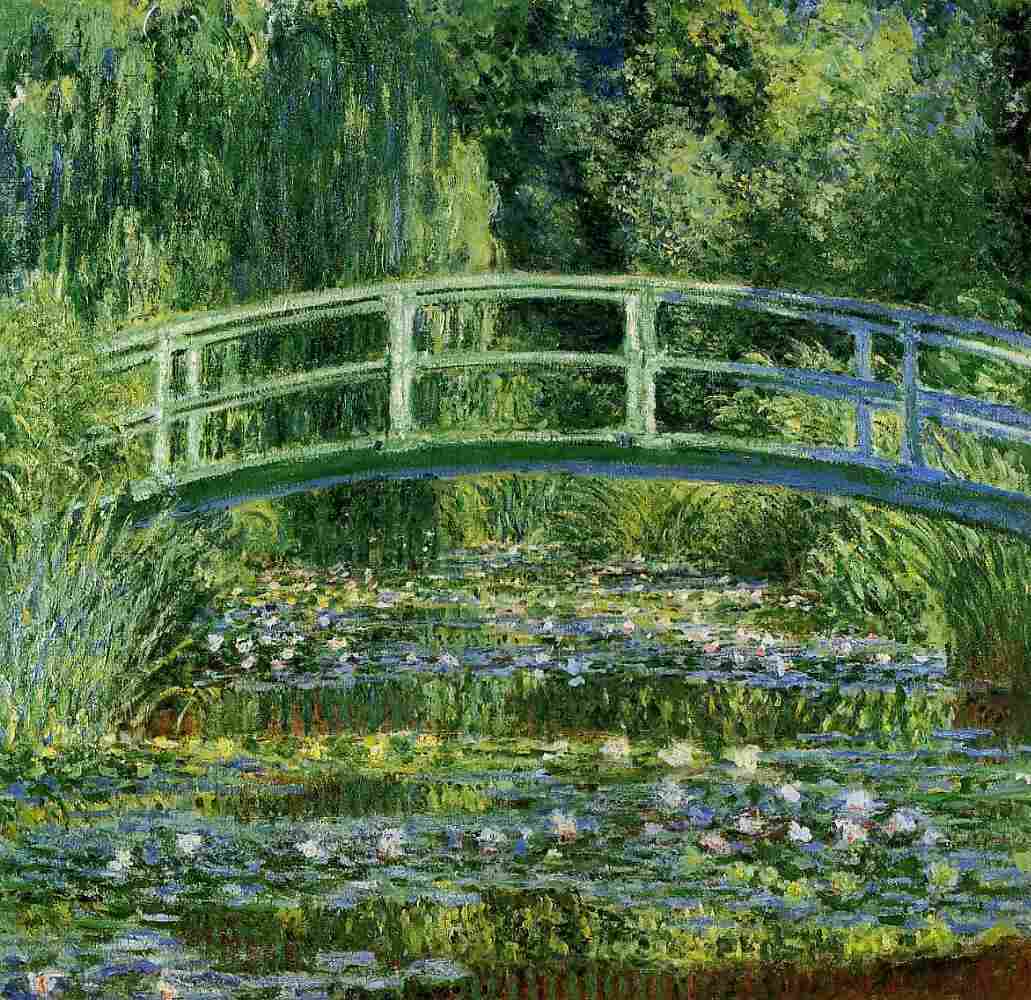 Monet's Waterlilies and Japanese bridge, 1899. Monet turned a parcel of land next to his land in Giverny into a Japanese-style water garden. Claude Monet/Wikimedia hide caption 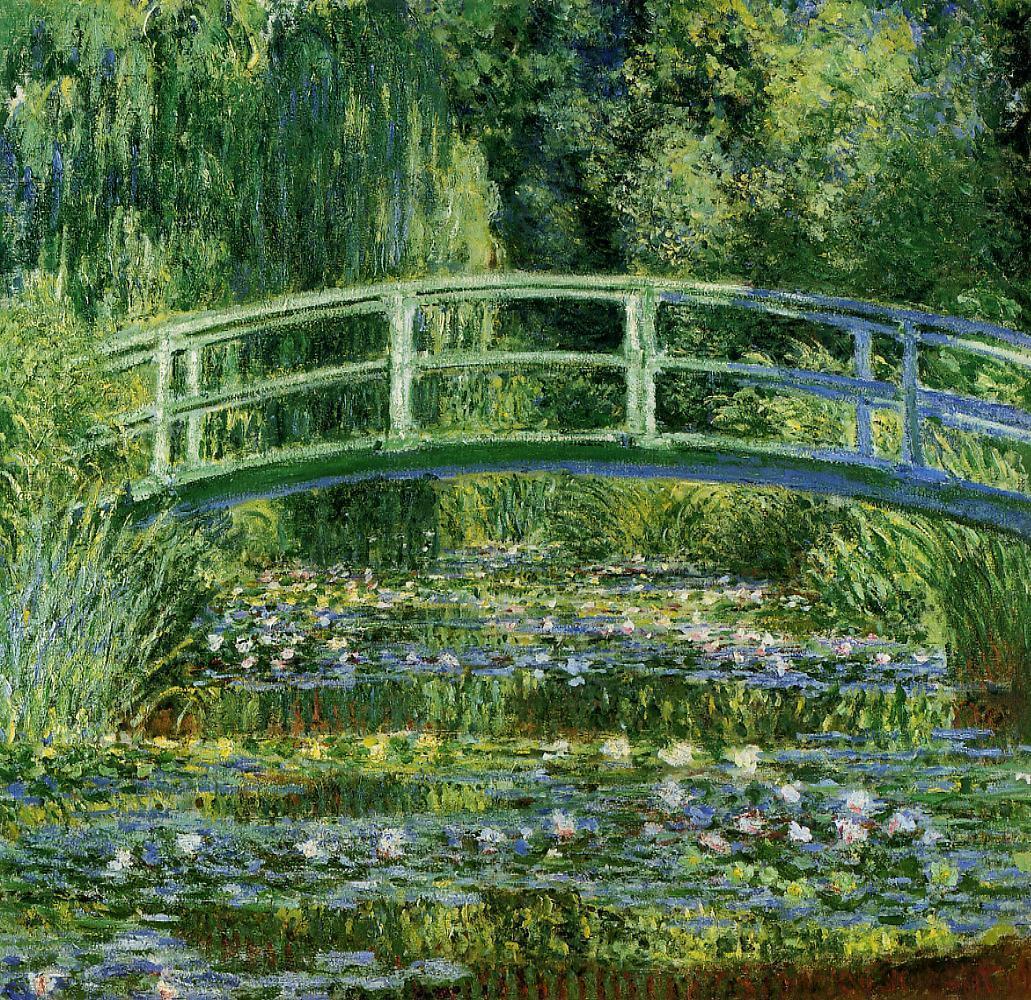 Monet's Waterlilies and Japanese bridge, 1899. Monet turned a parcel of land next to his land in Giverny into a Japanese-style water garden.

Food only occasionally appears in Monet's work, mostly in still-lifes. But though he never painted his private kitchen garden, at 2.5 acres, it was sizable in its own right, and surely at least as much a fixture in his life as its more famous blooming cousin. And Monet himself put a premium on food, according to the authors. 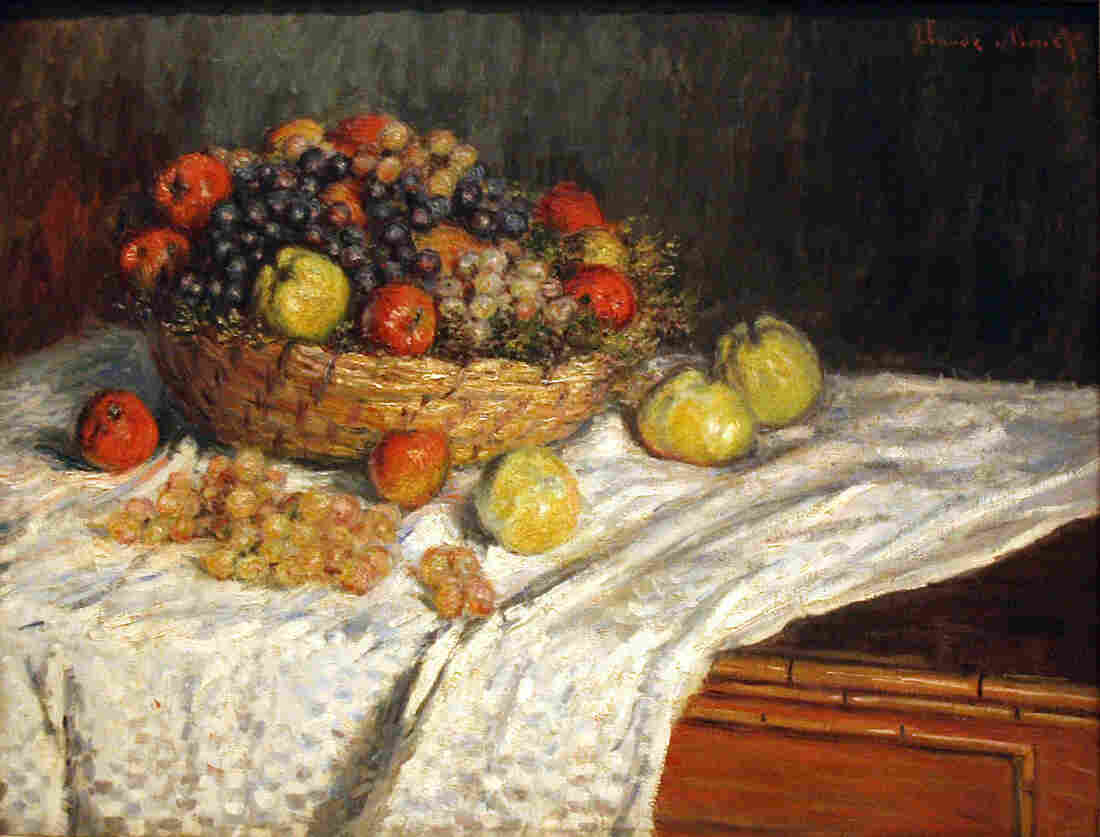 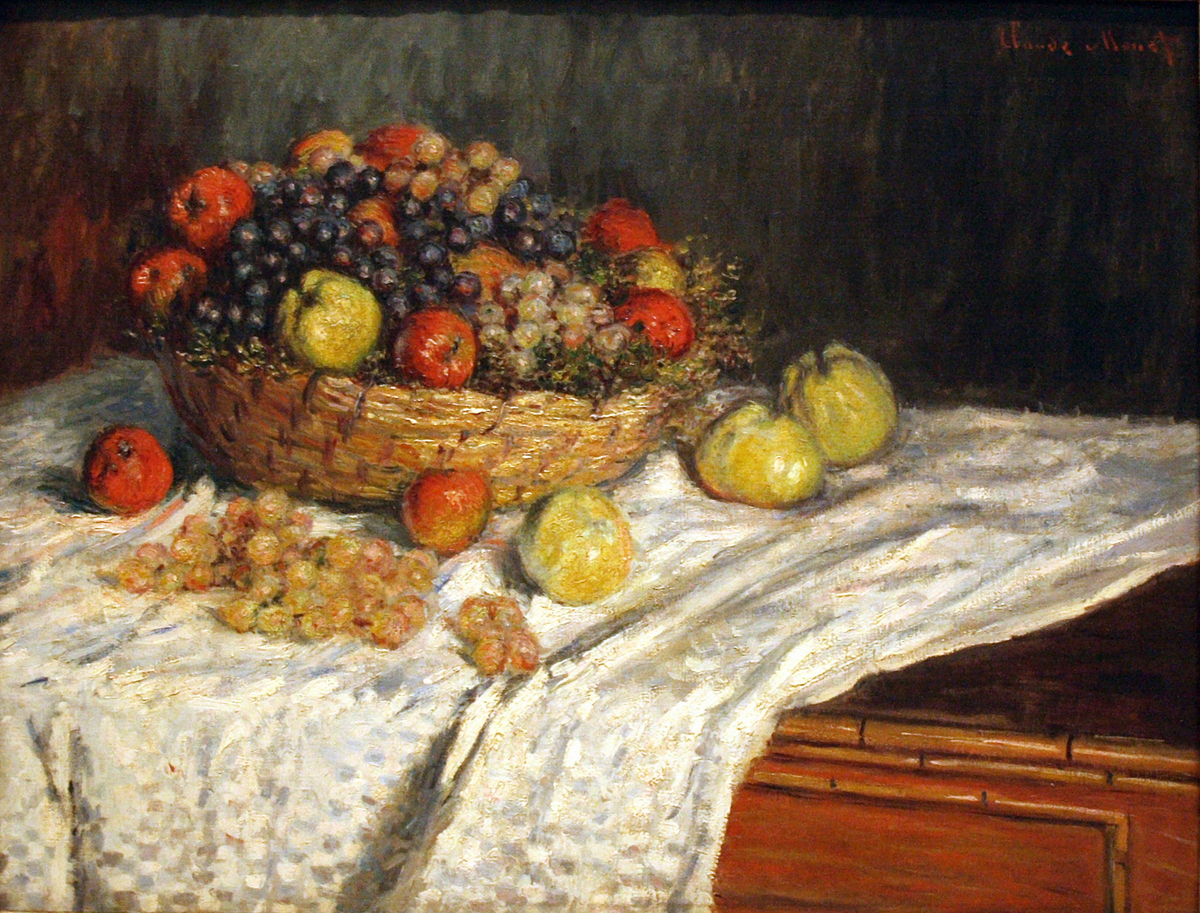 "Almost every franc that he earned, after taking care of his family's welfare, he would spend on the freshest ingredients for meals and improving the interior
and exterior of his house" — originally, a farmhouse and cider press, Bordman and Fell write. Monet, we learn, employed a cook, and his diet included eggs from his own chickens. He was actively involved in directing which vegetables were planted (he liked experimenting with new varieties), and which ones ended up on the dinner table.

Neither of the books are pure biography, though they do delve into the artists' private domestic lives. Filled with recipes — Pollock's are drawn from his own collection, while those in the Monet book are inspired by his gardens and by French cuisine — the books give readers a peek into two famous kitchens.

Imagine Monet's chef wandering out into the vast gardens to pick peaches and apples for a fruit gratin. 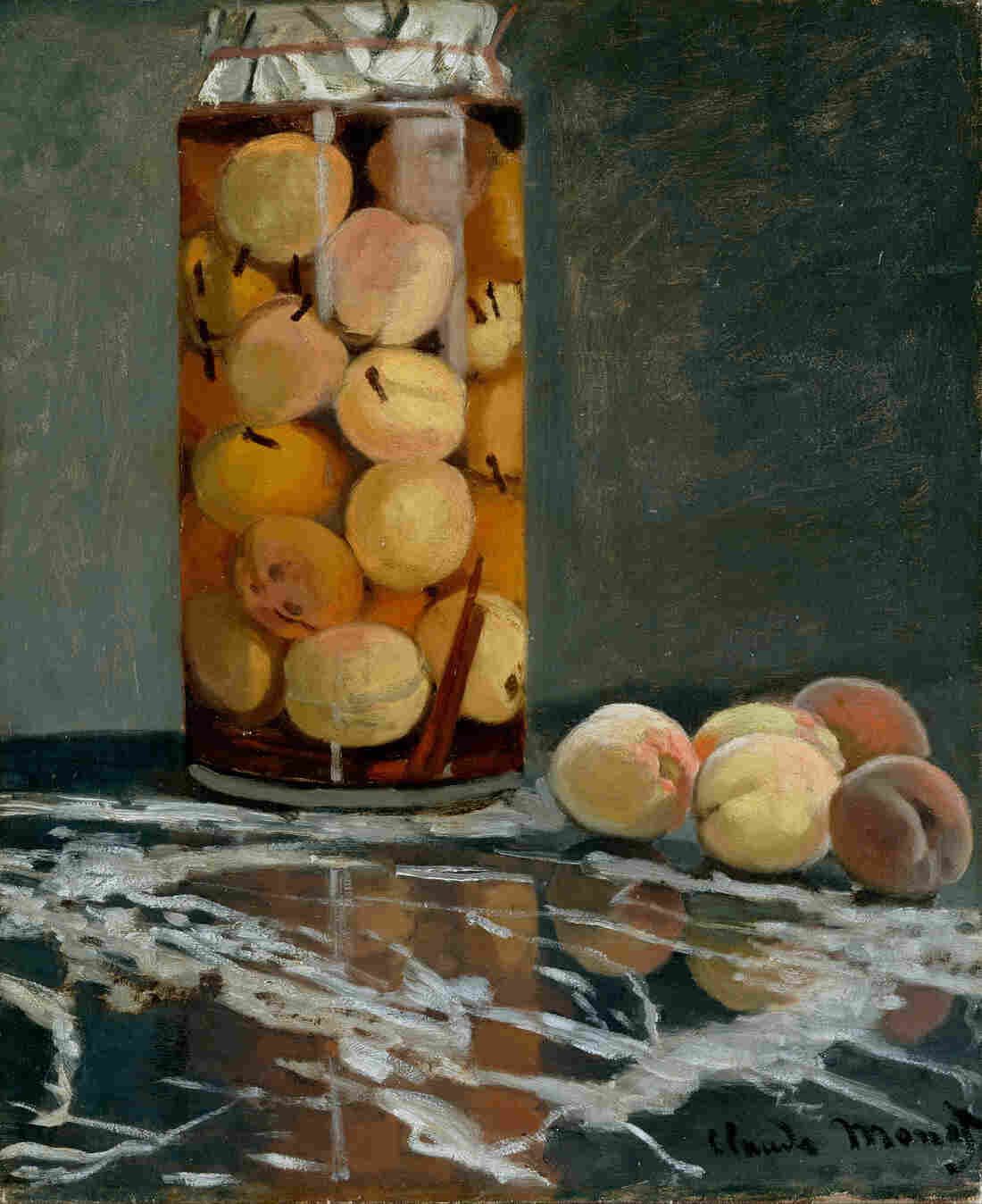 Monet's Jar of Peaches, circa 1866. The artist grew peaches along the wall of his kitchen garden. Claude Monet/Wikimedia hide caption

Or 22-year-old Pollock on a cross-country roadtrip with his brother during the Depression, eating cornmeal Johnny cakes and whatever cheap food they could scrounge up.

A normal biography may portray the artists as "Artists" (with a capital "a"), but looking at any historical figure through the lens of food makes them more recognizable, accessible and — ultimately — human. 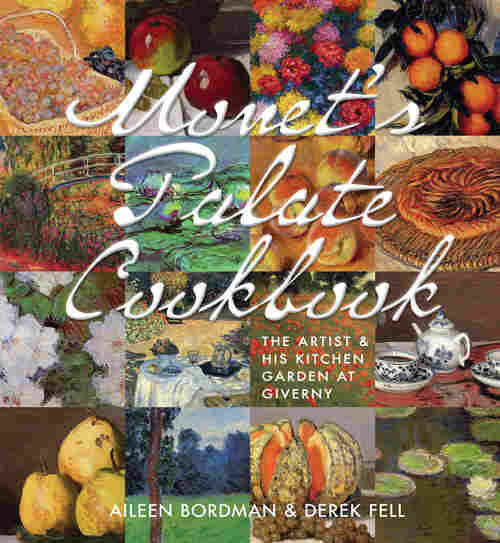 The Artist & His Kitchen Garden at Giverny

Monet grew his own peaches, espaliered against a walled enclosure that surrounded his vegetable garden. But it wasn't enough for Monet to grow the fruit; a white-flesh peach called pêche de la vigne also appeared in one of his paintings. A similar peach called Spring Snow is available in the United States. Here the beautiful fruit is combined with apples and raisins and topped with a walnut streusel kissed with rosemary in a gratin that is sure to please. Serve with vanilla ice cream, whipped cream or crème fraîche.

For streusel: Place flour, both sugars, cinnamon, rosemary and salt
in a medium-size bowl. Using a fork, stir to combine. Stir in walnuts.
Add melted butter and vanilla and stir to combine. Set aside until
ready to use. 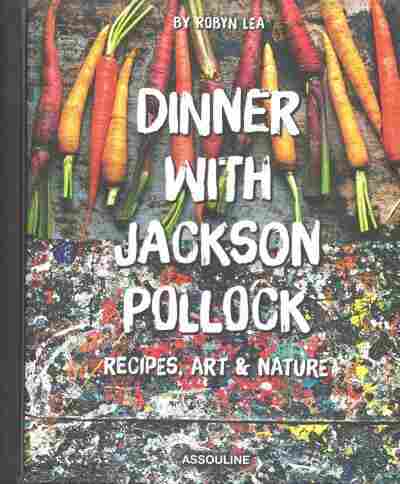 (Recipe as written by Jackson Pollock)

To prepare the filling: Peel, core, and thinly slice apples. Stew apples in a pot with a little water to cover the fruit, plus the sugar and spices, until just cooked. Chill apples in a little of the juice. When cold, sift flour over the apples and stir gently to combine. Set aside.

Preheat oven to 450°F. To make the pie crust: Combine flour, baking powder, and salt. Add butter and cut in until mixture is crumbly. Add egg yolks and mix with enough milk to make a dough. Roll out dough lightly. Place the pastry in a greased 10‑inch round pie dish, allowing pastry to overhang the edge of the pan by about 1 inch; trim away excess dough, roll it into a ball, and set aside to make the top crust. Be sure there are no cracks in the bottom crust; seal them by pressing edges together with fingers. Pour apple mixture into pie shell and distribute evenly.

For a simple top crust, roll out the remaining dough, slide the pastry sheet onto the rolling pin, and unroll it on top of the apple pie filling. Allow top crust to overhang the edge of the pan by about 1 inch; trim away excess dough, then pinch the top and bottom crusts together all around the rim to seal the pie. Prick the top crust with a fork in about a dozen places, or slice a few small openings with a knife, to allow steam to escape. Brush top pastry with egg wash and sprinkle lightly with a pinch or two of sugar.

For a more elaborate lattice-style top, roll out the remaining dough, cut into ½‑inch strips, and weave strips across the top of the filling. Brush lattice strips with egg wash and lightly sprinkle with a pinch or two of sugar.