Accessibility links
Sexy, Simple, Satirical: 300 Years Of Picnics In Art : The Salt From Goya to Banksy, artists through the centuries have tackled modernity and its discontents through depictions of eating outdoors.

As the weather warms up, you might find yourself staring out an office window, daydreaming about what you'd rather be doing: lazing outdoors, perhaps, on a large blanket with a picnic bounty spread before you.

In fact, people have been fantasizing about picnics as a return to a simpler life pretty much since the dawn of urban living, says Walter Levy, author of The Picnic: A History.

"Picknicking coincides with modern history — the shift from pastoral to urban living, the decline of villages and the rise of modern cities," Levy writes. "When you're having a picnic," he tells The Salt, "your intention is to break away from the ordinary."

And nowhere is this escape reverie more visible than in the history of art. 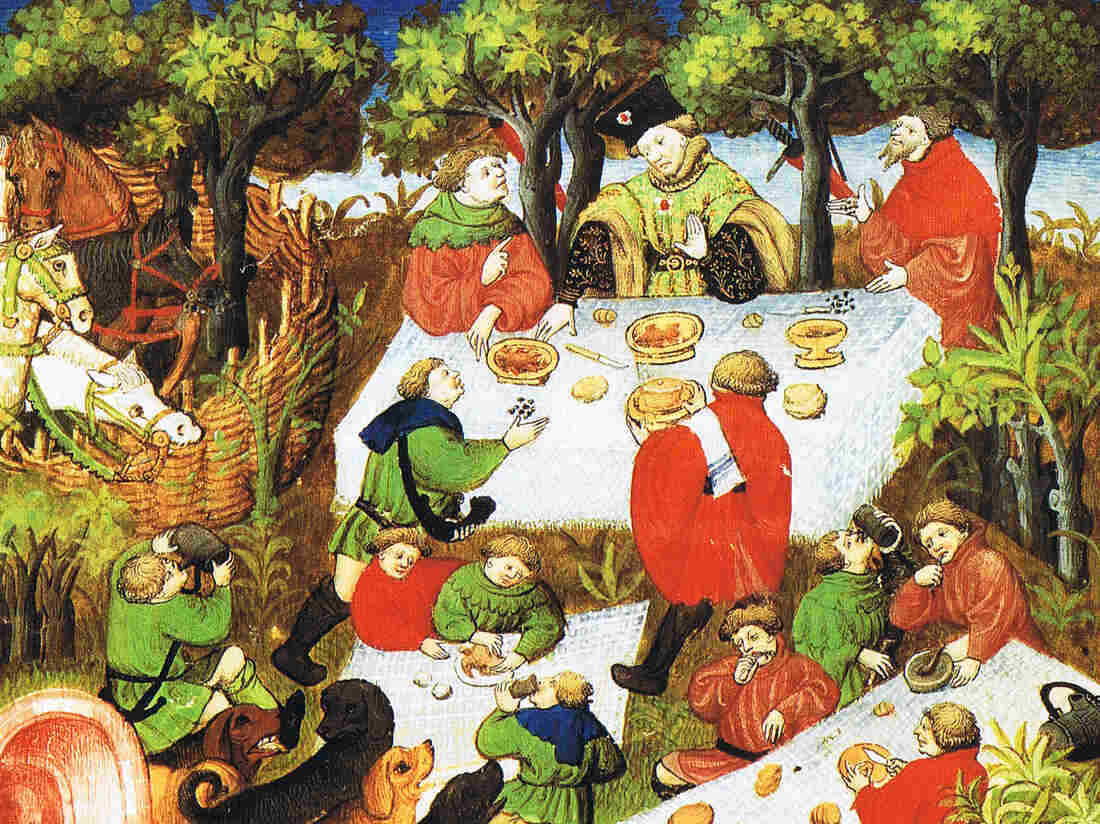 An illustration of noblemen enjoying a feast outdoors, from a French edition of The Hunting Book of Gaston Phebus, 15th century. Wikimedia Commons hide caption 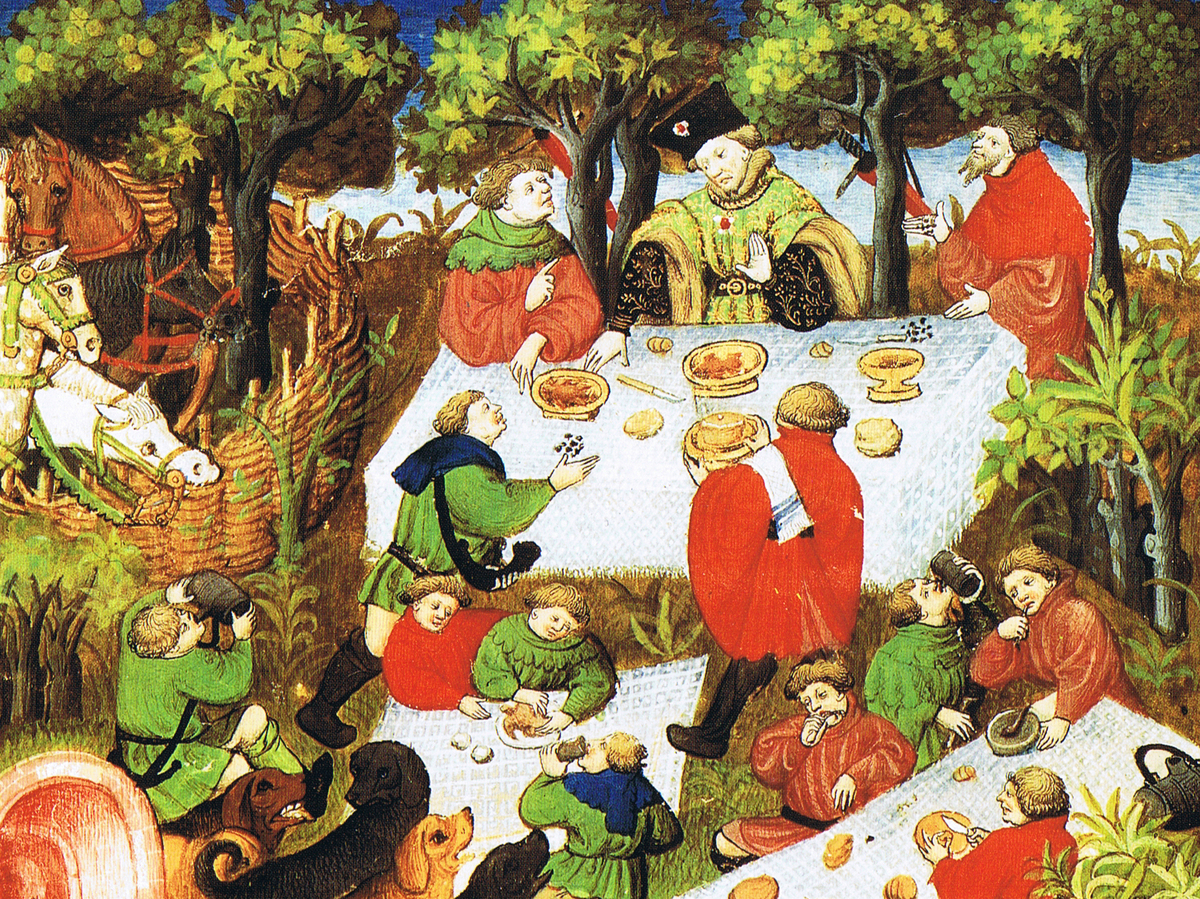 An illustration of noblemen enjoying a feast outdoors, from a French edition of The Hunting Book of Gaston Phebus, 15th century.

Of course, people have been eating outdoors since the dawn of humanity. And medieval hunting parties commonly carried large feasts with them as they rode out. But the picnic as we know it today – as a day outing with the expressed purpose of eating amongst nature — only surfaced about 500 years ago, Levy says.

As dining outdoors became a popular leisure activity, it became a common subject for artists attracted both to the pastoral imagery — and to the wealthy people who embraced the pastime. 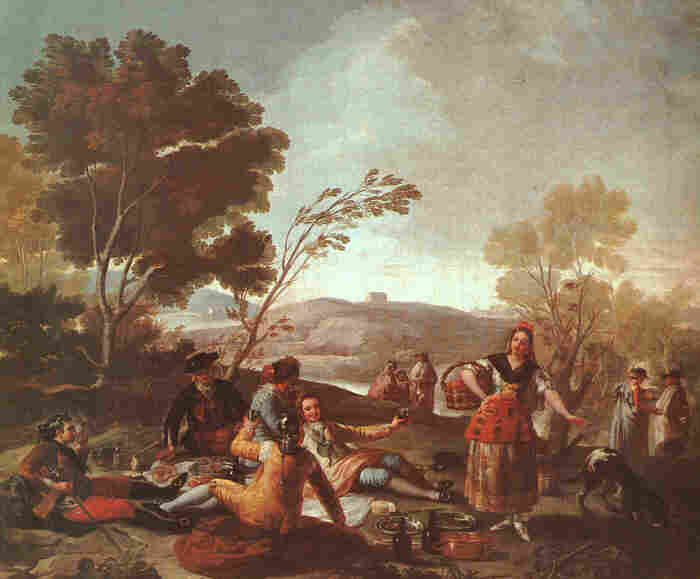 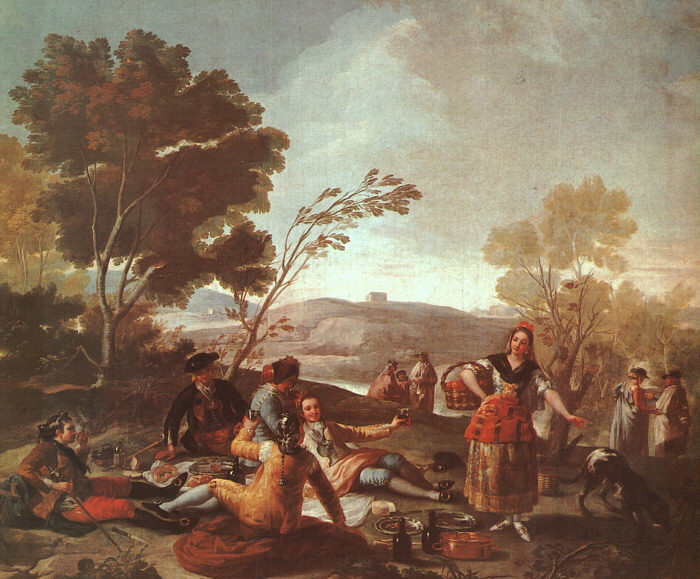 Francisco de Goya's 1776 painting Picnic En La Ribera Del Manzanares (Picnic on the Banks of the Manzanares) is an early example of the picnic in art. The scene it sets might give us picnic-envy today.

Though the painting shows the lower artisan class merrymaking along the river, historically, its own surroundings have been much posher: It was part of a series that hung in El Pardo palace near Madrid. Kenneth Bendiner, author of Food and Art, believes that early picnics represented a fantasy of the simple life — in this case, perhaps a royal romanticizing of the freedoms enjoyed by the rest of us.

The American landscape painter Thomas Cole had similar aspirations with his 1846 painting A Pic-Nic Party. As the Brooklyn Museum (where the painting hangs) describes it, "Cole chose the subject of a picnic to describe the ideal coexistence of nature and civilization." And he ups the fantasy factor: In addition to food, Cole includes women making flower garlands, rather than wearing a hat, as was customary at the time, while a guitarist serenades the picnic party.

But the picnic really came to the foreground of art history with Édouard Manet's 1862 painting Le Déjeuner sur l'Herbe (Luncheon On The Grass). It's considered one of the first examples of modern art. 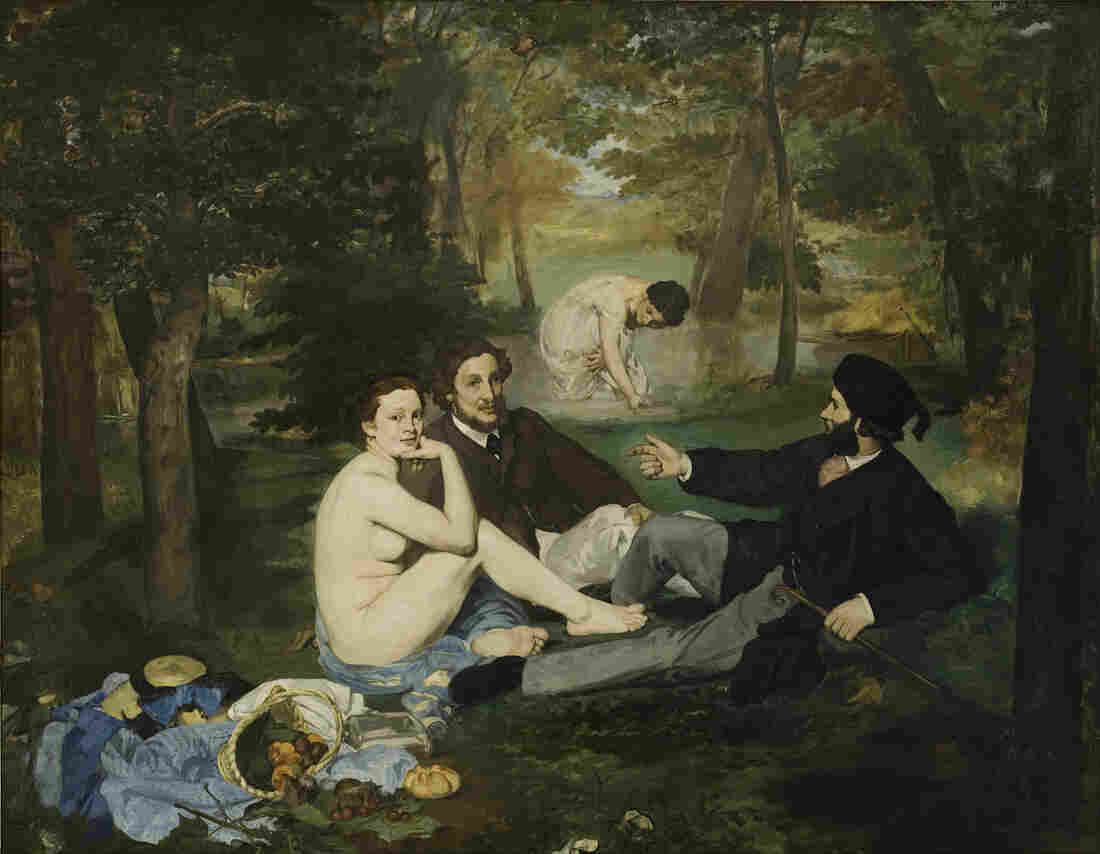 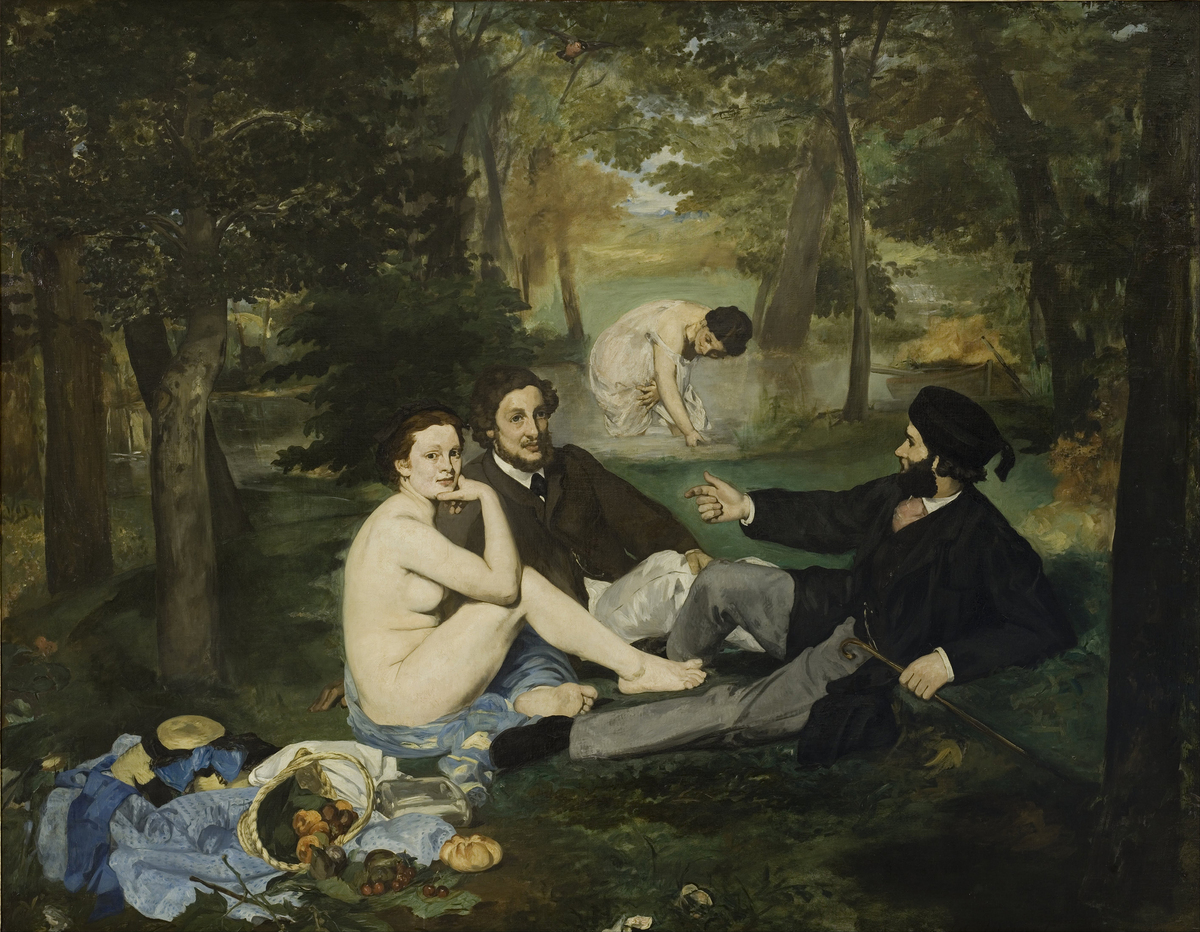 While the depiction of nude women wasn't shocking in itself, placing them in a modern setting, among bourgeois men, certainly ruffled feathers. It dropped the classical ruse that such depictions were of goddesses and suggested instead they might be mere mortals — models or, well, possibly prostitutes, according to the Modernism Lab at Yale. And that nude woman's unabashed, direct gaze! The tumbled foods sitting on a pile of clothing add to the impression that these picnickers weren't merely innocently consuming the contents of that woven basket.

"That aspect is attractive to artists, because it seems that being outdoors raises your libido," says Levy. "It's sort of a release from being urbanized."

Adults weren't the only ones who loved the escape a picnic could provide. "Children's books loved to portray picnics," Levy says. Think of the idyllic picnic Ratty and Mole enjoy by the riverbank in Wind in the Willows. Illustrator E.H. Shepard portrayed them sprawling contently in the sun after consuming a wicker basket full of food. 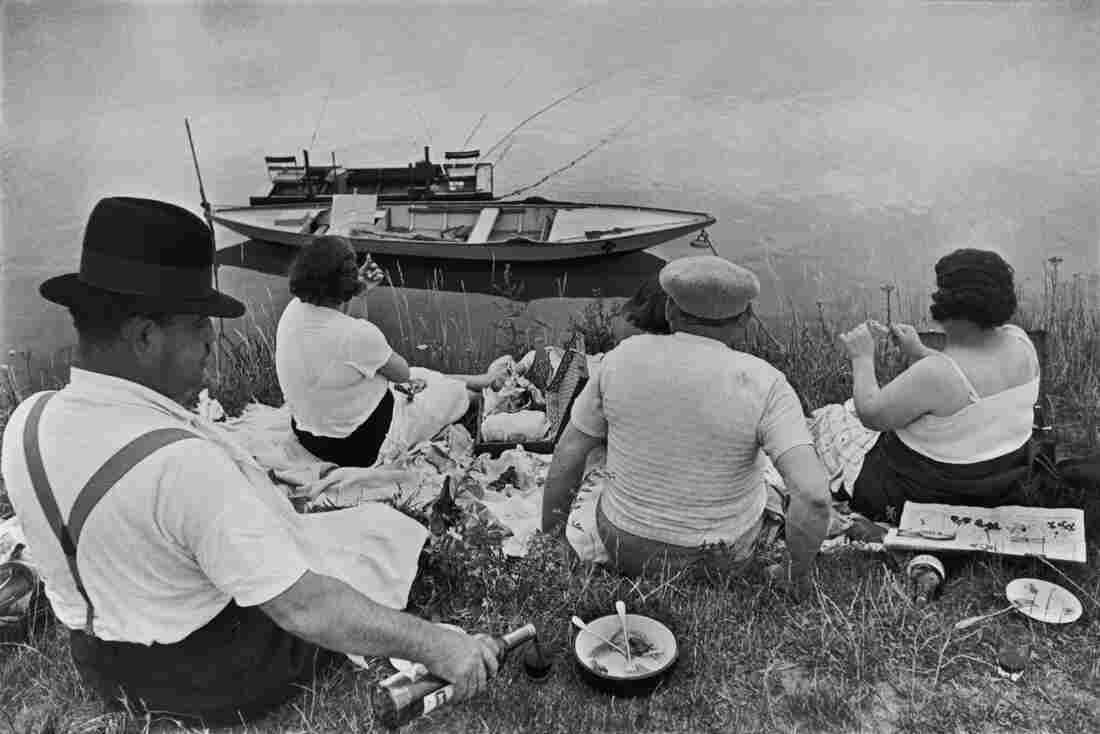 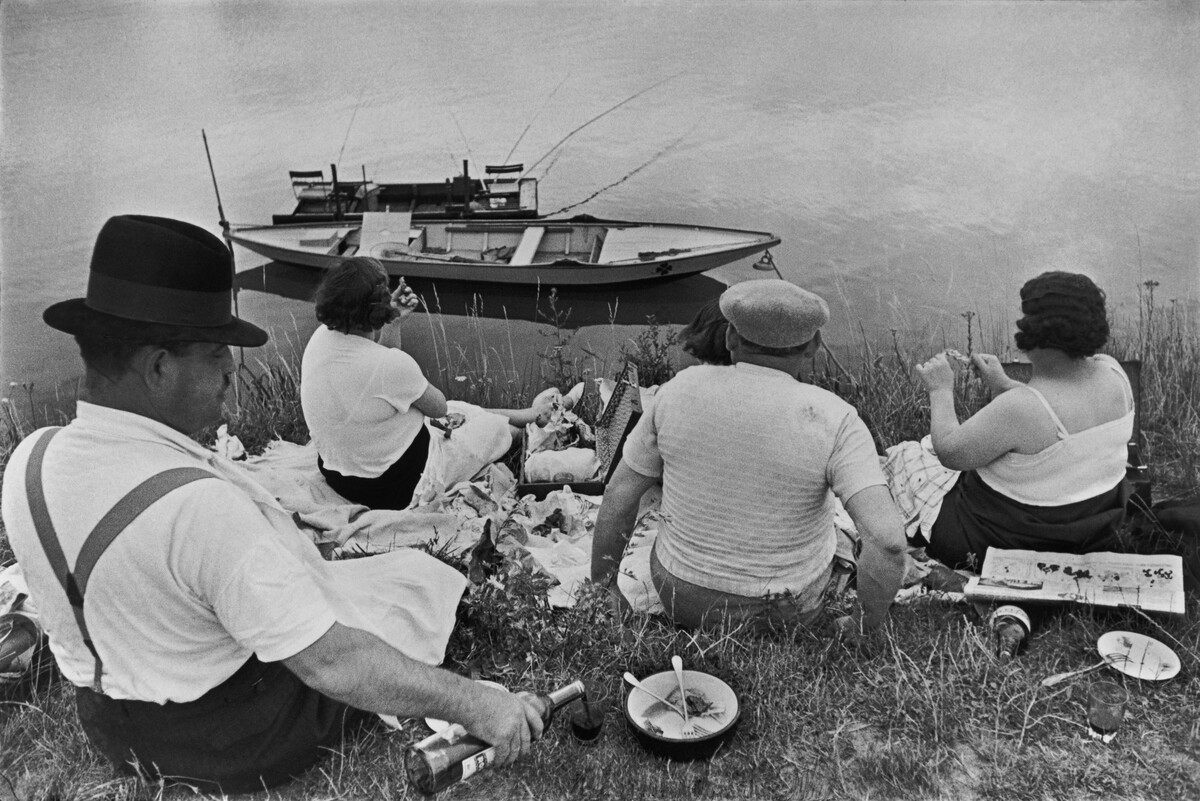 Henri Cartier-Bresson's Sunday on the Banks of the Marne, 1938

By the 1930s, famous photographers were capturing picnickers at their leisure. Henri Cartier-Bresson's photo Sunday on the Banks of the Marne feels almost like a painting come to life. And Levy points to an even more casual depiction of the picnic, loosely defined, in Robert Frank's The Americans. The 1955 photo shows two teenage couples canoodling on a lawn filled with parked cars. It's yet another instance where nature and sensuality intertwine on the picnic blanket.

But starting with the pop art movement in the 1970s, a seismic shift occurred in the depiction of food in art. Instead of shorthand for a pastoral ideal, food became a source of satire, Bender says. "It went against the whole history of food imagery, which was about delight of taste and the joys of consumption," he tells The Salt. 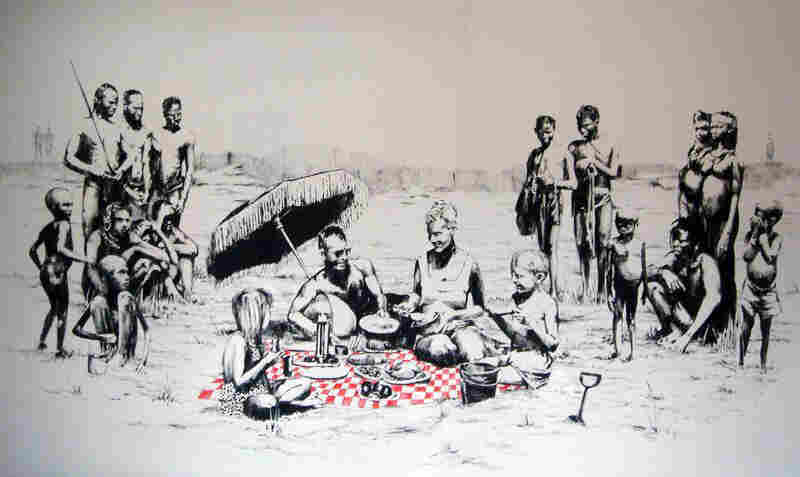 British graffiti artist Banksy's 2005 mural Picnic speaks directly to the separation of nature and civilization that a picnic has always attempted to bridge. In this hyper-modern picnic, the distance between the contemporary picnickers and the hunter-gatherers that surround them seems insurmountable.

Tove Danovich is a writer based in New York.