Accessibility links
These Animals Might Go Extinct Because No One Wants To Eat Them : The Salt Many species have gone extinct because humans hunted them into oblivion for their meat. But there's another group of animals that are endangered because we've lost interest in breeding them.

The Steller's sea cow, the passenger pigeon and the New Zealand moa all went extinct because people developed a taste for their meat.

But other animals are going their way precisely because they are no longer preferred table fare. The Livestock Conservancy, a North Carolina organization that advocates for the preservation of rare and vanishing breeds, keeps an official list of nearly 200 domesticated birds and mammals which today are at risk of vanishing. The group is trying to generate interest in these breeds, among both consumers and farmers, to keep the animals from going extinct.

"We sometimes say, 'You need to eat them to save them — just don't eat them all,' " says Ryan Walker, the marketing and communications manager of the conservancy. 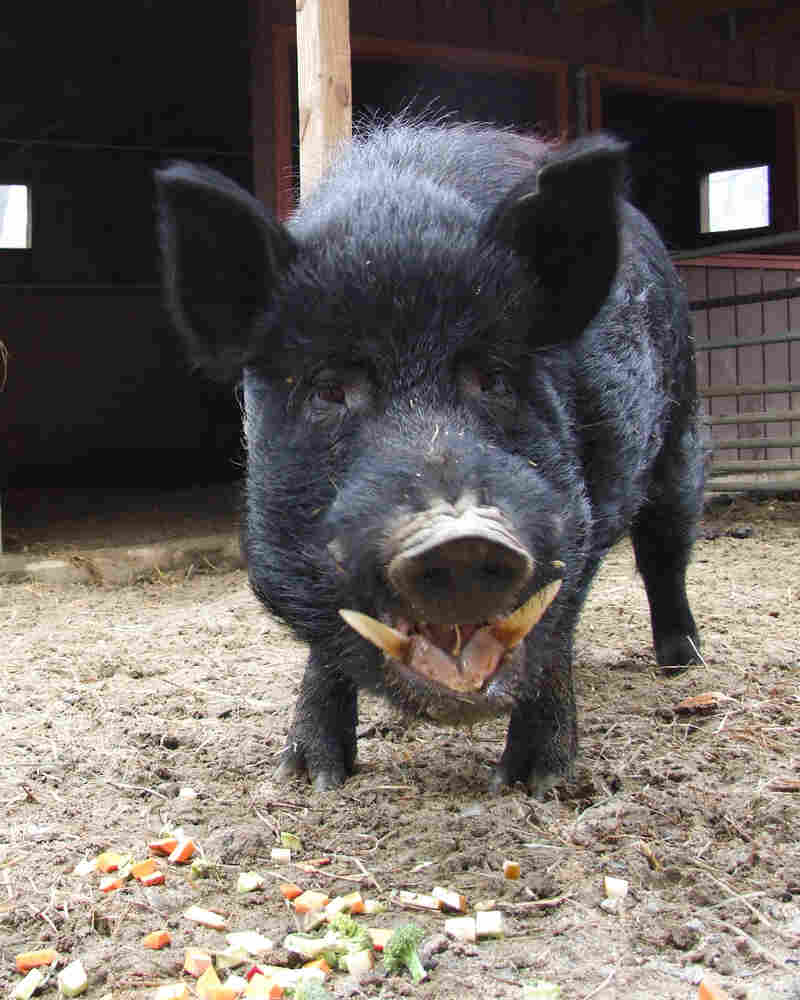 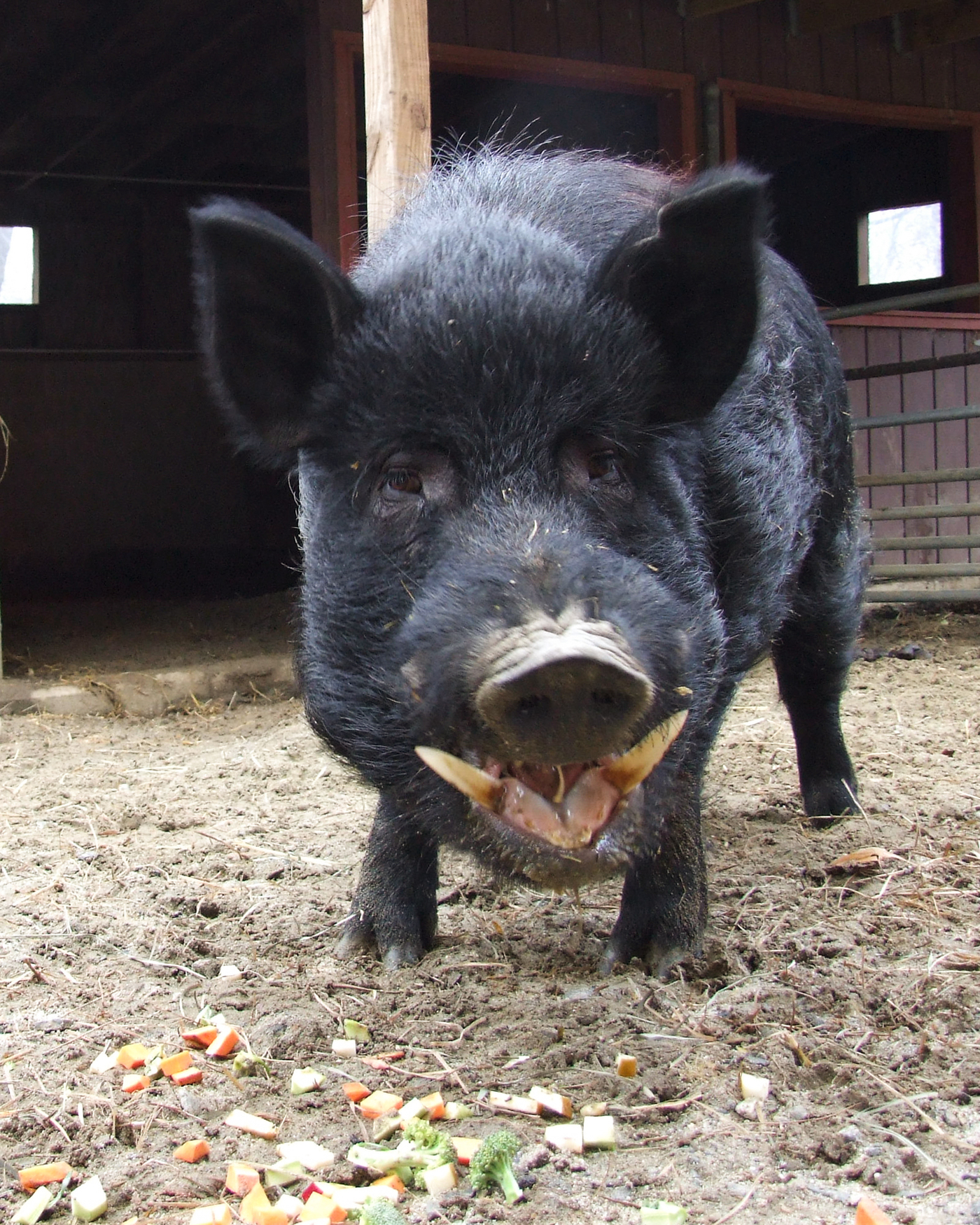 The Guinea hog is a small breed that once produced hams, bacon and lard for farmers in the southeast U.S. But it is now threatened, according to the Livestock Conservancy.

The Red Wattle, a pig with exceptionally juicy flesh, and the Randall Lineback, a cow that produces beautiful rose-red veal, are two success stories — breeds that were close to oblivion but that foodie ranchers have revived.

But others haven't been so lucky. And it may be because lately no one has wanted to eat them.

There are fewer than 200 Choctaw hogs left, for example. This pig was prized by the Native American Choctaw tribe as a meat source. But displacement of the tribe led to the breed's downfall. Today, Choctaw hogs live on just a few farms in a single county in Oklahoma. The animals are still extremely vulnerable to inbreeding and, Walker says, to natural disasters. "They could potentially get wiped out by one tornado," he says.

But Walker says the conservancy has received calls from people around the country interested in rearing the pigs, and he guesses that within several years the breed's population will start to increase. If the Choctaw is lucky, it should start appearing in butcher shops for the first time.

Many, if not most, heritage food animals are said to have a flavor that's distinct from modern mainstream breeds – flavor that can now be appreciated by foodies seeking novelty and quality. But many of these breeds have been swiftly declining since about 70 years ago, when certain breeds began to dominate industrial livestock production.

Before World War II, farms were on average smaller and regional variations common in both crops and livestock. But one by one, regional breeds were supplanted by just a handful that were selectively bred to reproduce and grow faster, withstand more cramped confinement, and generate more meat, milk or eggs.

Meanwhile, hundreds of livestock breeds that were once commercially relevant have nearly vanished. Among them are several dozen that The Livestock Conservancy lists as critically endangered—like the Texas longhorn cattle, the cotton patch goose, the modern game chicken and the San Clemente goat, which originated on the rugged San Clemente Island, in the Channel Islands chain off California. Through genetic isolation and natural selection, a unique breed emerged. The nonnative goats became a hated pest in the 1970s, and most were removed from the island or shot. Still, a few are raised on a small scale for food, mostly in the Southwest.

Sometimes, breeds believed to be lost are rediscovered—like the Beltsville small white turkey. It was thought extinct until 2014, when the Livestock Conservancy discovered that scientists with the University of Georgia were keeping a small research flock.

Heritage Turkeys: To Save Them, We Must Eat Them

"They didn't even realize what they had until we saw the turkeys," says Walker. "We thought the breed was extinct, and now they're back on the table," as heritage breeders are working to restore them to abundance. This process involves matching up prospective mates and selectively removing other individuals from the breeding pool. Ultimately, several "very lucky farmers" got to eat Beltsville small whites last Thanksgiving, Walker says.

The key to saving critically endangered breeds is finding people to breed and grow the populations. Walker says his organization, without land to rear its own animals, helps rare breeds by coordinating meetings between farmers who own the animals. 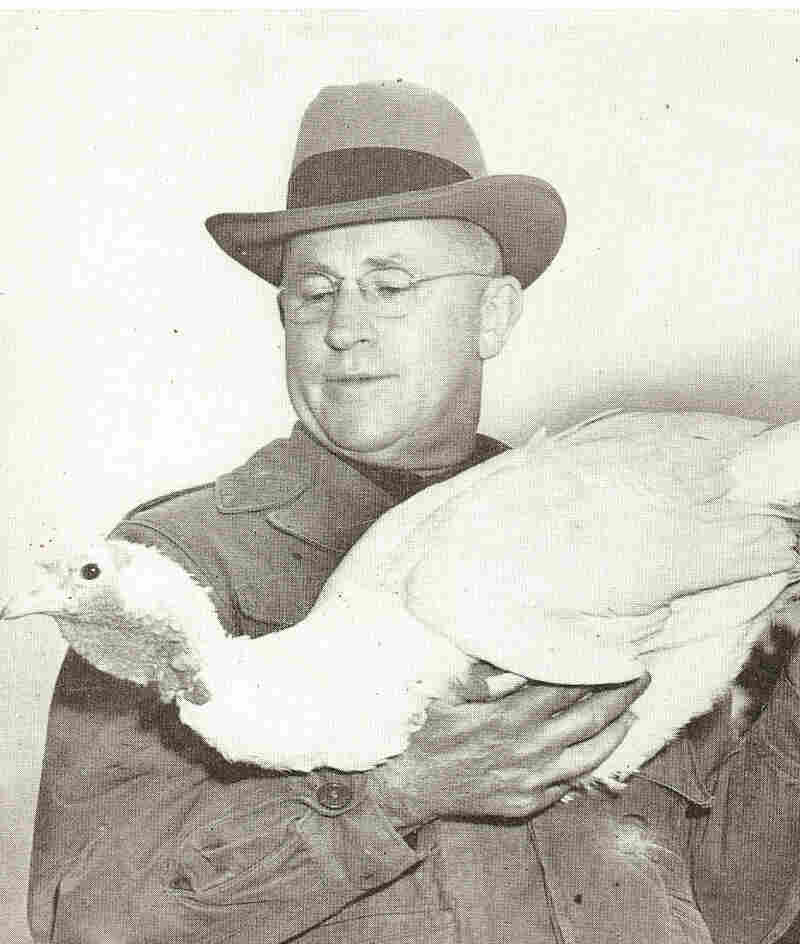 Stanley Marsden, a U.S. Department of Agriculture scientist, with the Beltsville Small White turkey, a breed he developed beginning in 1929. The breed now is critically endangered but making a small comeback. The Livestock Conservancy hide caption

Other times, small farmers strike out on their own to get their hands on rare breeds and grow their own herds. Several years ago, Amy Grabish and her husband Larry Fox contacted the American Mulefoot Hog Association, hoping to start their own passel. They bought several animals, and today they keep about a dozen pigs but also fainting goats, Welsh harlequin ducks and American buff geese.

Raising such animals is not especially profitable, Grabish says, since some of them grow more slowly, and in some cases are more temperamental, than mainstream breeds. Fainting goats, for example, fall over when startled.

But she and her husband chose to raise heritage breeds partly because they are hardier than mainstream breeds.

"We wanted animals that would be comfortable outside," Grabish tells The Salt. Her mulefoot pigs have a coat of hair that protects them from sunburn in the summer and keeps them warm in the winter. Though the animals are provided with a shed, they don't use it. "They just hunker down under the eucalyptus trees," she says.

Today, in spite of the efforts of numerous ranchers and organizations focused on preserving rare breeds, some are going extinct. Almost one livestock breed has vanished every month around the world for at least the past six years, according to the United Nations Food and Agriculture Organization.

The U.S. Department of Agriculture supports a program for preserving heritage livestock breeds. The idea is to keep alive unique genetic traits that could someday come in handy for breeders who are trying to create hardier, or tastier, animals. In the American West, Walker says, demand is growing for drought tolerant cattle that can withstand the unusually dry conditions that may become the new normal going into the future. While many rare breeds are kept alive on small farms, the USDA has preserved some cryogenically—mainly via samples of frozen semen.

Farmers like Grabish and Fox are doing their part to keep rare breeds alive, though Grabish says they are reluctant to put their animals in contact with those from other farms, due to concerns about disease transmission. Their own little property provides only enough land to keep a few animals, which ultimately are used to supply the family's own freezer and a circle of local restaurants. When they sell breeding stock to other farmers, their hope, Grabish says, is that the new owners will use the animals for breeding with others of their type.

"Because these animals are so rare, their genetics need to be kept clean," she says, "for science and for the gene pool."