Accessibility links
Tea Tuesdays: From The Blue Zones, Tea-Drinking Tips For A Longer Life : The Salt Researchers studying the Blue Zones, five regions around the world with lots of centenarians, have come up with this rule: "Drink coffee for breakfast, tea in the afternoon, wine at 5 p.m." 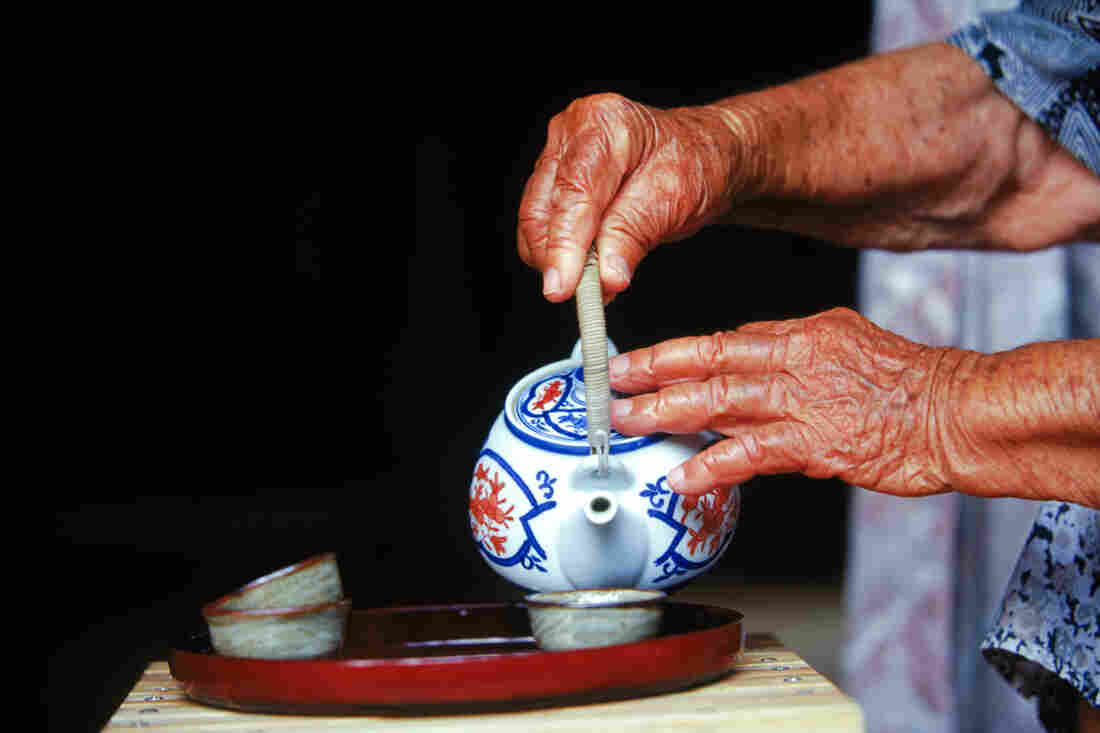 In the Blue Zone of Okinawa, Japan, locals drink green tea with jasmine flowers and turmeric called shan-pien, which translates to "tea with a bit of scent." David McLain/Courtesy of Blue Zones hide caption 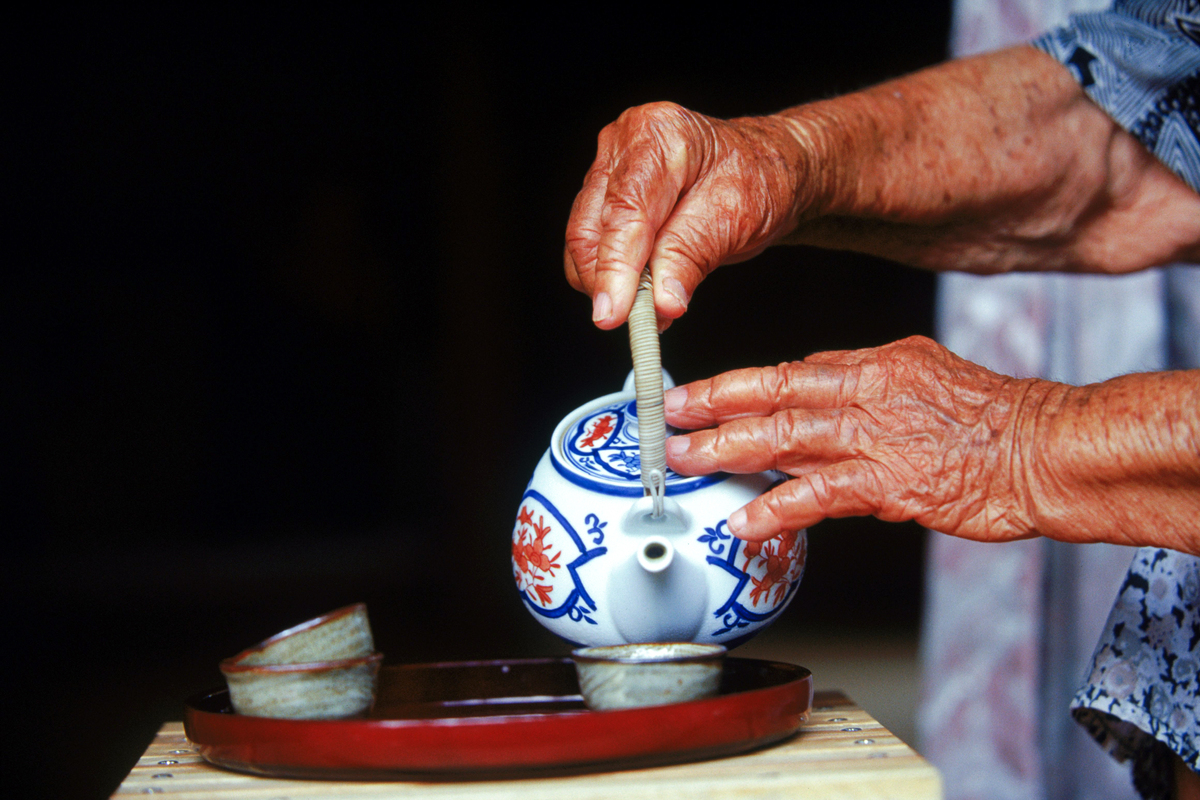 In the Blue Zone of Okinawa, Japan, locals drink green tea with jasmine flowers and turmeric called shan-pien, which translates to "tea with a bit of scent."

As we reported earlier this month, a fascinating project called Blue Zones is documenting and disseminating the lifestyle secrets of the communities with the highest concentrations of centenarians in the world.

The people in these five regions in Europe, Latin America, Asia and the U.S. that live to be 100 have a lot going for them. Genes probably play a small role, but these folks also have strong social ties, tightly-knit families and lots of opportunity to exercise. 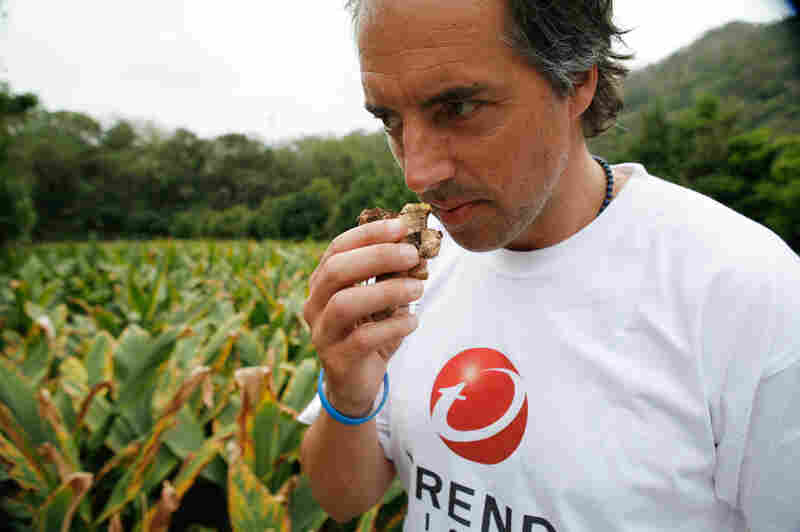 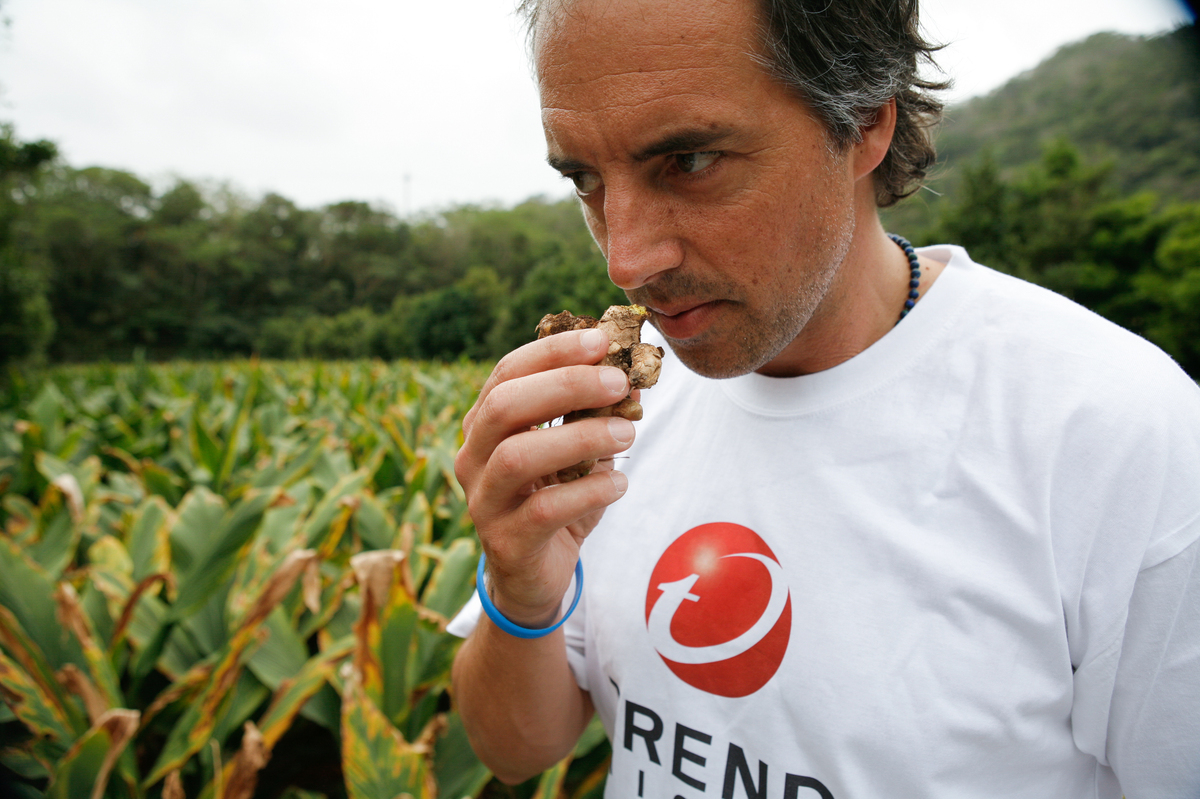 As we were parsing through the dietary secrets of the Blue Zones, as described in author Dan Buettner's latest book, The Blues Zones Solution, we were struck by how essential tea drinking is in these regions. In fact, Buettner's Blue Zones Beverage Rule — a kind of guideline distilled from his 15 or so years of studying these places — is: "Drink coffee for breakfast, tea in the afternoon, wine at 5 p.m."

In Okinawa, Japan, for example, Buettner watched one 104-year-old "make jasmine tea, squatting in the corner and pouring hot water over tea leaves as the room filled with a delicate, floral aroma." Indeed, Okinawans call their tea shan-pien, or "tea with a bit of scent," which combines green tea leaves, jasmine flowers and a bit of turmeric.

And, of course, science has plenty to say about the healthful virtues of green tea. Researchers are most smitten with catechins, antoxidants that show up in green tea, as well as foods like cocoa. Why might they help so many Okinawans break 100? Catechins and other compounds in green tea can lower the risk of stroke, heart disease and several cancers. One review study also found that drinking green tea slightly boosts metabolism. 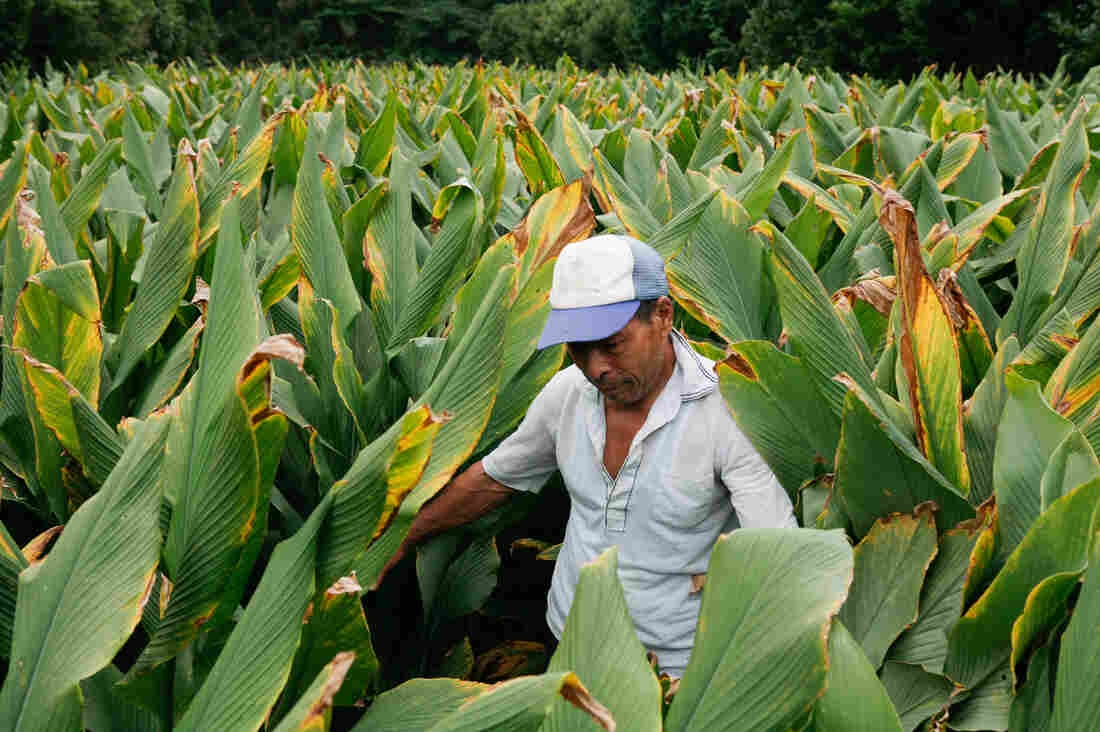 Ginger's golden cousin, turmeric, figures prominently in the Okinawan diet in both food and tea. Studies suggest it is a powerful antioxidant and anti-inflammatory. Gianluca Colla/Courtesy of Blue Zones hide caption 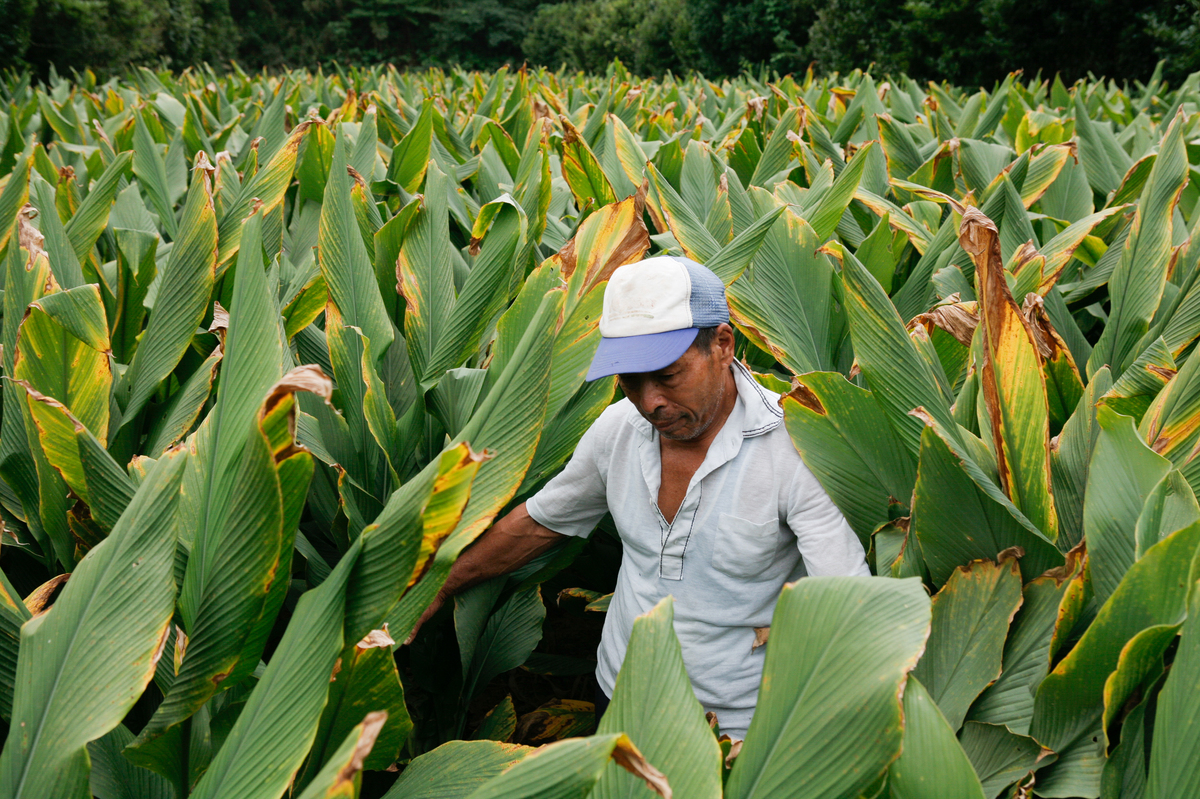 Ginger's golden cousin, turmeric, figures prominently in the Okinawan diet in both food and tea. Studies suggest it is a powerful antioxidant and anti-inflammatory.

If you find yourself on the island of Ikaria, the Greek Blue Zone in the middle of the Aegean, you won't be offered any tea made with tea leaves. Instead, Ikarians typically brew their daily cup of tea with just one fresh herb that they have picked themselves that day — either rosemary, wild sage, oregano, marjoram, mint or dandelion, all plants that may have anti-inflammatory properties.

Buettner tells The Salt that he took samples of Ikarian herbs to pharmacologists in Athens to have them analyzed. "Turns out, they were anti-inflammatories and mild, or mildly strong diuretics," which help lower blood pressure, he says. This could explain Ikaria's very low dementia rate, he adds, since high blood pressure is a risk factor for the disease.

According to Thea Parikos, an Ikarian who runs a guesthouse there, the people of the island use herbs and teas as medicine and will drink them for various ailments before going to see a doctor. (If the condition worsens, they will seek medical attention, she says.)

"We often drink a tea with friends or in the evenings," she tells us by email. "The teas we use are collected in the wild. We are not so enthusiastic on store-bought tea. We consider the wild plants to be of better quality."

Hear that? So rather than run to the store in search of Ikarian Longevity Tea (it doesn't exist), grow or buy fresh herbs and make your own tea with them.

In Sardinia, the preferred tea is milk thistle, a native wild plant that Buettner writes is said to "cleanse the liver." The plant's principal active ingredient, silymarin, is being analyzed by scientists as an antioxidant. One 2007 review paper noted that, "Promising results have been reported in the protective effect of milk thistle in certain types of cancer, and ongoing trials will provide more evidence about this effect." So those Sardinians, who've been drinking this tea for centuries, may have figured out one small hot fountain of youth.

If you want to get more tea into your routine, here's what Buettner recommends: