Accessibility links
When You Make Kids' Meals Healthier By Default, They Still Eat 'Em Up : The Salt When a restaurant chain revamped its kids' menu, making items like strawberries and salad the default sides instead of fries, it improved the healthfulness of meals ordered — by a lot, a study finds.

When You Make Kids' Meals Healthier By Default, They Still Eat 'Em Up

When You Make Kids' Meals Healthier By Default, They Still Eat 'Em Up 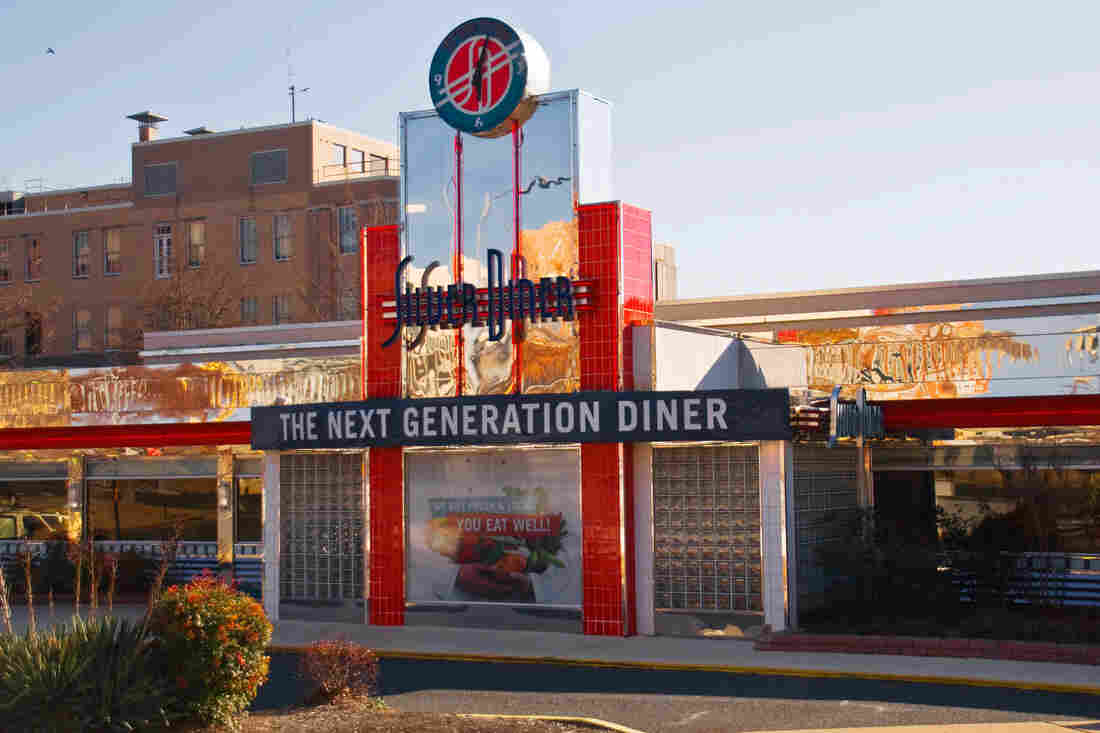 Will a kids' meal sans fries and soda still tempt the youngest diners at restaurants?

Chef Ype Von Hengst certainly thinks so. He's the co-founder of Silver Diner — a chain of fast-casual restaurants in Virginia and Maryland.

Customers want healthier options for their kids, Hengst says. "We tempt them with the stuff they like, but we make sure it's also good for them," he says.

Back in 2012, Silver Diner completely overhauled its children's menu, offering options like teriyaki salmon and quinoa pancakes alongside diner classics like chicken tenders and grilled cheese. The chain also took fries and sodas off the kids' menu (though customers can still request those items), and it made healthy side items like salads and strawberries the default options.

"This was a huge hit, I think," he says. "I think everybody — moms and kids — appreciated this."

Researchers with ChildObesity180, at Tufts University Friedman School of Nutrition, got wind of the changes Hengst was planning, and they wanted to know if he was onto something. So they tracked what families ordered at all of Silver Diner's locations during the six months before and after the kids' menu changed — some 350,000 children's meals in all. The results were published Tuesday in the journal Obesity. 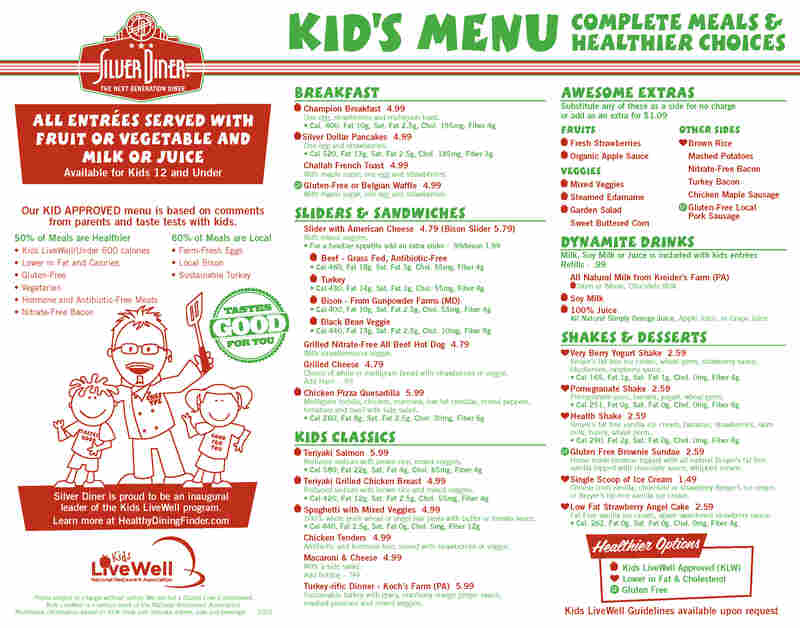 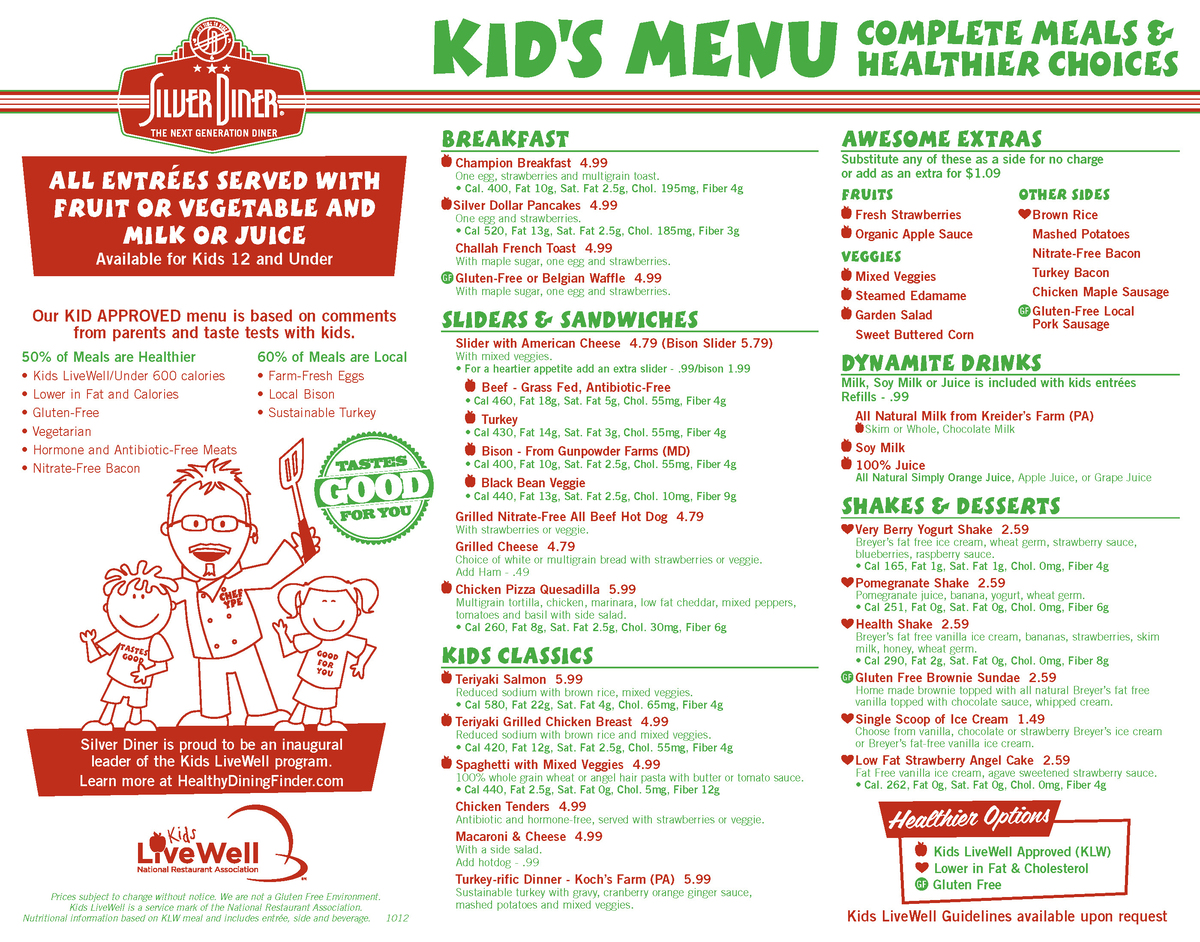 "What we found was that this new menu was really working for them," says Stephanie Anzman-Frasca, a research associate and adjunct professor of nutrition at Tufts University, who led the study.

And while 57 percent of customers ordered French fries for their kids off the old menu, only 22 percent still requested fries after they disappeared from the menu. All told, about 40 percent of customers stuck with the default side dishes — regardless of whether the sides were fatty or healthy.

"There's actually a lot of research done in other contexts that shows that people always tend to choose the default. They don't like going out of their way to choose something else," Anzman-Frasca notes. So if strawberries and salads are the automatic choice, most parents and kids are going to be happy with that, she says.

Although the average price of kids' meals increased by 19 cents after the health-conscious overhaul, most customers didn't seem to notice the difference, Anzman-Frasca adds. The restaurant's revenues consistently increased during the study period.

"This shows that restaurants shouldn't worry about disappointing their customers and losing profits if they change their menus," Anzman-Frasca says.

It also shows that kids' palettes are more sophisticated than we'd expect, she says. "We're starting to see in this study that kids are open to more things than we give them credit for."

Hengst agrees. "Let me tell you, the kids lost it for our low-sodium teriyaki salmon," he says. "And meanwhile, moms were like, 'Wow! I didn't even know my kid liked salmon.' "

Silver Diner's success comes as no surprise to Margo Wootan, the director of nutrition policy at the Center for Science in the Public Interest, a nonprofit consumer group that advocates for healthier foods.

"If you're a parent and you're at a fast-food restaurant, it's likely that you're tired, and [the kids have] just finished soccer practice," she says. "You're going to order whatever is easiest."

When restaurants make healthy options visible and easy to order, customers tend to respond well, Wootan notes. "So why not make healthy choices easy and automatic?"

A growing number of food purveyors are coming around to Wootan's point of view.

Disney Resorts recently changed its children's menus so that meals automatically come with fruits or vegetables and a healthful beverage. Burger King's kids' meals now all come with apples and milk instead of fries and soda by default. And lots of other fast-food chains –- including McDonald's and Wendy's –- have made similar swaps and dropped soda from their kids' menus (though parents can still order them).

"And, you know, the kids don't notice these changes, because they're really just in it for the toys," Wootan says.

"Healthier kids' meals is one of the hottest trends in the restaurant industry right now," Wootan says. "But progress is so very slow."