Accessibility links
Tea Tuesdays: Butter Up That Tea, Tibetan-Style : The Salt Yak butter tea is often referred to as the national drink of Tibet. It's been consumed in the Himalayas for centuries and helped inspire the Bulletproof Coffee craze in the U.S. 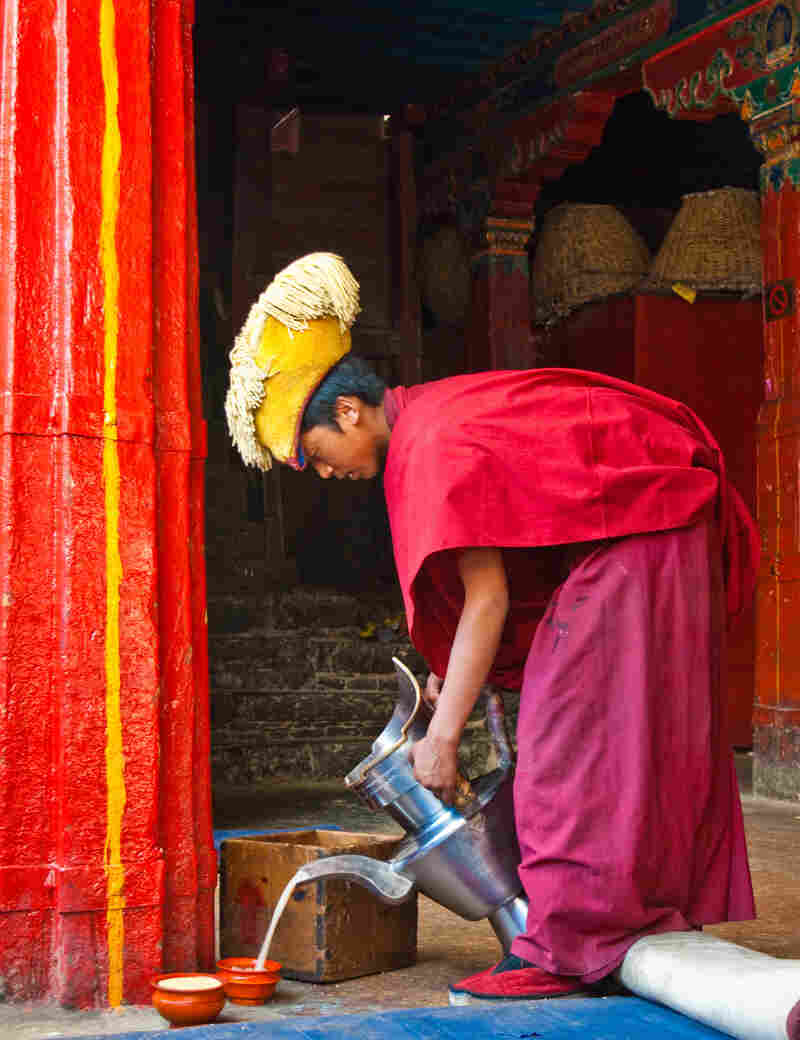 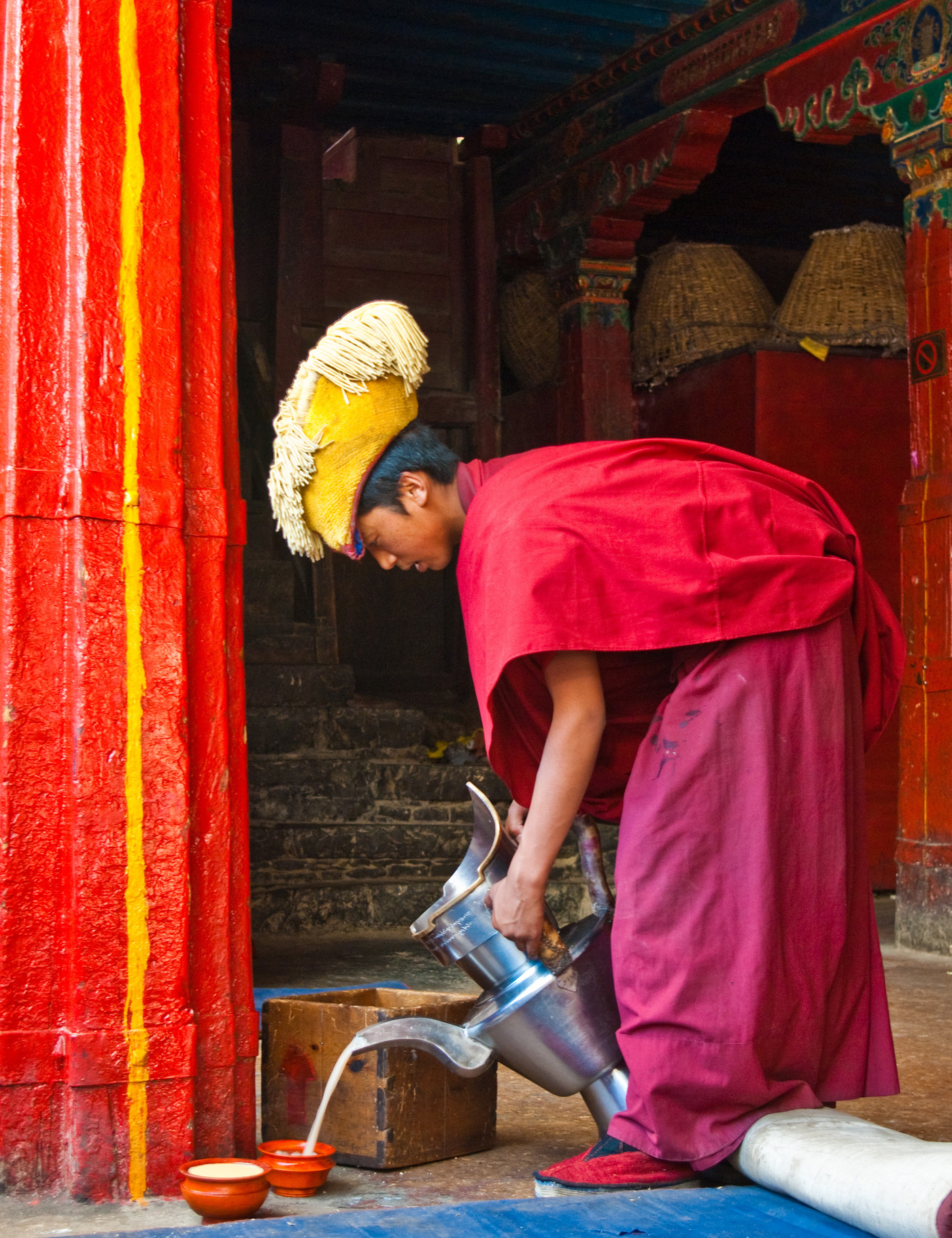 A monk pours butter tea at the Tashilhunpo Monastery in Tibet.

Butter (arguably) makes everything better – even tea. For Chime Dhorje, who works at Café Himalaya in New York City, the butter in the cup of tea before him ideally comes from a yak.

Yak butter tea is often referred to as the national drink of Dhorje's homeland, Tibet. Tibetans drink it all day long — up to 60 cups a day, it's said — though they're not the only ones who enjoy it: It's consumed in countries throughout the Himalayas.

In those lofty Himalayan mountains, a few cups of yak butter tea would be a welcome respite from the cold, thin air. And Dhorje tells The Salt that butter tea, or po cha, is a comforting reminder of home. But yak butter is pretty hard to come by in New York. So Dhorje, and anyone who orders it at Café Himalaya, has to make do with butter from a cow.

Back in Tibet, yak butter is plentiful; yaks have been a prime source of milk, meat and fiber for thousands of years. Yaks are well-suited to Tibet's rugged landscape, high altitude and extreme weather. They're also not picky eaters and have thrived there since they were first domesticated around 800 B.C.

Making butter tea the traditional way is a time consuming process. First, you'll need a brick of tea — most recipes call for Pu-erh or Pemagul black tea. You'll crush it, soak in cold water and then boil it for multiple hours. Once the tea has steeped, it goes into a long wooden churn referred to as a cha dong. Then, butter, milk and salt are added and churned until thoroughly mixed. Luckily, modern Tibetans can speed up the process by using loose leaf tea and a blender.

Butter tea likely became a staple of the Tibetan diet soon after tea was introduced to the country during China's Tang dynasty (618-907 AD). In The Story of Tea, authors Mary Lou and Robert Heiss describe how a Chinese princess was married to the king of Tibet, opening up tea and other trade between the two countries.

The introduction of this hot beverage to Tibet "provided them with warmth and supplemented their meager diet," the Heisses write. And while no one knows exactly when yak butter was added for the first time, it's likely that it didn't take long.

In addition to the warmth it provides, butter tea may be an important part of cold, high-altitude diets. Above 10,000 feet, the human body loses water roughly twice as fast as it would at sea level, making the risk of dehydration high. The addition of salt to this tea helps Tibetans (and non-natives) stay hydrated in the cold Himalayan Mountains. 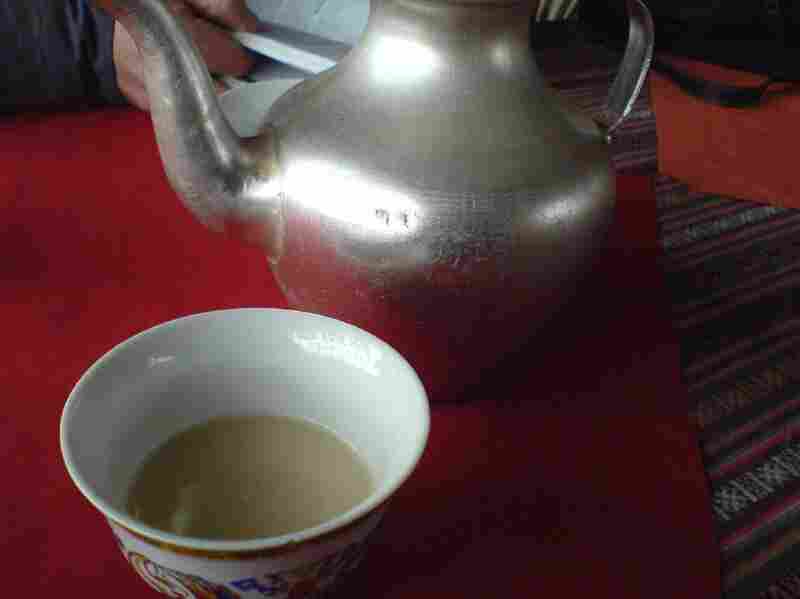 Yak butter tea is yellowish in color and has the consistency of soup. The Gonger/Flickr hide caption 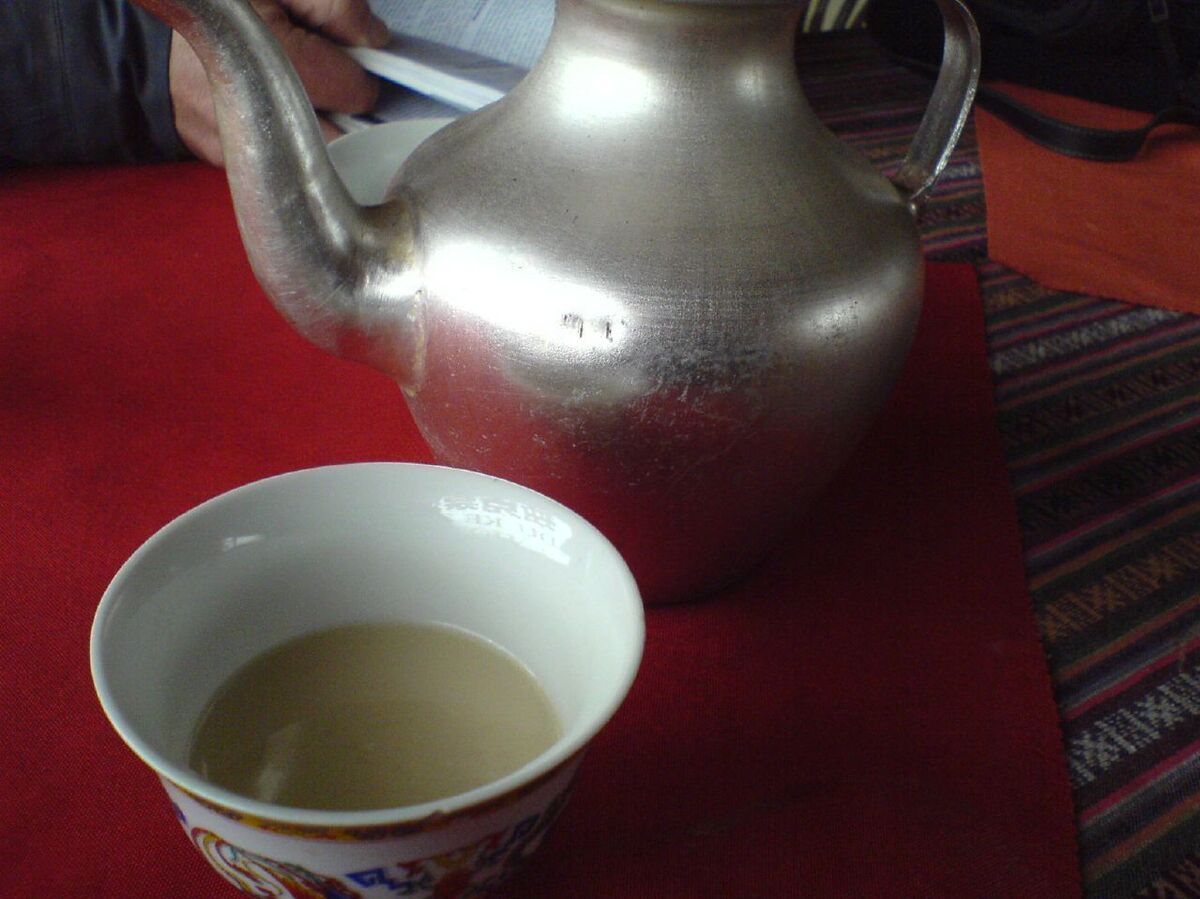 Yak butter tea is yellowish in color and has the consistency of soup.

The tea is such a large part of their diet that, until recently "every Tibetan owned a por pa or tea bowl," writes Rupert Faulkner, an author and senior curator at the Victoria and Albert Museum in London, in his book Tea East & West. He adds that the bowls even snugly fit into the pocket of the chupa, a traditional piece of clothing worn by men and women alike.

Today it's more common to see Tibetans drinking their butter tea from thermoses. It's also part of Tibetan hospitality to offer guests a bowl of butter tea, which is a yellowish color and has the consistency of soup. And a good host will refilling the bowl to the brim again and again until it's time for goodbyes — at which point a polite guest will drain what's left.

To the Western palate, yak butter may taste strange at first, perhaps because resilient yak can survive on a meager diet of grasses and shrubs. This makes for a very different taste than the sweet butter we're used to, produced by corn-fed cows. The Heisses describe the yak butter tea as having an "oily and fatty texture which coated our mouths."

One Westerner, however, was deeply inspired by yak butter tea, so much that he started a company riffing off the idea. Heard of Bulletproof Coffee? It was "invented" by Silicon Valley entrepreneur and investor David Asprey after he tried yak butter tea in Tibet. It combines grassfed-butter, oil and coffee into a breakfast of champions Asprey claims will suppress the appetite and give your brain a boost. (Many are dubious of these claims; read Gizmodo's takedown here.)