Accessibility links
Seattle Restaurants Scramble To Pay A Higher Minimum Wage : The Salt Business has been good for Seattle restaurants as high-tech firms flourish. But the city's rising minimum wage has restaurant owners struggling to revise their business plans. 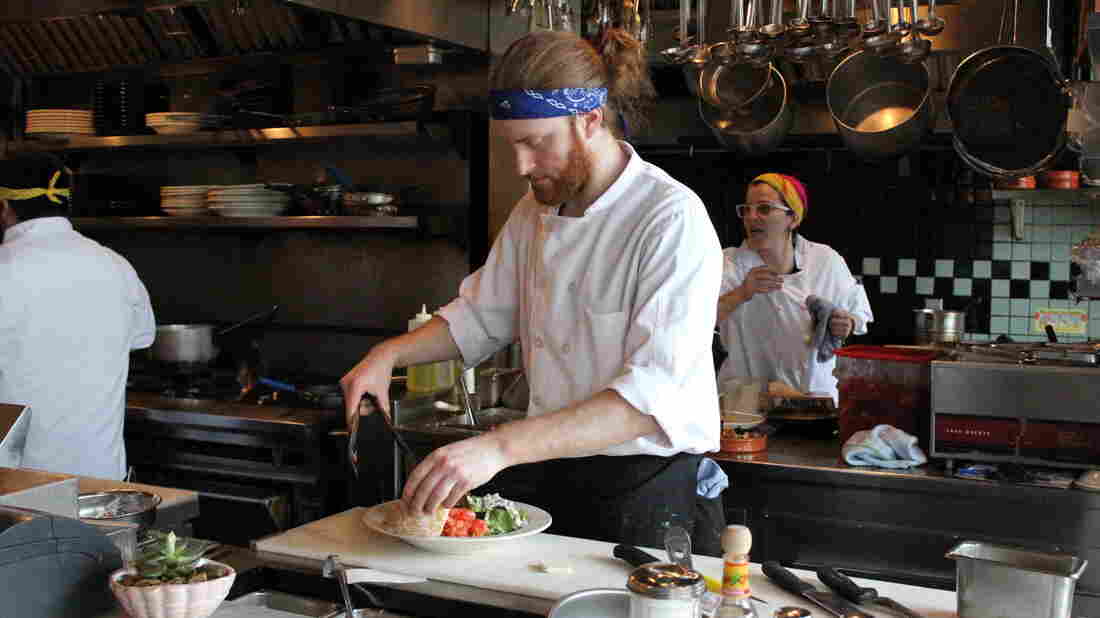 Carter Jorgensen, with head chef Zephyr Paquette in the background, at Seattle's Coastal Kitchen. Restaurants are one of the largest employers of low-wage workers in the city. Deborah Wang/KUOW hide caption 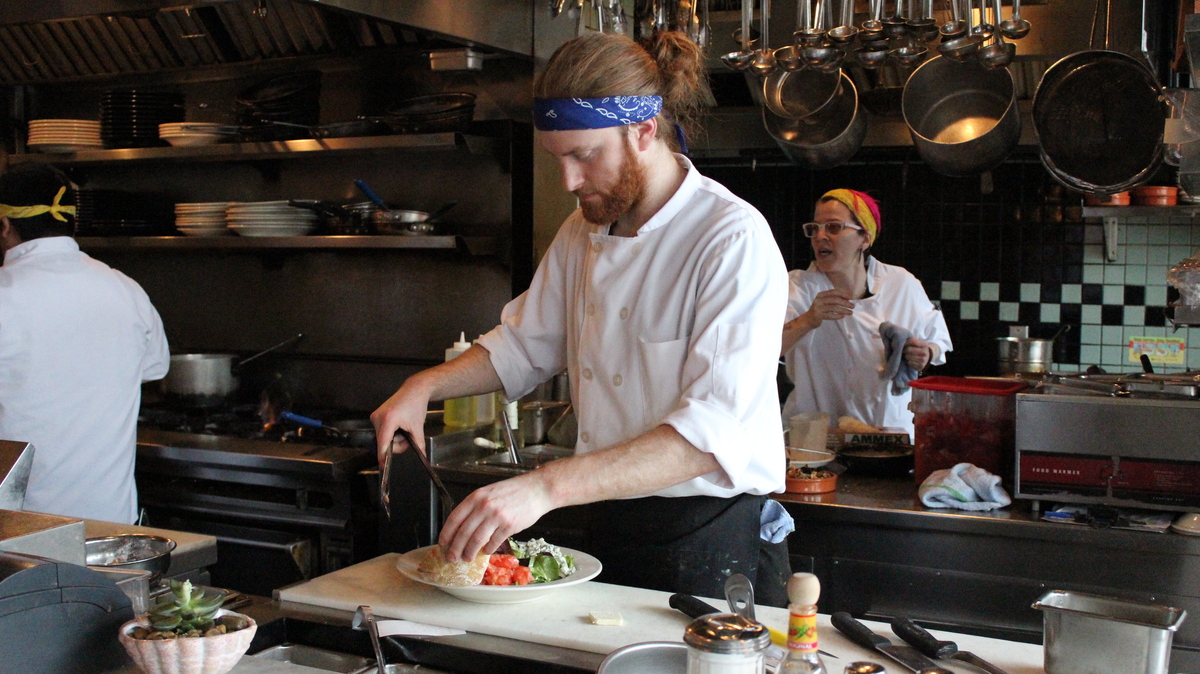 Carter Jorgensen, with head chef Zephyr Paquette in the background, at Seattle's Coastal Kitchen. Restaurants are one of the largest employers of low-wage workers in the city.

In the rough and tumble world of restaurants, Jeremy Hardy considers himself something of a survivor.

Hardy's restaurant, Coastal Kitchen, has been a fixture of Seattle's Capitol Hill neighborhood for 20 years. Notoriously low-margin businesses, restaurants have a high failure rate. Hardy says even in good times, running one is like juggling with clubs.

"With the labor pressures that are coming from this $15 eventual minimum-wage increase, we are juggling with razor-sharp daggers," Hardy says. "And if you don't get it right, it's really going to hurt."

Restaurants in Seattle are booming. Amazon and other tech companies are on a hiring spree, and that's been like manna from heaven for the city's more than 4,000 eateries.

But in April, the city's minimum wage rose to $11 an hour, and it will keep rising every year to $15 an hour and beyond. Restaurants are now scrambling to figure out how they will pay.

No major city has ever seen an across-the-board 60 percent increase in its minimum wage. Restaurants employ about a quarter of Seattle's minimum wage workers. Labor typically accounts for about a third of a restaurant's costs.

Hardy says he is making adjustments: trimming staff hours, opening one hour later and closing one hour earlier. He's also considering whether to close some hours during the day.

"I'm going through the hourly sales, and if it is not making money, if it is not profitable, we are not going to do it, because we can't afford to," he says.

Hardy is a small employer, so he has a few years to figure out what to do. The $15 wage will be phased in at different rates for different size employers over the course of several years.

The biggest pressures will be on large employers, who reach $15 an hour sooner. They are the ones now making the most dramatic changes.

Bob Donegan, the president of Ivar's, which runs a chain of fish and chip shops, says the company has increased its prices. At Ivar's Salmon House, for instance, one of the company's sit-down restaurants, the price for all menu items increased 21 percent in April.

The catch is that when diners pay the bill, they are no longer expected to leave a tip: it's included. The big price increase will allow the Salmon House to start paying a $15-an-hour minimum wage immediately, three years ahead of schedule.

"It's very early, but so far it's working OK," Donegan says.

Many restaurants in the city are watching Ivar's to see if the changes work and if they should follow suit, he says. But not every restaurant is in a position to experiment.

Ritu Shah Burnhamm, who owns a zpizza, employs 12 people. But because her business is a franchise, the city considers her a large employer. That means she has to pay $1.50 an hour more this year, $2 more next year and another $2.00 an hour more the year after. 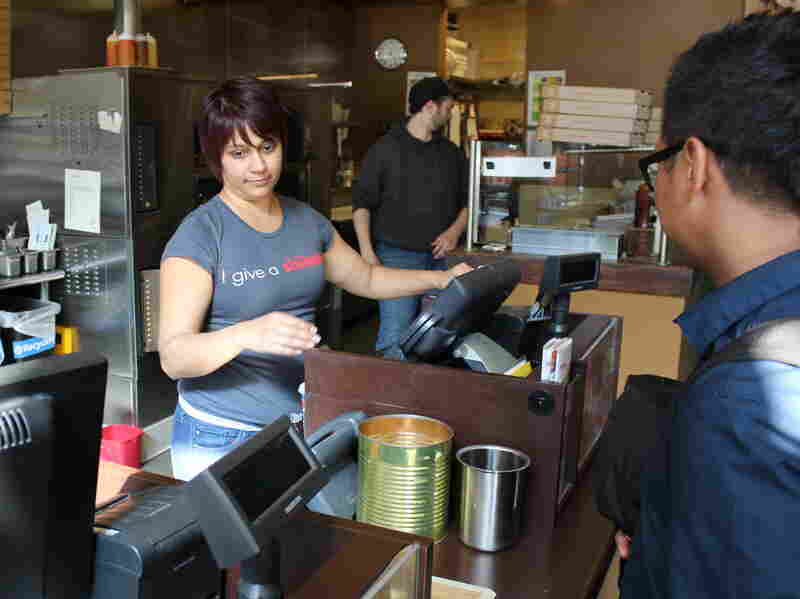 Ritu Shah Burnham owns a zpizza franchise in Seattle. She says she is closing her business because of the new minimum wage law, which mandates that she raise wages to $15 an hour by January 2017. Deborah Wang/KUOW hide caption 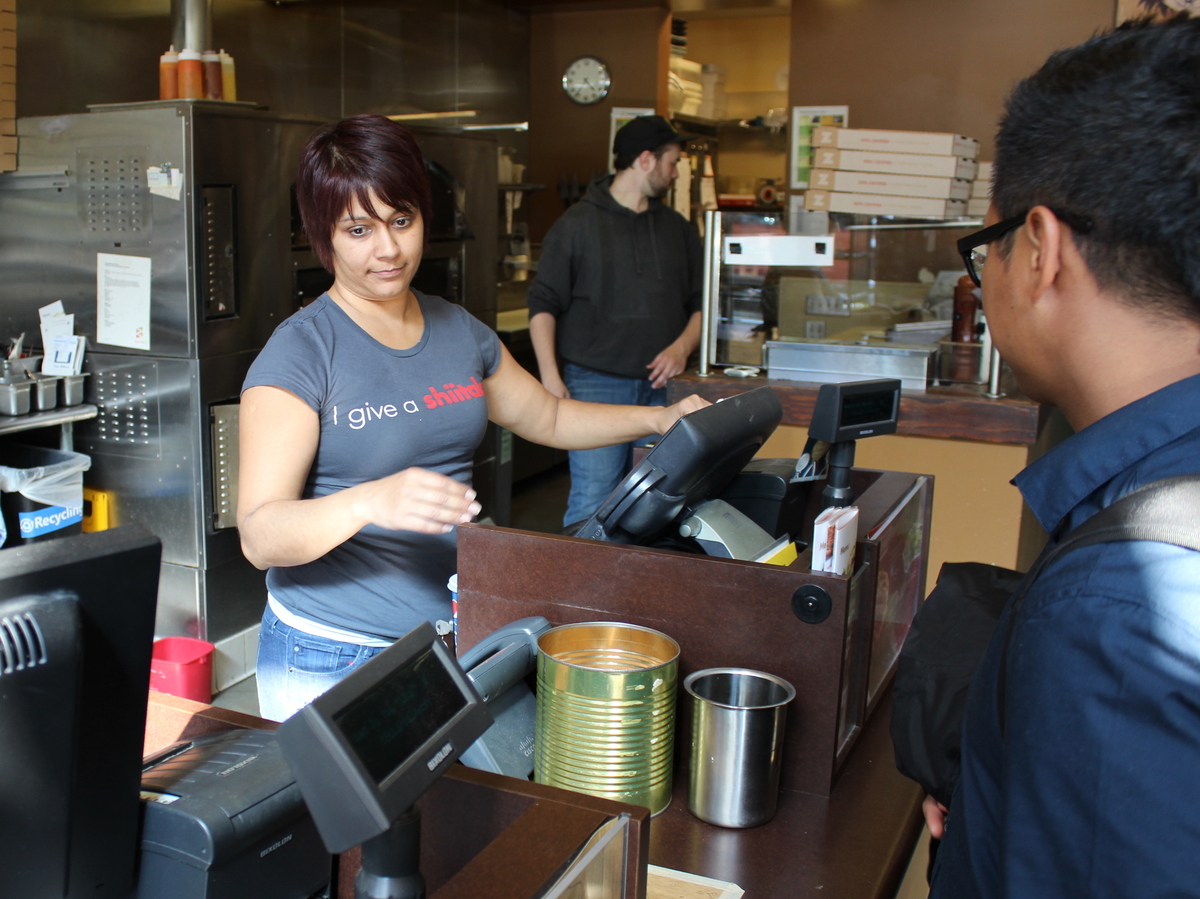 Ritu Shah Burnham owns a zpizza franchise in Seattle. She says she is closing her business because of the new minimum wage law, which mandates that she raise wages to $15 an hour by January 2017.

"If you have to pay $15 an hour in 20 months, and that is the largest part of your expenses, it's a little difficult to do a business plan that makes that work," Burnham says. "I tried. Before I made my decision I tried, and I didn't see it happening."

Burnham says she didn't want to go back to working 60 or 80 hours weeks, as she did when she first opened the restaurant, just to make ends meet. So she is shutting down her business at the end of the summer.

It is conceivable that more restaurant owners will follow in Burnham's footsteps. Even Seattle's best-known chef, Tom Douglas, says he may have to close some of his 15 restaurants.

"I really don't know what your saturation point is for what you're willing to pay for chicken," he says. "That's why I say I don't know. We are going to have to wait and see. I don't know if it is worth it for you to come to our restaurants when chicken is $30 a portion compared with when it was $20 a portion."

But Douglas says if higher prices force diners to cut back on eating out, that's OK. He'd rather have people make a living wage instead of selling more chicken.