Accessibility links
GIs Helped Bring Freedom To Europe, And A Taste For Oregano To America : The Salt Now ubiquitous, oregano was a rarity in U.S. cuisine before World War II. But the GIs who encountered it in Sicily fell for the herb, especially in pizza, fueling a boom in Italian-American cuisine.

GIs Helped Bring Freedom To Europe, And A Taste For Oregano To America

GIs Helped Bring Freedom To Europe, And A Taste For Oregano To America 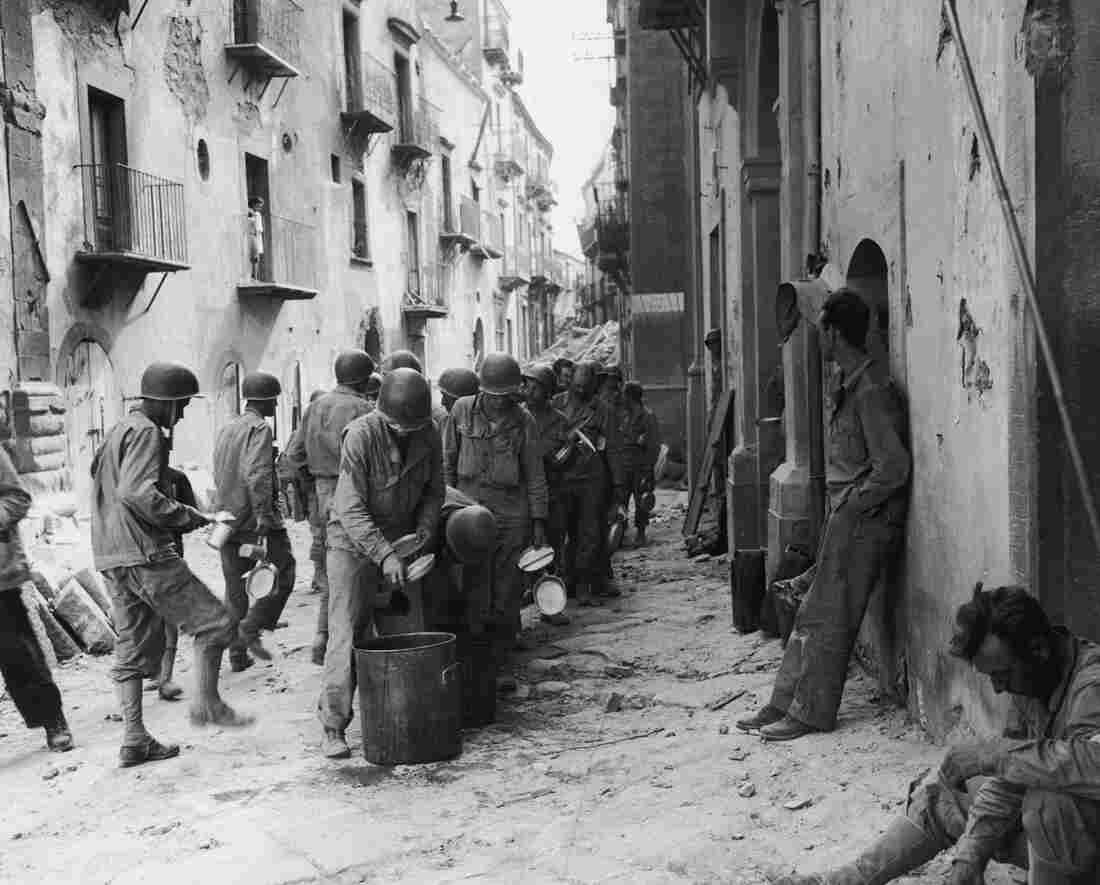 American GIs line up in the street in Troina, Sicily, utensils and dishes in hand, as they wait for a meal from a large pot, July 1943. Oregano grows abundantly in Southern Italy, where many GIs encountered the herb for the first time, and fell in love. Many brought the craving back home with them after the war. U.S. Army/Getty Images hide caption 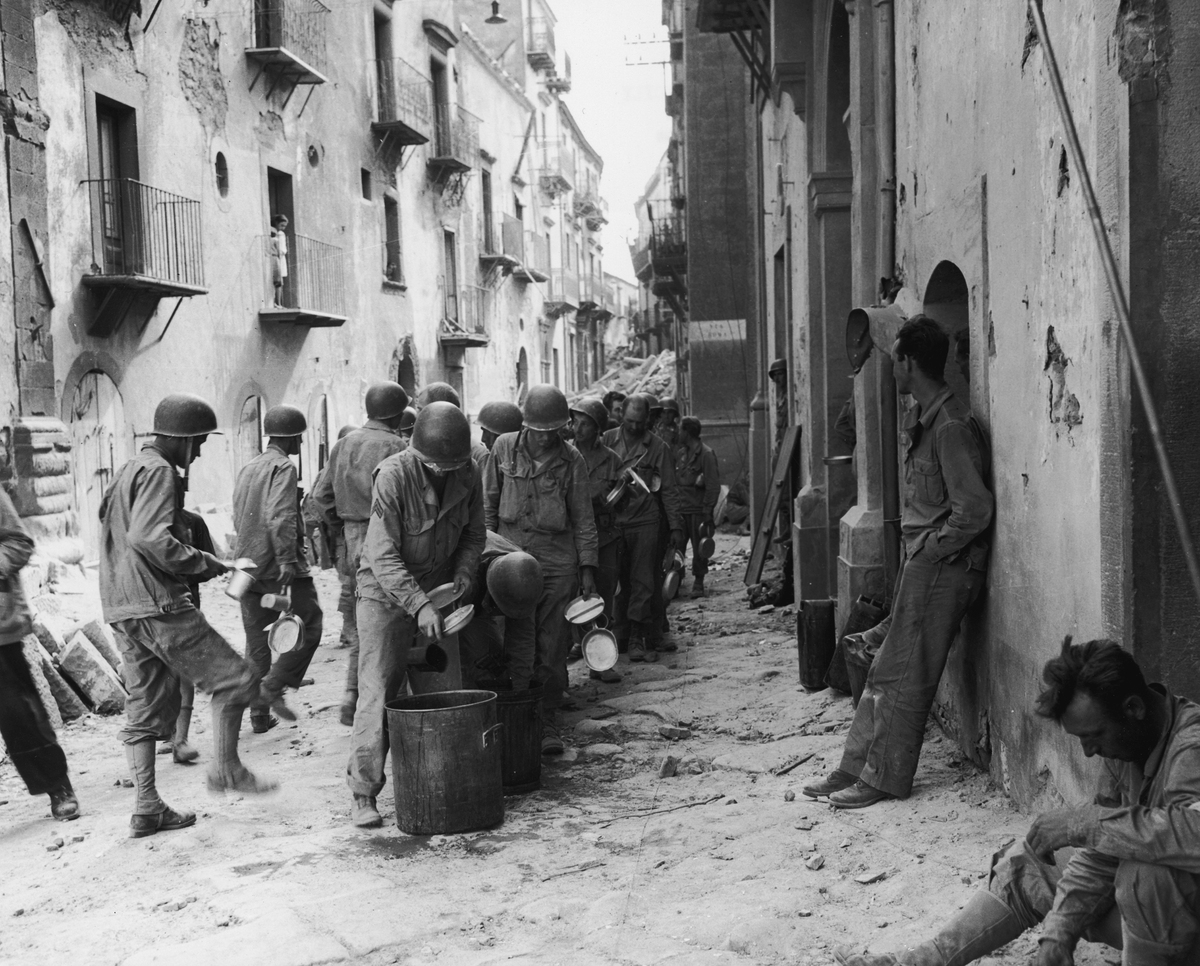 American GIs line up in the street in Troina, Sicily, utensils and dishes in hand, as they wait for a meal from a large pot, July 1943. Oregano grows abundantly in Southern Italy, where many GIs encountered the herb for the first time, and fell in love. Many brought the craving back home with them after the war.

This week marks the 70th anniversary of V-E Day, the great Allied victory over Hitler's forces in Europe during World War II.

What you may not realize is that the war helped forever change the American palate, as returning GIs brought home a craving for a pungent, fragrant herb they had encountered overseas: oregano.

It's hard to believe that an herb now so ubiquitous was practically unheard of in American cooking before the war. For instance, in How to Cook a Wolf, M.F.K. Fisher's legendary 1942 cookbook on preparing simple meals during a time of privation, oregano gets just one mention: a teaspoon for the Minestrone soup recipe — as an "optional but nice" ingredient.

Little knowing how Italian food would take off in the next decades, Fisher patriotically offered a "green garden soup" as an alternative to minestrone, because, as she noted, "I know several earnest, thoughtful women who would rather see their children peaked than brew something with the foreign name minestrone, because in this year of 1942, the United States is at war with Italy."

But there's no escaping oregano today. It is found in breadcrumbs and salad vinaigrettes; garlic bread is speckled with it, meatballs are loaded with it, and billions of slices of pizzas are smothered with it.

Americans consume more than 14 million pounds every year. Of all the herbs the U.S. imports, oregano is No. 1 in terms of both quantity and value. It's safe to say that oregano, whose name is derived from the Greek words oros (mountain) and ganos (joy), can rightfully stake its claim to the title of America's herb of choice.

The first time a large and diverse group of Americans came into contact with oregano was during the grueling Italian campaign fought from 1943 to 1945. On the stormy morning of July 10, 1943, a massive influx of 150,000 British and American troops made air and sea landings on the island of Sicily. The plan was to invade Southern Italy, which Winston Churchill called "the soft underbelly of Europe." But the region also had other belly enticements in store for the invading soldiers.

Southern Italy is the region where oregano grows abundantly. It perfumes both the air and the food, where it is used liberally, unlike in Northern Italy, where it is hardly used at all. It was here that many soldiers first encountered oregano and fell in love with the way its sharp, woodsy flavors transformed their pizza, another rustic food many of them were tasting for the first time.

As it happened, one of the food suppliers to the U.S. Army was the Italian immigrant Hector Boiardi, who later Americanized his named to Chef Boyardee. During the war, thousands of GIs ate his tins of spaghetti in tomato sauce. When they got back home, they began to look for the same kind of food, but this time they wanted it flavored with their new favorite "pizza herb."

"It's my understanding that the American soldiers brought [oregano] back from Italy with them after World War II," Italian-American celebrity chef Lidia Bastianich told me in an email.

She adds, "When I arrived in America as a young girl, over a decade after the war, oregano was definitely in most of the Italian-American restaurants, pizzerias and family homes that I visited. Of all the aromatic herbs, the only one I like and use dried is oregano. Its aroma and flavor seems to intensify when dry, but still bring a freshness to the palate."

Between 1948 and 1956, sales of oregano in the U.S. rose by an astounding 5,200 percent, says food writer and historian John F. Mariani in his 2011 book, How Italian Food Conquered the World. From an herb the Department of Commerce didn't even bother to list separately in its import records, oregano became one whose imports zoomed to 1.5 million pounds a year by the 1960s. Even Peg Bracken's delightful 1960 I Hate to Cook Book, which takes a perverse pride in shunning exotic ingredients and sticking to stuff available in the average kitchen cupboard, lists oregano as a staple, along with curry powder and chili powder.

As food writer Mariani rightly points out, the use of oregano in the U.S. predated the war — it was a central part of the food of New York's immigrant Italians, who were predominantly from Southern Italy. New York was the nursery of Italian food in America. By the time the GIs went marching off to fight Hitler and Mussolini, Italians made up close to a fifth of the city's population.

But Italian food was still a distinctly niche affair, Mariani tells me. While some Americans around the immigrant hubs of New York, New Orleans and California were adventurous enough to sample this new fare, the larger populations in the Midwest and South remained ignorant of pizza, as did many city people. So much so that in a 1939 column, the New York Herald Tribune's food writer felt it necessary to explain what a pizza pie was and that it was pronounced "peet-za."

The war changed everything.

By 1951, the jazz saxophonist Art Pepper had composed a sharp, sibilant number called "Art's Oregano." And in 1953, Dean Martin's liquid voice singing the nonsensical but catchy lines, "When the moon hits your eye like a bigga pizza pie / That's amore!" soared to No. 2 on the Billboard charts. Ever since, the amore between pizza, oregano and America has steadily gotten bigga.

Indeed, the biggest boost oregano got was when pizza took off in the U.S. Once again, there was a war connection. The pizza boom was triggered by a GI named Ira Nevin, who returned from Italy to New Rochelle, N.Y., and got his family, which was in the oven-building business, to construct a gas-fired, ceramic-deck pizza oven. Cleaner and more efficient than the traditional brick-and-coal ovens, these ceramic kilns were also easy to mass-produce, leading to the industrialization of pizza.

"Post-World War II, there was a boom in Italian food," Mariani says.

Lots of factors contributed: There was a fresh wave of Italian immigrants fleeing the devastation of their homeland. Companies like Ronzoni, started by an immigrant pasta-maker in San Francisco, expanded greatly in the '50s and '60s, raising the profile of Italian food. Chef Boyardee's canned spaghetti and pizza were among the first foods to be advertised on TV.

Magazines like Life began to carry glamorous pictures of Italian foods and recipes. And when Pan Am introduced a direct New York-Rome flight in 1958, Mariani says, floods of American tourists began to visit Italy in search of its delicious food and la dolce vita. Meanwhile, stateside, a number of new Italian restaurants opened for business.

Oregano was a star ingredient in this cuisine, especially in the dish that, along with pizza, would soon become the face of Italian-American cooking: pasta sauce and meatballs. Garlic-rich, oregano-infused marinara sauce was an inescapable presence in every Italian home. As celebrity chef Anthony Bourdain recalled on Tumblr, he and his buddies used to joke that marinara "was pumped through a central 'Sauce Main,' from one Italian restaurant and one pizzeria to another, throughout New York and Northern New Jersey."

The question of whether to add oregano to marinara sauce and meatballs divides Italian-Americans from their brethren in the Old Country. Even in the Italian-American community, there are those who think it's an abomination and others who feel it's OK to use it. In The Italian American Cookbook, Mariani himself prescribes it. But he hastens to clarify that he only put it in because it was an Italian-American cookbook, whereas true marinara is only flavored with garlic and some freshly shredded basil.

New York Times food writer Kim Severson was so puzzled by the fact that while her Italian-immigrant grandmother never ever used oregano in her sauce, her mother did, she went to the Old Country to do some sleuthing. She ended up facing tough questioning herself. In her book Spoon Fed: How Eight Cooks Saved My Life, she describes how, at a little roadside restaurant in Abruzzo, an old woman grabbed her arm and gave it a hard shake. "Why didn't I speak any Italian?" Severson says the woman demanded. "And even worse, why did I think oregano had any place in tomato sauce?"

Online gourmets can be as puritanical as the old woman. But these purists are usually drowned out by the do-what-suits-you-best brigade. When one person asked plaintively on Chowhound, "Is fresh oregano in a tomato sauce a crime? Is it really a sin? I like oregano!" there was a gush of sympathetic replies. "Use oregano if you like it," said one defiant respondent. "This is why I live in San Francisco — I do what I like and as long as I don't vote Republican, no one harasses me."

As the country remembers V-E Day, what better time to toast an herb that cast its aromatic spell on thousands of American GIs seven decades ago. Yes, they won the war. But in the case of oregano, they came, they ate, and were conquered.

Nina Martyris is a writer based in Knoxville, Tenn.