Accessibility links
Tea Tuesdays: Matcha-maker, Matcha-maker, Make Me Some Tea : The Salt Matcha green tea is taking off in America, but the Japanese have been drinking it for eight centuries. What happens when commercialism meets tradition? 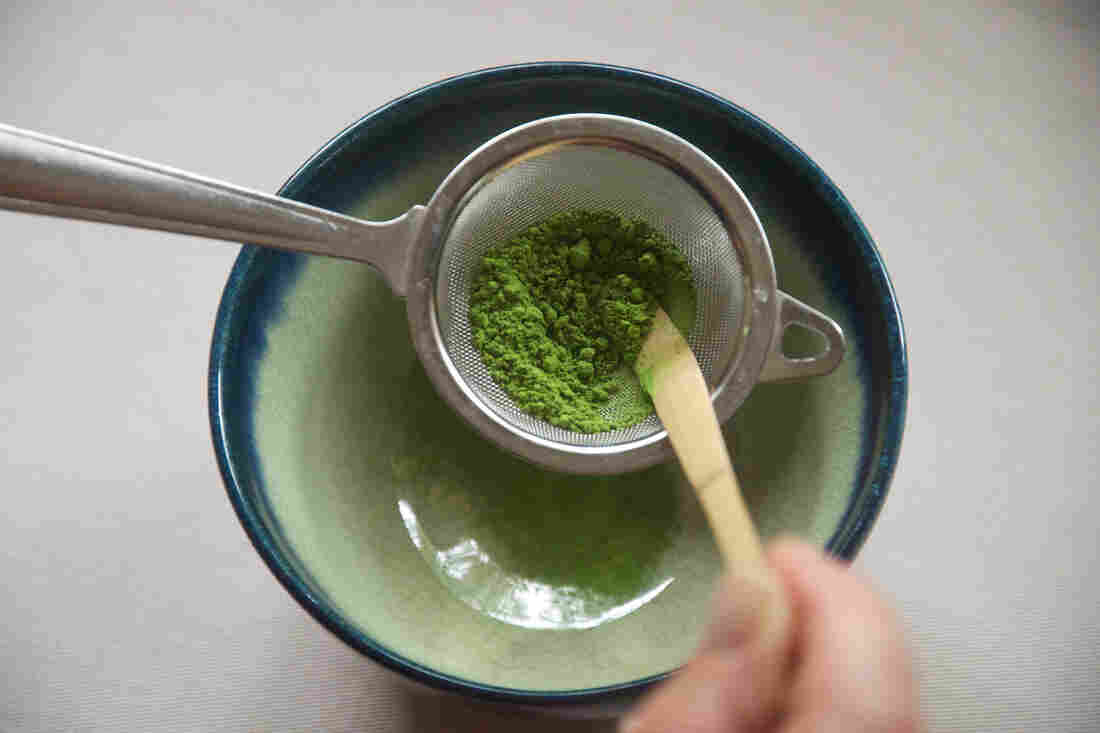 Matcha tea powder comes in two grades: ingredient and drinking. The drinking grade comes from the leaves at the top of the tea plant. Courtesy of Alissa White hide caption 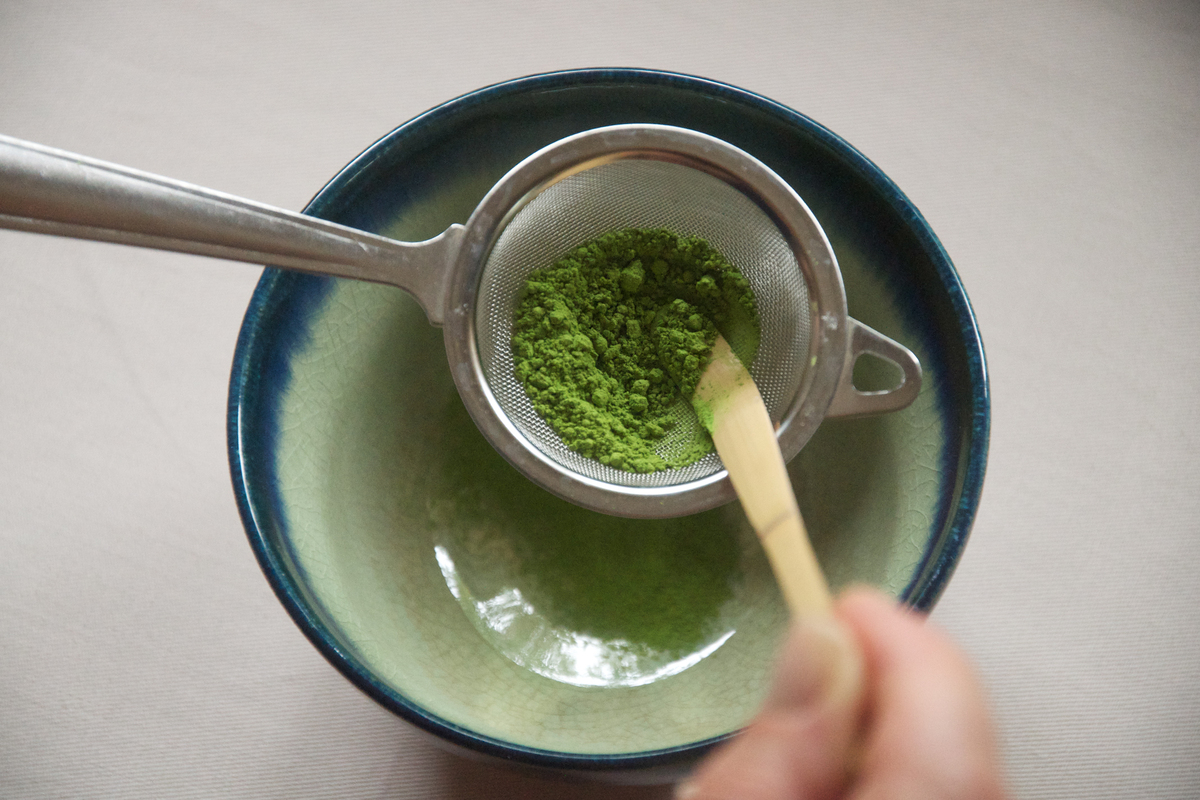 Matcha tea powder comes in two grades: ingredient and drinking. The drinking grade comes from the leaves at the top of the tea plant.

Just like flared jeans, Teenage Mutant Ninja Turtles and thighs without a gap, matcha tea powder is in fashion in America.

You can grab a matcha latte at Starbucks. Whole Foods stocks the green tea powder on its shelves. Or now that warm weather is here, maybe you'll order a Matcha Green Tea Blast smoothie from Jamba Juice. 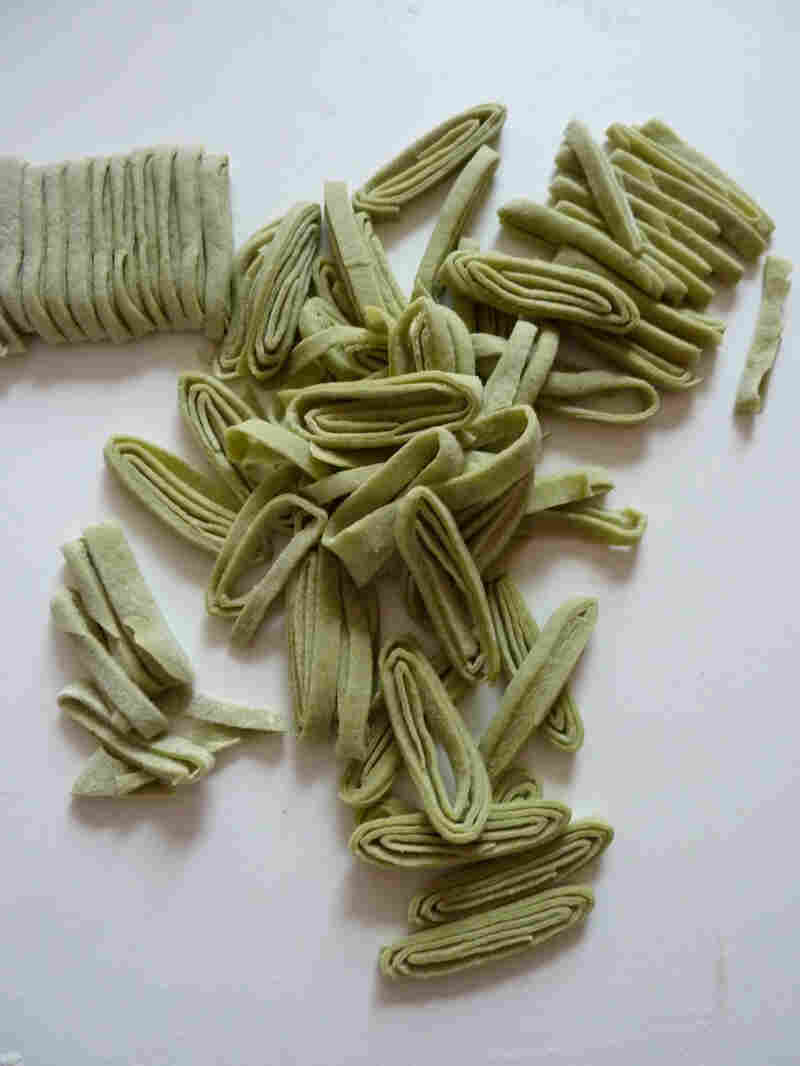 Handmade Japanese matcha noodles are one example of the variety of foods that can be infused with green tea. katteballetje/Flickr hide caption

Lest you think you're on the cutting edge of health and hipness, the Japanese Buddhist monk Eisai was way ahead of you. In 1191, Eisai brought tea seeds back to Japan from China, where he had studied to become a Zen teacher. The tea plants thrived in the hills around Kyoto.

Zen Buddhists in China had developed a method of grinding tea leaves, then whisking the tea powder and hot water in a bowl to form a frothy drink. Eisai brought this knowledge back to Japan, where he founded Japan's first Zen temple.

Esai wrote a book on tea, Kissa Yojoki, or "How to Stay Healthy by Drinking Tea," which played a major role in spreading tea culture in Japan. Its first sentence: "Tea is the ultimate mental and medical remedy and has the ability to make one's life more full and complete."

As Zen Buddhism began to spread in 13th-century Japan, matcha tea seemed to help the monks stay calm, yet focused and awake, during long meditation sessions. (Centuries later, scientific studies revealed that the combination of caffeine and the amino acid L-theanine in tea may improve focus and mood.) By the 14th century, the matcha habit had spread to all classes of Japanese society.

But if matcha has been consumed for hundreds of years, why the sudden boom in the mainstream American market?

Alissa White, who founded her company Matcha Source, first became interested in matcha about 10 years ago. "It was deeply rooted in the language of wellness," she says. "I think that was the beginning of the boom. It just caught on one cup at a time."

White isn't surprised by matcha's spiking popularity. Its unique powdered form makes it easy to use in many ways: straight up, in shakes, yogurt and lattes, and in muffins, cookies and ice cream. Matcha powder has been an ingredient in Japanese desserts for many years.

"For people who may not be tea drinkers," White says, "there's another way for them to get the nutritional benefits and energetic lift."

All tea comes from one plant, Camellia Sinesis. The differences between types lie in the processing of the leaves, and green tea is minimally processed. But because matcha is ground, the entire leaf is consumed in powdered form. This makes matcha tea a highly concentrated version of regular green tea, and only a teaspoon or less of powder is needed to make a bowl.

Green tea has been linked to lots of potential health benefits, including improved heart health, weight maintenance and a reduced risk of cancer. So does that mean that one cup of matcha tea will provide you with the nutritious punch of multiple cups of regular green tea?

Karen Collins, nutrition adviser to the American Institute of Cancer Research in Washington, D.C., says the actual health benefits of drinking matcha tea are not clear-cut. 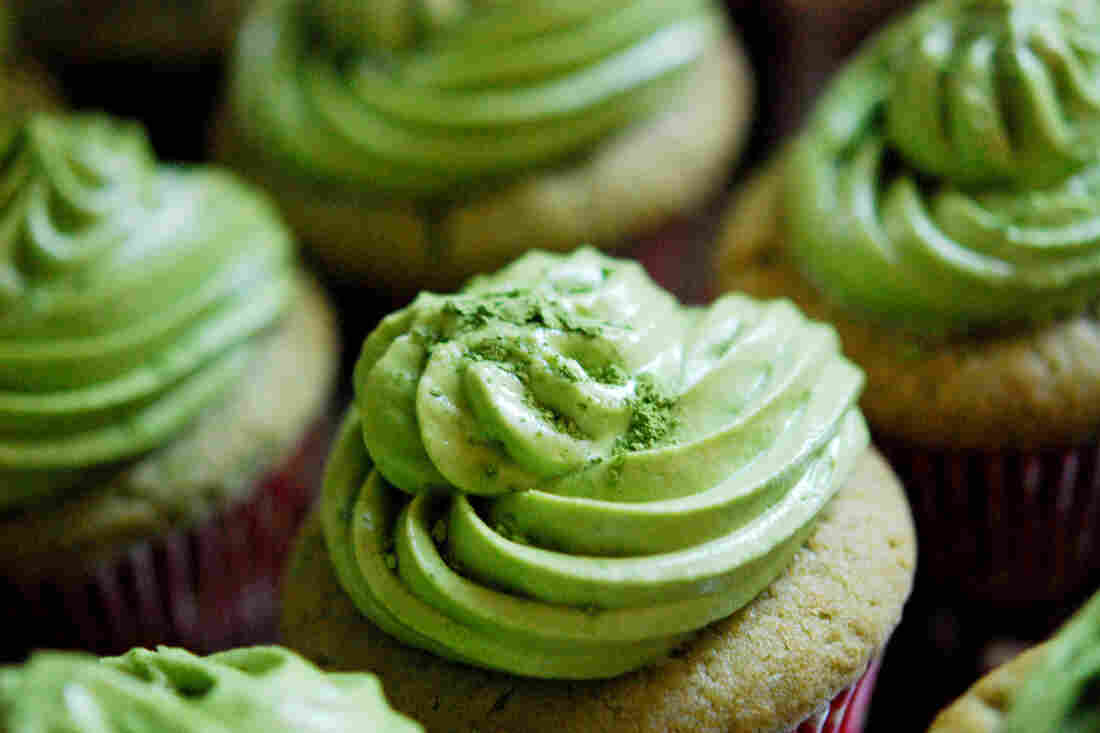 Ingredient grade matcha can be used in many treats, such as cupcakes, muffins or sweetbreads. Jennifer Yin/Flickr hide caption 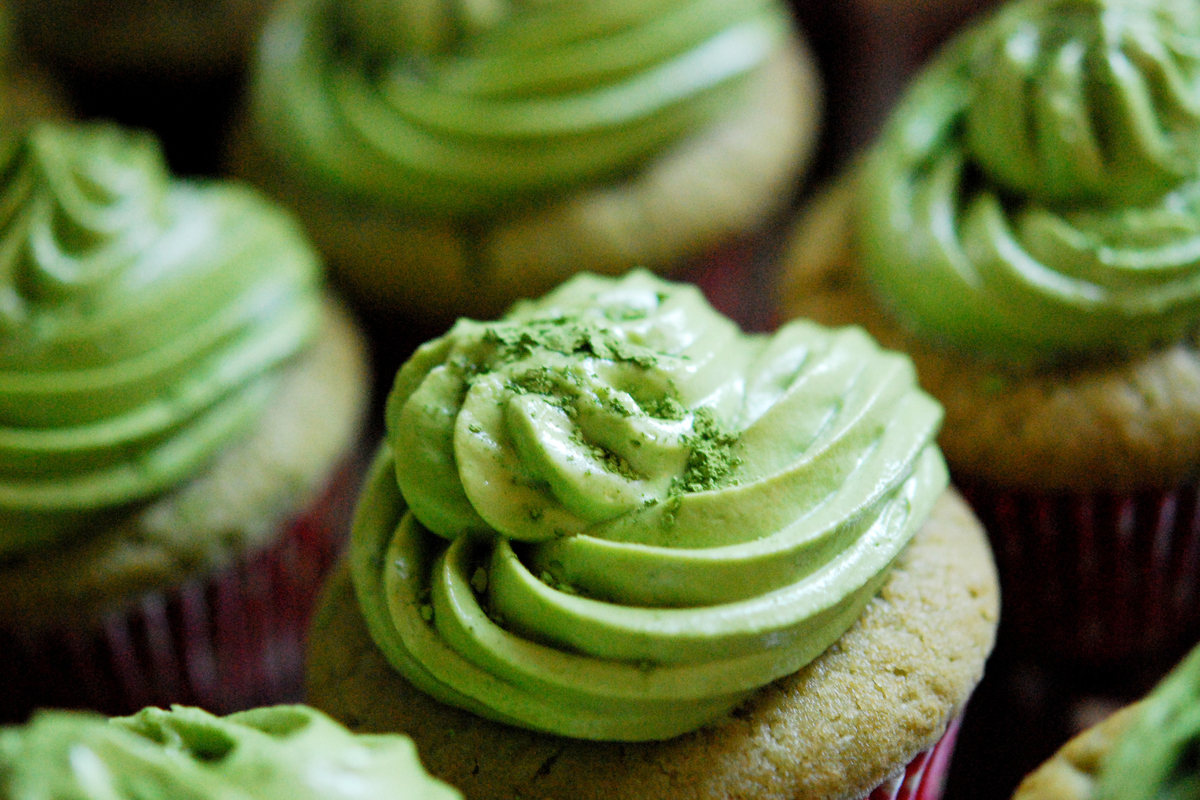 Ingredient grade matcha can be used in many treats, such as cupcakes, muffins or sweetbreads.

"Matcha is a more concentrated source of green tea, and we know that the laboratory studies provide some evidence there in reducing the risk of cancer. But the evidence is far from clear, and you need to put it in the context of your overall healthy eating pattern," Collins says.

"Tea is a great beverage choice," she adds. "The links in terms of [reducing the risk of] heart disease and cancer are there. and if you like matcha, that's great." But don't think it's a magical health elixir.

Matcha is produced in very small quantities in Japan and exported in even smaller quantities. The process is time-consuming and painstaking.

White of the company Matcha Source works with a century-old tea farm in Japan.

"Matcha tea is shade-covered at the end of harvest. Shade-covering really contributes to the unique flavor," she says.

It also makes matcha richer than other green teas in chlorophyll, which gives the tea its bright green color and its smooth, grassy, vegetal taste.

The leaves are mostly hand-picked, then steamed, air-dried and de-stemmed. They are stored in that dry state for up to a year until the next harvest. Then they are stone-ground.

The grinding wheels are hand-carved and rotate in opposite directions. It takes about an hour to make 1.5 ounces of matcha powder.

"It's really a dying art, the hand-carving of these stones," White says. "It's incredibly beautiful to see how meticulous the Japanese are. They have found a good balance right now between using automation and technology, but still maintaining the craft and the art."

Demand from America has motivated Japanese tea farms to produce higher volumes of matcha powder, but "they still have tremendous respect for tradition and craft," White says.

But has all of the health-hype and commercialism clouded the spiritual culture of matcha tea?

Keiko Nakada, an instructor in the Japanese tradition known as Urasenke Chado, or "the way of tea," doesn't think so. 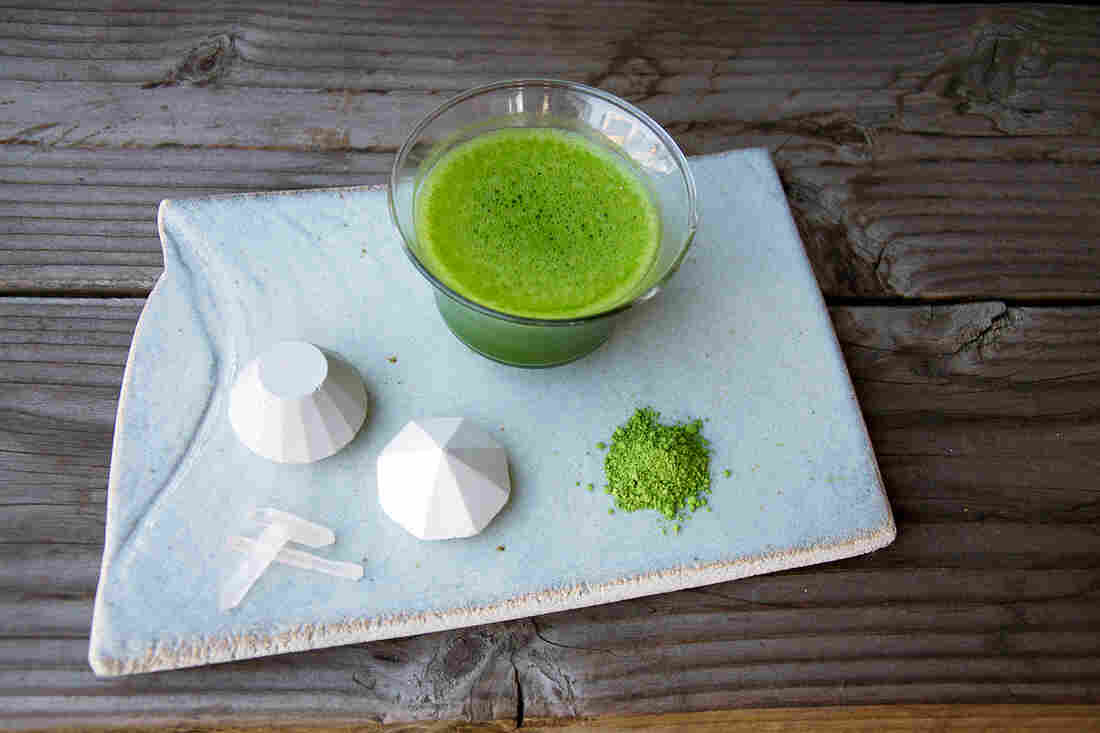 Ground, sifted and whisked, matcha tea has been used in Japanese tea ceremonies for around 800 years. Courtesy of Alissa White hide caption 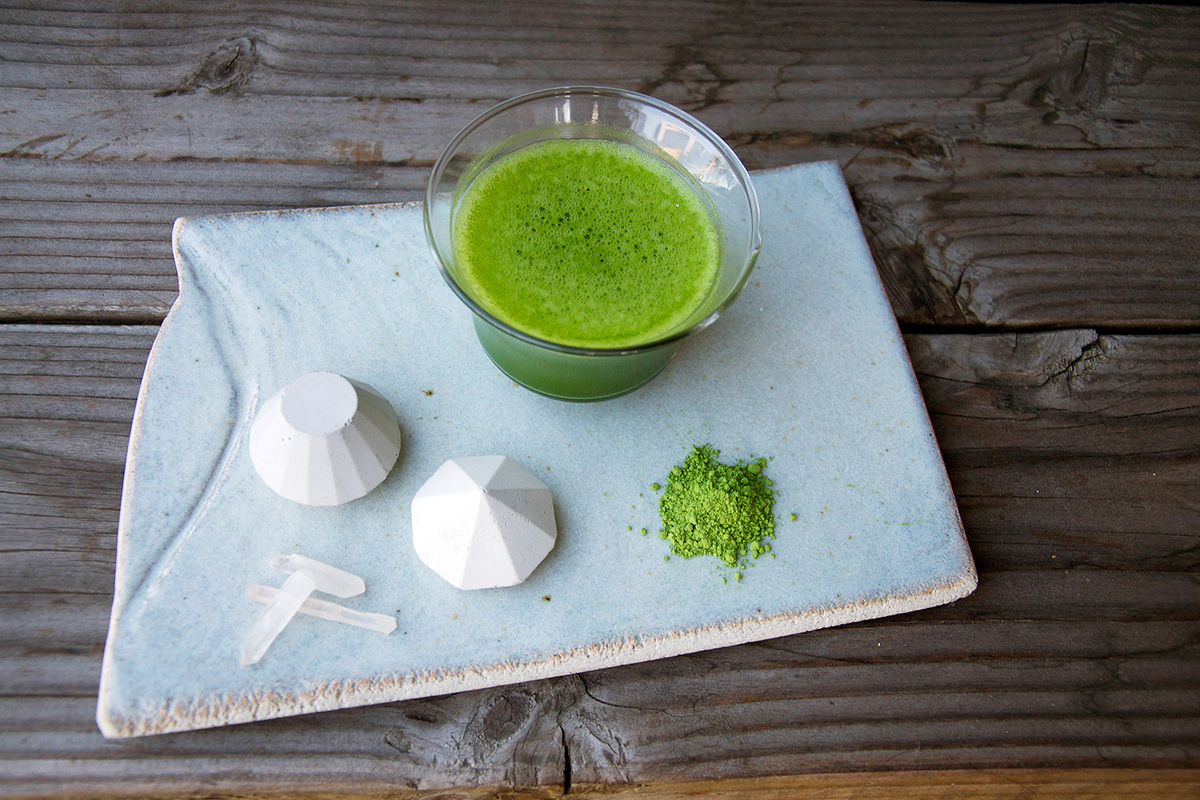 Ground, sifted and whisked, matcha tea has been used in Japanese tea ceremonies for around 800 years.

"I think it is great that matcha can be an ambassador of sorts for Japanese culture," Nakada says. "To me, it is a bridge to understanding some of the best of what the Japanese culture has to offer. We, as students of tea, are constantly polishing ourselves in daily living through, for example, the four ideals of Chado: wa, kei, sei, jaku (harmony, respect, purity, tranquility.) This philosophy of honoring ourselves and others can go a long way to developing a more peaceful world."

And although Chado has its roots in Zen Buddhism, "it is not a religious pursuit, per se, but more of a time to slow down, reflect and perhaps enjoy the company of others," says Nakada.

And White, who says her matcha business is booming, says that "America is the frontier. We haven't even started drinking tea here yet."

Laurel Dalrymple is a writer based in Northern Virginia.