Accessibility links
USDA To Certify Non-GMO Foods With New Label : The Salt The government runs organic and antibiotic-free labeling programs, but has stayed out of the non-GMO labeling fray. That is, until a food company asked the USDA for help, and the agency obliged. 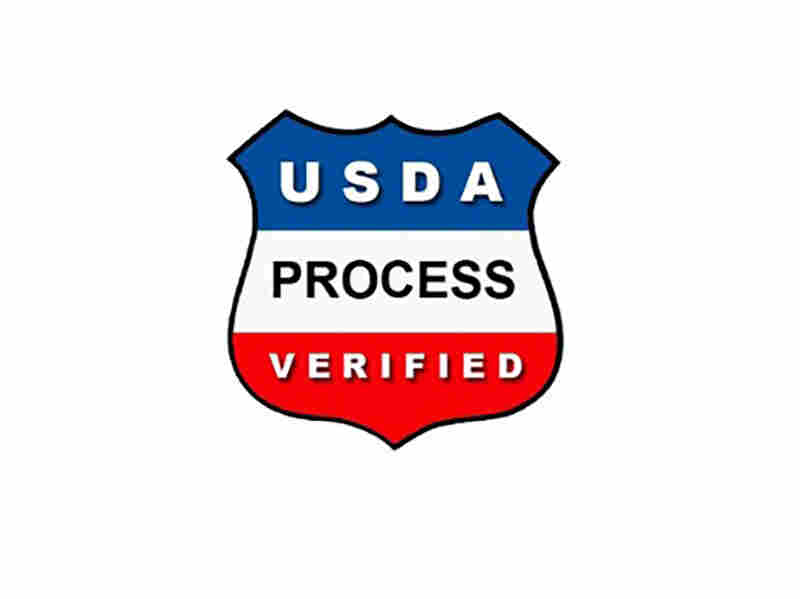 The U.S. Department of Agriculture says it will verify companies' claims of using non-GMO ingredients through its Process Verified Program. USDA/AMS hide caption

If you want to know if the beef you're buying is grassfed, there's a U.S. Department of Agriculture label for that. The agency is also behind the nation's biggest certified organic label, and an antibiotic-free one, too.

But how do you know whether a product is made with genetically modified organisms? It's not always easy to tell.

For companies that want to certify their food as being free of these ingredients, there's the Non-GMO Project Verified seal administered by the independent Non-GMO Project. Some companies, like General Mills, just put "Not made with genetically modified ingredients" on the box of Cheerios.

But, increasingly, there's been a push for the federal government to step into GMO labeling.

Now, Agriculture Secretary Tom Vilsack has announced in a letter to his staff (dated May 1) that the agency's Agricultural Marketing Service is developing a verification program for food products containing genetically modified ingredients.

"Recently, a leading global company asked AMS to help verify that the corn and soybeans it uses in its products are not genetically engineered so that the company could label the products as such," Vilsack wrote in the letter. "And AMS worked with the company to develop testing and verification processes to verify the non-GE claim." (The company has not been named, but is expected to make an announcement soon.)

How Your Food Gets The 'Non-GMO' Label

And, Vilsack added, "other companies are already lining up to take advantage of this service."

The announcement comes at a time when a lot of consumer and environmental groups have been calling for mandatory labeling of GMOs. But since the government says GMO ingredients on the market are safe, this will not be a mandatory label.

The Grocery Manufacturers Association has asked the Food and Drug Administration to outline labeling standards companies can use voluntarily, though the industry group has resisted the idea of mandatory labeling.

But as companies increasingly try to use GMO-free as a marketing advantage, it's clear from the letter that some want the USDA's help. As with the agency's other, widely trusted certification programs, this one will be aimed at creating more transparency for consumers and producers.

Why We Can't Take Chipotle's GMO Announcement All That Seriously

So, here's how the system will work: Companies that want to use the USDA's Non-GMO Label will pay to participate in the Process Verified Program.

Companies will submit documents such as desk and onsite audits. And, AMS spokesman Sam Jones-Ellard says, the USDA will also send auditors on site to verify that the foods are not being produced with any GMO materials.

As this issue gains traction with consumers, lots of Americans are wary of GMO foods. And more are just flat out confused about what they are, where they are in the food supply and whether they're dangerous. There is no evidence, by the way, that eating genetically-modified foods poses a threat to health.

But, out of precaution, it seems, more consumers are avoiding them. And retailers and restaurants are responding to customers' evolving expectations.

Just last month, Chipotle said it would remove most ingredients made with GMOs from its menu. And two years ago, Whole Foods told its suppliers that by 2018 all of its products in its U.S. and Canadian stores must indicate if they contain genetically modified organisms.