Accessibility links
Tea Tuesdays: Cold Weather, Gogol And The Rise Of The Russian Samovar : The Salt The giant, metal, hot-water urns are at the center of Russian tea culture — and national identity. How that came to be may have as much to do with Russian literature as common usage. 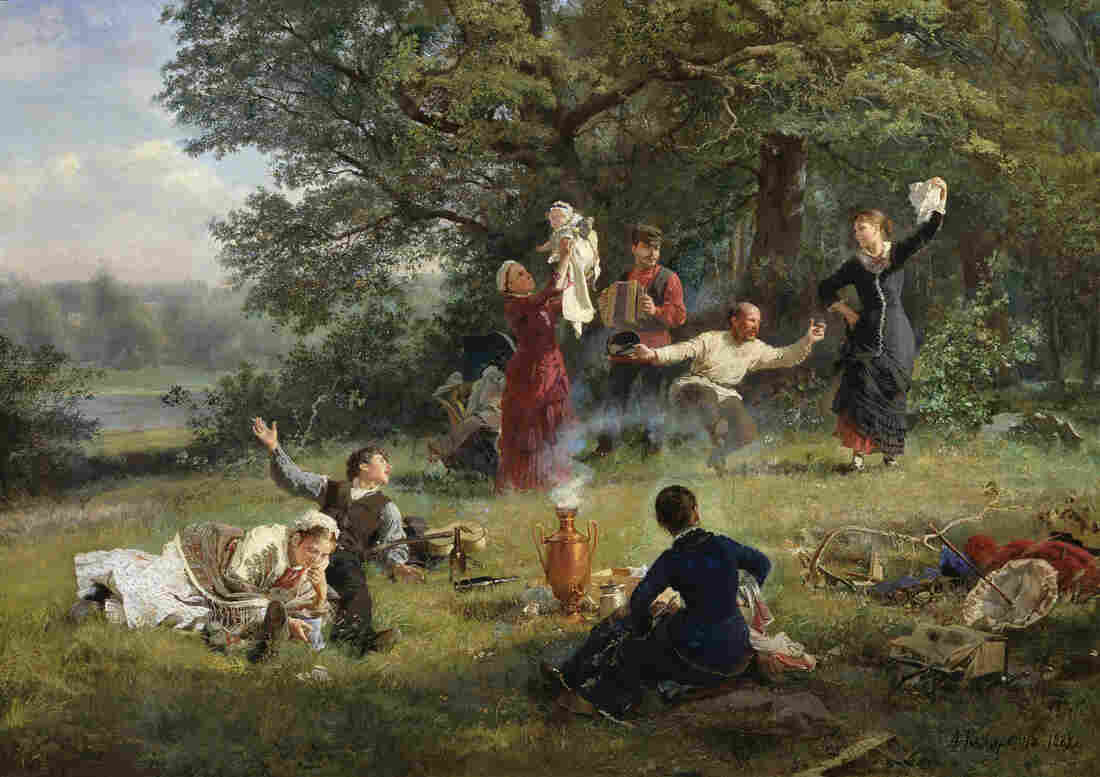 The Sunday (1884), by Russian painter Alexei Korzukhin, depicts what appears to be a jovial family out with a samovar at its center. The giant hot-water urns became ingrained in Russian identity in the 1800s. Alexey Korzukhin/via Wikimedia hide caption 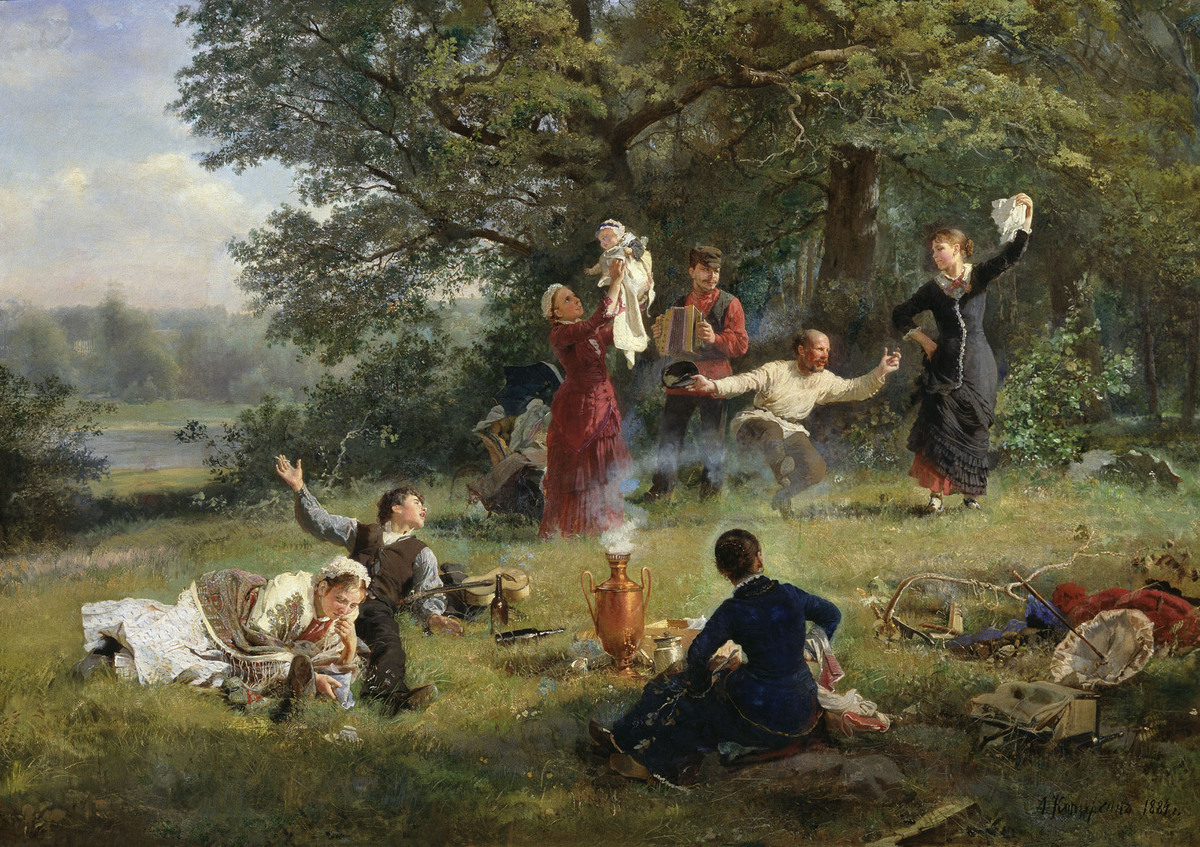 The Sunday (1884), by Russian painter Alexei Korzukhin, depicts what appears to be a jovial family out with a samovar at its center. The giant hot-water urns became ingrained in Russian identity in the 1800s.

There are two drinks most people associate with Russia — vodka and tea, prepared in a giant hot-water urn known as a samovar.

Yet while vodka may have actually originated in Russia (Poland is another contender), tea is a thoroughly foreign product.

Most historians believe the Chinese first brought tea to Russia sometime in the 1600s. As for the samovar? "The origins are shrouded in mystery," says Maria Zavilova, curator at the Museum of Russian Art in Minnesota. 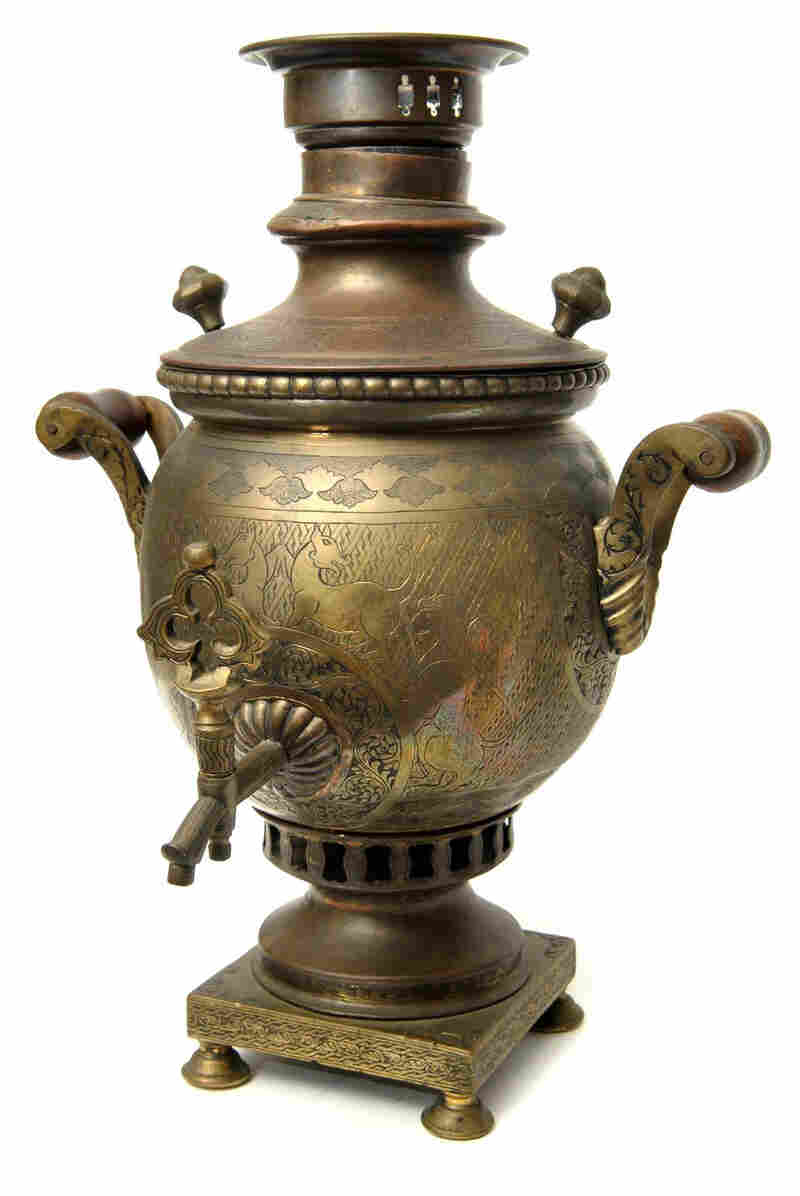 A late 19th-century samovar made in Tula, Russia, a metalworking town south of Moscow. The very first samovar factory opened in Tula in 1778. As demand for samovars grew, the town became almost synonymous with the production of the giant hot-water urns. Sheldon Luskin Collection/The Museum of Russian Art, Minneapolis hide caption

The samovar is undoubtedly at the center of Russia's tea culture. But it is also used in Turkey, Iran and Central Asia. Regardless, it was in Russia, a sprawling country whose northernmost boundaries reach into the Arctic Circle, that the samovar became entwined with national identity.

A samovar is essentially a glorified self-heating kettle. Its base features an area where you can light a fire; an internal chimney vents the smoke into the air while heating the water around it. A small teapot can be placed at the very top of the samovar to keep steeped tea warm. This made the samovar very practical compared to Russian stoves that took a lot of firewood and time to heat up. "It was an economical way to heat water very fast," says Zavilova.

This may be one reason why the samovar took hold in Russia: For most people, it was simply the most cost-effective way to drink tea. The very first samovar factory opened in Tula, a metalworking town south of Moscow, in 1778. As the demand for samovars grew and even more factories opened, the town became almost synonymous with samovar production. "It had dozens and dozens of factories making samovars," says Zavilova. Even today, it's noted in sales brochures or museum descriptions if a samovar was made in Tula. 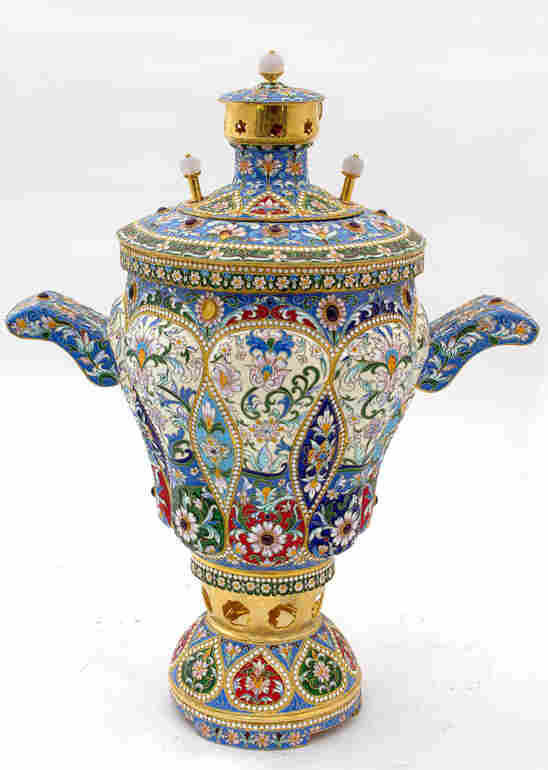 Today, tea drinking is thoroughly ingrained in Russian identity, at home and abroad (think of the famous Russian Tea Room in New York City). Yet tea itself didn't become affordable for all Russians until the late 1800s, writes historian Audra Jo Yoder in Making Tea Russian. In the early 19th century, "tea drinking as an everyday social ritual, if it existed at all, was confined to the highest echelons of Russian society," she writes. It's likely that many lower classes who had samovars weren't drinking tea but sbiten' — a hot drink made from herbs, sweetened with honey.

Yet samovars were primarily utilitarian — many are decorated simply with etchings on the metal. Even the samovars that famed jeweler Peter Carl Faberge crafted for the czars were left unpainted – though they were plenty opulent nonetheless: They were mostly constructed from lustrous silver and accented with intricate engravings on the legs, spout and top, their handles crafted from ivory. 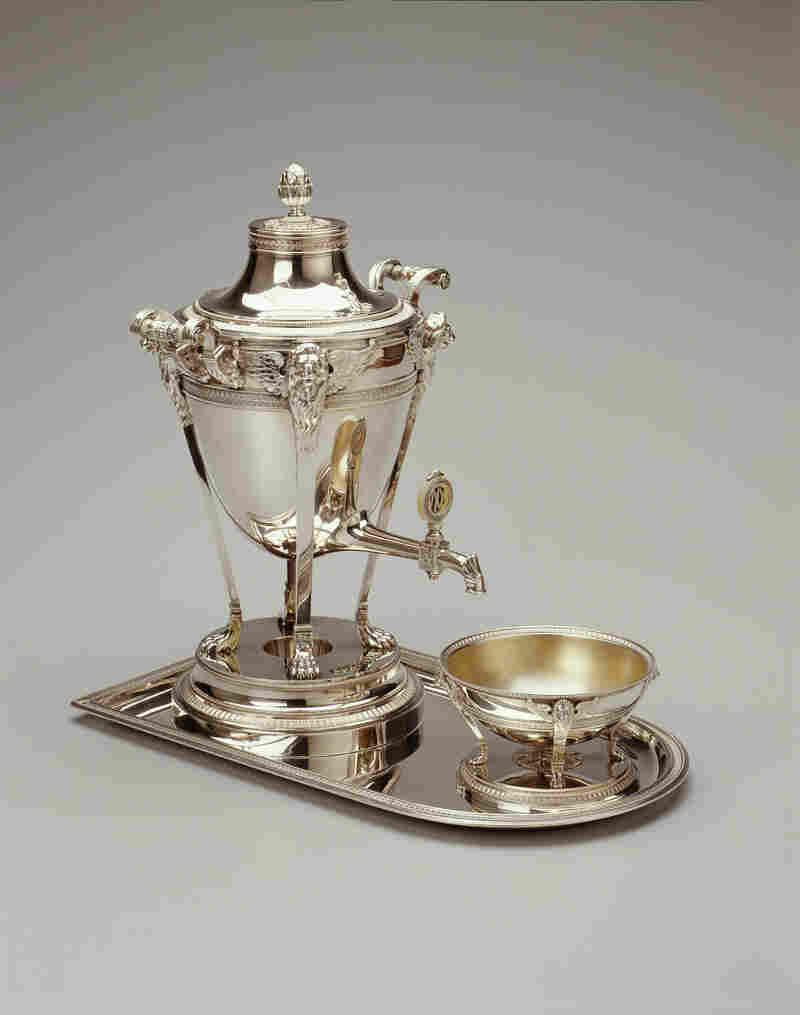 This samovar, made in Moscow in 1909, was part of a grand tea set crafted by the First Silver Artel, a firm that often, as in this case, supplied works to the Faberge firm for retail. The marks of both Faberge and the First Silver Artel appear on the samovar. Courtesy of Hillwood Estate, Museum and Gardens hide caption 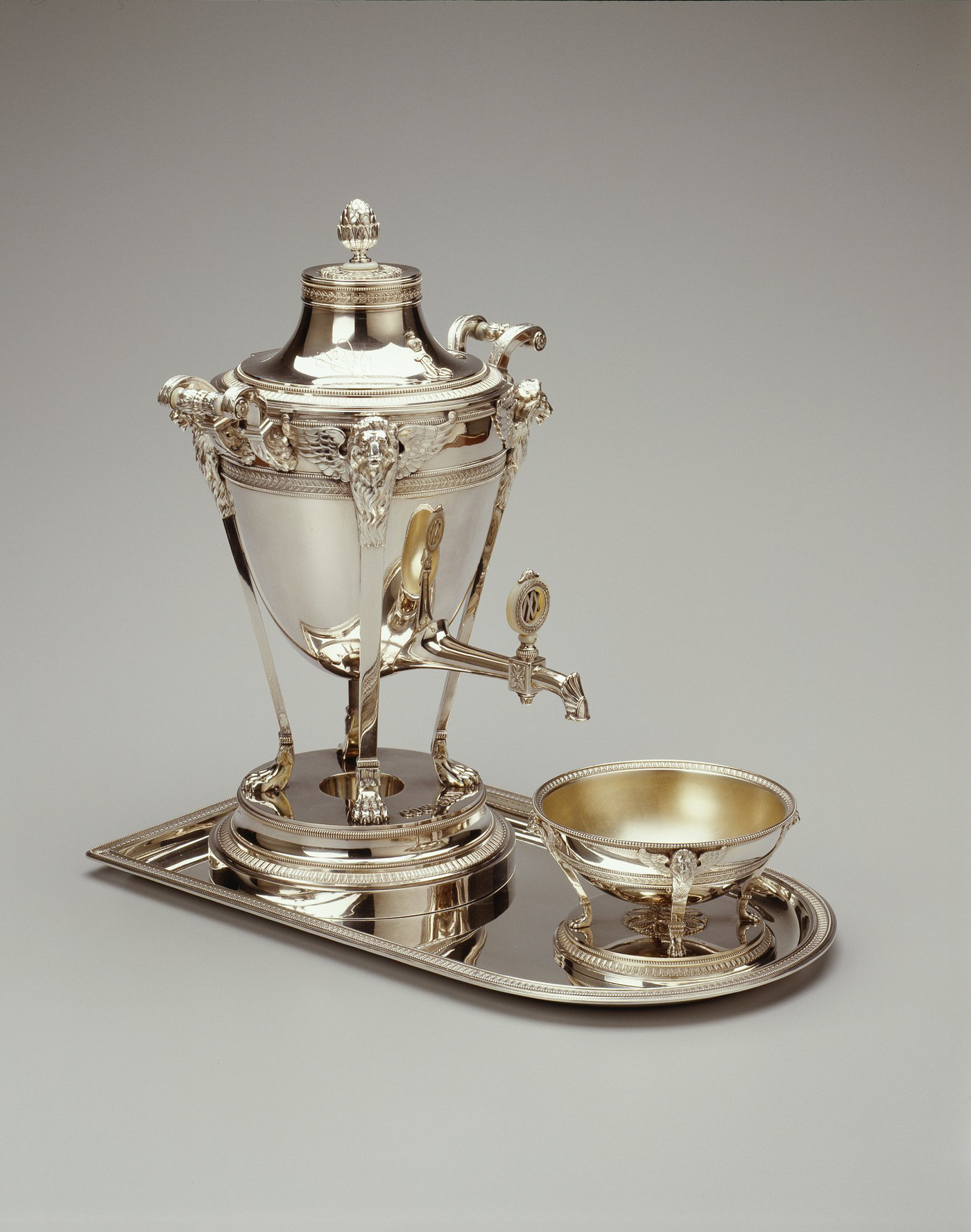 Regardless of the social class of its users, samovars helped alter the nature of social gatherings for all Russians, says Zavilova. Since the water inside a samovar had to be heated all at once, anyone who wanted to partake in a hot beverage had to gather around it at the same time. A samovar could often heat between one and two gallons of water – perfect for a large group to enjoy a leisurely chat while drinking tea.

In the 1800s Dostoyevsky, Pushkin, Tolstoy and other great Russian writers began using the samovar as a symbol of the nation's culture itself. Gogol's Dead Souls in particular is filled with references to samovars. As he describes one character with high social aspirations, "Having become an agent, he quite naturally did as all agents do: kept company and made friends with the better-off villagers, levied higher taxes on the poorer families, got up at nine o'clock in the morning, waited for the samovar, and drank tea."

As historian Audra Jo Yoder writes, this was a time when "cultural elites articulated a national identity that established hospitality and communalism as two of its central tenets." It may be that beloved literature is just as responsible as common usage for championing the samovar as a symbol of Russia.

Today, Russia is still one of the biggest consumers of tea in the world, but most homes now use stove-top kettles instead of samovars to heat their water. Even so, you'll still find the distinctive urns in gift shops, and Russians will still bring them out for a formal occasion. When it comes to exemplifying "Russian-ness," few items do it better than the samovar. Indeed, during one of President Obama's visits to Russia, Vladimir Putin treated his American counterpart to a Russian tea from a samovar. 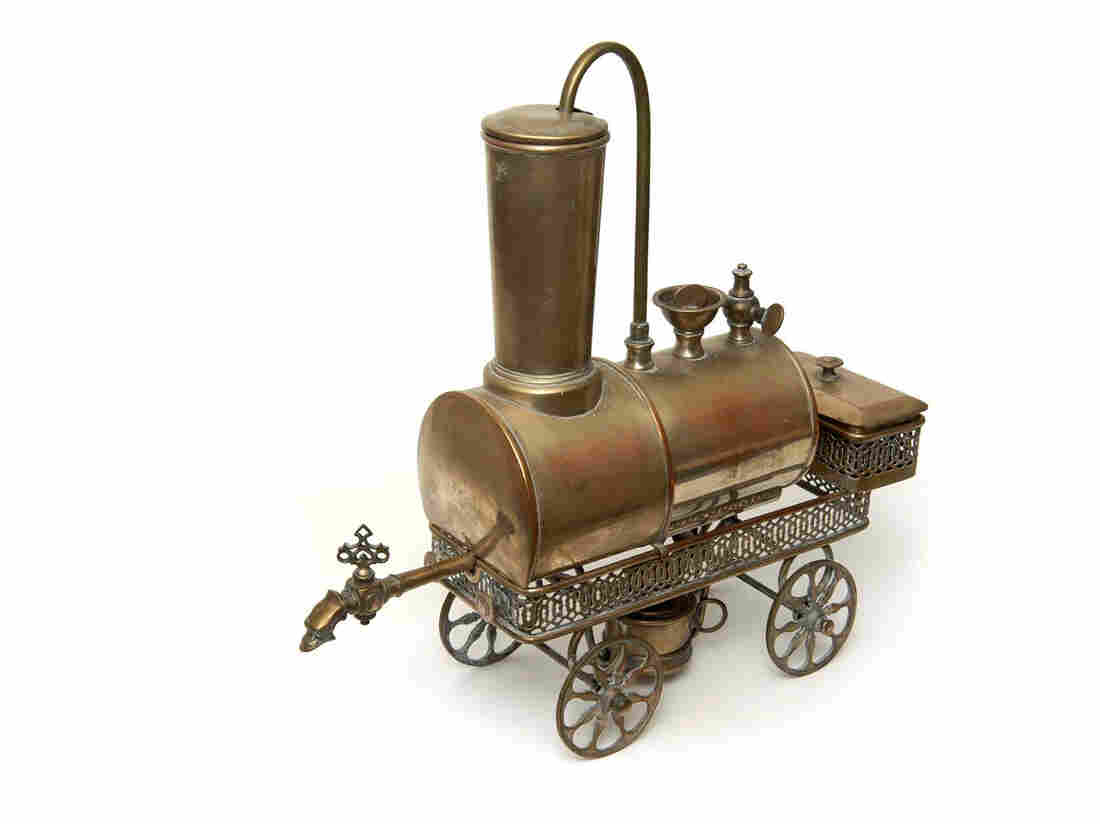 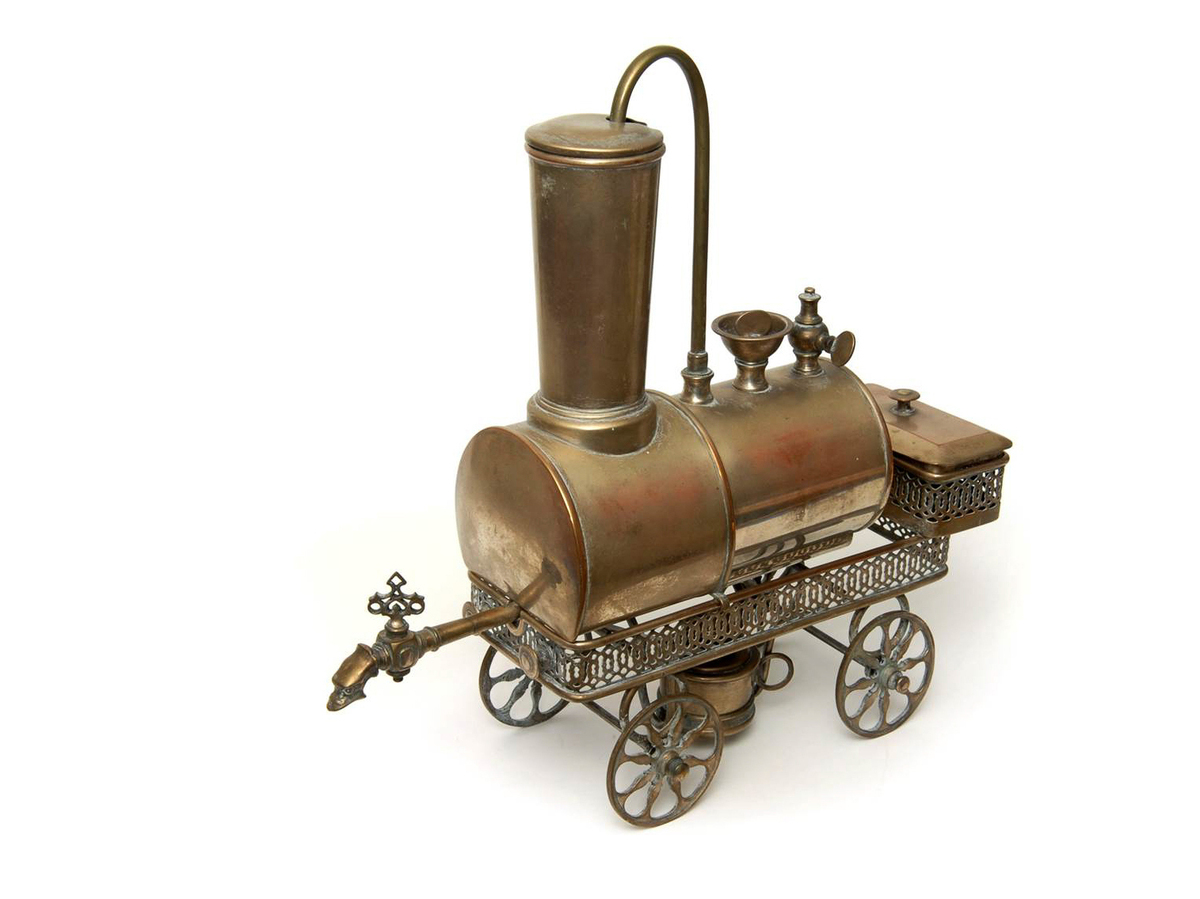 A 19th-century samovar made from silverplate, from the private collection of Sheldon Luskin. On loan to The Museum of Russian Art, Minneapolis

Sheldon Luskin Collection/Courtesy of The Museum of Russian Art, Minneapolis