Accessibility links
Chew On This: The Science Of Great NYC Bagels (It's Not The Water) : The Salt Popular myth has long credited New York's soft water for the city's irresistibly crusty, chewy bagels. But the chemistry behind a superior bagel is more complicated.

Chew On This: The Science Of Great NYC Bagels (It's Not The Water)

Chew On This: The Science Of Great NYC Bagels (It's Not The Water) 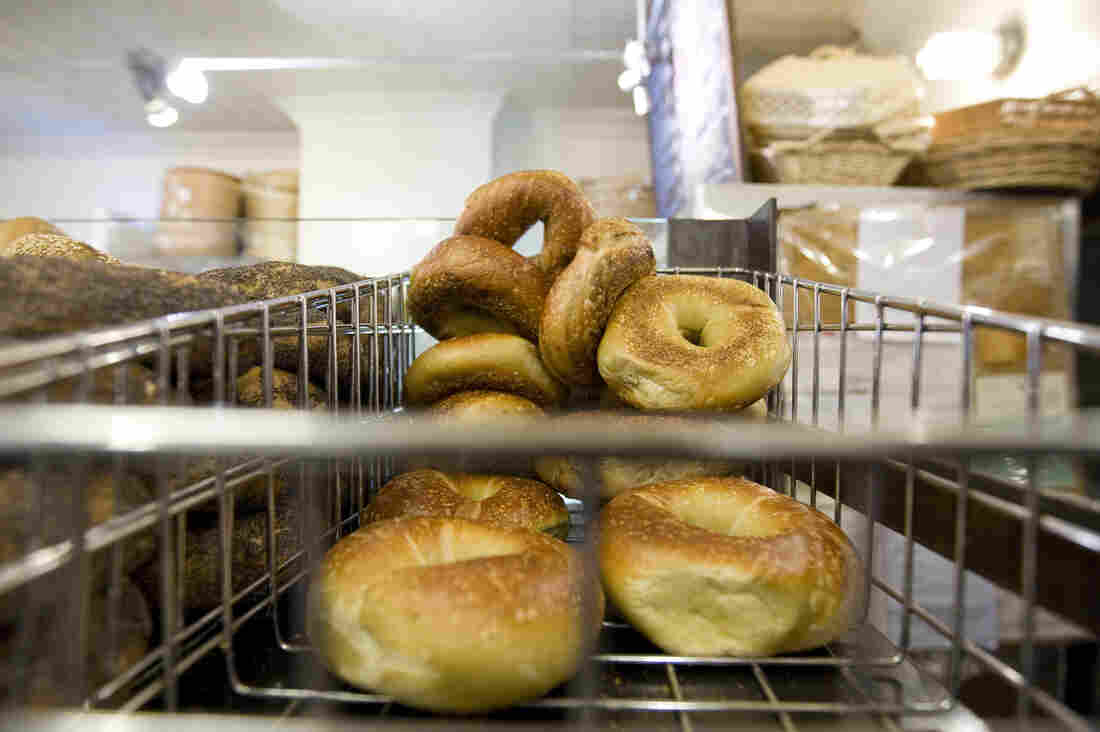 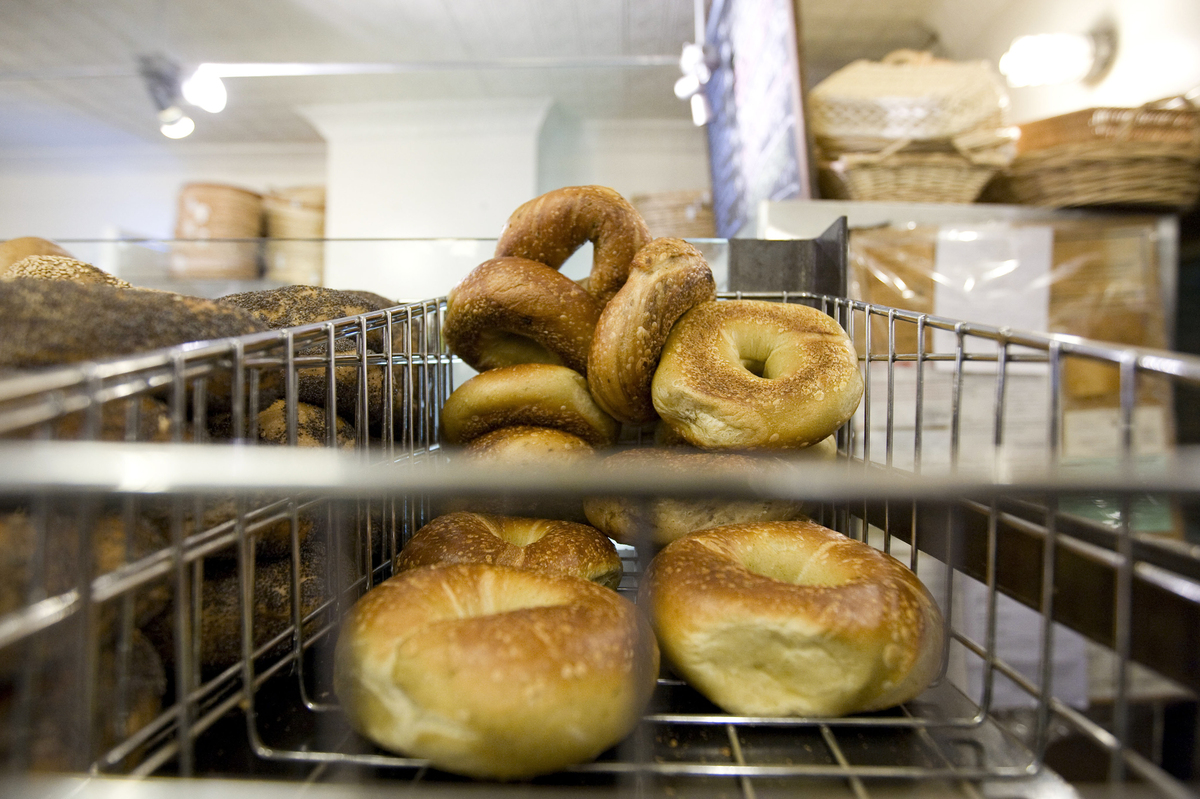 One of the first life lessons I picked up in college was this: The secret to the shiny crust and chewy bite prized in New York bagels is boiling. Any other way of cooking them, my Brooklyn born-and-raised, freshman-year roommate told me, is simply unacceptable.

Now, many years later, it turns out she was pretty much right. In a new video, the American Chemical Society breaks down the chemistry of what makes New York bagels superior to the also-rans — the disappointing "bagels" you often encounter outside of New York that merely taste like bread with a hole in it.

According to popular mythology, the uniquely superb texture of the New York bagel has to do with New York City's water — specifically, its low concentrations of calcium and magnesium, which make it softer.

But while New York's water does play a role in influencing bagel texture, the effect is actually pretty minor, according to the ACS video. Harder water toughens the gluten in the dough, while super soft water can make it goopy.

No Schmear Job: A Brief History Of Bagels And Lox

As chef Richard Coppedge of the Culinary Institute of America explains, superior bagels are made from shaped dough that's first left to sit in a refrigerator for a couple of days. This process is called retarding because the cooler temperatures slow down the activity of yeast in the dough as it rises. This longer, slower fermentation gives the microbes more time to generate tasty flavor compounds.

Then comes the key step to making what Coppedge calls a "true bagel" — boiling. Traditionally, Coppedge tells The Salt, the chilled dough rings are poached or boiled in a solution of water and malt barley for anywhere from 30 seconds to 3 minutes. This pre-gelatinizes the starch in the dough, locking the liquid inside of it and expanding the interior. As the video puts it, it's like flash-frying a steak before grilling it to seal in the juices. The boiling also thickens the crust — Coppedge says it "is essential to produce a more 'chewy' bagel."

So why doesn't everyone boil their bagels before baking? 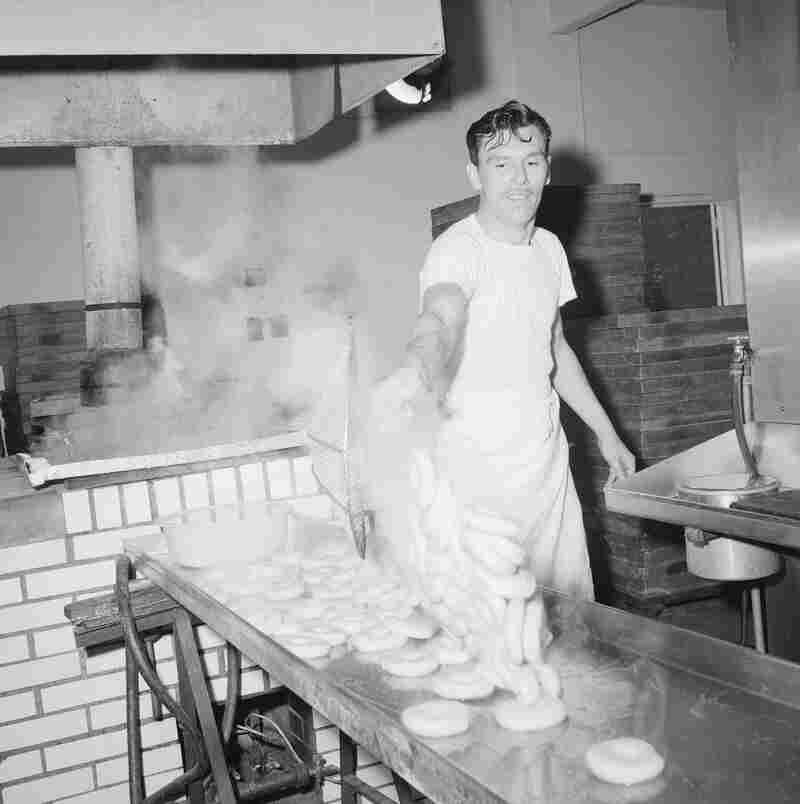 Steaming-hot bagels are scooped out of the water in which they were boiled and dumped onto a stainless steel drain board at a bagel bakery in Queens, New York City, 1963. Traditionally, bagels were boiled, but bakers who use the modern method skip this step. Dan Grossi/AP hide caption 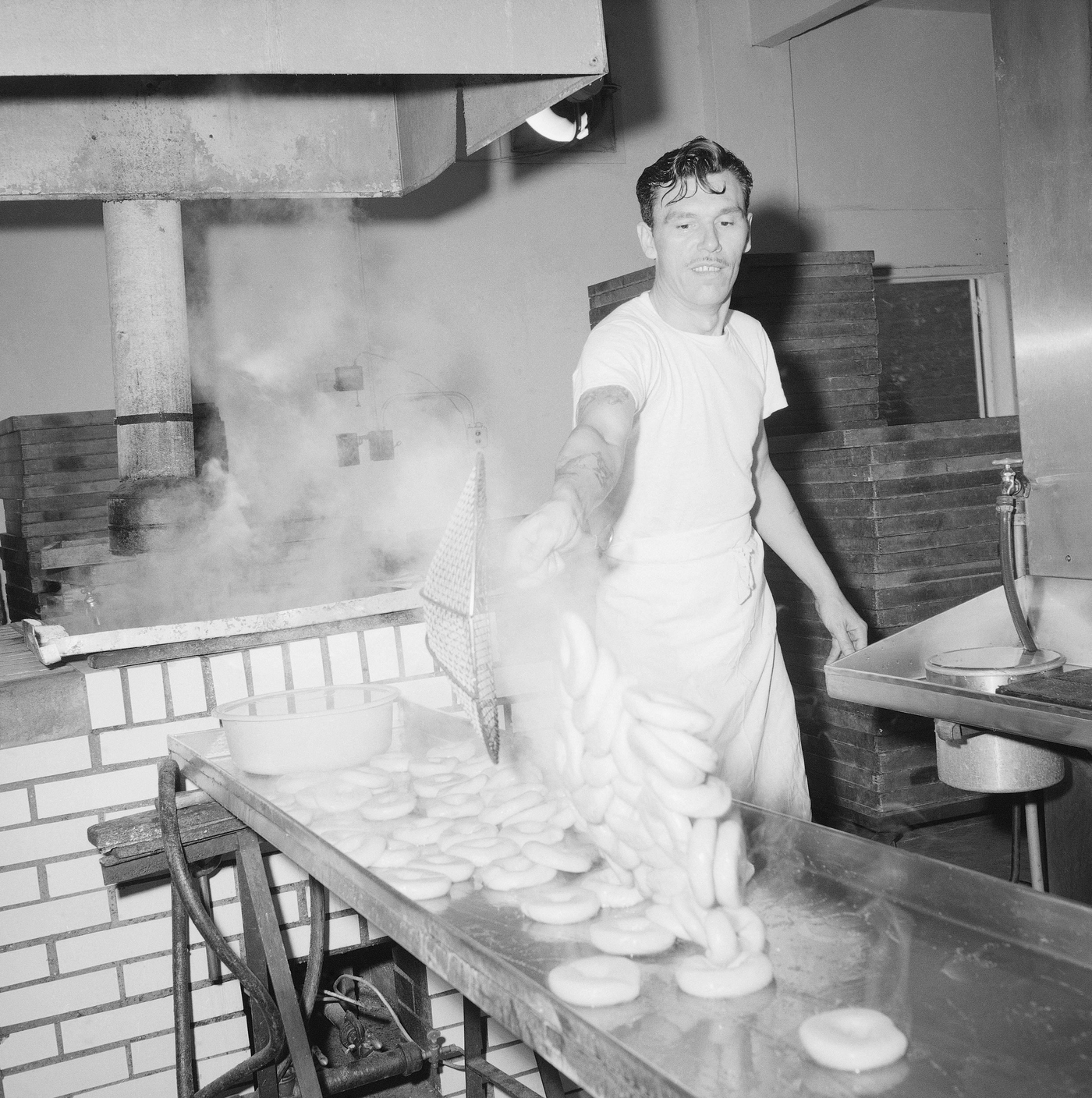 Steaming-hot bagels are scooped out of the water in which they were boiled and dumped onto a stainless steel drain board at a bagel bakery in Queens, New York City, 1963. Traditionally, bagels were boiled, but bakers who use the modern method skip this step.

According to Harold McGee's On Food and Cooking, they used to. The traditional bagels that Eastern European immigrants introduced to New York in the early 20th century were always boiled, he writes. But this step gets skipped in the more modern baking method — which, McGee says, is faster and easier to automate. Instead, the shaped bagels are baked in a hot oven that is also injected with steam.

As Coppedge explains, "This steam will gelatinize the surface only, and encourage more color and shine, but not promote the unique chewiness, because the steam won't get to the starchy interior." The result is a lighter, puffier bagel with a thinner crust.

Coppedge says some folks might actually desire that less-chewy texture. To each his own, I guess. But for me? If the bagel isn't boiled, fuggedaboutit.