Accessibility links
Urban Food Forests Make Fruit Free For The Picking : The Salt Urban orchards are dropping everything from apples to avocados on Seattle, Bloomington, Ind., Boston and several other cities. Advocates say orchards can have longer lasting impact than gardens. 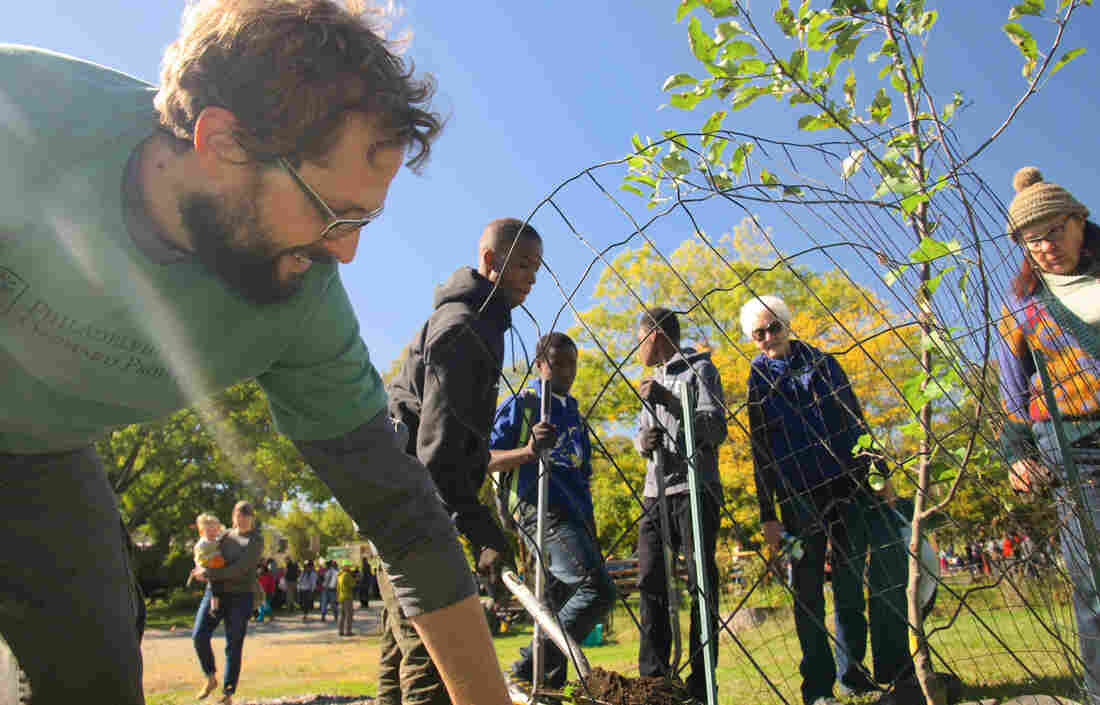 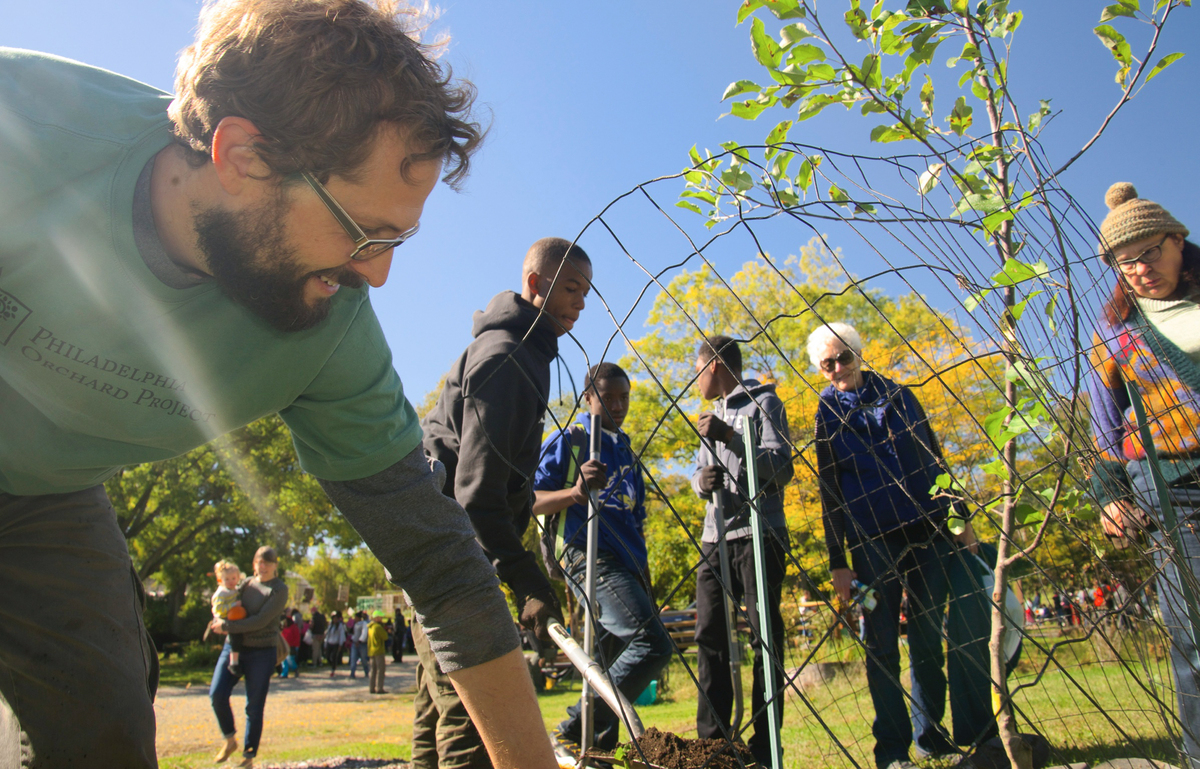 To discover the new frontier of urban farming, you'll have to look up — and look sharp — for hanging fruit.

Urban orchards are dropping everything from apples to persimmons to avocados on Seattle, Bloomington, Ind., Boston, Toronto, San Francisco, Los Angeles and other North American cities. Groups like the Portland Fruit Tree Project advocate for public access to existing fruit trees so that people can glean crops that would otherwise go uneaten — an idea some are calling radical. Other groups are more interested in planting new groves of fruit trees on previously fallow city land.

The Gift Of Graft: New York Artist's Tree To Grow 40 Kinds Of Fruit

Fruit trees produce food, but also provide shade, keep greenhouse gases out of the atmosphere, improve water quality and may even deter crime. Advocates say they also have a longer lasting impact on communities than vegetable beds.

"When you plant lettuce, you produce food for today, which is great, but when you plant a tree, you're feeding people tomorrow," says Nina Beth Cardin, director of the Baltimore Orchard Project, a program of the Baltimore non-profit Civic Works. The orchard project has planted thousands of apple, serviceberry, pawpaw, fig and pear trees on public and private land around Baltimore. City officials, striving to meet a goal of increasing the city's tree canopy, have been providing starter trees to Cardin's group, which in turn helps churches and schools plant and learn to maintain fruit trees.

In Philadelphia, fruit trees have a special knack for bringing people together, says Phil Forsyth, executive director of Philadelphia Orchard Project. Since a large tree takes up space, communities are more likely to treat it as a public resource, with the crop harvested and shared among many people, Forsyth says. 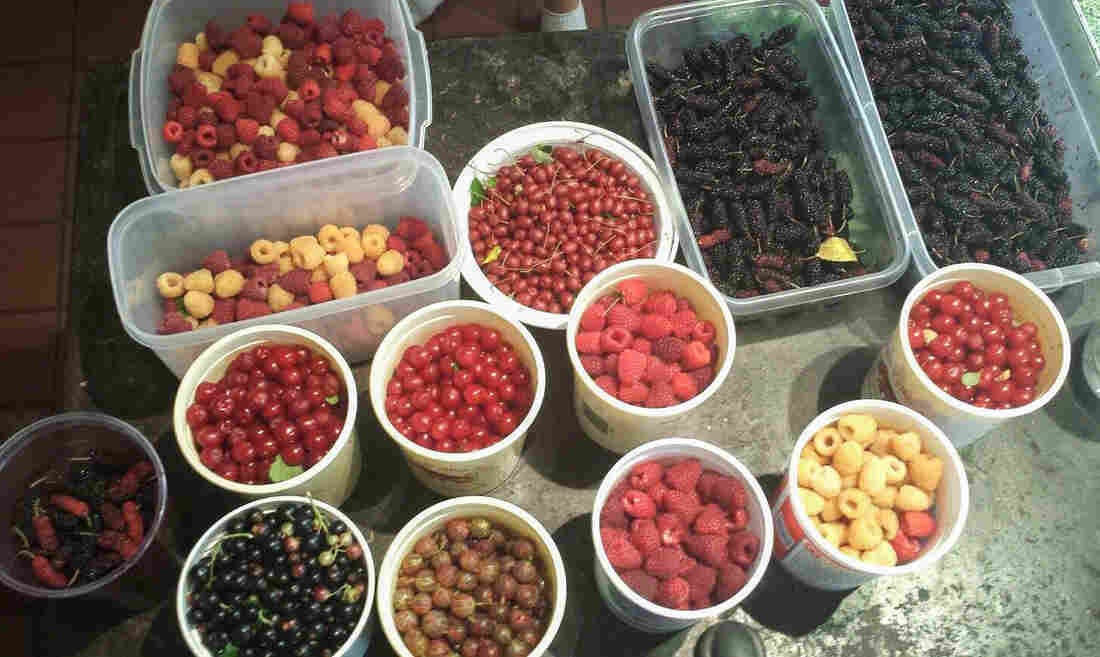 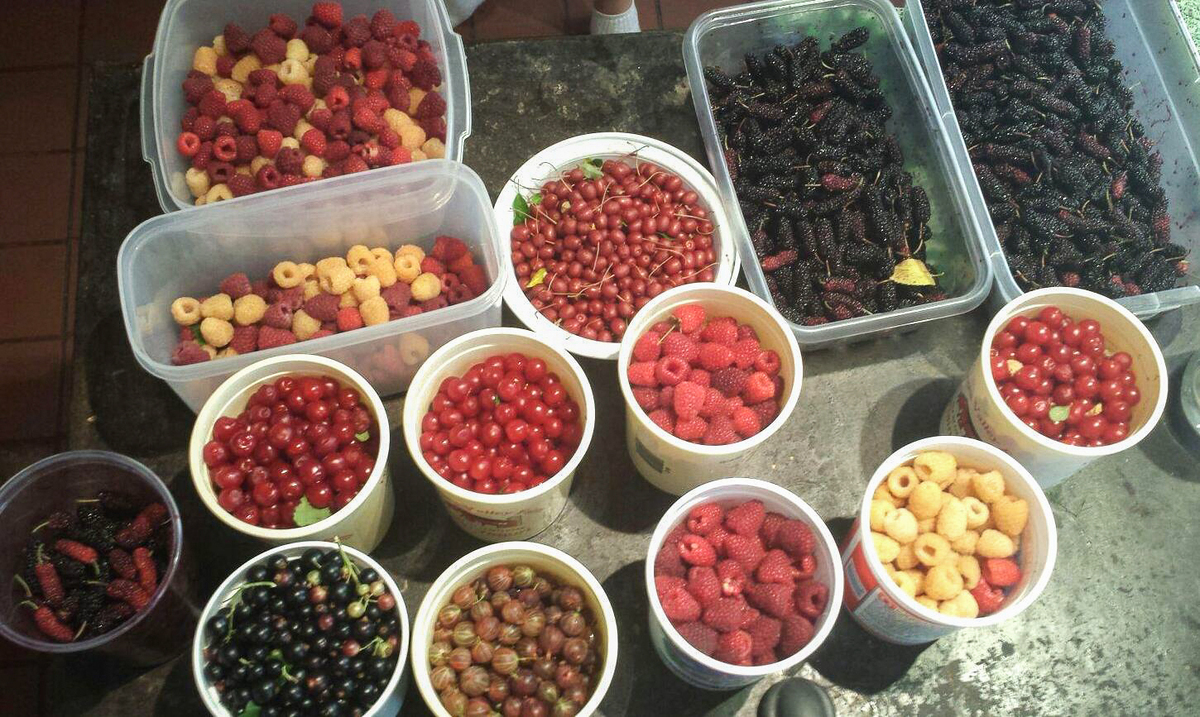 Forsyth's organization, founded in 2007, has helped plant nearly 40 orchards in and around Philadelphia and maintains a nursery stocked with small potted figs, cherries, mulberries and more. The organization provides these young trees to groups and individuals who apply for assistance to plant an orchard —and meet some basic criteria. Forsyth says applicants must have spaces with sufficient sunlight and soil, and must also have long-term property leases or ownership of their land.

While fruit orchards have some advantages over other urban agriculture initiatives, they their own disadvantages as well. Trees can be relatively expensive, and tricky to plant. While a packet of seeds sufficient to fill a veggie bed may run a few bucks, a single fruit tree sapling may go for $30 or more.

And, while vegetable gardens can be started by, at minimum, tossing a handful of seeds over the soil, most trees must be started by grafting a branch of a desired variety onto an existing tree, often referred to as rootstock. With grafting, it's possible to grow many varieties of fruit on a single tree.

Commercial nurseries generally handle the relatively technical work of tree propagation and sell trees several years old in small pots. (Figs are an anomaly and may be propagated very easily by rooting small branch cutting in the earth, with no grafting required.) 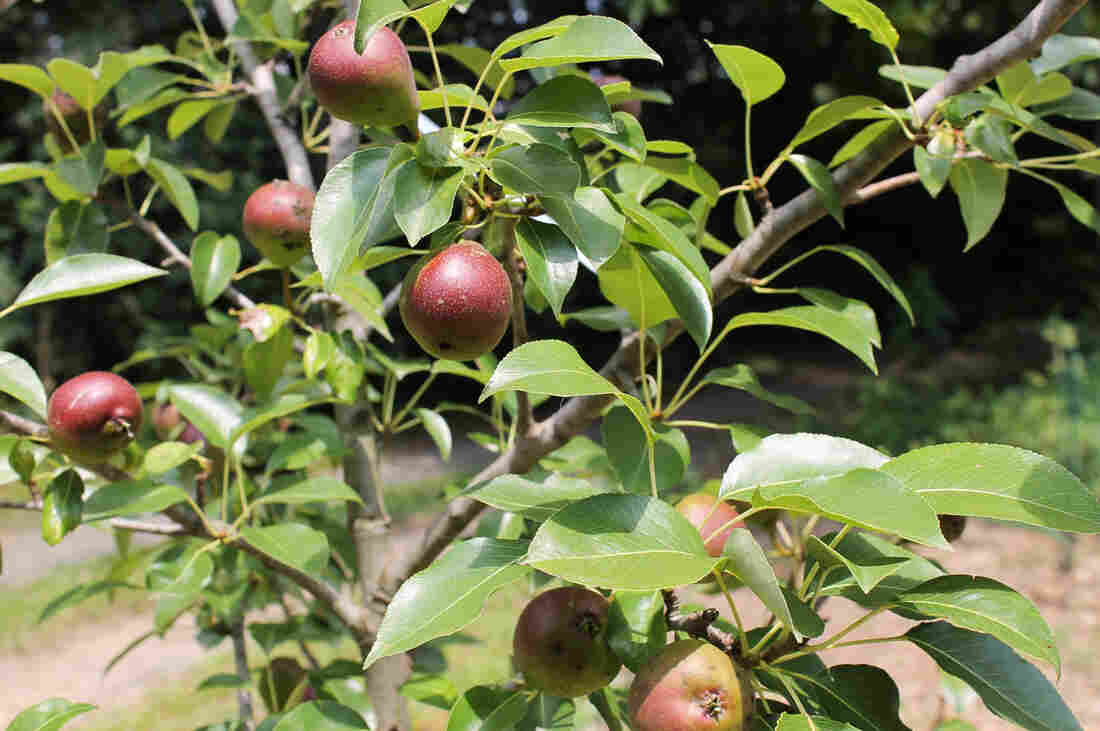 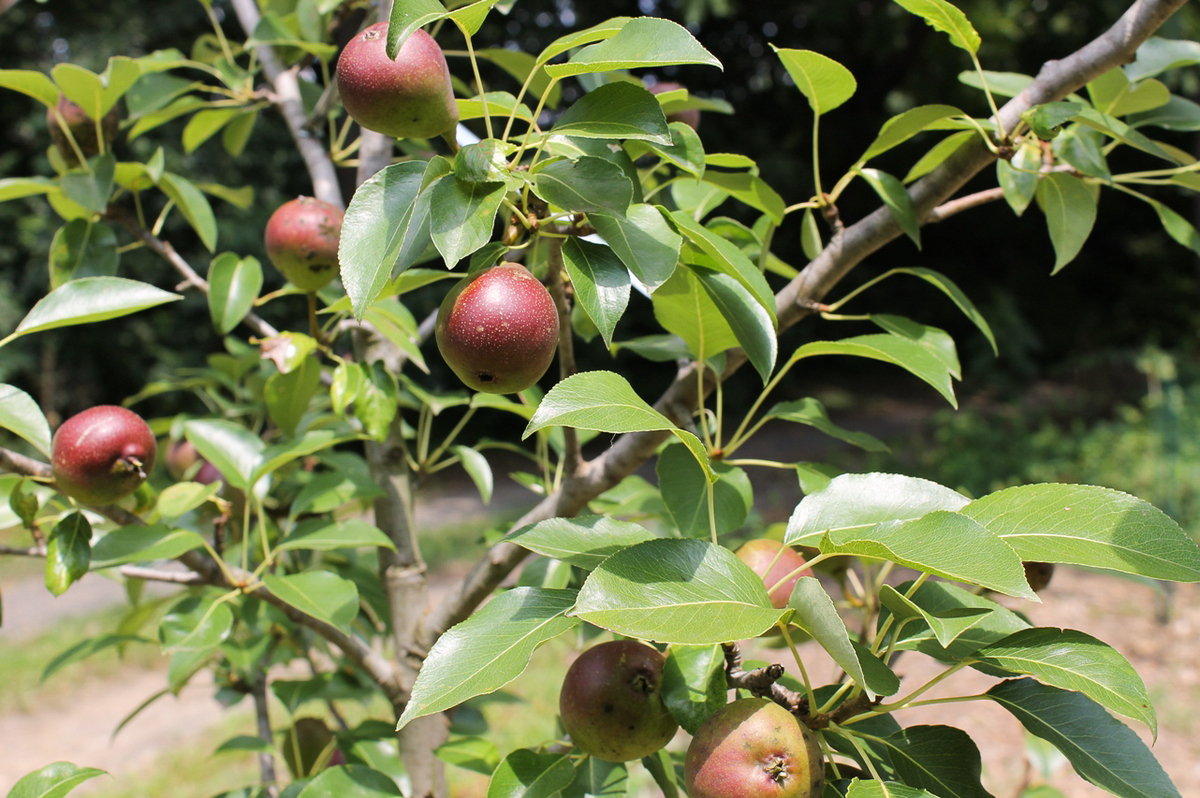 Pears ripen on the tree at the Awbury Arboretum Food Forest, one of the 48 sites of the Philadelphia Orchard Project.

Once they are planted and their roots have set in the soil, trees and vines may be relatively self-sufficient and require far less maintenance work than vegetable gardens. However, cold winters can kill fruit trees — especially those adapted to warm climates. In the Midwest and the Eastern U.S., fig trees, for one, often get bundled up for the winter. An effective method, Forsyth says, is to wrap a thick insulating layer of autumn leaves around the tree with chicken wire.

Such measures are unnecessary in the mild Mediterranean climate of San Francisco, where a garbage dump was cleared and turned into a four-acre farm and orchard in the mid 1990s on the relatively warm, east side of the city, near the Bernal Heights neighborhood. Today, Alemany Farm is largely devoted to artichokes, lettuce and strawberries. But the biggest draw is the fruit trees. Subtropical species, including loquats, figs, pineapple guavas and avocados, thrive on the farm, and the public is welcome to come and pick the fruit.

Alemany also boasts a vineyard of 350 Pinot Noir vines, which Elly Hartshorn planted in 2013 as part of her winemaking project, Neighborhood Vineyards. The San Francisco vines should produce their first crop this year, Hartshorn tells The Salt.

"In a city where I might not have a house of my own, a vineyard is a space where I can establish long-term roots," says Hartshorn.

Of course, the labor required to establish and maintain fruit trees and vines means it's important to ensure that the sites are protected from development. Cardin says her group wants a guarantee that the land will not be built on for at least 20 years before they provide orchard planting assistance.

In San Francisco, a city program that gives tax breaks to landowners who turn their property over to farming ventures requires they do so for at least five years — which Hartshorn notes is not enough time to make a vineyard, or an orchard, worth the effort of planting. Many fruit trees don't bear a substantial crop until they're several years old.

But in the meantime, they may provide habitat for birds and insects and shade for people and animals. Tree roots help thwart erosion, and the trees themselves grow by drawing carbon from the atmosphere, and producing oxygen. Trees' beneficial effects on air quality, and their potential for helping curb climate change, are a reason that city governments are now encouraging landowners to plant them.

Cardin says her hope is that, by planting even a few trees, a community will make the choice to keep that piece of land undeveloped for decades.

"Trees have a true spiritual element," says Cardin. "The act of gardening itself has a spiritual value, but not the lettuce itself. It's the presence of the tree, the constancy of the tree, that's so special."