Accessibility links
Bugs: Not What's For Dinner — Until They're Tastier, Maybe : The Salt A U.K. researcher says the environmental argument for eating bugs isn't working on its own. She says chefs and policymakers must "make insect dishes appeal as food, not just a way to save the planet."

Bugs: Not What's For Dinner — Until They're Tastier, Maybe

Bugs: Not What's For Dinner — Until They're Tastier, Maybe 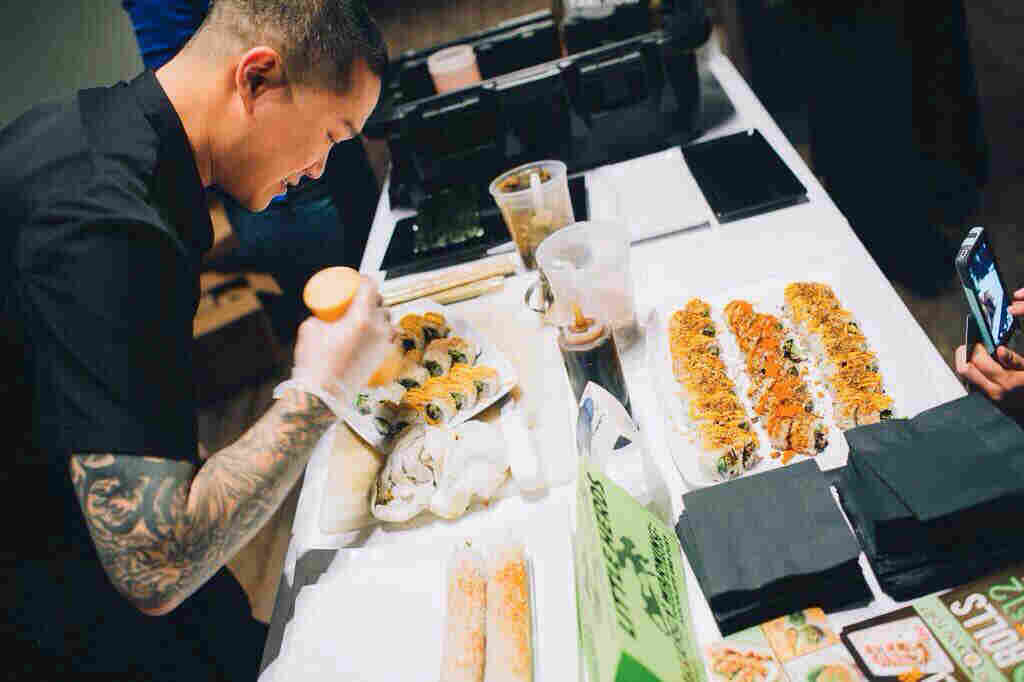 Sushi entrepreneur Peter Yung makes an Insectopia Roll at the Future Food Salon in Austin, Texas, in February 2014. A British researcher writes that chefs and others must "make insect dishes appeal as food, not just a way to save the planet." Courtesy of Little Herds hide caption 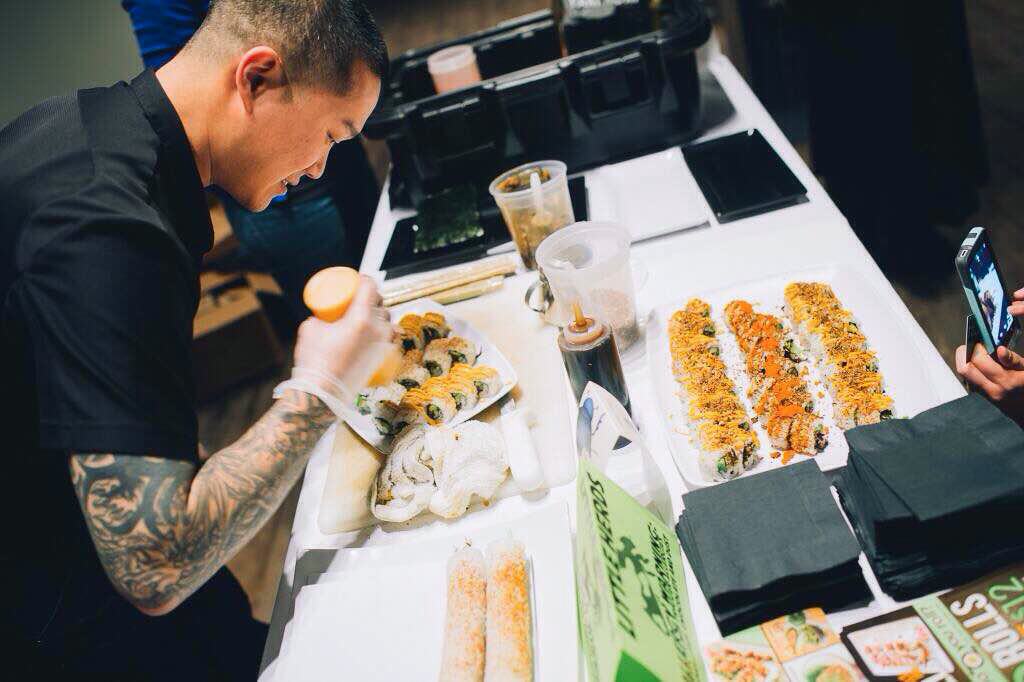 Sushi entrepreneur Peter Yung makes an Insectopia Roll at the Future Food Salon in Austin, Texas, in February 2014. A British researcher writes that chefs and others must "make insect dishes appeal as food, not just a way to save the planet."

In the last couple of years, we've detected a faint buzz about crispy crickets and crunchy mealworms. Companies pedaling scorpion lollipops and peanut butter-and-jelly protein bars made with cricket flour have thrust their wares into our hands and mailboxes.

It's truly gotten easier to snack on bugs, should you want to do so. And everyone from the earnest eco-entrepreneurs in towns like Austin and Boulder, to international luminaries like Kofi Annan to the Food and Agriculture Organization are raving about how sustainable bugs are compared to meat.

But that doesn't mean the Western world, which doesn't have much of a history of entomophagy, is biting. Much.

Ophelia Deroy, a British researcher, tells The Salt most Westerners she has surveyed in randomized studies say they've hardly ever eaten insects in their life. And in a short column published Wednesday in Nature, she explains her hunch as to why the call to eat insects for nutritional and environmental reasons isn't being widely heeded yet.

Policymakers and the media have assumed that Westerners are disgusted by bugs because we associate them with contamination and disease. So the focus has been on trying to convert the uninitiated by making an environmental case for insect cuisine, and by noting that 2 billion people in around 100 countries (like Thailand) already enjoy many different insects in a range of dishes, Deroy writes.

Instead, Deroy argues, "We should think less about combating disgust and more about appealing to taste."

So what does that mean? Well, Deroy, who's at the Centre for the Study of the Senses at the University of London, thinks it's about making the experience of eating them more enjoyable and less scary. For her, that happened when she tried crickets sprayed with a "beautiful golden dust" on the side of a salad.

It's true that many insects may not be especially enticing at a sensory level, at least at first: They're dry, and their wings and legs may crumble strangely in your mouth.

Matt Schnarr bites into a mealworm lollipop at the Pestaurant event in Washington, D.C., in 2014. Maggie Starbard/NPR hide caption

Matt Schnarr bites into a mealworm lollipop at the Pestaurant event in Washington, D.C., in 2014.

But there are other ways around this that don't involve visual seduction with gold dust. Last summer, we attended an event called the "Pestaurant" that featured turkey burgers with ground-up and whole grasshoppers. As we reported, the burgers were juicy and full of flavor, thanks, in part, to a brilliant secret ingredient: duck fat. We watched as many skeptics gobbled the burgers, clearly happy to accept the unfamiliar addition to the succulent dish.

Entomophagists agree that bugs will need some culinary champions to really go big. 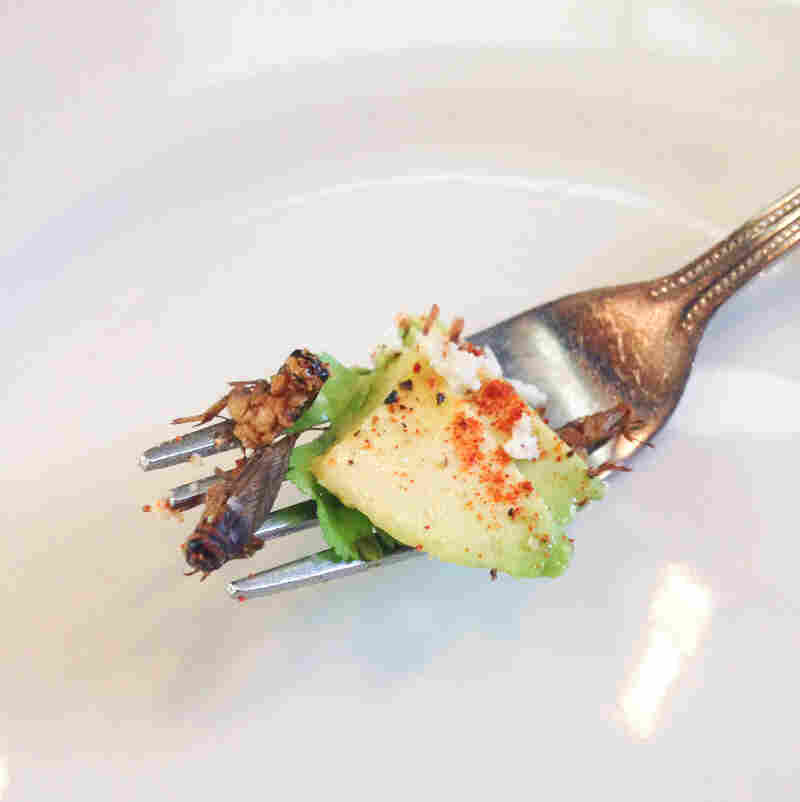 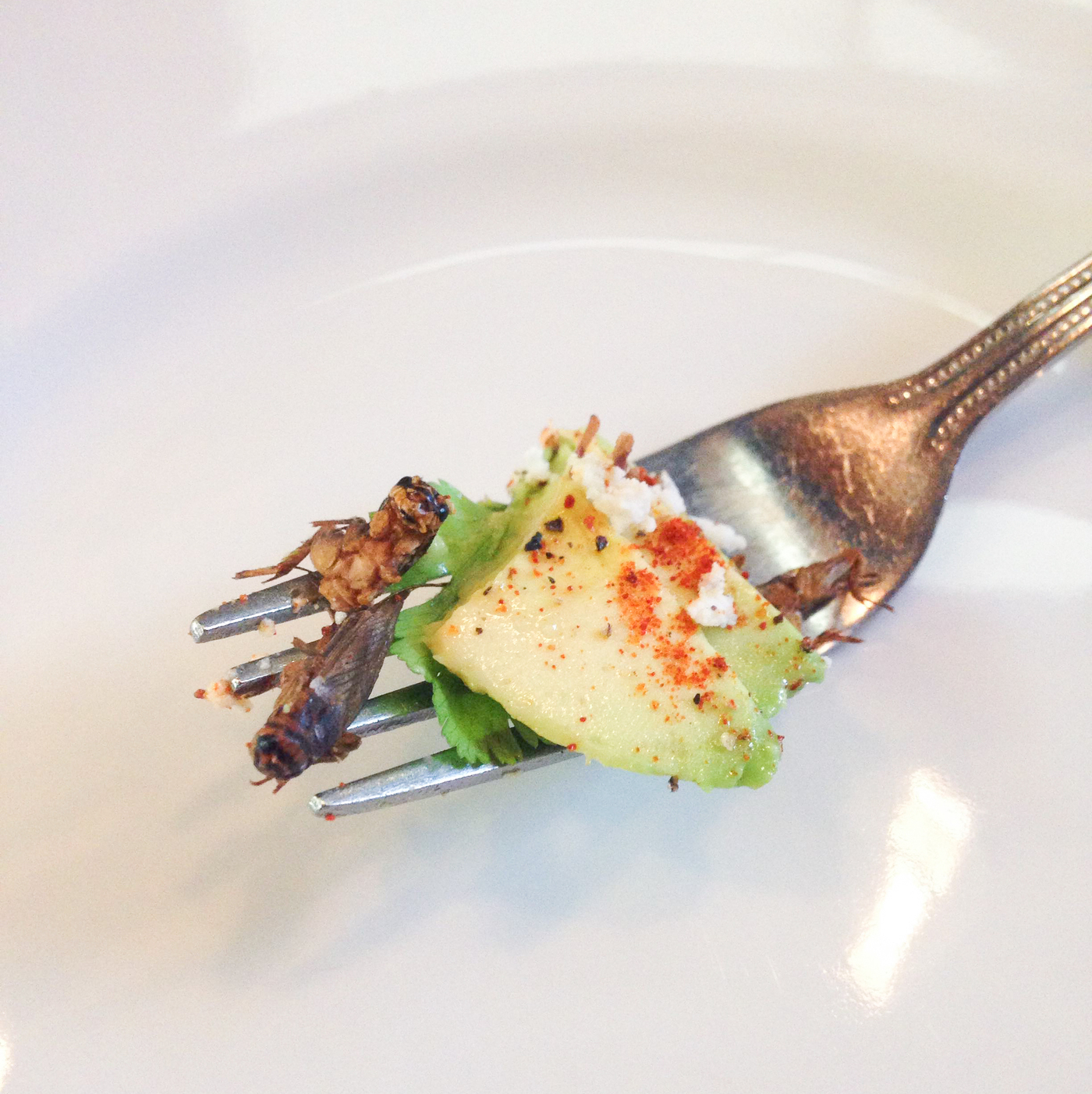 "Chefs (and their celebrity diners) will have to play a leading role in making crickets (or any other edible insects) attractive and desirable, in the same way that California chefs turned dangerous and disgusting raw fish into sushi, the dish of Hollywood elites," Robert Nathan Allen, founder of Little Herds, a group that's working to grow the market for edible bugs, tells The Salt in an email.

Deroy thinks some insects could also stand to be re-named, a la the Chilean sea bass (formerly Patagonian toothfish). And indeed, there have been efforts to rename locusts "sky prawns" to make them more appetizing.

"And we should not forget those with a sweet tooth: many insects lend themselves naturally to desserts," she writes.

Bee ice cream, maybe? There's got to be more to insect sweets than those scorpion lollipops, which are not going to be for everyone.

"Appealing to logic and morality only gets you so far," says Allen. "We need to make it desirable and affordable before we can hope to change the minds (and tastebuds) of the average American. "