Accessibility links
In This Test Kitchen, The Secret To A Great Cookbook Is Try, Try Again : The Salt Yotam Ottolenghi and his partner have a thriving food empire that includes wildly successful cookbooks. We go inside their London test kitchen as recipes are put through their paces. 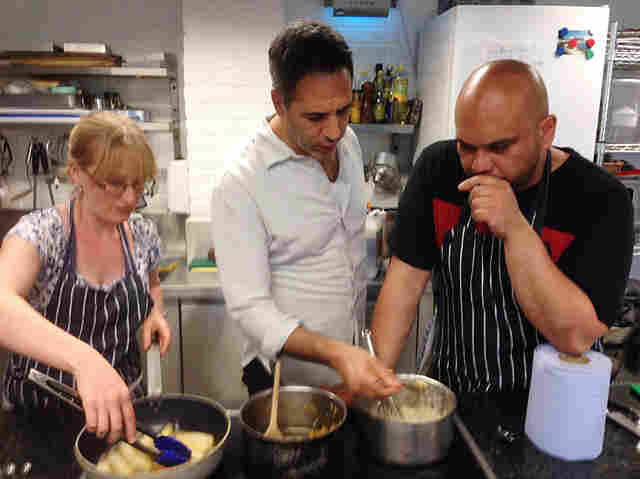 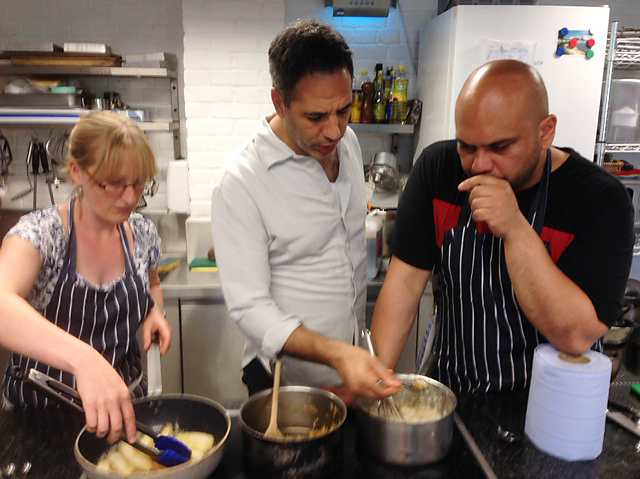 Underneath railway arches on a nondescript street in North London, you'll find an old warehouse that's the epicenter of the Ottolenghi food empire.

Jerusalem-born food impresario Yotam Ottolenghi and his business partner, Sami Tamimi, started out over a decade ago with one restaurant in London selling fresh, Middle East-inspired food. The business now encompasses several restaurants, an expanding online food business and some cookbooks that have been wildly successful on their home turf and here in the U.S.

Chef Chat: We Pick The Brains Of Ottolenghi And Tamimi

Not only is this location home to the Ottolenghi bakery and the online business, it also houses the test kitchen for those cookbooks.

Last summer, I spent the day there as recipes were tested for the forthcoming book Nopi: The Cookbook, featuring meals from their acclaimed Central London restaurant.

The kitchen itself is not that special: It is a manageable size and doesn't have any outlandish equipment or gizmos. "This is completely a replication of a home kitchen," recipe developer Esme Robinson tells me. The organizing principle seems to be to make the the test kitchen a place that feels just like your kitchen at home might.

And so this kitchen is unadorned and functional — I've seen larger, more elaborate set-ups in suburban Washington, D.C. McMansions. The space does have one distinct disadvantage: an electric stovetop, "which everyone hates," Esme concedes.

Nopi head chef Ramael Scully agrees. "The general consensus is that the gas cooker is best." 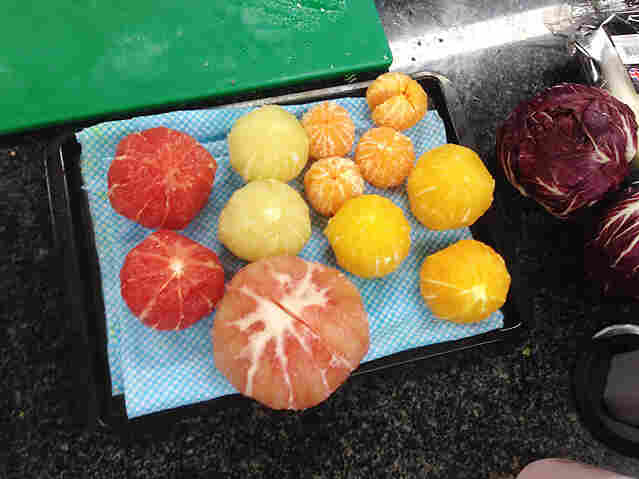 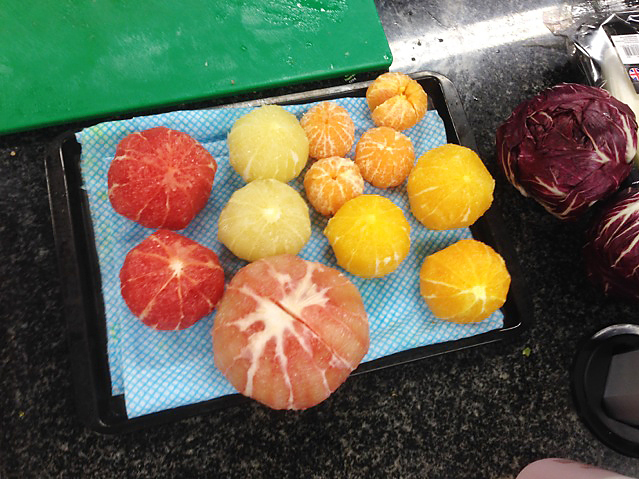 However, when your kitchen is under the railroad tracks, there are no gas lines to be had, so electric it is.

Jerusalem: A Love Letter To Food And Memories Of Home

Also worth noting: The staff buys the ingredients for the recipes from their local supermarkets on the way to work. For owner Yotam Ottolenghi, this is key.

"We really try to emulate what people would do at home," he says. "We could use restaurant suppliers easily, but the whole idea is not to." Instead, he says, he wants to "try to get it tasting and looking like it would if people are using normal ingredients. Because I know 80 percent of people would not go to specialty shops. They'll shop in their local supermarket."

As any baker knows, precision is vital in measuring. I'm surprised at how important it is for non-baked goods, too. Ottolenghi's writing collaborator, food writer Tara Wigley, is emphatic: "If something says 1/3 of a teaspoon, you'll bet it's been tested with a ½ of a teaspoon and a ¼ of a teaspoon." The Ottolenghi staff believes it's easier for home cooks to improvise to taste after they've mastered the recipe as written. So the book won't instruct you to throw in "a pinch of this" or a "bunch of that." You can do that yourself once you've figured out the basics.

That focus on precision extends to the cooking tools needed to tackle a given recipe. "It seems silly to write 'take a baking tray 25 cm by 45 cm,' " says Ottolenghi. But "we get really different results with different utensils — really, really different. It's kind of amazing." 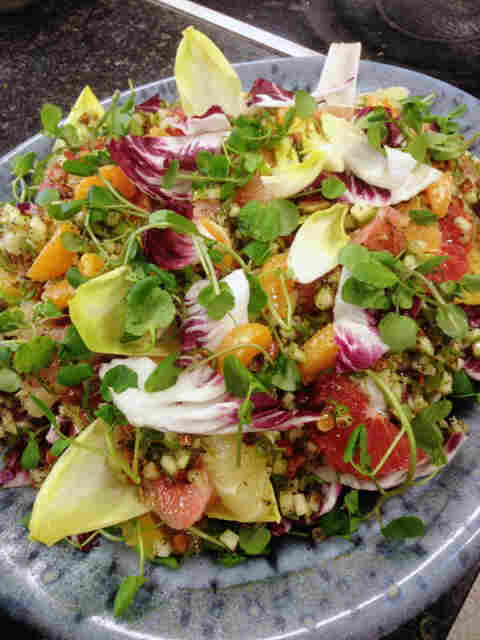 It makes perfect sense when you think about it. For example, take a roasting chicken. He says if you want to end up with 1 cm of liquid after the bird is fully cooked – "so it's slightly braised and steamed, then you won't get that if the pan is massive."

Precise language is also critical when translating a restaurant recipe into a cookbook recipe that a home cook can easily comprehend. On this day Ramael Scully, Nopi's head chef, is spending the morning trying out recipes for citrus salads and his own version of kimchi, the Korean pickle dish. He has a piece of paper with his ingredients and hand-scrawled instructions he's jotted down while preparing the dishes for the restaurant.

Recipe developer Esme Robinson's first task is to decipher Scully's notes. She has already received the recipe for kimchi and is preparing the ingredients as Scully arrives. This is a dish that Scully has prepared repeatedly, so he knows what he's talking about. But if his instructions aren't spot on, there is confusion. And Robinson is confused.

"I'm constantly coming up against questions," she points out. "For example, here I've got '2 cucumbers, peeled quarter lengthways, seeds removed and cut into long thin strips.' " She confesses she's not exactly sure what "long, thin strips" means.

A discussion ensues. Should they be thin-sliced? Julienned? Peeled into strips with a vegetable peeler? How would the shape affect the taste? Questions like these drive the team to test recipes over and over, refining the instructions to their exacting standards. Scully points out that a single recipe might get tested, five, six, seven times before getting the OK.

This obsession with precision is vital to the alchemy of a great cookbook, Ottolenghi says – gorgeous photos alone can't carry the day.

"Often, recipe books are not meticulous enough, and then the recipes don't work," he says. "So I'm quite proud to say ... our recipes work well because of the hardships of testing and retesting and double testing. I think the recipes are pretty reliable."

And, he adds, he hopes that reading his books is as enjoyable as eating the foods they help you prepare.