Accessibility links
Cod Comeback: How The North Sea Fishery Bounced Back From The Brink : The Salt A decade ago, fishermen trying to catch North Sea cod were coming up empty. Now, thanks to strict fishing rules put in place to halt the decline, this fish tale looks headed for a happy ending. 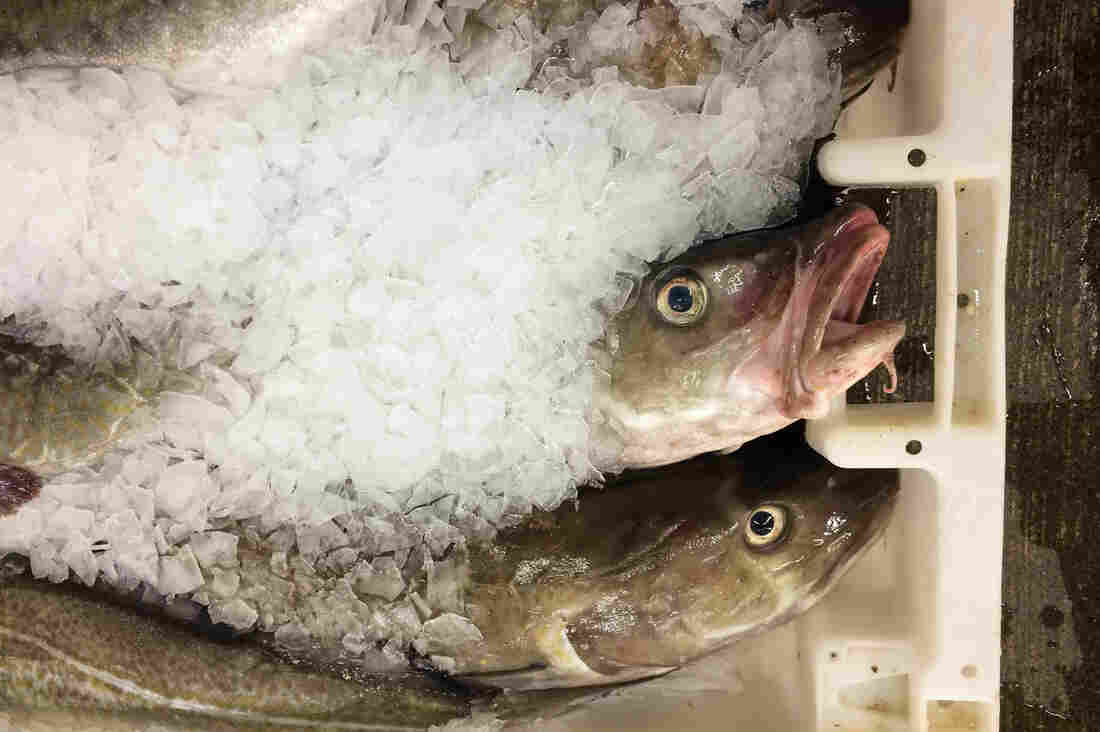 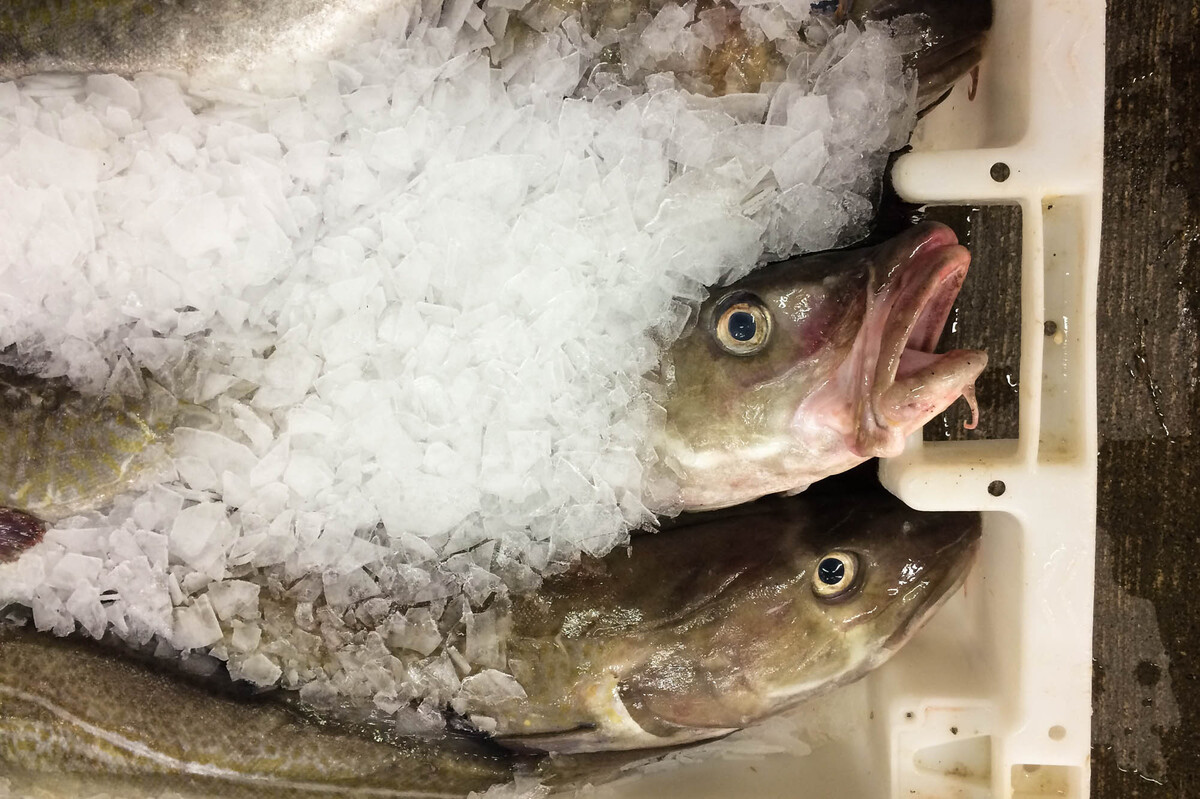 Fish for sale in the fish market in Fraserburgh, Scotland.

But a decade ago, it looked like people were eating the fish to the brink of collapse. Now the trend has turned around, and the cod are coming back.

We pick up this fish tale, which seems to be on its way to a happy ending, at an early morning fish auction in Fraserburgh, Scotland, where buyers and sellers are lined up alongside hundreds of boxes containing cod, hake, monkfish, sole and every other kind of fish you can imagine from the North Sea.

This auction is not a place for fancy chefs and home cooks. The sales are in bulk, and most of the buyers and sellers here come from generations of fishermen. Like market superintendent Ian Buchan — he spent most of his life at sea, until it became just too hard to catch fish.

"People were saying there was no cod. Ten years before I stopped, at least 150 miles to get fish. Now, 20 miles. Fish is everywhere," Buchan says. 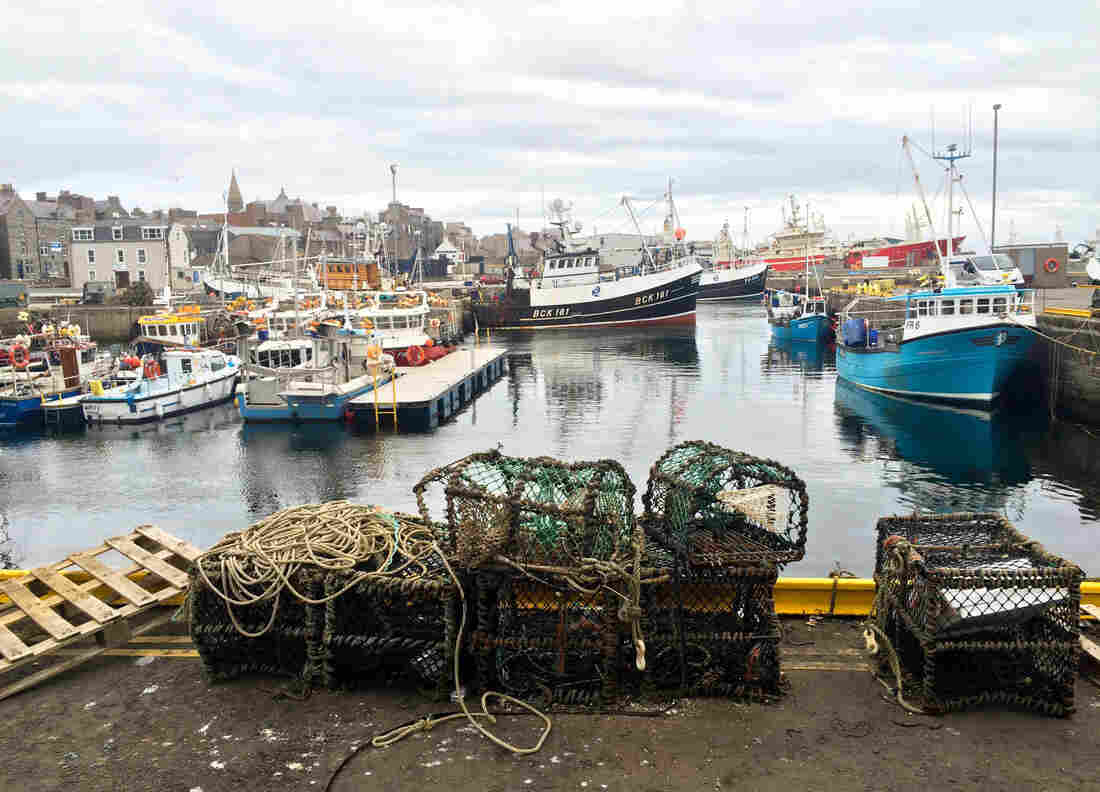 A view of the fishing port in Fraserburgh, Scotland. A decade ago, fishermen trying to catch cod were coming up empty. Now the cod and hake catch is rebounding. Ari Shapiro/NPR hide caption 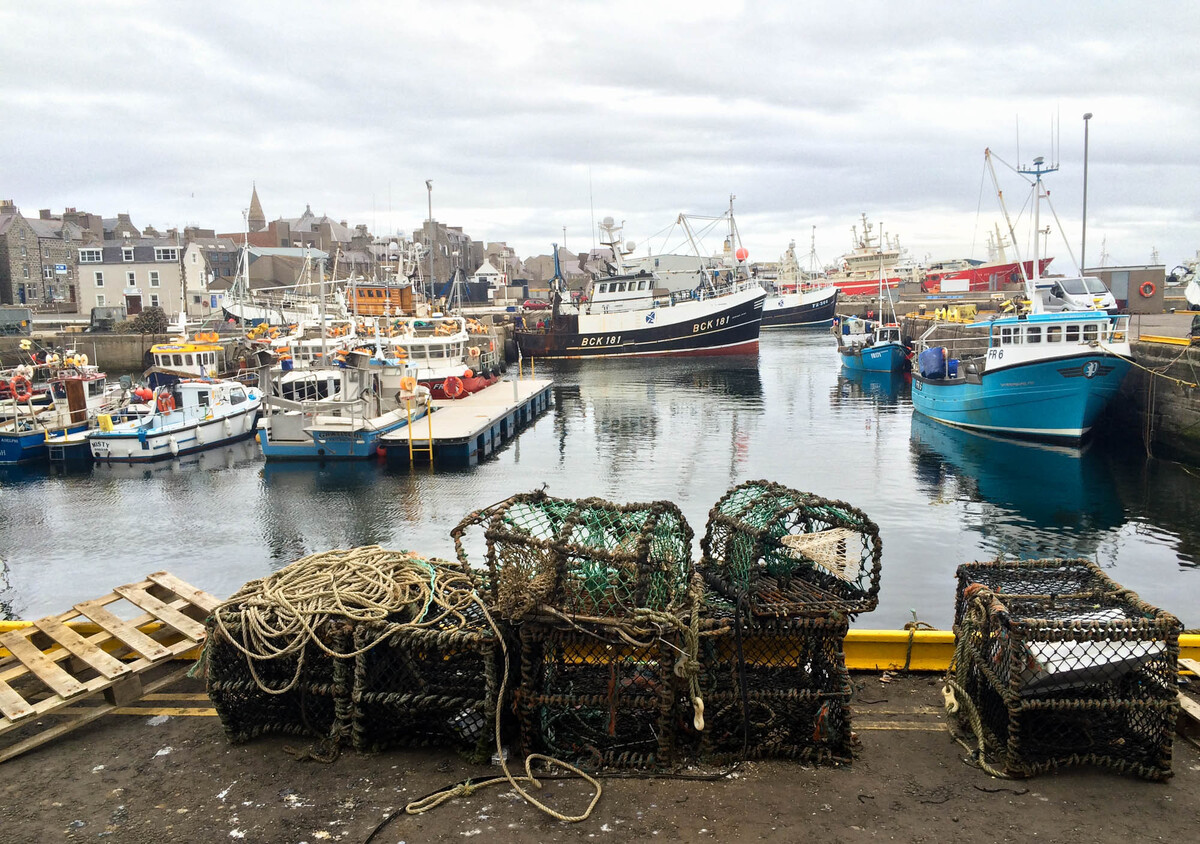 A view of the fishing port in Fraserburgh, Scotland. A decade ago, fishermen trying to catch cod were coming up empty. Now the cod and hake catch is rebounding.

"We've seen a big explosion in the cod and hake," says Alan Mutch, who runs the fish salesmen's association here. "We're definitely seeing an upsurge in that. And in fact, now vessels — because of the restrictions on the amount they're allowed to land — vessels now have to steam to other areas to get away from cod."

This is a huge turnaround from just a decade ago, says Robin Cook, a scientist who used to run the region's fisheries research center. He's now with Strathclyde University in Glasgow.

Back then, Cook was the go-to expert for stories on fishery collapse. He was quoted in programs with titles like Goodbye Fish and Chips and Costing the earth — In Cod We Trust.

"It's interesting, you get a lot more interviews when things are bad than when things are getting better. So this is certainly quite a change," Cook says of our conversation.

In the late '90s, scientists say fishermen were pulling about 60 percent of the cod out of the water each year in the North Sea. It doesn't take an advanced math degree to calculate that that is unsustainable.

So about 10 years ago, the government bought about half of the fishing boats in Scotland and destroyed them. The boats that kept working were put under strict regulations — the number of days they could spend at sea, the number of cod they could catch.

And to Cook, it looks like the program is working. "I certainly in the past would've avoided buying cod, whereas I wouldn't now," he says. 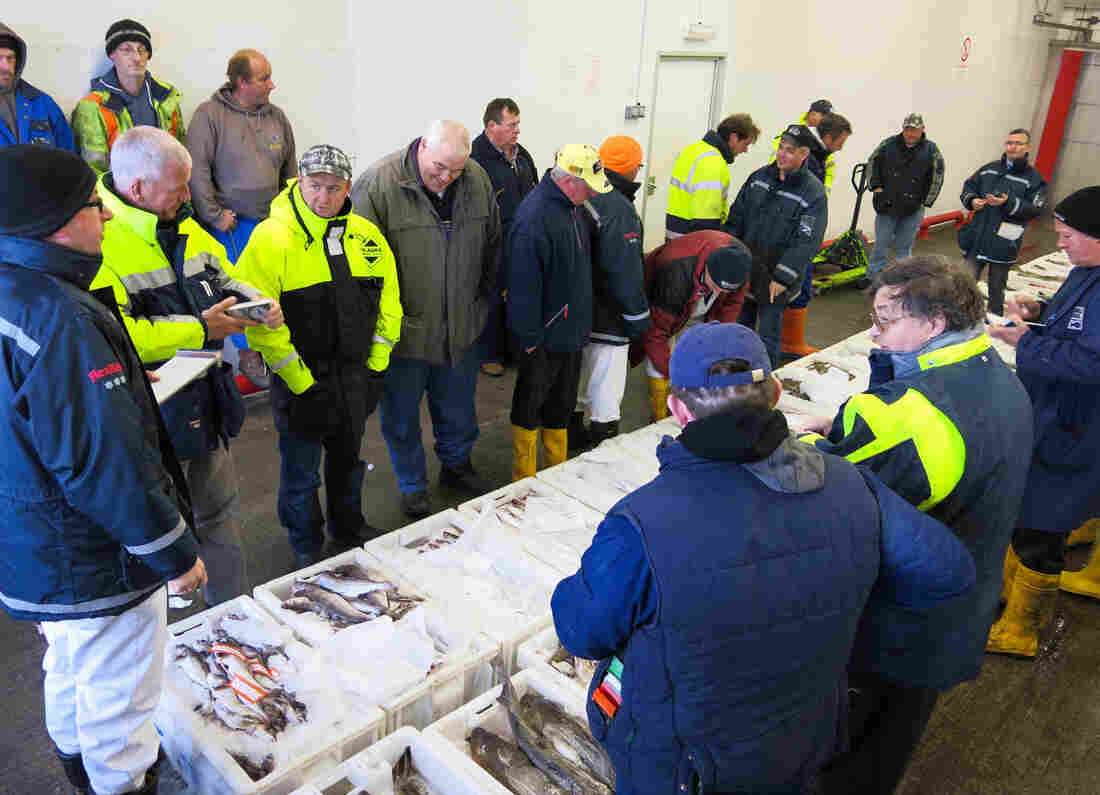 Most of the buyers and sellers at the Fraserburgh fish auction come from generations of fishermen. Ari Shapiro/NPR hide caption 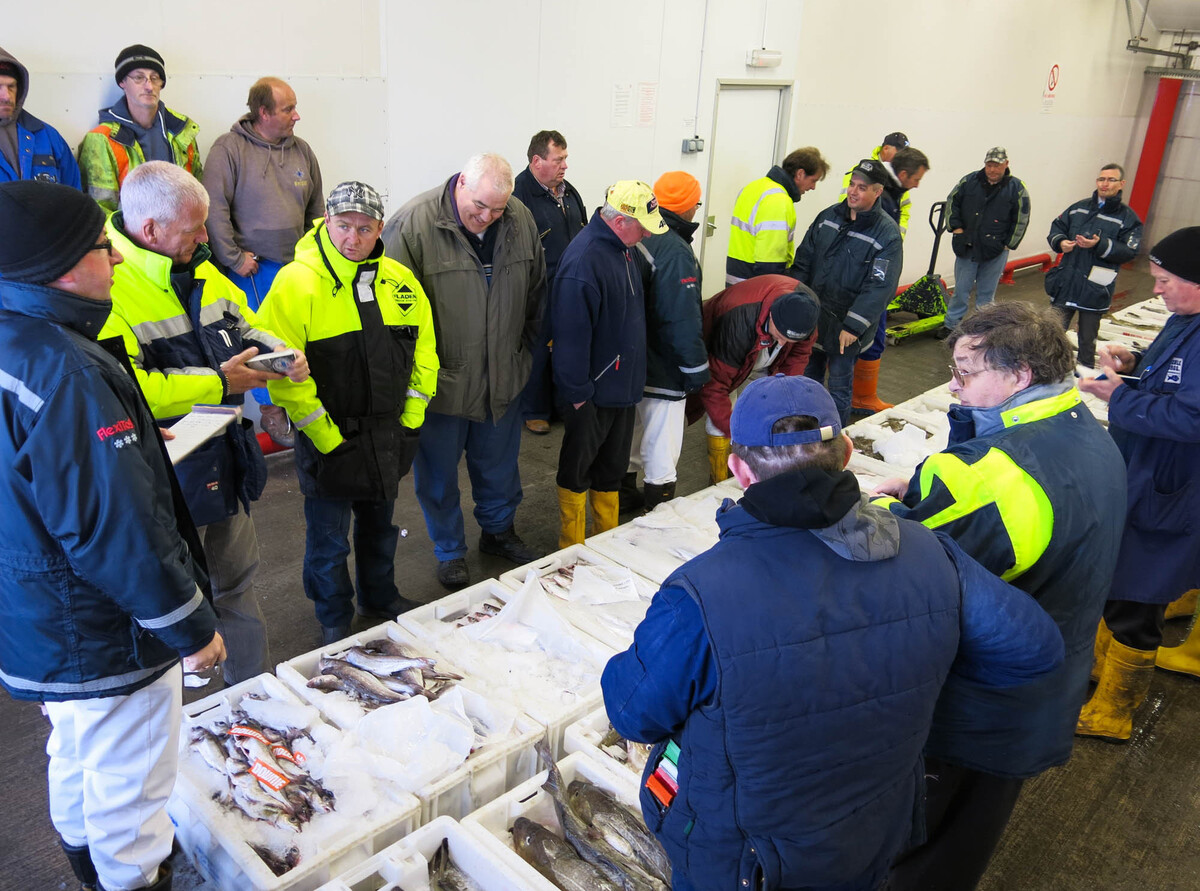 Most of the buyers and sellers at the Fraserburgh fish auction come from generations of fishermen.

It's not a perfect system.

Fishermen tell me they sometimes throw dead cod back in the water when they scoop them up with other fish. Otherwise, they'll be penalized for violating quotas.

In Fraserburgh, Mutch tells me he thinks this community can regulate itself. I note that some critics say that, if the industry is allowed to self-regulate, then every ship will be in a race to empty out the oceans. What does he think?

"I would've said 20 years ago, 15 years ago, possibly. But you've now got a breed of young fishermen who have gone through all the trauma that we've gone through. They realize that we can't do what we were doing before."

He says the new crop of fishermen has seen what their parents went through and realize they can't return to the old ways. And there is a new generation coming on board.

Xander West gave up fishing almost 20 years ago when the fishery started collapsing. But his son, he says, has now taken up trawling.

He says his son doesn't make a great living, but it's good enough. And he's just glad that his son can continue in the family business.