Accessibility links
Slavery, Famine And The Politics Of Pie: What Civil War Recipes Reveal : The Salt From recipes for apple pie without apples to advice on how to treat servants, the era's cookbooks hint at the turbulence outside the kitchen window. Indeed, food helped decide the war's outcome. 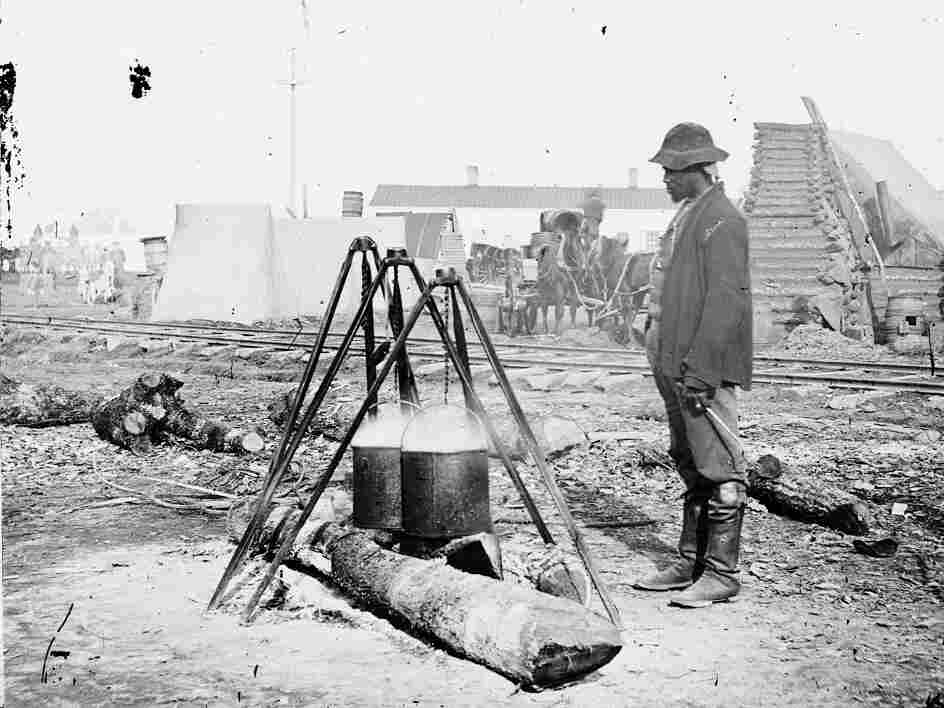 An African-American Army cook at work in City Point, Va., sometime between 1860 and 1865. Food played a critical role in determining the outcome of the Civil War. Library of Congress hide caption 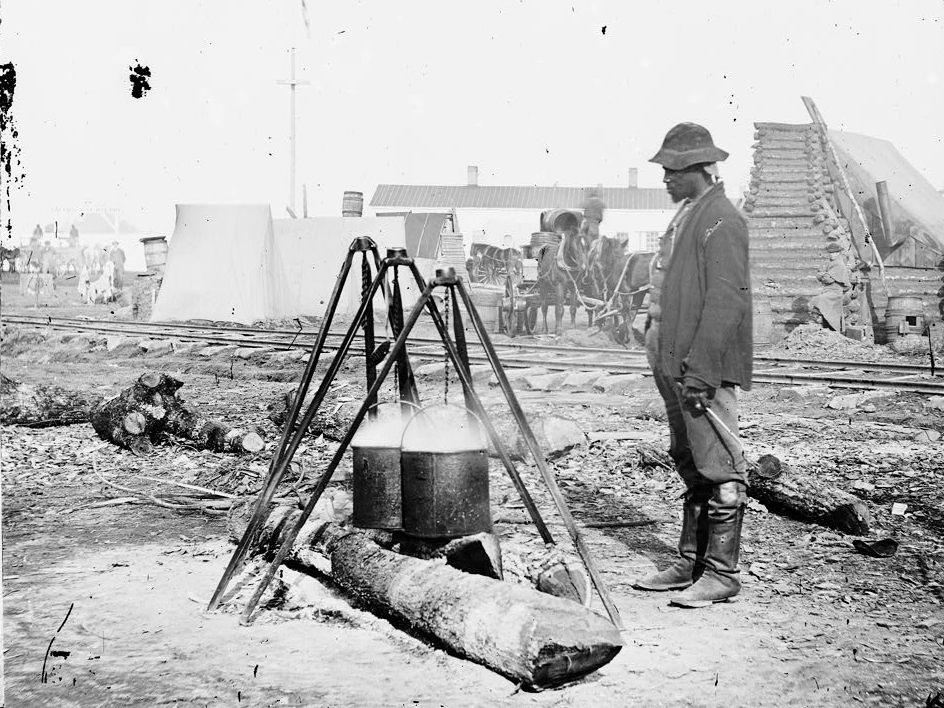 An African-American Army cook at work in City Point, Va., sometime between 1860 and 1865. Food played a critical role in determining the outcome of the Civil War.

On this June day in 1865, the last Confederate general surrendered to the Unionists, and the bloodiest war in the nation's history officially came to an end. It was a war in which food played a powerful role in determining the outcome.

Cookbooks published during the Civil War era provide vivid, contrasting portraits of how the conflict affected diets and social lives in the North and the South. A house divided against itself, indeed: There was very little in common between the kitchens of the Yankee North and the Confederate South.

Over the four-year course of the war, the cotton-and-tobacco-growing South was steadily starved into submission by the Union's naval blockade of the Atlantic Coast and the Mississippi River, which cut off vital supplies of grain, pork and, most lethally, salt. Meanwhile, ports in the North remained open to trade with Europe. While parts of the South came close to famine, the North continued to dine well and even exported surplus food. All this was reflected in the food literature of the time.

"Although direct references to the war were rare in Northern cookbooks," food historian Helen Zoe Veit told me, "a close reading can help us glean hints of the turbulence churning outside the kitchen window."

"There was only one actual cookbook published in the South during the war — but recipes were printed in other forms, especially in periodicals," says Veit, the editor of the American Food in History series, including the just published Food and the Civil War Era: The South.

A rare but explicit reference to slavery in a Northern cookbook appeared in Mrs. S.G. Knight's Tit-Bits; Or, How to Prepare a Nice Dish at a Moderate Expense. It contained a recipe called "Tessie's Wheaten Biscuit. (From a Contraband)" — contraband being the term used by the Army for slaves who had escaped across Union lines. 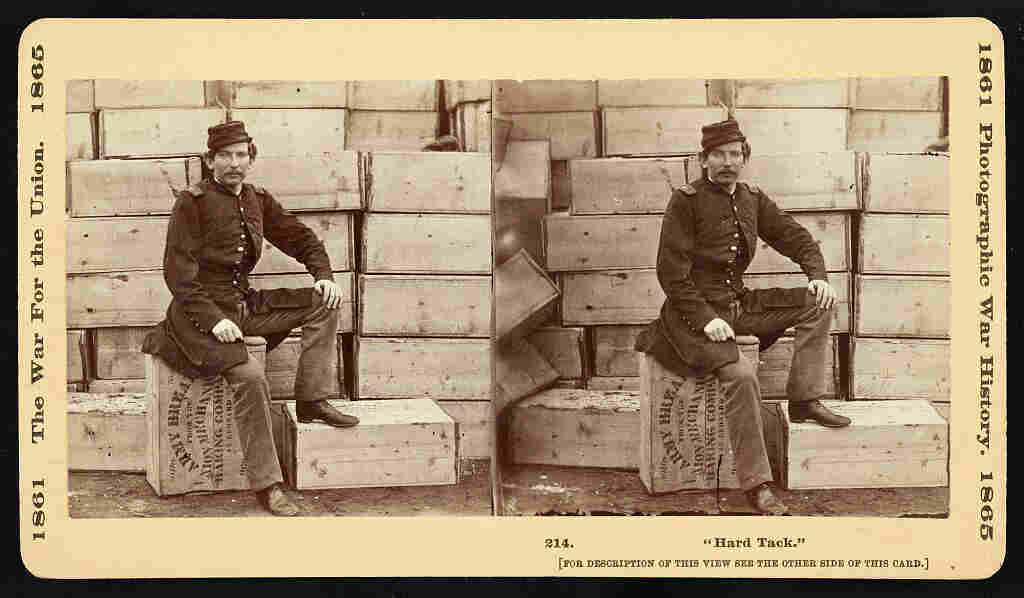 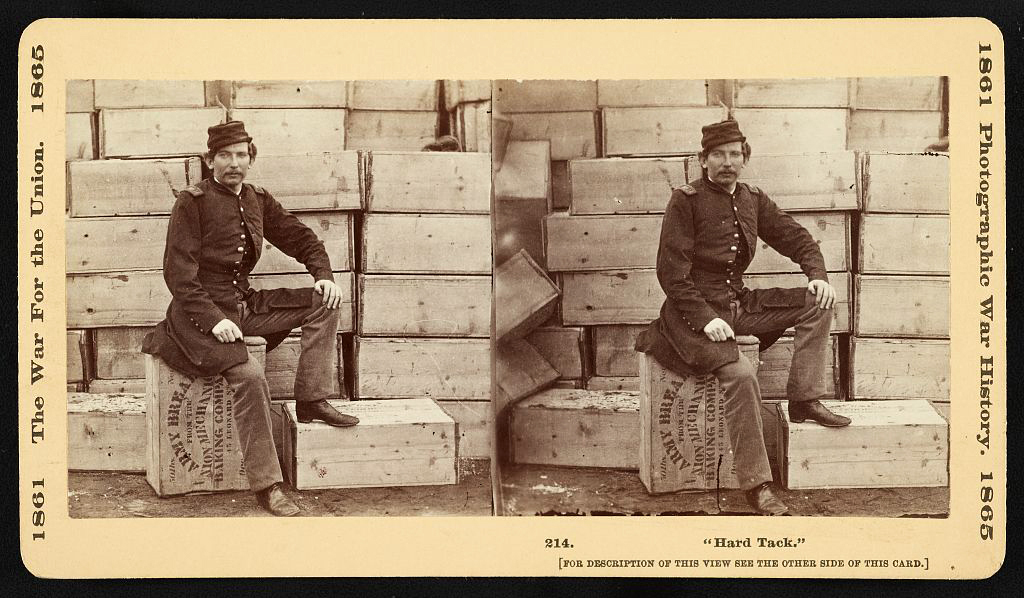 Written in broken English to mimic the speech of a slave, the short recipe used a touch of black comedy, unsavory to our modern ears, to evoke the cruelty of plantation life: It directed readers to "beat the dough 'till it begins to go pop, pop, pop, — it'll crack mos' like a whip, — then you know it's done."

Veit notes that while the other women in the book were referred to respectfully as Mrs. or Miss — such as Mrs. Faben's Economy Cakes or Miss Pindar's Dyspepsia Bread — contraband Tessie was denied that dignity.

Mrs. Knight's 1864 book also contained recipes for Yankee Pudding — no doubt a proud way of owning a term used pejoratively by Southerners for the enemy. And there was a rich and heavily spiced Thanksgiving Pudding, which was very up-to-the-minute, indeed: Only the previous year, President Abraham Lincoln had declared Thanksgiving a national holiday — to remind the people of the "blessings of fruitful fields and healthful skies" despite "the lamentable civil strife in which we are unavoidably engaged."

"Mary Cornelius' best-selling 1863 cookbook, The Young Housekeeper's Friend, opened with a homily on the humane treatment of servants. Reminding her Boston readers that their waiting-maid was 'made of flesh and blood, and was therefore capable of having an aching head and weary limbs,' Cornelius exhorted them to teach their illiterate servants to read."

While other cookbooks did not refer directly to slavery, its shadow was unmistakably present. For instance, Mary Cornelius' best-selling 1863 cookbook, The Young Housekeeper's Friend, opened with a homily on the humane treatment of servants. Reminding her Boston readers that their waiting-maid was "made of flesh and blood, and was therefore capable of having an aching head and weary limbs," Cornelius exhorted them to teach their illiterate servants to read. This sounds innocuous now but was deeply political then. Readers of the time, says Veit, would have been keenly aware that this advice "readily contrasted with the slave codes in Southern states that made it illegal to teach slaves to read."

As the war came to an end, America got its first cookbook dedicated solely to leftovers, or rechauffes, since even leftovers taste better in French. What to Do with the Cold Mutton: A book of Rechauffes, Together with Many Other Approved Recipes for the Kitchen of a Gentleman of Moderate Income, was published in the U.S. in 1865 and was well-received. Writes Veit, "Hundreds of thousands of Northern families had lost husbands, sons, or fathers, and in many cases that meant they had lost the basis of their economic subsistence. As many Americans knew all too well, turning the scraps left from one dinner into a palatable meal the next day could mean the difference between living within one's budgets and sliding into debt."

But though the North was undeniably affected by the war, its plight was nowhere as desperate as the South. While Northern cookbooks continued to call for exotic foreign ingredients like spices, cayenne, pineapple and chocolate for dishes like Calcutta Curry, Mulligatawny Soup and various souffles and ragouts, their Southern counterparts were teaching people how to cure bacon without salt.

The only Southern cookbook of the war years was The Confederate Receipt Book. Published in 1863, it had a revealing subtitle: "A Compilation of over one hundred receipts adapted to the times." And those were the worst of times, most miserably manifested in a recipe for Apple Pie without Apples: "To one small bowl of crackers that have been soaked until no hard parts remain, add one teaspoonful of tartaric acid, sweeten to your taste, add some butter, and a very little nutmeg."

Perhaps the most serious result of the food blockade was the lack of salt, which the South imported from Wales. Fish, meat, butter and other foodstuffs could not be preserved without salt and perished rapidly in the heat. The Army ran out of provisions, and on the home front, too, hunger grew. So severe was the salt famine, writes Andrew F. Smith in Starving the South, How the North Won the Civil War, that "Southern newspapers, journals, and books published dozens of recipes made with little salt." Eating tinned corned beef, which didn't need table salt, was encouraged. And those living near the coast began to cook their rice, grits and hominy in seawater.

Displaying admirable sang-froid, the Confederate Receipt Book assured its readers that they didn't need salt to preserve meat — after all, the Indians had managed without. All one had to do was erect open-topped, 5-foot-tall wigwams in the bright sunshine, build a fire within, and smoke thinly sliced meat over it for 24 hours to smoke-cure it.

Coffee, too, was scarce, so an ersatz brew made from roasted acorns mixed with bacon fat was prescribed for "a splendid cup of coffee."

What remained plentiful in the South were protein-rich peanuts and black-eyed peas, both of which, ironically enough, were brought from West Africa by the very slaves over whom the war was being fought.

Since slave women did most of the cooking in the antebellum mansions, it's scarcely surprising that one of the first cookbooks to be published by a black woman in America was by an ex-slave. Abby Fisher had moved from Mobile, Ala., to San Francisco in the 1870s and began to cook for society people there.

In 1881, What Mrs. Fisher Knows About Old Southern Cooking was published. Since neither the 49-year-old Mrs. Fisher nor her husband could read or write, nine friends collaborated to compile the book. With 160 Southern recipes for dishes like oyster gumbo, Hoppin' John and Jumberlie, it ranks as a classic in the American cookbook canon.