Accessibility links
Georgia's Giant Clay Pots Hold An 8,000-Year-Old Secret To Great Wine : The Salt Making ancient Georgian wine is pretty uncomplicated: Toss grapes into a huge, egg-shaped pot, bury it, walk away. What comes out is an orange wine with a deep tannin flavor prized around the world. 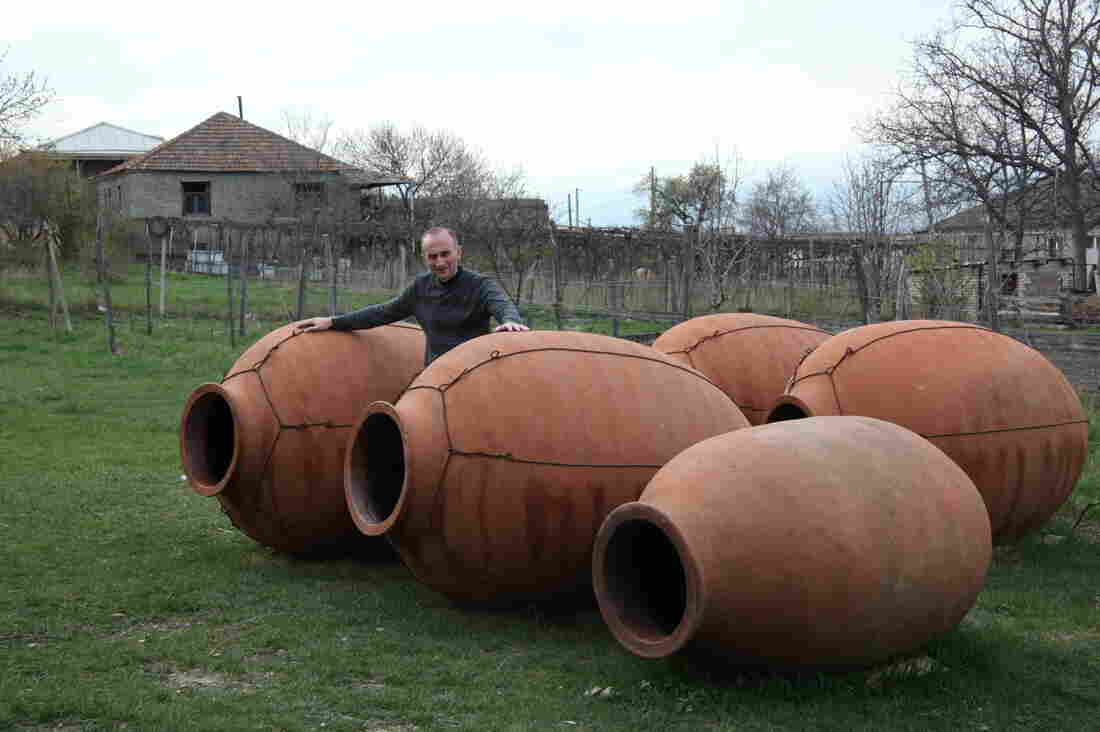 Winemaker Iago Bitarishvili makes wine in clay vessels called qvevri, which he buries underground and fills with white grapes. There are no barrels, vats or monitoring systems for this ancient Georgian method, which is helping drive sales. Bitarishvili plans to bury these new qvevri in his cellar to expand production. Daniella Cheslow for NPR hide caption 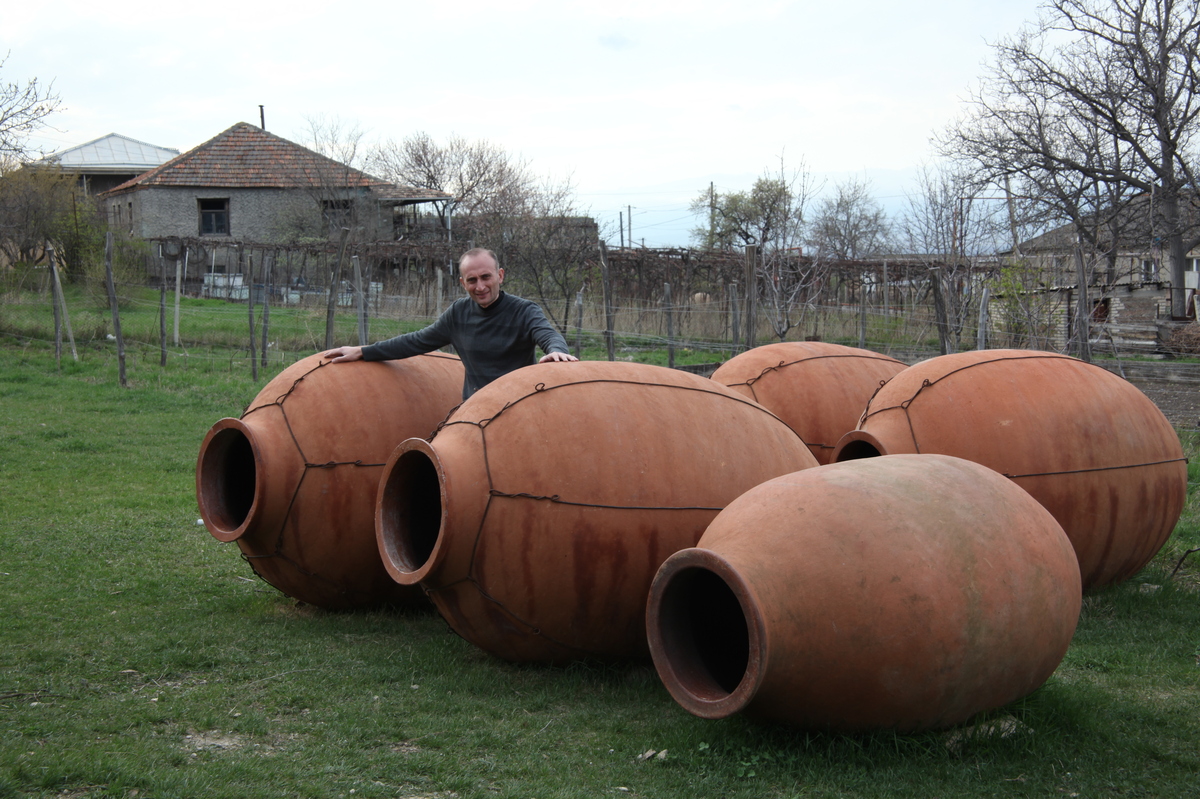 Winemaker Iago Bitarishvili makes wine in clay vessels called qvevri, which he buries underground and fills with white grapes. There are no barrels, vats or monitoring systems for this ancient Georgian method, which is helping drive sales. Bitarishvili plans to bury these new qvevri in his cellar to expand production.

When I ask Iago Bitarishvili to climb into his qvevri, a Georgian clay wine barrel, he rolls his eyes before he drops a ladder into what looks like a hole in the ground and makes his way down. What is a novelty to an observer is, to Bitarishvili, simply the way things are done.

"I don't make anything special," he says. "I only continue in the way started by my parents."

Georgia's winemaking heritage goes back 8,000 years and centers on the qvevri, a cavernous terra-cotta pot shaped like an egg, lined with beeswax and buried to the mouth underground. But these ancient vessels were sidelined by the industrial wine production dictated by seven decades of Soviet rule. Over the past 10 years, however, qvevri wine has slowly recovered. Today, it is a calling card for Georgian wine around the world.

Bitarishvili says making white wine in qvevri imparts a unique flavor. He pours organic white Chinuri grapes, skins and stems into the qvevri in October each year, lets them ferment with natural yeast for two weeks, and then seals the qvevri and leaves them buried underground for six months before lifting the lids in April. Finally, Bitarishvili transfers the wine to a smaller set of qvevri for a further half year of aging before bottling. There are no barrels, tanks or gauges — just the grapes and the qvevri.

In most commercial winemaking, only red wines are fermented with their skins. The extended skin contact gives Bitarishvili's white qvevri wine an orange tint and a deep tannin flavor that is prized by customers in Japan, Europe and the United States. Red qvevri wine is made through the same process. 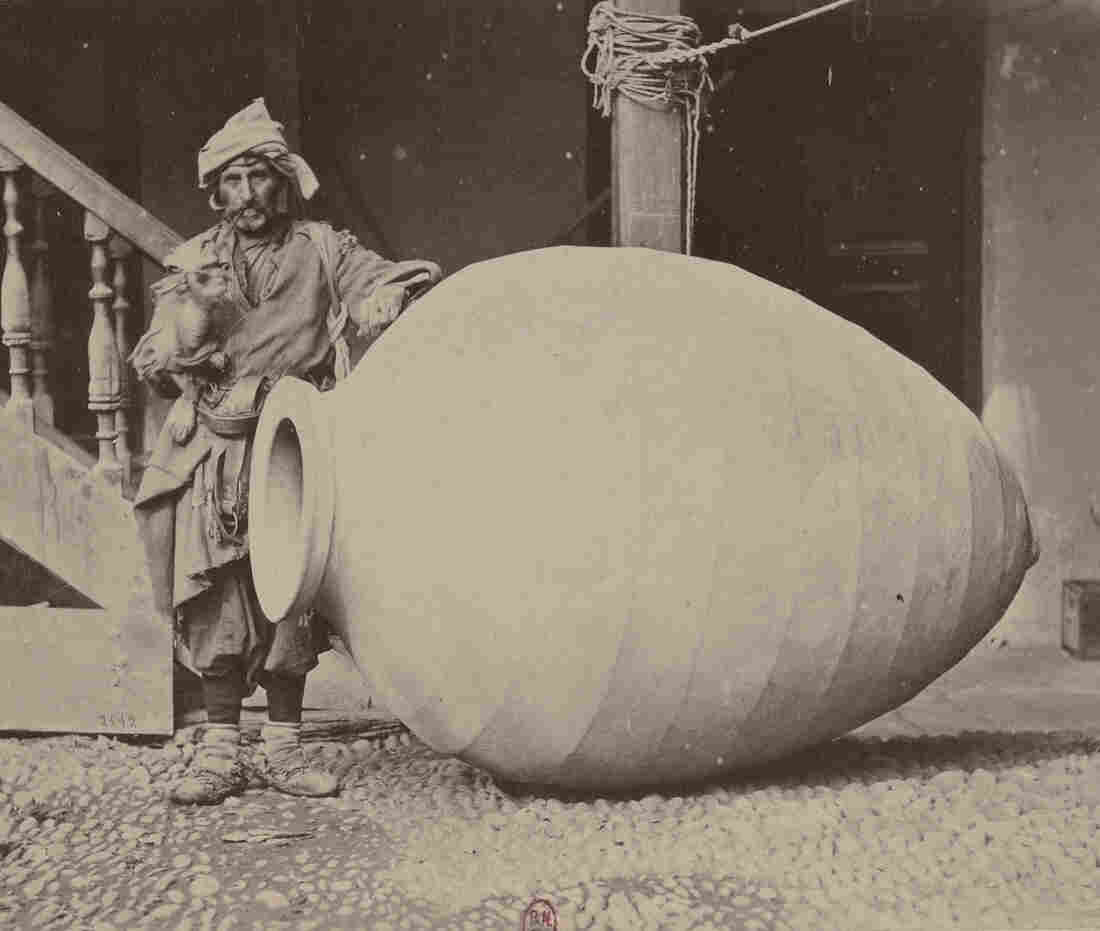 A man stands next to a giant qvevri pot in Kakheti, Georgia, in this photo from the late 1800s. The beeswax-lined vessels have been used to make wine for thousands of years. via Wikimedia hide caption 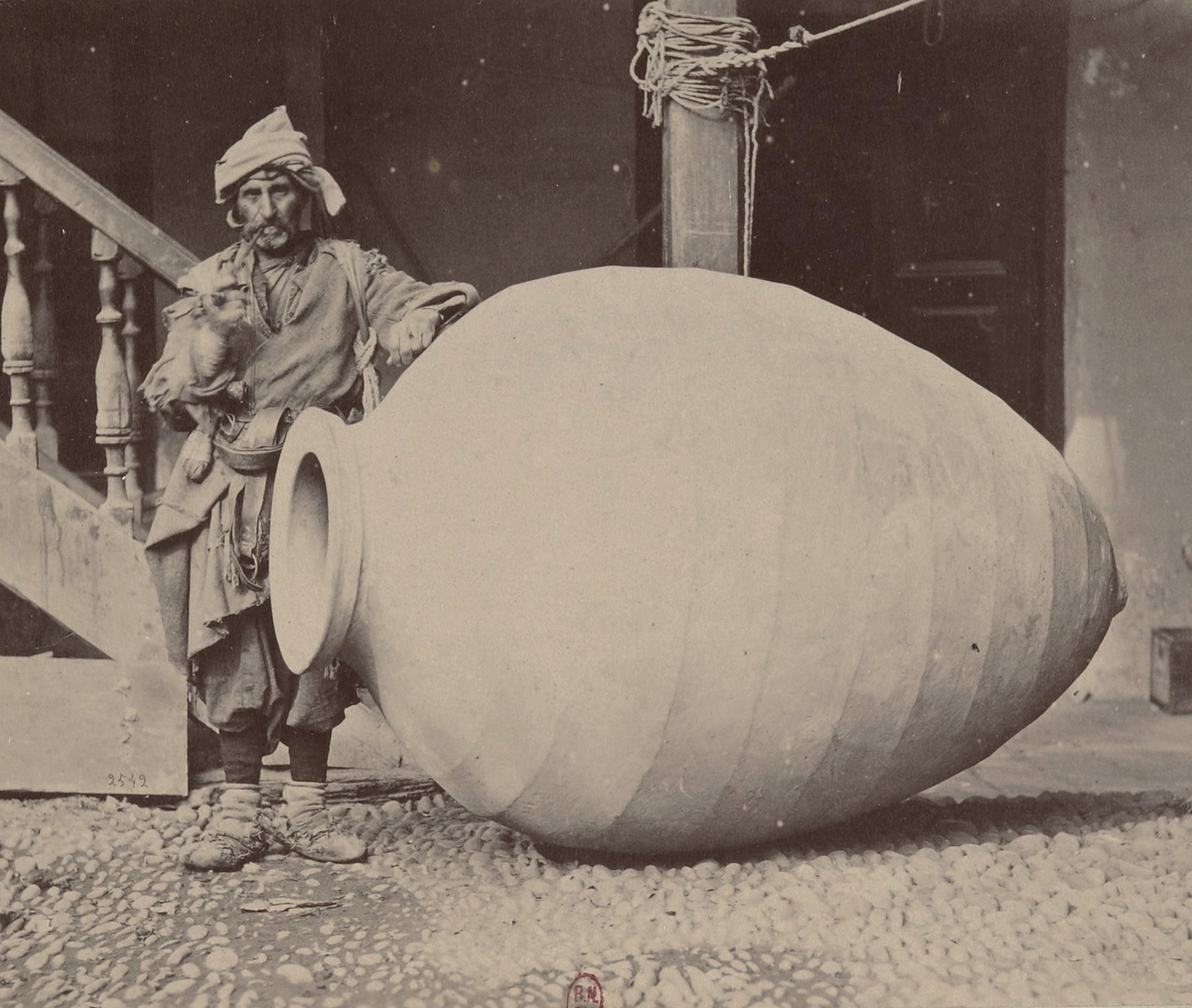 A man stands next to a giant qvevri pot in Kakheti, Georgia, in this photo from the late 1800s. The beeswax-lined vessels have been used to make wine for thousands of years.

Bitarishvili uses the same methods and even the same primitive wooden tools his parents and grandparents used, but for his forebears, qvevri wine was only a home craft.

That home craft was uprooted — literally — when the Soviets invaded Georgia in 1921. The Bolsheviks ripped up the hundreds of grape varieties grown on Georgia's many family vineyards. Instead, the communists planted just a handful of grape varietals and nationalized viniculture, churning out some 200 million liters of mediocre, mass-produced wine a year.

Ironically, the Russians who dismissed qvevri wine were also instrumental in restoring it. In 2006, the Georgian wine industry, already contracted after the fall of the Soviet Union, faced a grave threat when Vladimir Putin banned exports to Russia. Putin claimed it was to avoid rampant health violations in the Georgian wine industry; Georgians saw the move as punishment for drawing too close to the West.

Without the Russian market, the Georgian wine industry tanked — and then reinvented itself for a global clientele. At its nadir, Georgia produced 22 million liters in 2009. By 2014, that figure had quadrupled.

James Beard award-winning wine writer Alice Feiring, who is writing a book about skin contact in Georgian wine, says the qvevri has been a major engine for interest in Georgian viniculture. The first of two International Qvevri Wine Symposia was held in 2011 in the Alaverdi Monastery, a stone compound surrounded by vineyards at the foothills of the Caucasus Mountains, in Georgia's Kakheti wine-growing region. Feiring attended and was surprised to see that even the monastery, which has produced wine for 1,000 years, had used barrels for wine and was in the midst of switching back to qvevri.

"If you are a modern winemaker using barrels, you're racking the wine several times, moving it from one barrel to another," Feiring explains. "You're checking things, you're adding things to the fermentation, you're messing with the temperature. Qvevri winemaking allows the winemaker to be as uninvolved as possible. It's the way wine was made before any modern contraptions." 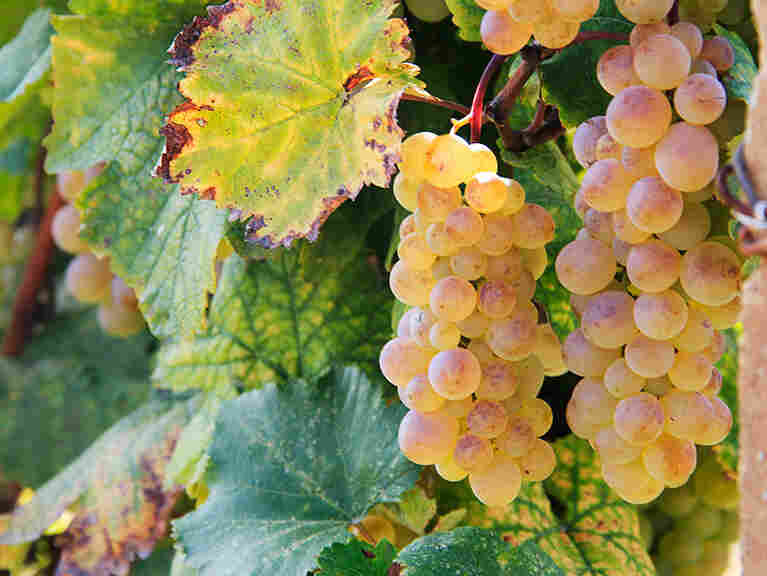 Grapes on the vine in Kakheti, Georgia's wine-growing region via Wikimedia hide caption 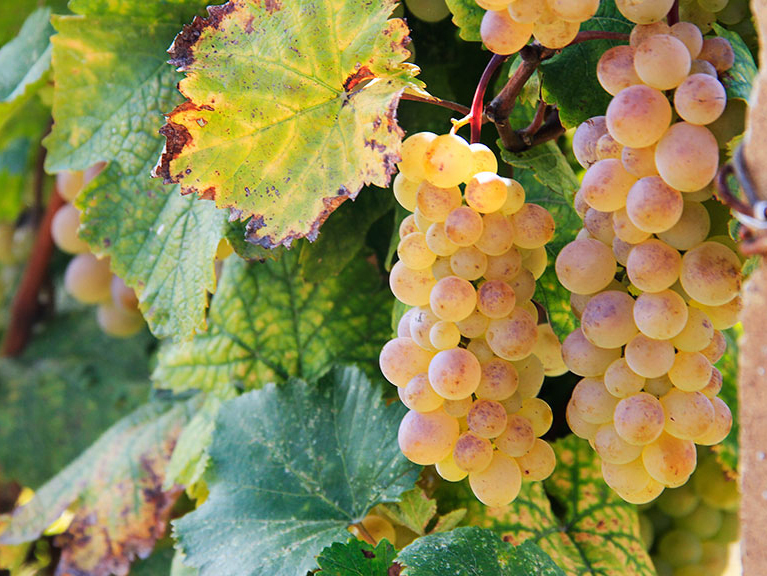 Grapes on the vine in Kakheti, Georgia's wine-growing region

Because qvevri are buried underground, the earth's temperature remains relatively constant, Feiring says. The qvevri's torpedo shape allows sediment to collect at the pointed bottom of the vessel, while the wine naturally moves around the middle.

Two years after the first symposium, UNESCO recognized qvevri as an element of "Intangible Cultural Heritage of Humanity."

"There's a lot of wine in Georgia made in barrels or in stainless steel," Feiring says. "But it really is the qvevri that put Georgian wine on the map for quality wine."

Russia ended its ban in 2013; today, Russia once again is Georgia's best customer, buying 60 percent of all wine exports. Yet the ban pushed Georgia to forge ties with far more foreign markets.

Irakli Cholobargia, marketing director of the state-run National Wine Agency, says qvevri wine is still a tiny portion — less than 1 percent — of the total Georgian output. Yet the number of qvevri winemakers is growing: Today at least 30 artisanal winemakers use the ancient vessels exclusively, and larger wineries are adding qvevri series to their lineups.

"To stand out from the crowd, it's good to have the qvevri wine. It's a different thing," Cholobargia says. But, he adds, increasingly, qvevri are not enough to differentiate a winery. "You have to have new grape varieties in your range, a new one even for the Georgians."

As for Bitarishvili, growing global interest has helped him expand his wine operation five-fold since 2006. Now he does not have enough wine to fill his orders.

"We'll produce maybe 8,000, maximum 10,000 bottles and that will be all," he says, while drumming his hands on five new qvevri lying on their sides like dinosaur eggs on his front lawn. "After 10,000 bottles, we would need to use some factory mechanics."

A previous version of this story misspelled Iago Bitarishvili's last name as Batarshvili.