Accessibility links
As American As Iced Tea: A Brief, Sometimes Boozy History : The Salt At least as early as Colonial times, Americans were drinking iced tea, though early alcohol-laden recipes had more in common with the cocktail from Long Island than the stuff sold by Lipton.

As American As Iced Tea: A Brief, Sometimes Boozy History

As American As Iced Tea: A Brief, Sometimes Boozy History 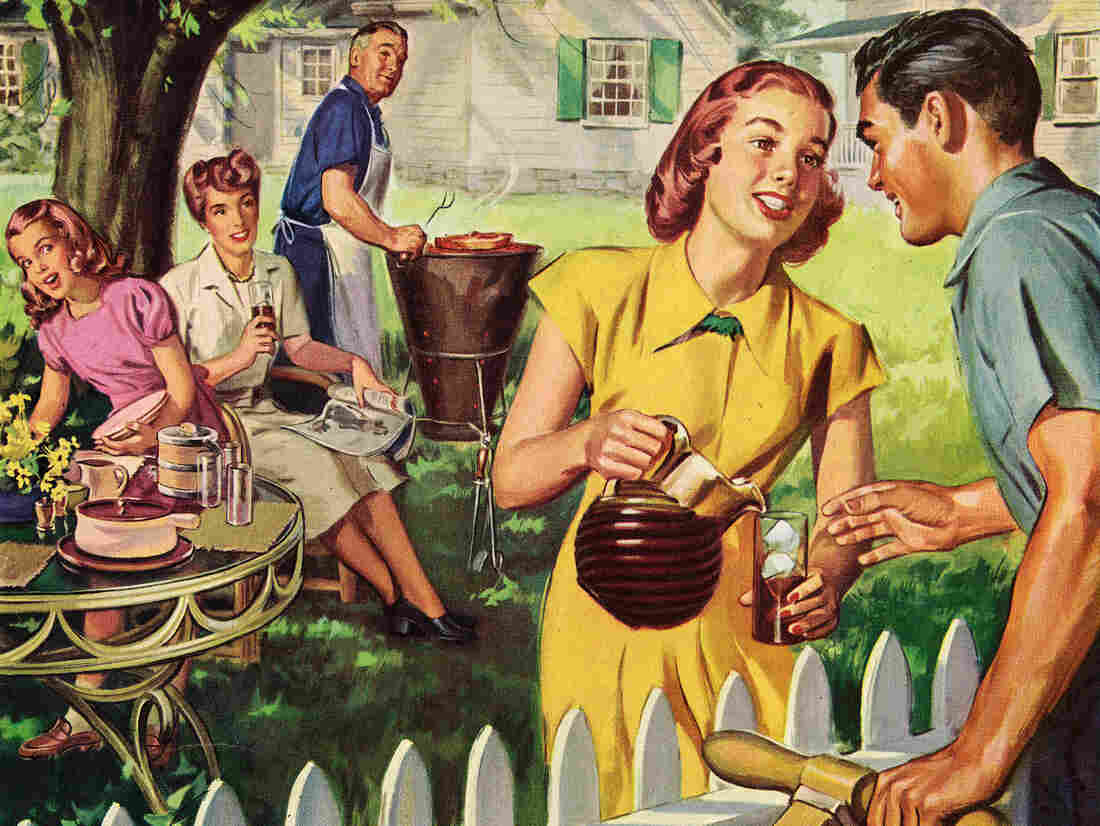 It makes sense that Americans would set aside a day to celebrate iced tea, if only unofficially: We popularized this summertime favorite. GraphicaArtis/Getty Images hide caption 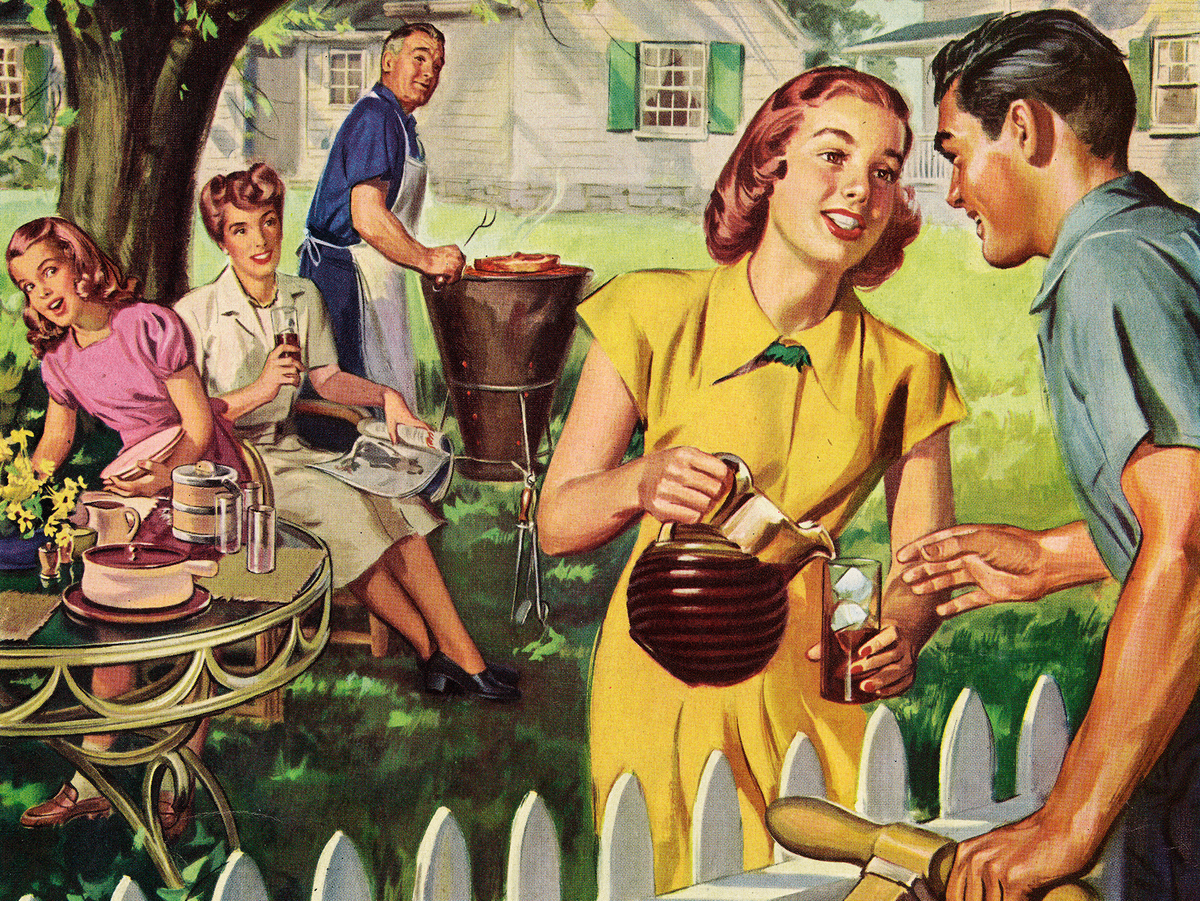 It makes sense that Americans would set aside a day to celebrate iced tea, if only unofficially: We popularized this summertime favorite.

You'd be forgiven for not knowing this, but Wednesday is National Iced Tea Day. And while it's only an unofficial food holiday, it makes sense that Americans would set aside a day to celebrate this favorite summertime sip: We popularized it.

Tea itself, of course, has been consumed in America since Colonial times. (Remember the Boston Tea Party?) But before you could drink iced tea, you needed ice — and that was a rare summer luxury until the early 1800s. New Englanders could cut large chunks of ice from frozen ponds and lakes in winter, then insulate it with sawdust so that it could last into the warmer months. But in the hot South, snow and ice didn't exactly abound.

A Vintage Cocktail That Packs A Punch

Then, around the turn of the 19th century, ice entrepreneurs from Northern U.S. states started shipping ice down to Southern states and the Caribbean. Americans would come to dominate the 19th century global ice trade. And there's good reason to believe plenty of that ice was being used to serve tea on the rocks.

Early recipes had more in common with the booze-laden Long Island iced tea* than the stuff Lipton sells. Indeed, Americans were drinking iced tea in the form of alcohol-drenched punches at least as far back as the Colonial era.

The classic Philadelphia Fish House Punch, first imbibed in the early 1700s, was often diluted with tea. In his book Punch, liquor historian David Wondrich writes that the recipe for Regent's Punch, dating to 1815, also packed quite the potent wallop: Not only did it call for green tea and arrack, a rumlike liquor from South Asia, it also threw in citrus juice, sugar, champagne, brandy and rum. No wonder, then, that one early drinker described the Regent's as imparting a "mad, delirious dizziness," as Wondrich writes. Overall, these strong, early punches had little in common with the light, fruity sippers served today. 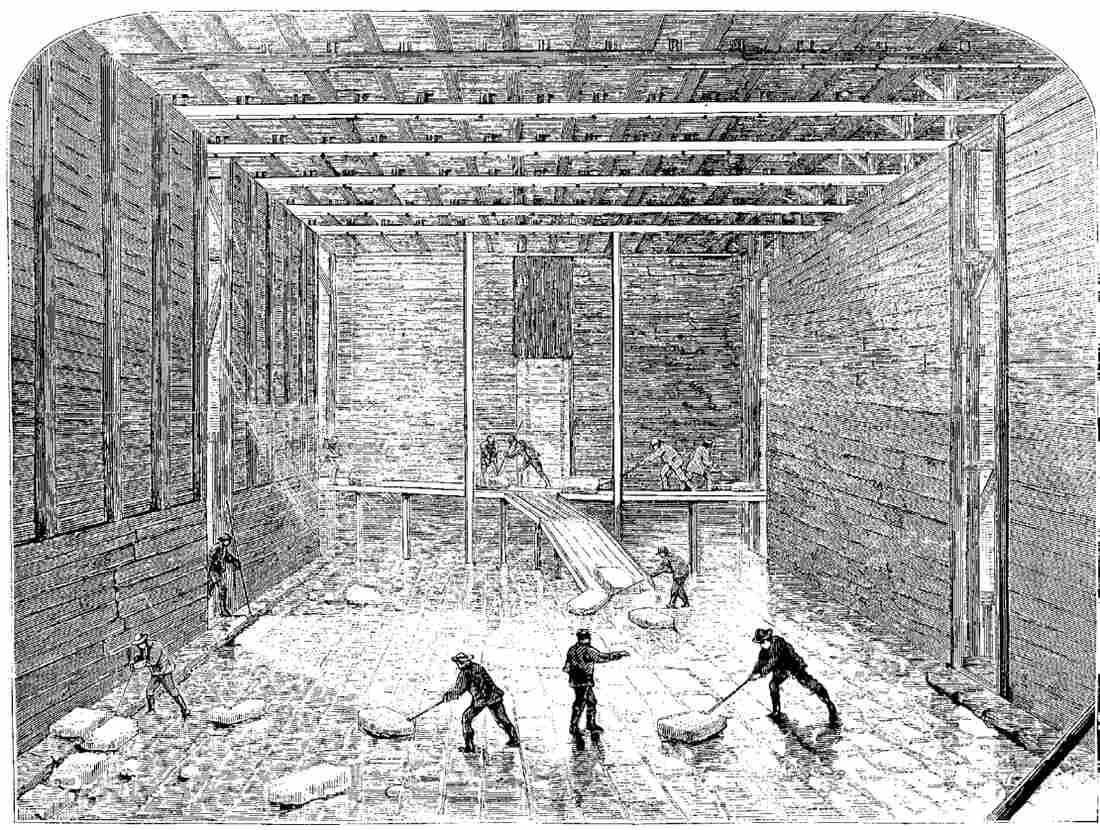 Ice being stacked at Barrytown, N.Y., 1871. You can't have iced tea without ice, and American entrepreneurs of the 19th century came to the rescue. Via Wikimedia hide caption 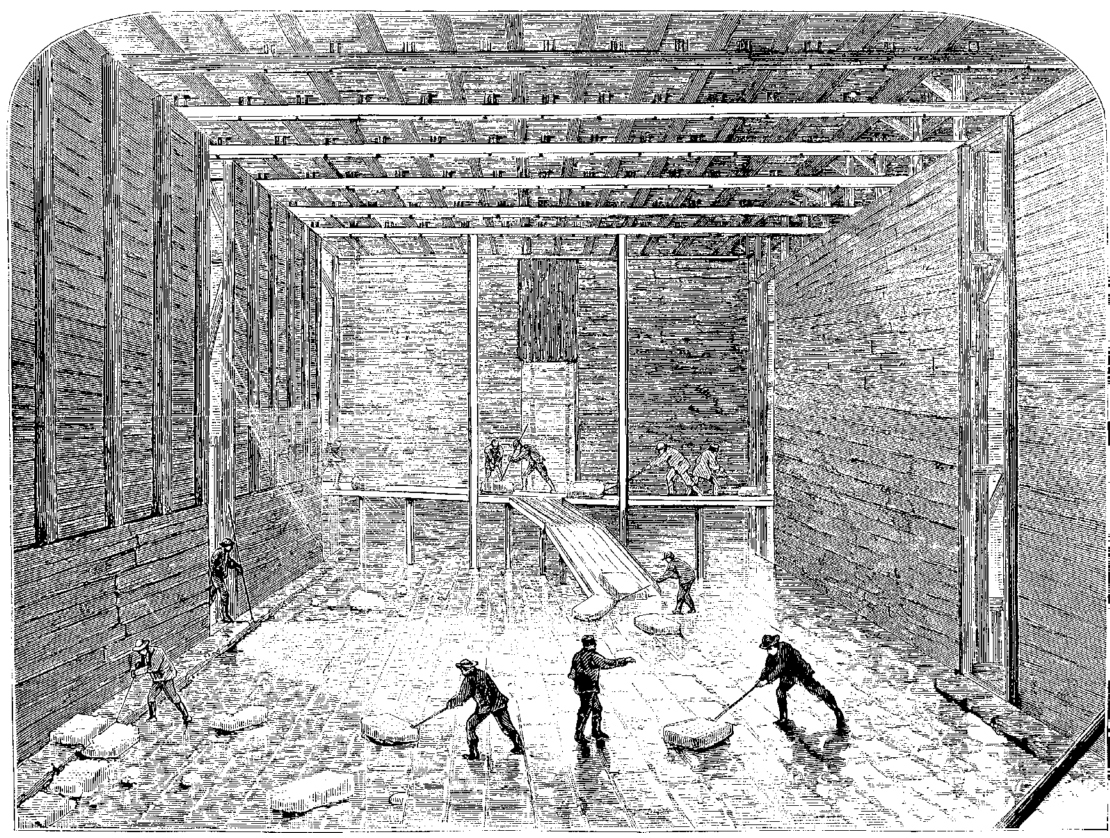 Ice being stacked at Barrytown, N.Y., 1871. You can't have iced tea without ice, and American entrepreneurs of the 19th century came to the rescue.

Recipes for nonalcoholic iced tea didn't appear in print until 1876 — when one was included in Estelle Woods Wilcox's Buckeye Cookbook. A few years later, a recipe for sweet tea — now a Southern staple — was published in the cookbook Housekeeping In Old Virginia, Linda Stradley writes on What's Cooking America.

But iced tea drinking habits really started to shift around the turn of the 20th century, when the nonalcoholic version was popularized at the 1904 World's Fair in St. Louis. Stradley writes that the hot summer weather caused fairgoers to ignore hot beverages in favor of cold ones — including iced tea. The fair's 20 million visitors cooled themselves with iced tea and brought the new style back to their homes throughout the United States and the world.

While Prohibition sounded a death knell for tea punches, it was a boon for nonalcoholic iced teas. A 1921 book on the coffee and tea industry notes, "Since Prohibition has gone into effect, tea has been drunk in places not heretofore thought of." Clubs and hotels looking for substitutes to hard liquor sales gravitated toward strong iced teas or virgin fruit punches — beverages with the bonus of being flavorful but legal. And when home refrigerators with freezers became available for the home market starting in the 1920s and '30s, people didn't even have to leave the house to grab a couple of ice cubes year-round.

Another advantage for iced tea? Tea leaves themselves had become more affordable.

As tea plantations took off in India and Ceylon, and countries in Africa started producing tea in the second half of the 19th century, the price of tea — once the product mainly of China — dropped considerably. The majority of the tea these countries produced was black, making it a more popular, economical choice.

Yet until World War II, American consumers were split almost equally between black and green tea consumption. As Marian Segal wrote in "Tea: a story of serendipity" for FDA Consumer magazine, the war cut off trade with China and Japan — the major suppliers of green tea — leaving Americans with British-supplied black teas from India. According to Segal, "Americans came out of the war drinking nearly 99 percent black tea." Seven decades later, black tea is still the preferred version here.

According to the Tea Association of the U.S.A., 85 percent of all tea consumed in the United States today is sipped cold. Whether you like your tea with a splash of liquor, poured into punches, or served simply on the rocks, you're taking part in a 200-year-old tradition with every sip.

*Funny enough, despite its name, the Long Island iced tea contains no tea — though it does taste like it.