Accessibility links
Like Us, Chimps Go Bananas For Booze : The Salt Scientists have spotted chimpanzees routinely sipping palm wine from trees in Guinea. The study supports a theory that our common relatives evolved the ability to digest alcohol millions of years ago. 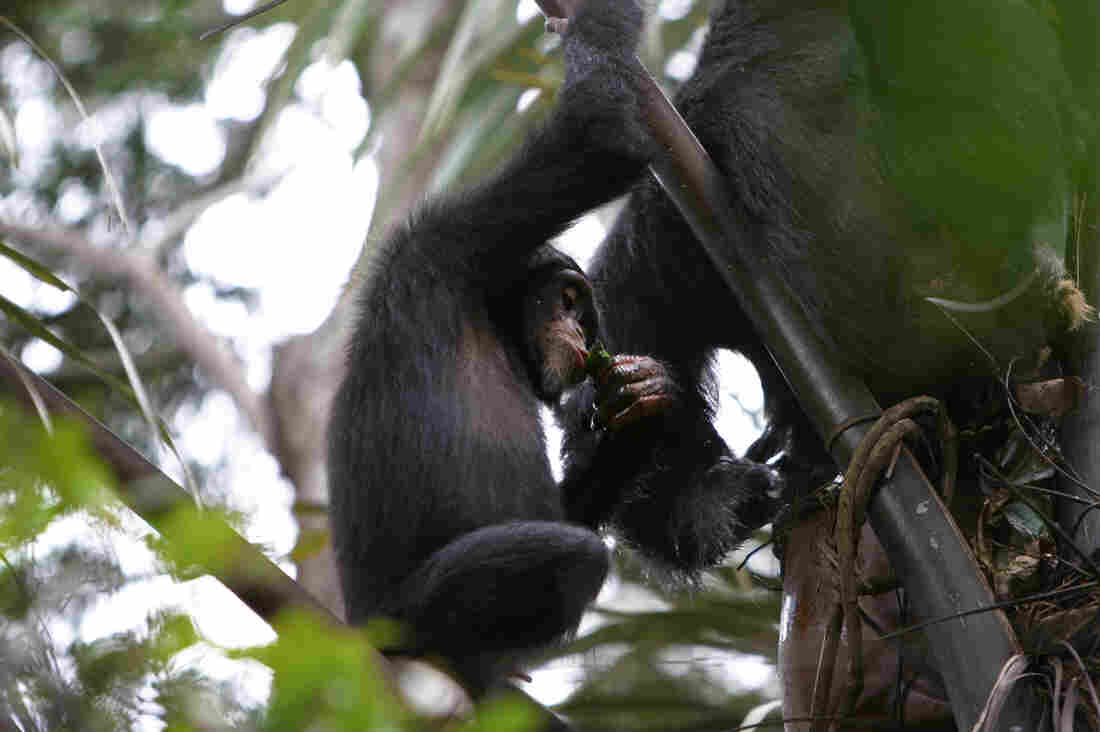 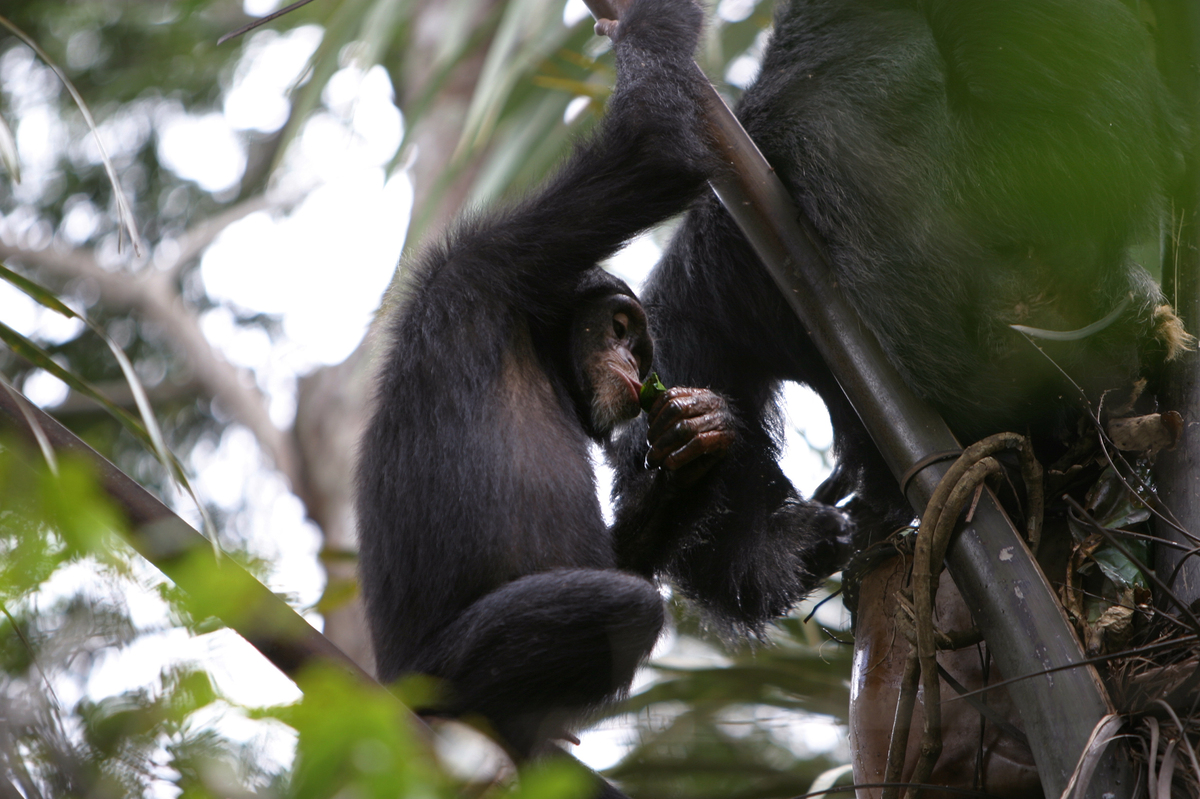 Chimpanzees are smart. They can master sign language, swimming and even cooking. Now, evidence shows they are using their smarts to sip wine.

Scientists spotted wild chimps guzzling wine not once, not twice, but 51 times over the course of a 17-year study in the village of Bossou in Guinea, according to research published Tuesday in Royal Society Open Science.

Here's how they do it.

The chimps hone in on raffia palms, a plant that produces a tree sap that naturally ferments into wine. Villagers in Bossou traditionally leave out containers in the morning at the crown of the trees for the sap to drip into throughout the day. When the coast is clear, the chimps periodically swoop in on the jugs.

An adult male chimpanzee named Foaf uses a leaf tool to drink raffia sap from a container. Holding the leaf tool, Foaf dips his hand into the fermented palm sap container and retrieves the soaked leaf. He then transfers it to his mouth to drink the palm sap it's carrying.

They start by gathering a leaf and folding it into a scoop-like tool. Then it's time to dip the leaf in and drink, the study notes. In video recordings of the events, adult chimps hastily swigged the cocktail, averaging about nine dips per minute. Adolescents took part in the shenanigans, too, averaging 9.7 dips per minute.

Anthropologist Kimberley Hockings of Oxford Brookes University led the study. She says the findings prove that apes — at least in the community studied — are not averse to ethanol; they can even make a habit out of "happy hour."

The research team is cautious to conclude whether the chimps are drinking the raffia wine to get a buzz or just because they like the sweet taste. To find that out, they say you'd have to do an experiment comparing chimpanzees' preference for non-fermented versus fermented palm sap.

Hockings says the study also didn't yield much insight on whether the chimps actually got drunk from the wine. However, in some of the incidents the scientists observed, the apes consumed large enough quantities of sap to influence their behavior.

"On one occasion that I observed, the chimpanzees rested immediately after drinking the palm wine, which struck us at the time as a likely effect of the [drink]," Hockings writes in an email to The Salt. "Although it's tricky to conclude it was because of the ethanol."

Other scientists who've studied wild apes say their intake of alcohol is rare, but not unheard of.

Green monkeys have been caught boozing it up on St. Kitts, a Caribbean island packed with beach resorts. There, the Old World monkeys are frequently spotted snagging vacationers' cocktails and then stumbling about.

Chimps Are No Chumps: Give Them An Oven, They'll Learn To Cook

But these latest findings are some of the most detailed yet, according to Robert Dudley, an physiologist at the University of California, Berkeley, and author of The Drunken Monkey: Why We Drink and Abuse Alcohol.

"This is a comprehensive assessment of a frequent occurrence that involves not one, or two, but many perpetrators," says Dudley, who was not involved with the study. "It's super important to document anything going on with the great apes, particularly something related to modern human behaviors."

Dudley thinks the study goes beyond proving chimps like to monkey around; it bolsters the idea that human attraction to alcohol is not recent, but deep within our roots.

The findings from Guinea specifically support the hypothesis that the ancestors of modern humans evolved the ability to digest ethanol a long, long time ago, he says. The theory goes that our ability to digest ethanol arose during our transition from the trees to the ground when we needed to obtain energy from fermented fruits that had fallen to the floor, not just ripe fruits on tree limbs.

Richard Wrangham, a primatologist at Harvard University, disagrees with the theory, saying there is consistent evidence that primates avoid fermented, ethanol-rich rotting fruits.

He argues that ethanol in rotting fruits is not the equivalent of ethanol in beer.

"Chimps have long been known to drink ethanol in human fermented productions," he tells The Salt in an email. "So the big question is, 'What's the difference?' "

The study authors say we may get more answers once additional research is conducted on chimps and how they forage for foods containing ethanol.