Accessibility links
Why Is This Fisherman Selling Threatened Bluefin Tuna For $2.99 A Pound? : The Salt That low price doesn't reflect the true state of Pacific bluefin: Scientists say it's in deep trouble. But fishermen who catch it say they're just trying to make a living — and obeying the law.

Why Is This Fisherman Selling Threatened Bluefin Tuna For $2.99 A Pound?

Why Is This Fisherman Selling Threatened Bluefin Tuna For $2.99 A Pound? 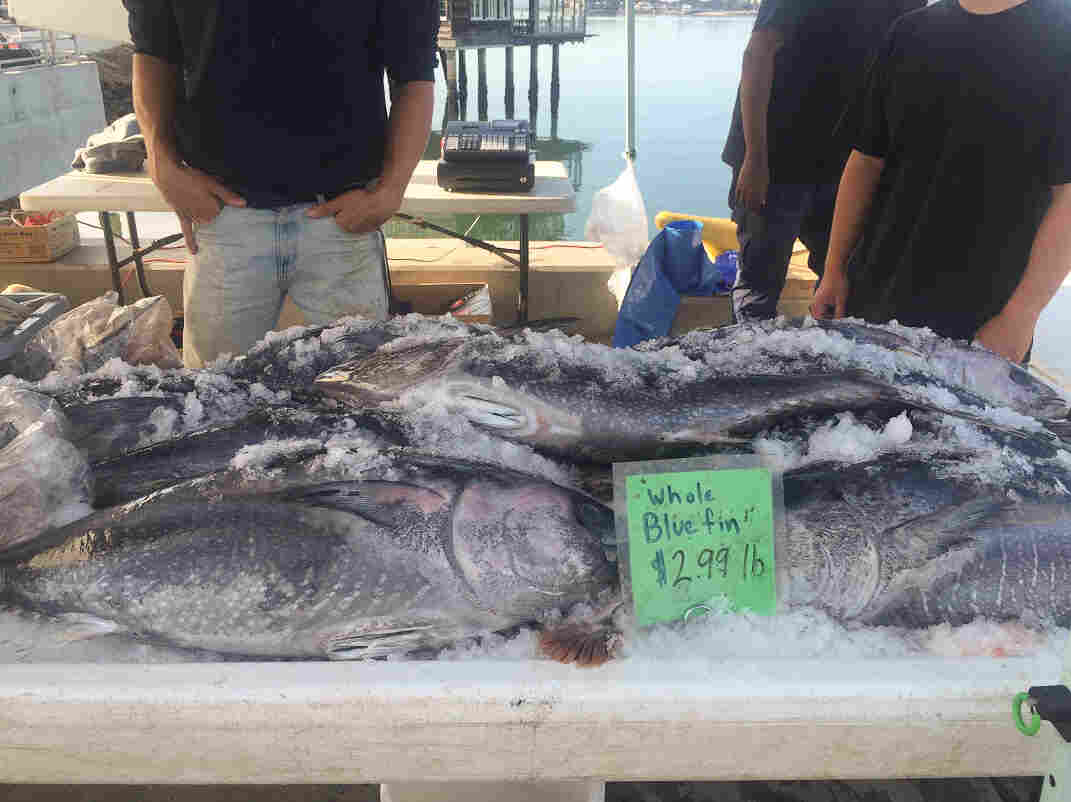 Pacific bluefin tuna for sale for $2.99 per pound at the fish market in San Diego. That shockingly low price does not reflect the deeply threatened state of the bluefin population. Clare Leschin-Hoar for NPR hide caption 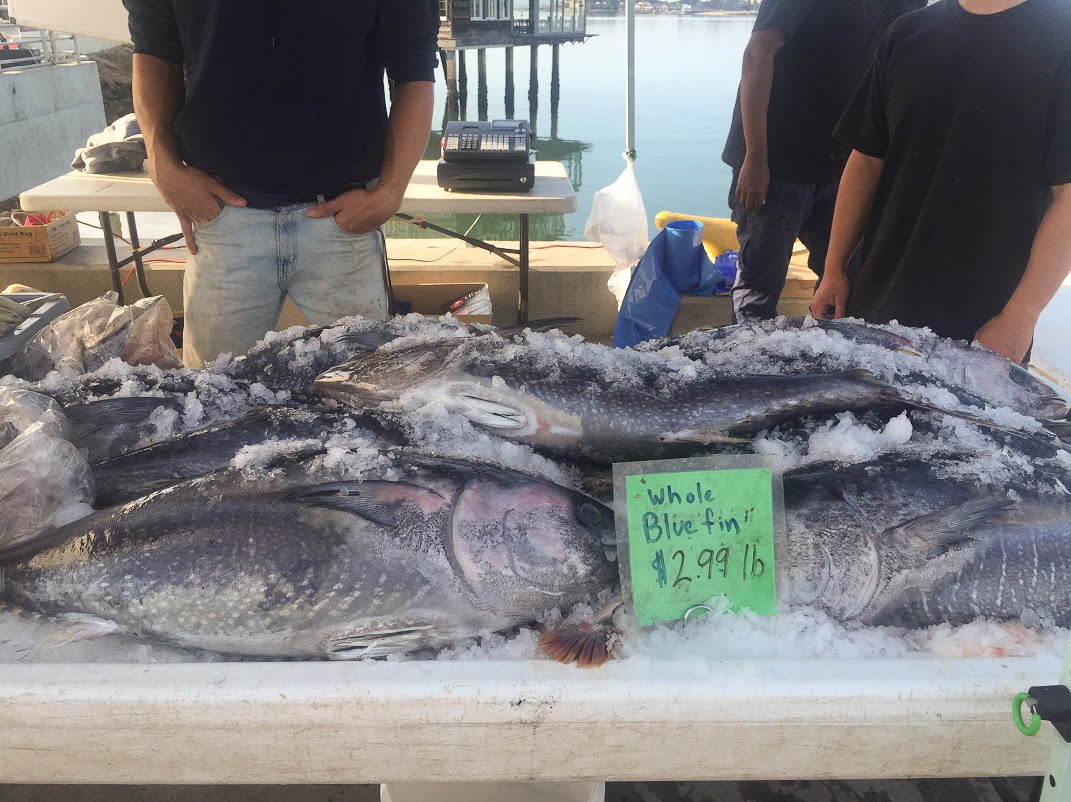 Pacific bluefin tuna for sale for $2.99 per pound at the fish market in San Diego. That shockingly low price does not reflect the deeply threatened state of the bluefin population.

Twenty minutes before the San Diego Tuna Harbor Dockside Market was set to open, the line was 75 people deep and starting to curl past the pier. The crowd here last Saturday didn't come for the local sand dabs or trap-caught black cod. They were bargain hunters looking to score freshly caught, whole Pacific bluefin tuna for the unbelievably low price of only $2.99 a pound.

That's less per pound for this fish — a delicacy prized for its fatty flesh, whose numbers are rapidly dwindling — than the cost of sliced turkey meat at a supermarket deli.

It's a low price that doesn't reflect the true state of Pacific bluefin: Scientists and environmentalists say the species is in deep trouble. According to population estimates, stocks of Pacific bluefin tuna are at historic lows, down 96 percent from the levels they'd be at if they weren't fished.

But commercial fishermen like David Haworth, who brought this pile of small, steely gray bluefin to market, say that assessment doesn't match up with what they're seeing in the water: a record-smashing abundance of Pacific bluefin tuna.

"Our spotter pilots that have been fishing with us for up to 40 years here say they're seeing the most bluefin they've ever seen in their lifetimes, and our government is not documenting any of it," says Haworth.

Haworth, 52, is the last purse-seine tuna fisherman in San Diego — a city once heralded as the tuna capital of the world. Making a living isn't easy for commercial fishermen like Haworth. For much of the year he fishes for squid, but El Nino patterns have changed fishery patterns, making squid harder to find. And forget about the sardine fishery — crashing stocks have triggered its closure until 2016.

At the same time, warmer ocean conditions have brought an abundance of bluefin tuna into the region, shifting Haworth's focus.

Historically, he says, "there was never really a quota on bluefin, and we could go out and catch plenty and sell them. Or we could catch sardines, or mackerel, so we'd have something to do when [ocean] conditions changed" or when the species that Haworth depended on for his income became less reliable. "Now, we're just so restricted."

Bluefin tuna has long been listed as a species to "avoid" by influential groups like the Monterey Bay Aquarium's Seafood Watch program. It's a warning that many seem to have taken to heart. And it means the higher prices fishermen like Haworth used to count on for bluefin are no longer a sure thing.

Haworth says wholesalers who used to clamor for his bluefin now pass on it, preferring yellowfin tuna instead. Supermarkets and chefs that once eagerly purchased bluefin have pledged not to carry it. Fellow San Diego fisherman Tory Becker tried to sell some of Haworth's bluefin tuna at a local farmers market last week and was publicly scolded by a customer. 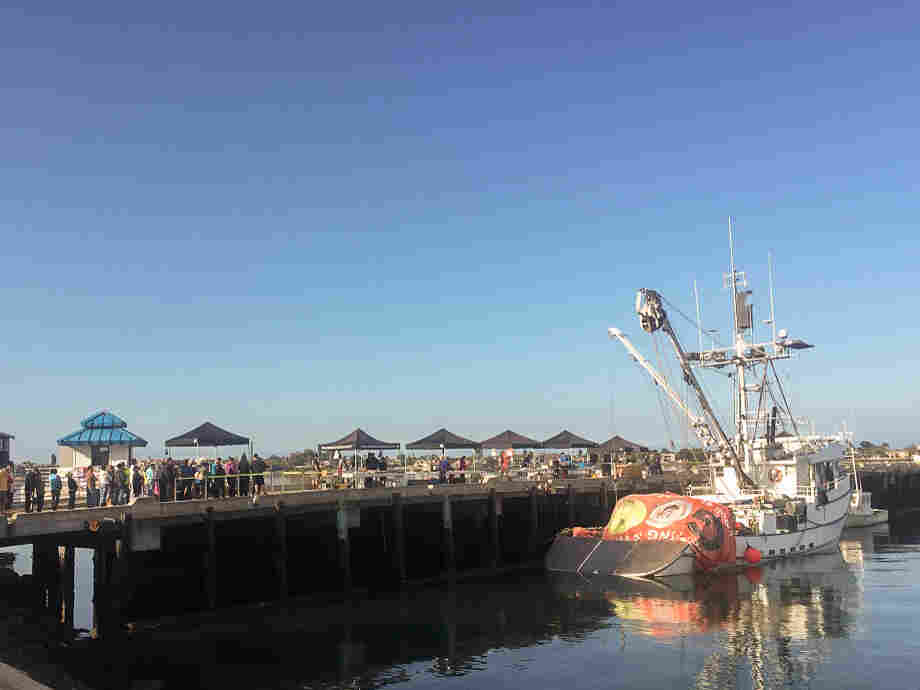 A long line of people queued up to buy Pacific bluefin for the bargain price of $2.99 per pound last Saturday at the San Diego Tuna Harbor Dockside Market. Clare Leschin-Hoar for NPR hide caption 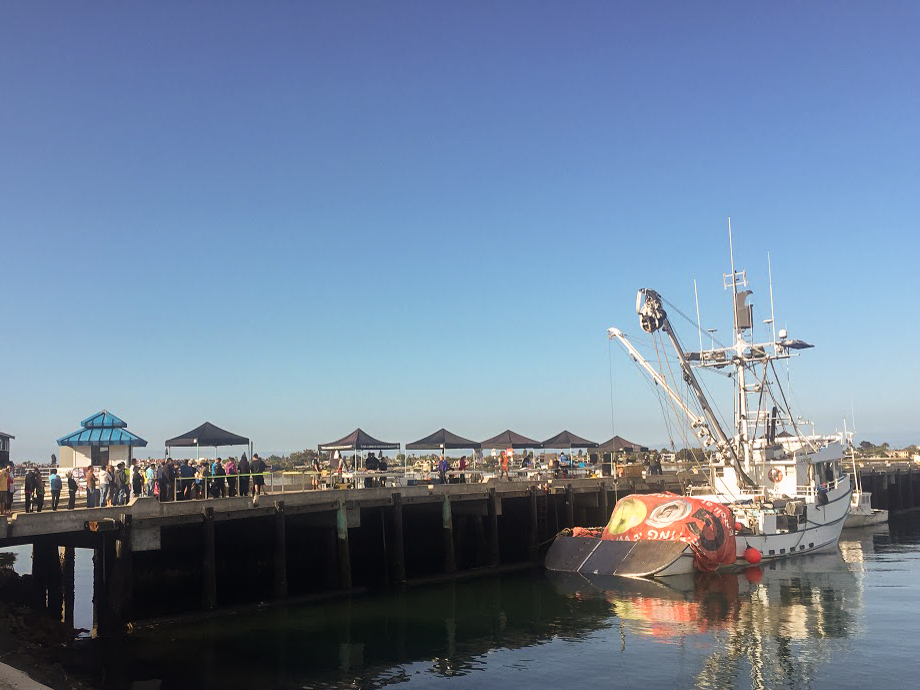 A long line of people queued up to buy Pacific bluefin for the bargain price of $2.99 per pound last Saturday at the San Diego Tuna Harbor Dockside Market.

Haworth says that the buyer he had originally lined up for his haul backed out of the sale, then later offered him a mere $1-$2 a pound — too low for him to break even. Instead, he took his catch and headed for San Diego's fledgling fishers market to sell directly to local foodies.

"If you have a 30-pound fish, and you're selling it to a consumer for $2.99 a pound, it's $90 for one fish. I was trying to get to the price point where we're going to make decent money, but one where every family could come down and grab a fish if they want one," says Haworth.

But the bounty of bluefin that California fishermen like Haworth report seeing is not what it seems, scientists say.

"It's a very difficult task to count animals as elusive as tuna," says Craig Heberer, the West Coast regional coordinator for recreational fisheries for NOAA Fisheries. "The increase in the number of bluefin spotted by Southern California fishermen likely [reflects] a change in the percentage of migrating fish, not the overall population numbers."

Pacific bluefin off the coast of California and Mexico aren't counted in current stock assessments. That's because spawning grounds for Pacific bluefin are located in the western Pacific Ocean, near Japan. Some, but not all, of those fish then migrate to the U.S. West Coast and Mexico to feed. Counting them where they spawn, rather than where only a portion of them migrate, is how regulators say they get the most accurate information.

The migration to the U.S. side of the Pacific happens when bluefin are between 1 and 3 years old, which also explains why the tuna Haworth caught were so small — just 20 to 30 pounds each. They're technically still juveniles that haven't had the opportunity to reproduce and help replenish bluefin numbers. Mature Pacific bluefin can reach 1,200 pounds, and don't typically reproduce until they're closer to 5 years old. By that point, they would have already migrated back to their spawning grounds on the other side of the Pacific.

Theresa Sinicrope Talley, a coastal specialist with the Scripps Institution of Oceanography in San Diego, says local fishermen like Haworth are simply catching what's plentiful and pricing it to local demand.

"They're trying to make this business work. They're aware," she says. "They don't want to harm the environment, either — their livelihood depends upon it." 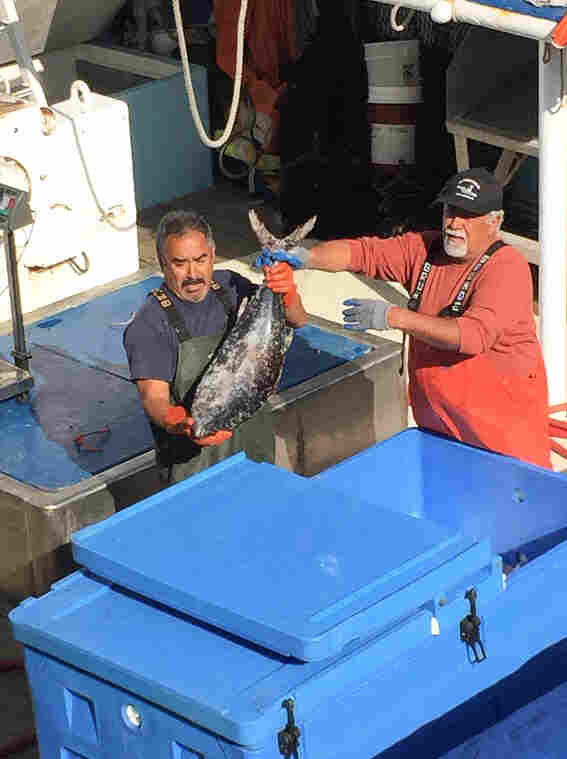 Workers get more bluefin tuna from the deck of the Barbara H., David Haworth's vessel, to bring up on the dock for sale. Clare Leschin-Hoar for NPR hide caption

"From their perspective," she says, "they're abiding by the law."

In recent years, Haworth and other commercial fisherman in the U.S. have seen the amount of bluefin they're allowed to catch slashed drastically as part of international agreements. Bluefin were once reliably lucrative for Haworth, but the cuts have affected his ability to make a living, he says. And he feels strongly that in the larger scheme of things, the amount of bluefin he catches is so small, it doesn't negatively impact global stocks.

"Mexico now has a quota of 6,000 metric tons of fish over two years," he notes, while the quota for U.S. commercial fishermen is just a tenth of that. "How could our 600 metric tons not be sustainable, when you think about it in the picture of the whole world? We're only catching 600 tons," says Haworth.

Haworth says he often feels villainized by environmental groups for fishing for this vulnerable species. But not everyone blames small fishermen like him for declining stock levels. Some are pointing the finger at the very organizations that oversee bluefin fisheries and set the world's catch limits.

Andre Boustany, a research scientist and bluefin expert at Duke University, faults the agencies that manage the fishery for failing to conduct a full assessment of Pacific bluefin stock until 2012 — "well after massive damage had already been done."

"While Pacific bluefin tuna are not currently listed as endangered in the U.S., that could change if the stock maintains its current trajectory. And I say that as a scientist that is most definitely not an alarmist," Boustany says.

"We would disagree that the quotas, as they are currently set, are sustainable," says Jamie Gibbon, a tuna expert with Pew.

But there's still hope for the Pacific bluefin — and for fishermen like Haworth. For years its cousin, the Atlantic bluefin, was also experiencing rapidly declining stocks, garnering lots of headlines and hand-wringing. All that attention now seems to be paying off: This year, for the first time since 2006, stocks are healthy enough that catch quotas were actually increased by 20 percent. Gibbon says it's not too late for the Pacific bluefin, either.

"This is a population that can recover, and can recover in a relatively short amount of time," he says.