Accessibility links
Washington Berry Pickers Push For Elusive Union Contract : The Salt Only about 2 percent of farm workers in the county are part of a union, and few have successfully negotiated contracts with farms. Workers at the Sakuma Brothers Farm are trying for both. 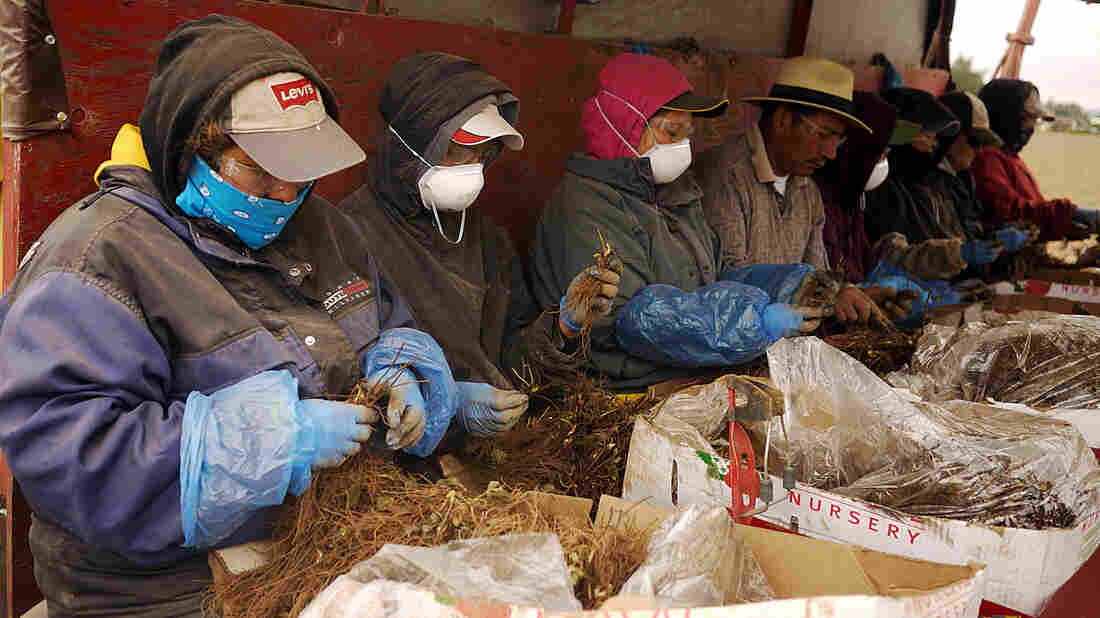 Workers sort through strawberry roots on a planter pulled behind a tractor at Sakuma Brothers Farm in Burlington, Wash. Liz Jones/KUOW hide caption 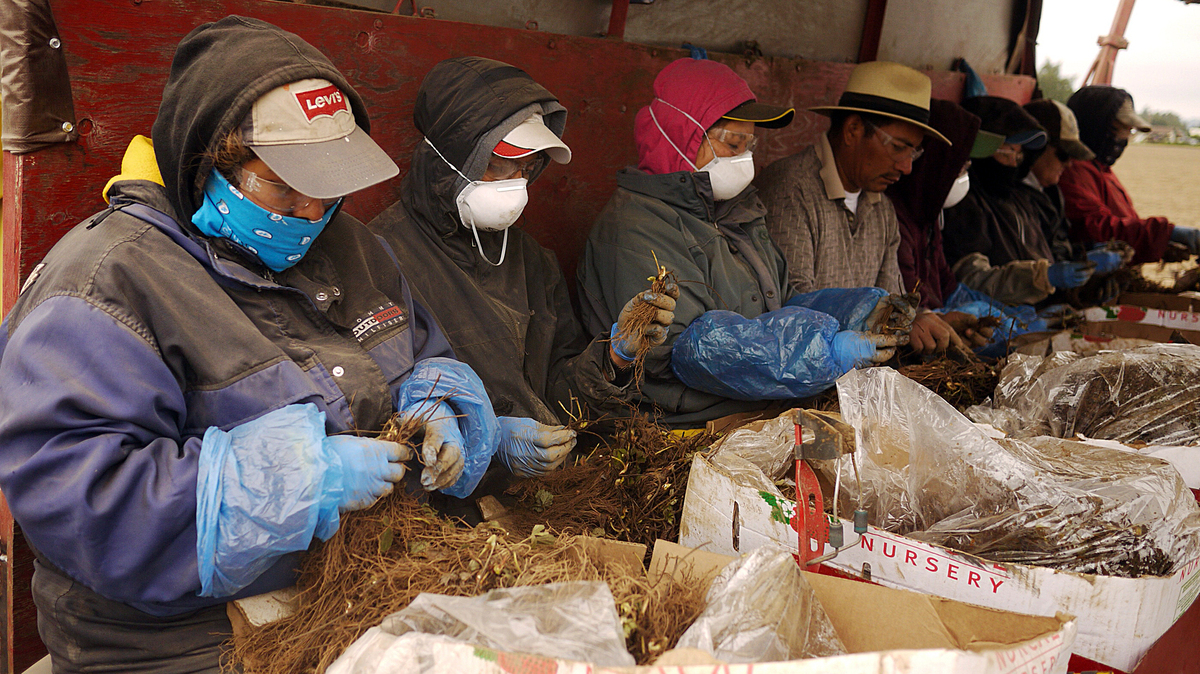 Workers sort through strawberry roots on a planter pulled behind a tractor at Sakuma Brothers Farm in Burlington, Wash.

On a recent morning at Sakuma Brothers Farm, eight Latino workers sat on a bench seat behind a tractor, planting strawberry roots that will bear fruit in a few years. Dust masks and goggles covered their faces.

Sakuma Brothers runs fruit operations in Washington state and in California, selling berries to top brands like Driscoll's, Haagen-Dazs and Yoplait. The four-generation family farm is an institution in this part of the state.

But the farm lately has faced lawsuits, worker strikes and consumer boycotts, which have largely yielded victories for its workers. The disputes have caught the attention of farm owners and labor groups across the county. And a pending Washington State Supreme Court ruling on how Sakuma handles rest breaks could prompt farm workers to bring similar lawsuits against their employers elsewhere.

Some workers at Sakuma Brothers say that what's needed is a union contract. They're asking for a legally binding agreement on wages, and for a flat rate of $15 per hour for all harvesters, instead of the current system that pays workers by the pound for how much they pick — what's called a piece rate.

Why Picking Your Berries For $8,000 A Year Hurts A Lot

They also want the contract to define a grievance system, medical coverage and payment of transportation costs for seasonal workers who migrate every year from California.

"We have families that have worked 10 to 11 years for Sakuma. Season after season, the same families come back to work here," Torres says. Those families want to keep working here – but with a guarantee of fair conditions and wages, he says.

Rosalinda Guillen, a longtime labor organizer, grew up in these fields and has helped Torres's group push for a contract.

The labor unrest flared up a few years back, when, for the first time, Sakuma brought in guest workers through the federal H-2A visa program. Local workers claimed the foreign crew displaced them and was paid better. The company disagreed. But the relationship became fraught, and longtime workers said they wanted to lock in some job security. 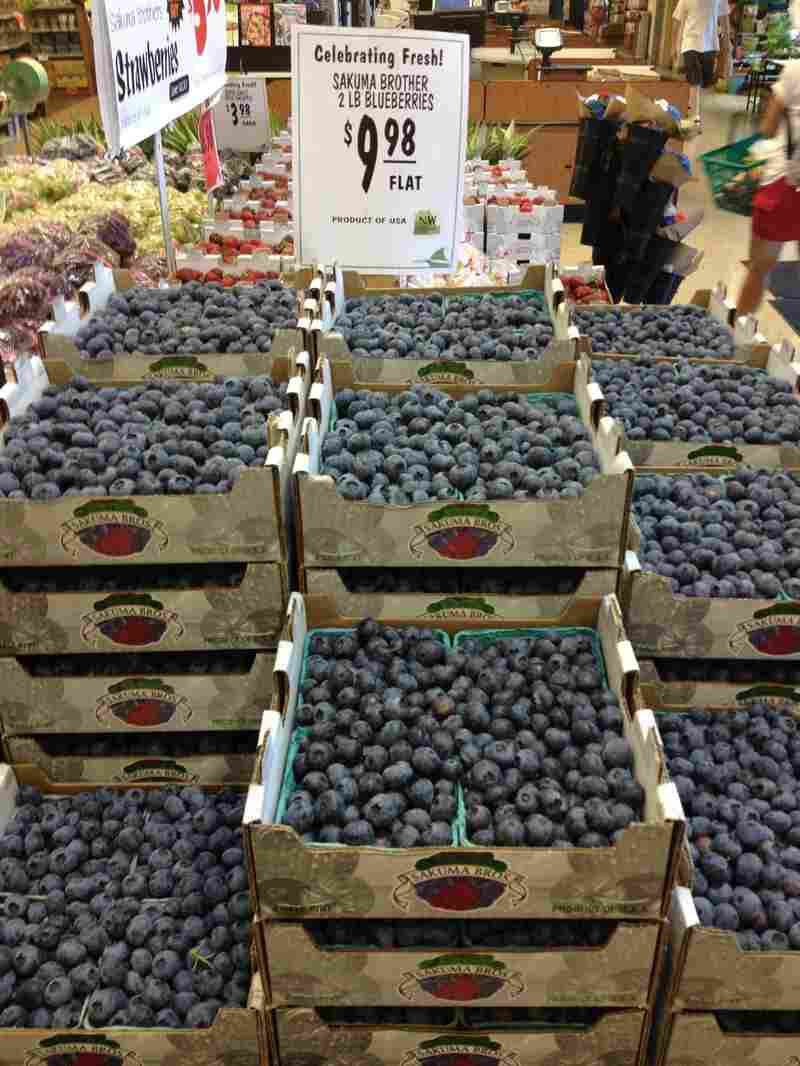 Flats of blueberries from Sakuma Brothers Farms are seen at Ballard Market in Seattle in 2013. Liz Jones/KUOW hide caption

"This company has ruined a lot of the trust and the goodwill that they used to have," Guillen said. "In order to build trust with workers again, they have to sign a union contract."

Historically, farm worker contracts are difficult to achieve. Only about 2 percent of farm workers in the county are part of a union. California is the only major farm state that offers a legal framework for this type of union to operate. Which means that Familias Unidas in Washington state is charting an unusual path.

Torres and Guillen say they're hopeful Sakuma will eventually come around.

"They say that they are a good neighbor and have been here as part of the Skagit Valley for five to six generations," Guillen says. "So have we."

Danny Weeden, Sakuma's new CEO, has inherited this labor dispute at Sakuma and says he's heard the workers' message. As the first non-Sakuma ever at the helm, he's one of the biggest changes at the farm this season. He came on to help the company at a turbulent time.

They fired some managers and intensified training workshops. They added new benefits, including a housing stipend for workers who don't live on the farm. They also plan to bring in more mobile health clinics and expand recreational programs. And – here's the big one – they revamped how field workers get paid.

Weeden said Sakuma will still pay based on production, but more than before. Everyone will earn at least $10 an hour; faster berry pickers could make up to $27 an hour. They will also now pay for rest breaks, which is an issue in yet another pending court decision.

"Our most valued resource on our farm are our people and our workers," Weeden says. "So that's why our mantra is caring and compliance. That's what's going to get us for the long-term success of this company."

Legal action prompted some of these changes. A federal class-action lawsuit forced Sakuma to pay out workers who said the farm shorted their wages. That settlement last year cost $850,000 and marked a rare win for farm labor. Familias Unidas has also won legal victories on claims that Sakuma retaliated against them in the company housing and in hiring practices.

As for the union, Weeden appears uninterested in further talks. He said that hit a dead end. And he says he believes the company is headed in a good direction.

Walking through the berry fields, Weeden and other managers say they rely heavily on the bilingual supervisors to help with worker issues. But they aim to get more directly involved, too.

On the walk, Rich Brim, company vice president, pulls out his phone.

"We believe in caring and compliance," he says, parroting a company mantra.

"I'll practice that one," Brim says. "And that's a guarantee."

Liz Jones is a reporter for NPR member station KUOW in Seattle. A version of this story first appeared on KUOW's website.