Accessibility links
To Tackle Food Waste, Big Grocery Chain Will Sell Produce Rejects : The Salt If fruits and vegetables don't measure up to cosmetic standards, they're often plowed under in the field. One company wants to help change that by creating a market for less-than-perfect produce.

It's easy to blame someone else for food waste. If this is really a $2.6 trillion issue, as the United Nations estimates, then who's in charge of fixing it?

Turns out, we the eaters play a big role here.

When we shop with our eyeballs in the produce aisle, our expectations for perfection contribute to the problem.

We've come to expect a dazzling array of eye candy with beautiful displays of cosmetically perfect fruits and vegetables.

But, of course, nature serves up much more variation.

And now, a big grocery chain in the West called Raley's is taking a swing at the food waste problem by trying to get customers to embrace the differences.

Raley's announced Tuesday it will begin selling less-than-perfect fruits and vegetables in July.

But let's go back to where it all begins: the farm. As part of a collaboration with PBS NewsHour, we hit the fields of Salinas Valley, Calif., for a reality check.

In a cauliflower field, we found lots of slightly yellow heads of cauliflower.

"You see how it just has that yellow tinge to it?" Art Barrientos of Ocean Mist Farms points out. "This is not marketable."

There's nothing wrong with these heads of cauliflower. The yellow tint comes from sun exposure. It's crunchy and every bit as nutritious as white cauliflower.

"But this just doesn't meet our standards," Barrientos says as we give it a taste.

The marketplace demands white, blemish-free, perfectly sized heads. So, these heads are plowed under. 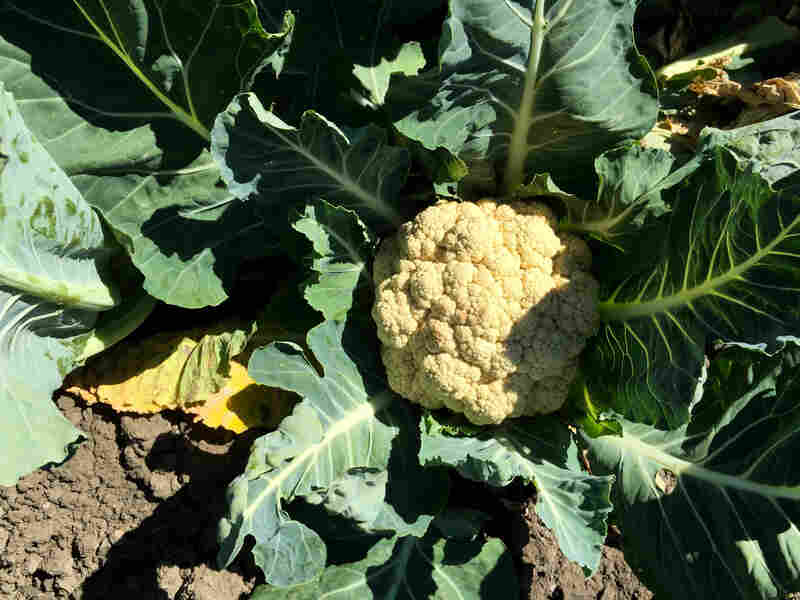 The yellow tint on this cauliflower comes from sun exposure. It's crunchy and every bit as nutritious as white cauliflower. Allison Aubrey/NPR hide caption 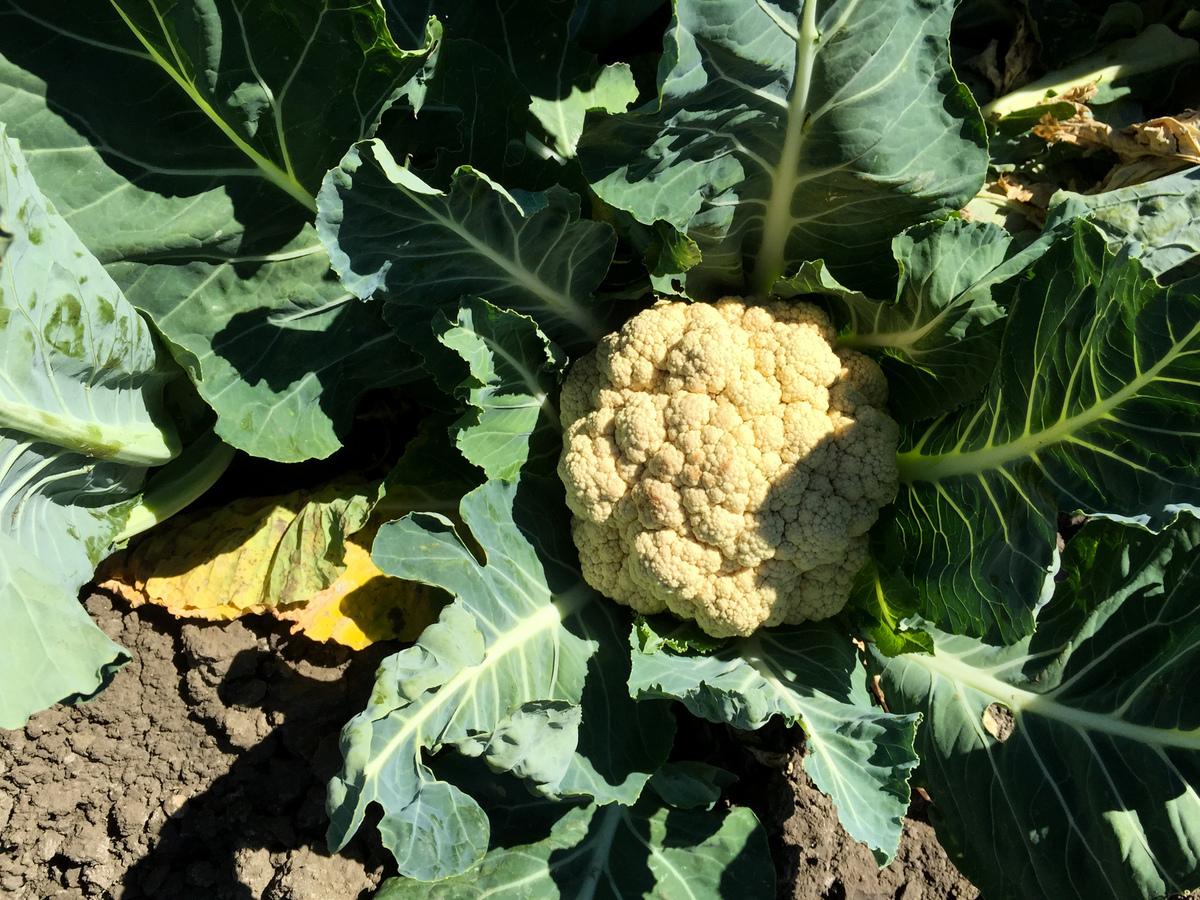 The yellow tint on this cauliflower comes from sun exposure. It's crunchy and every bit as nutritious as white cauliflower.

The story is similar with misshapen crowns of broccoli and peaches that aren't perfectly shaped or colored. Harold McLarty of HMC Farms in Kingsburg, Calif., says 35 percent of his crop never makes it to market. Much of his surplus goes to cattle feed.

The Natural Resources Defense Council estimates that depending on the crop, anywhere from 1 to 30 percent of food grown by farmers doesn't get to the grocery store.

And, as we've reported, food is wasted at every step in the supply chain — during transportation and processing and once it gets to our refrigerators.

And think of everything that goes into growing crop: the water, the fertilizer, the fuel to run the tractor.

Food waste is among the biggest contributors to landfills in the U.S. Lehner says this creates another problem: "When [food] rots, it emits methane, which is a very potent greenhouse gas." Food waste is responsible for a significant portion of methane emissions. 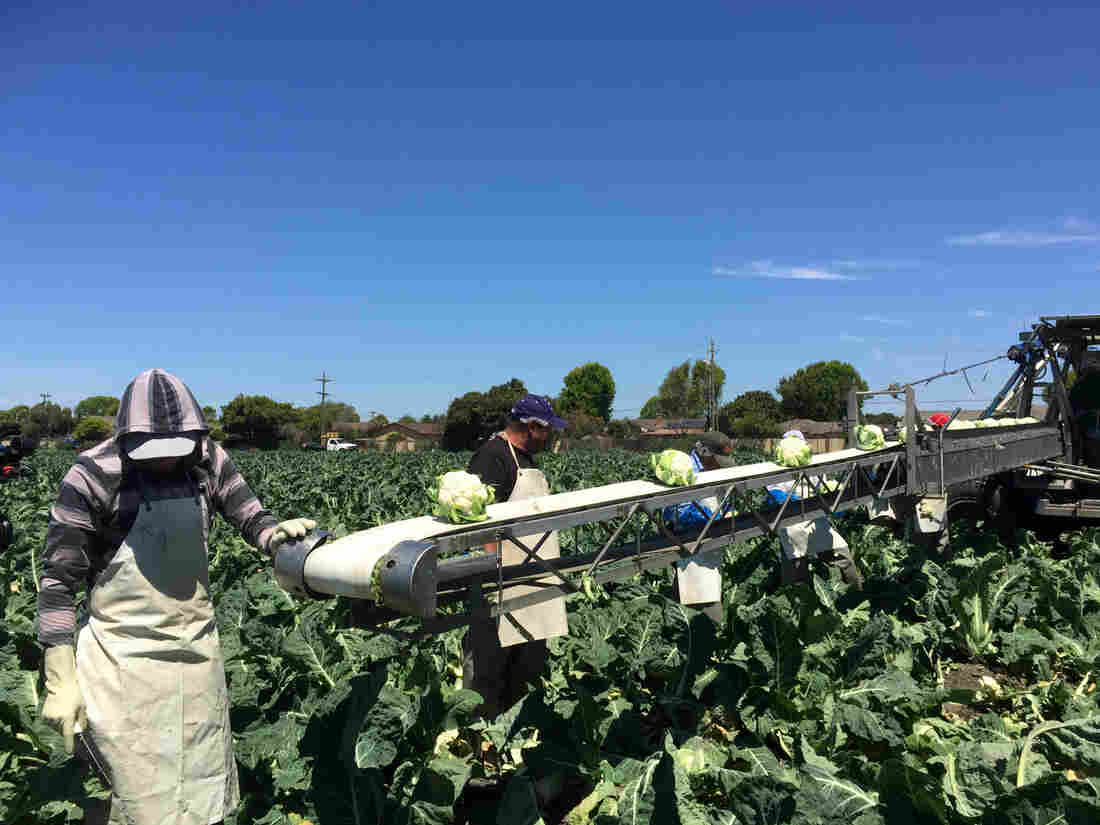 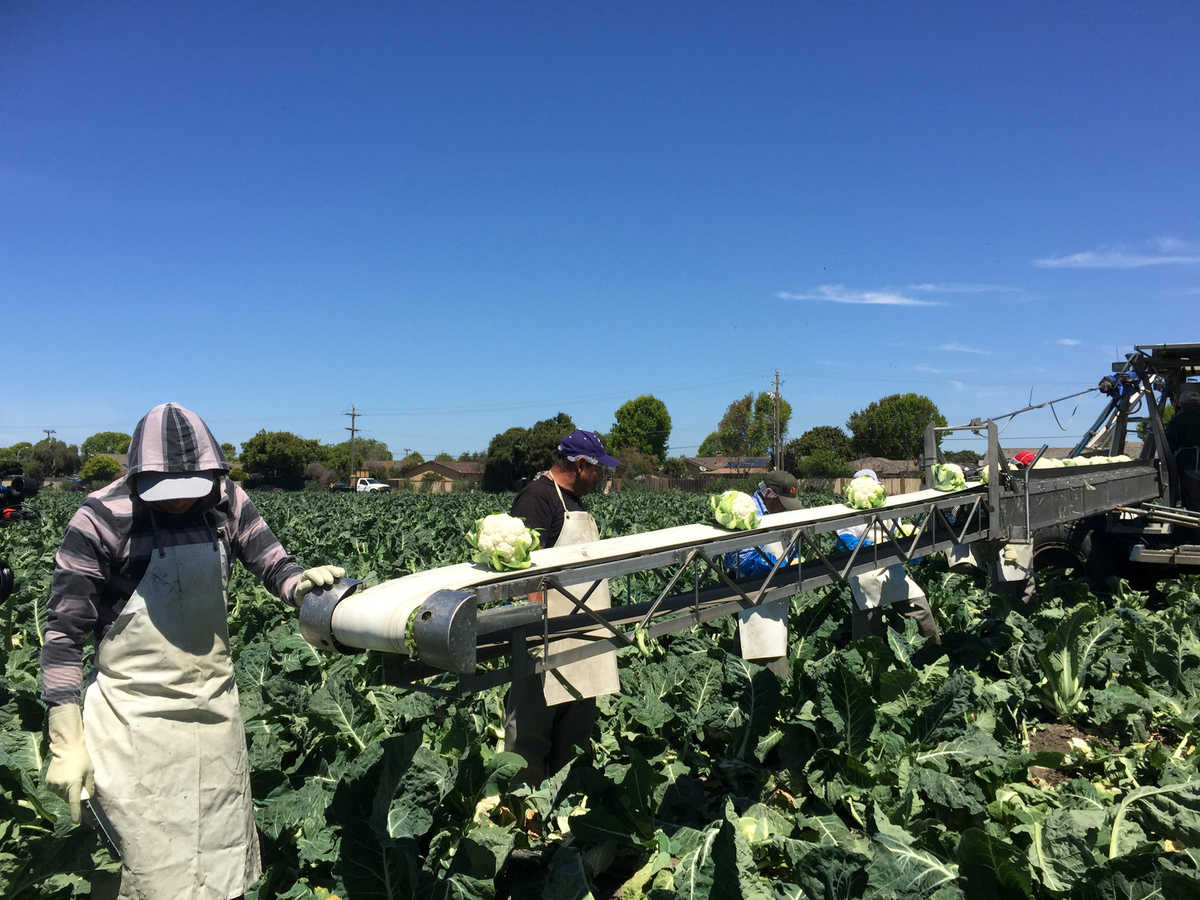 Cauliflower on the conveyor belt at Ocean Mist Farms in Salinas Valley, Calif.

There are new efforts underway to reduce food waste. The Environmental Protection Agency has a Food Recovery Challenge that diverts about 375,000 tons of food waste.

And some producers, including Ocean Mist and HMC Farms, donate some of the less-than-perfect produce to California food banks.

Over the past decade, the California Association of Food Banks says it has doubled the amount of produce it distributes, thanks in part to these kinds of donations.

"This year, we hope to grow the California Farm to Family program by over 70 million pounds," says Paul Ash, executive director of the San Francisco Marin Food Banks. He hopes to expand the program to other parts of the country. 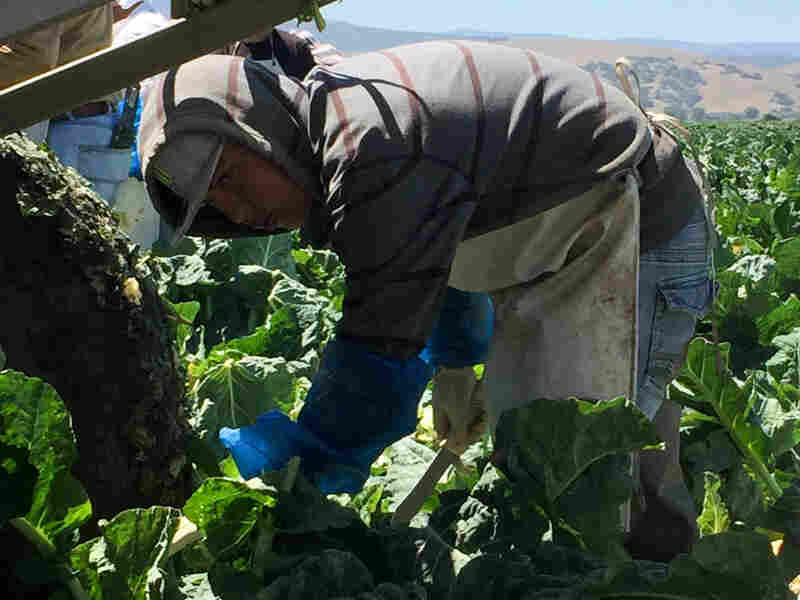 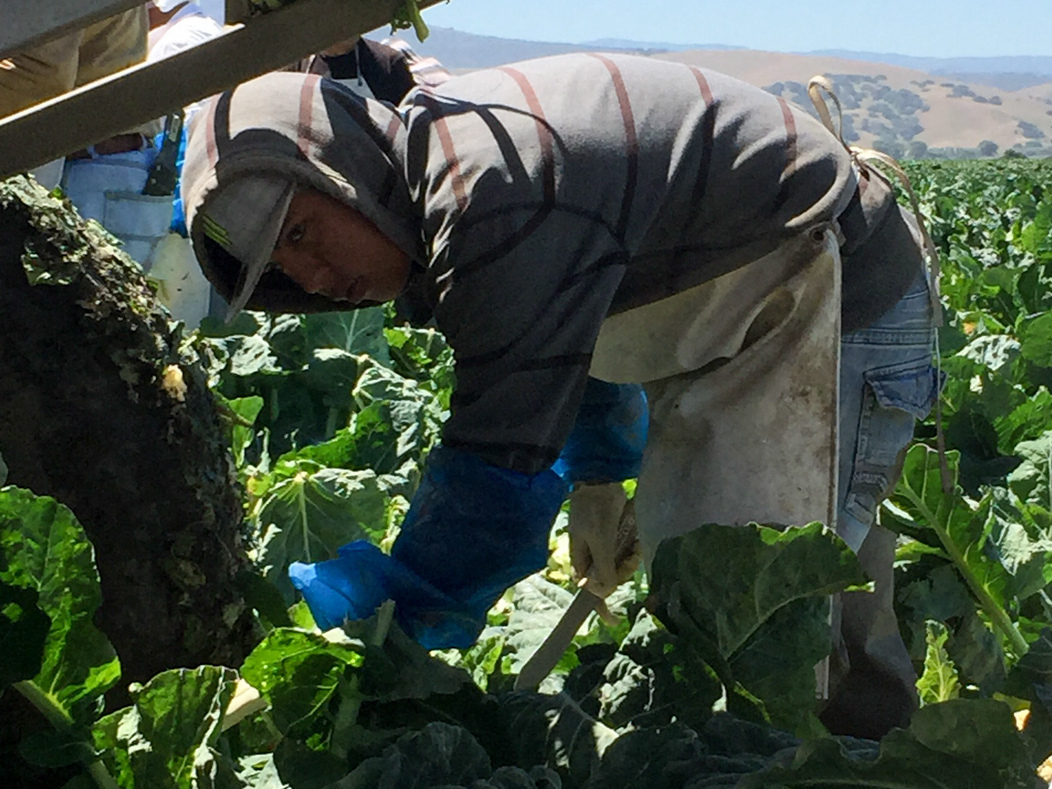 The marketplace demands white, blemish-free, perfectly sized heads of cauliflower. So that's almost all of what workers pick.

Part of that growth has been fueled by a novel way of collecting surplus produce. For cauliflower and broccoli growers, who pack their products in the field as they're being harvested, there's now a co-packing system. As the workers slice and harvest the crop, they pack the premium heads in boxes headed to grocery stores. They separate out the less-than-perfect seconds and pack them in crates destined for the food banks.

It's a simple process, but it's tough to recruit more farmers to join in. Only three out of 25 broccoli and cauliflower growers in California participate.

Why? "It's a lot easier and cheaper just to basically throw [unmarketable produce] away," says McLarty of HMC Farms. He says he'd like to donate more of his peaches to the food banks, but "there's got to be an economic incentive."

California offers tax credits to farmers who donate produce, but the food banks are lobbying for bigger deductions. And there are only six other states besides California that give tax breaks to growers for donating food.

As food banks work to expand their programs, some entrepreneurs say there are so many seconds to go around, they see a whole new business model: selling imperfect produce at discounted prices. 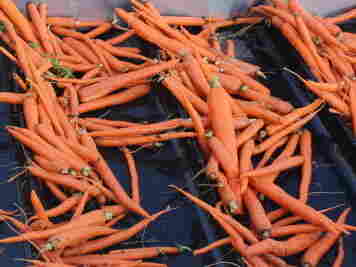 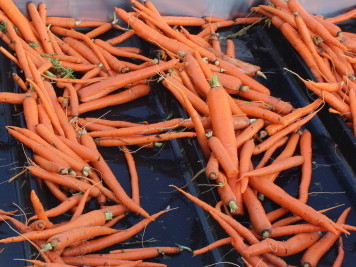 Imperfect Produce is a new venture that's sourcing funny-looking produce and partnering with the chain Raley's to sell it at discounted prices.

As we've reported, a French supermarket chain launched a campaign last year to sell what they dubbed "the grotesque apple, and the ridiculous potato." The concept has so far worked well in France.

Here in the U.S., entrepreneurs behind a venture called Imperfect Produce are betting they can turn Americans on to less-than-perfect produce, too.

In this promotional fundraising video, the startup's co-founder Ben Simon explains how it works: "You get a box of seasonal ugly produce delivered to your door every week, and because this produce looks a little funky on the outside you get it for 30 to 50 percent less." They plan to start delivery in the San Francisco area sometime this summer.

And it seems at least one major grocery chain may give it a go. Imperfect has just inked a deal with high-end chain Raley's, which has more than 100 stores in California and Nevada. The chain says it will launch a pilot program, "Real Good" produce, in 10 Northern California stores in mid-July.

Raley's Megan Burritt says she's working on in-store education. When customers are picking up a funky-looking double cherry or an apple that may look like a reject, she wants them to see it in a new way. Perhaps she'll market them as the underdogs of the produce aisle. "Who doesn't love an underdog story!" Burritt says.