Accessibility links
Appetite For War: What Napoleon And His Men Ate On The March : The Salt Napoleon is credited with the phrase "an army marches on its stomach," but he probably never said it. Now 200 years after his legendary defeat, it's worth recalling his disregard for feeding his army.

Appetite For War: What Napoleon And His Men Ate On The March

Appetite For War: What Napoleon And His Men Ate On The March 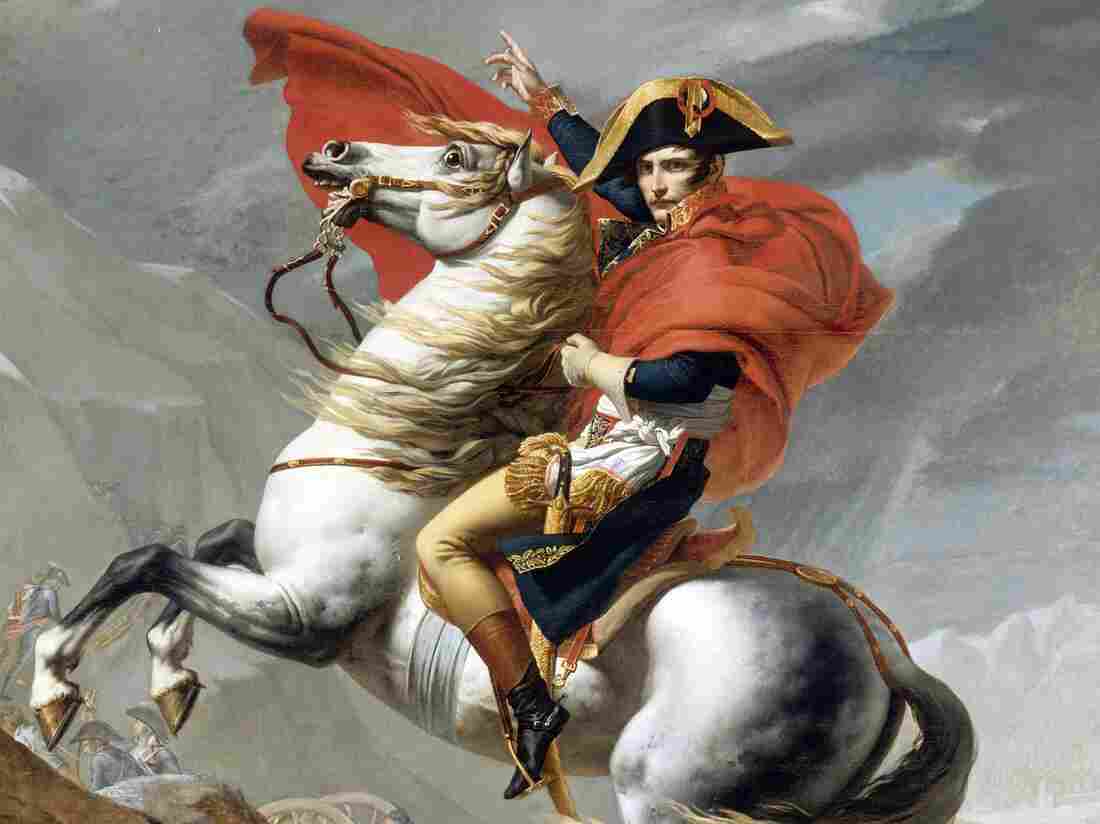 Planning for battle? Napoleon's your man. Planning for breakfast? Not so much. Napoleon Crossing the Saint-Bernard Pass, 20 May 1800/Musee de l'Histoire de France/Corbis hide caption 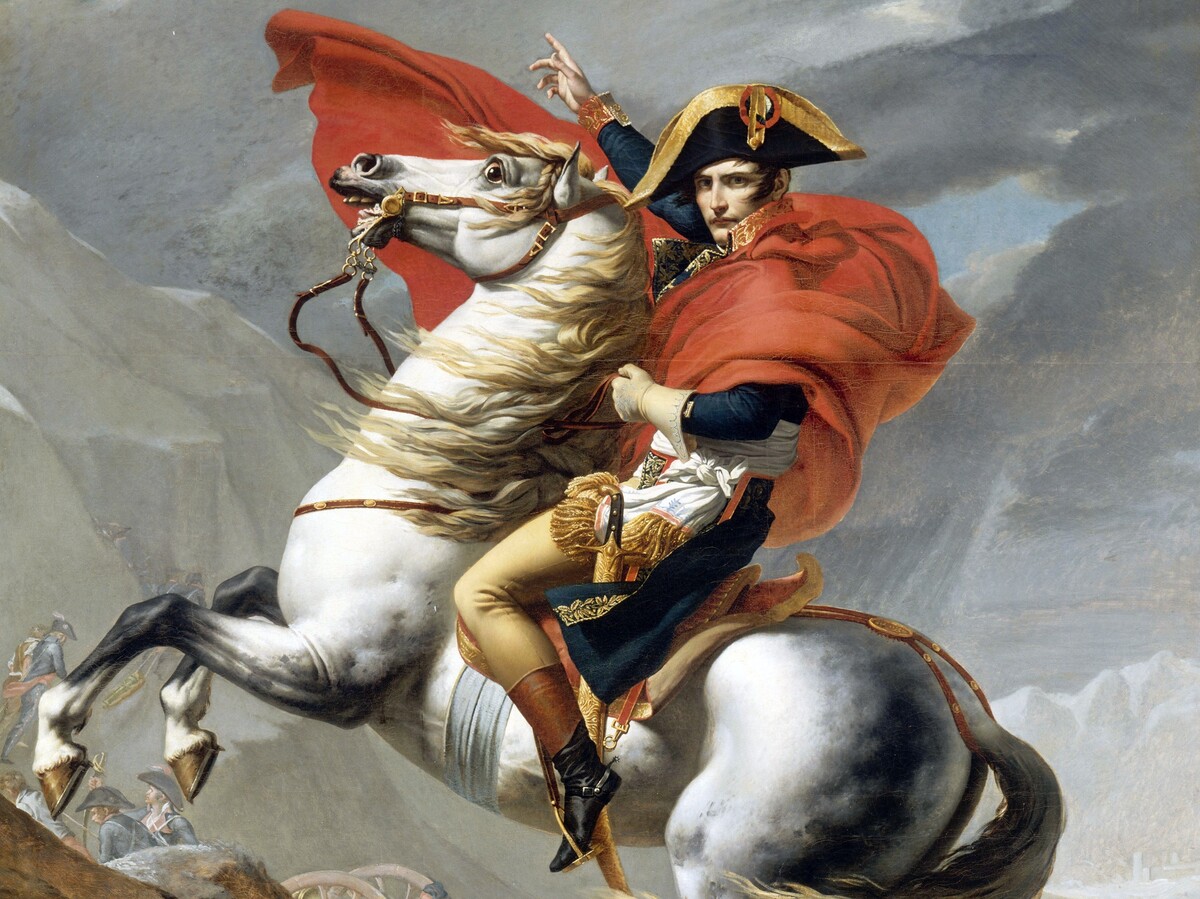 On the bicentennial of the Battle of Waterloo, Napoleon Bonaparte's most celebrated statement about food and warfare — "An army marches on its stomach" — is worth recalling.

If he did say it, the words would have been as hollow as the stomachs of his soldiers. Though one of the greatest military generals of all time, Napoleon was surprisingly negligent about feeding his army.

His orders for the Grande Armée's rations were ample enough: "Soup, boiled beef, a roasted joint and some vegetables; no dessert." But bad roads and poor weather often prevented supply wagons from reaching campsites in time.

During the Italian campaign, in which the 27-year-old Napoleon made his name as a general by defeating a much larger Austrian army and its allies, his men simply foraged off the land or plundered nearby villages — a common military practice then.

Even while fighting the Russians in a poor country like Poland, conditions, though difficult, still allowed for humor. As valet Louis Constant Wairy wrote in his memoirs, the French soldiers learned what he referred to as Polish words: Kleba? Nie ma." Meaning, "Bread? There's none." One day, as Napoleon passed a column of infantry, a hungry solider cried out, "Papa, kleba." "Nie ma," he shot back. "The whole column burst into shouts of laughter," Wairy wrote, "and no further request was made." (As some commenters have pointed out, Wairy's Polish and Polish spelling may have been off.)

But the suffering Napoleon's army underwent on his hottest and coldest campaigns — in Egypt and Russia — was no laughing matter.

The 1798 Egyptian misadventure was launched with such speed and secrecy, writes historian Philip Dwyer in Napoleon, The Path To Power, there was no time even to issue water canteens. As a result, the 55,000-strong army had to endure a three-day march from Alexandria to Cairo through burning sands, in thick European uniforms and carrying heavy armor. Thinking they would be able to forage like they had in Italy, many had thrown away their hard biscuits. Scores died of heat and thirst, while others, driven mad by hunger, thirst, sandstorms and Bedouin attacks, simply put a bullet through their own brains. When the army reached the Nile, there were water and food, but, furious and embittered, the men went on a killing and looting rampage. 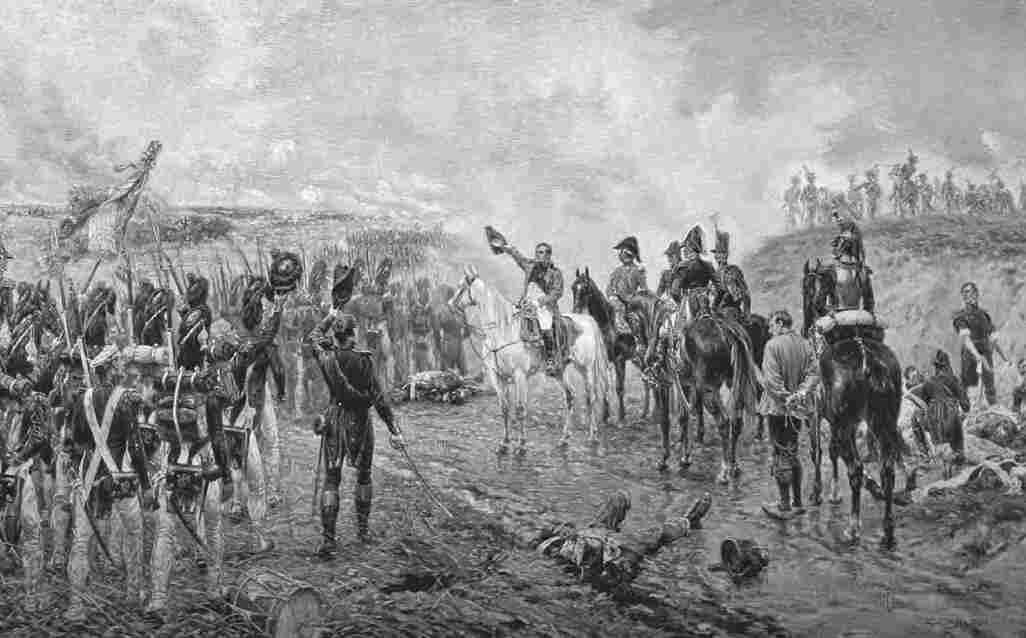 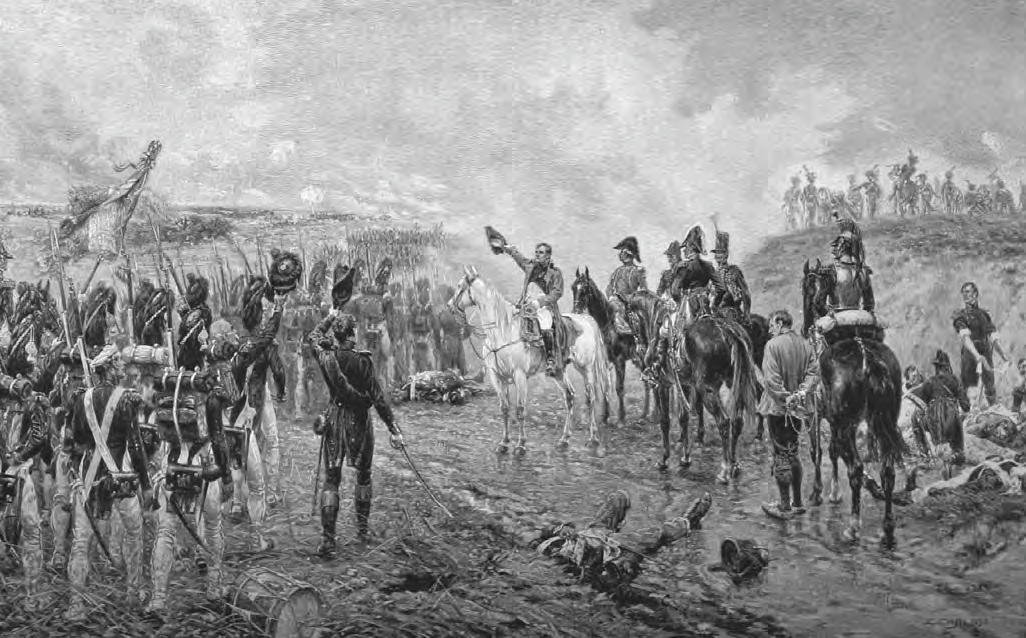 Despite this harrowing tutorial in thirst, Napoleon embarked the very next year on an even more foolhardy 10-day march from Cairo to Syria. Again, there wasn't enough food. Water, carried in goatskins on camel back, was, according to one sergeant, "hot, disagreeable and dirty, like water from a cobbler's tub." And soldiers began to commit suicide. A stampede at a solitary well killed 30. The desperate men dug sea sorrel, ate it and developed dysentery.

And all for nothing. In Syria, the plague awaited them, and at the small but stubborn fortress at Acre (now in Israel), a coalition of Ottomans and English gave Napoleon his first taste of defeat, forcing him to retreat.

Equally grotesque was the 1812 Russia campaign. The Grande Armée was annihilated more by starvation and cold than by the Cossacks. With absolutely no food supplies and temperatures at 20 below zero, the ravenous men ate horseflesh seasoned with gunpowder, often fighting over a fallen horse's flank to tear out its liver, sometimes even before ascertaining whether the animal had died. Through the campaign, flocks of buzzards feasted on corpses of soldiers on the roads and battlefields.

The buzzards were not the only ones who ate well.

The late French historian Andre Castelot wrote in Napoleon that through the famine, Napoleon continued his daily repast of "white bread, Chambertin, beef or mutton, and his favorite rice with beans or lentils." But the valet Wairy claimed that his distraught master, who ranted at his officers for not securing enough rations, ate like an ordinary soldier.

True, Napoleon was an indifferent eater (though fastidious about bread). He often skipped meals, eating only when hungry — usually calling for roast chicken, a dish he seems to have enjoyed. In the kitchens of his Tuileries Palace at Paris, chickens were constantly roasted on spits to suit his erratic hunger pangs. When he rode out of Cairo on Christmas Eve to survey the Suez isthmus, the only provisions he took were three roasted chickens wrapped in paper.

He had a soldier's impatience for fussy dinner rituals and "lacked much of eating decently; and always preferred his fingers to a fork or spoon," writes his valet. Nor did he have a nose for fine wine, being perfectly content to drink Chambertin diluted with water. At camp at Boulogne, he asked a marshal at his table what he thought of the wine being served. The marshal replied with tactful candor, "There is better," making the emperor and other guests smile.

Only after his defeat at Waterloo, when he'd been permanently stripped of power, did Napoleon seem to revel in its mealtime trappings. On the island of St. Helena, as a prisoner of the British, he was served dinner every night by a uniformed butler who announced, "His Majesty is served." As footmen served soups, entrees, roasts, side dishes and sweets on rare porcelain and silver plates, Napoleon — surrounded by a small group of officers in full dress uniform, with their wives in décolleté dresses — played the part of the emperor he no longer was.

What a change from the man who had bolted his breakfast in eight minutes, and dinner in 12. He normally ate his breakfast alone, but on that fateful, rain-soaked morning of June 18, 1815, he called what came to be known as his Breakfast Conference.

As the Duke of Wellington's redcoats waited outside the village of Waterloo, in present-day Belgium, Napoleon summoned his generals to the farmhouse where he had spent a sleepless night. Wellington, he told them with trademark bravado, was "a poor general." The English were "poor troops." His officers were unconvinced. But the emperor assured them it would all be over by lunchtime.

An earlier version of this story stated that Napoleon called the Breakfast Conference on June 18, 2015. In fact, it was 1815.