Accessibility links
In The Japanese Tea Ceremony, Politics Are Served With Every Cup : The Salt The ritual drinking of this ancient beverage — often thought of as the epitome of Japanese restraint and formality — has long been entwined with issues of power and national identity.

In The Japanese Tea Ceremony, Politics Are Served With Every Cup

In The Japanese Tea Ceremony, Politics Are Served With Every Cup 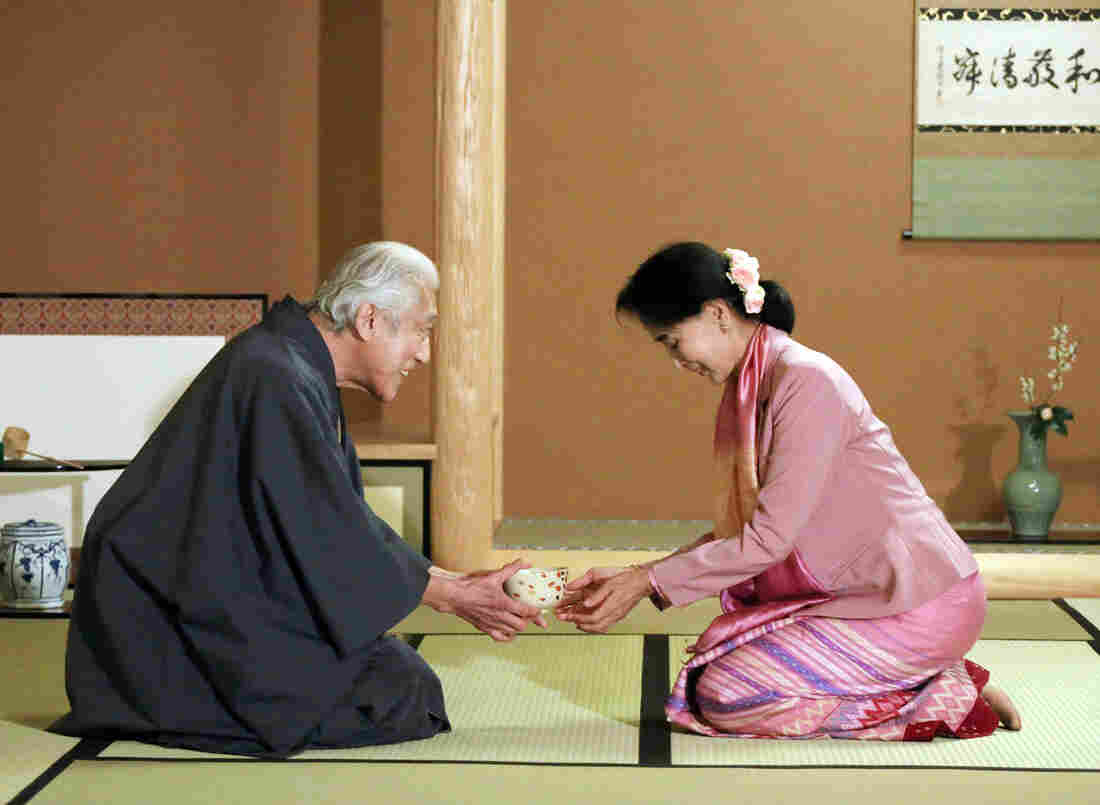 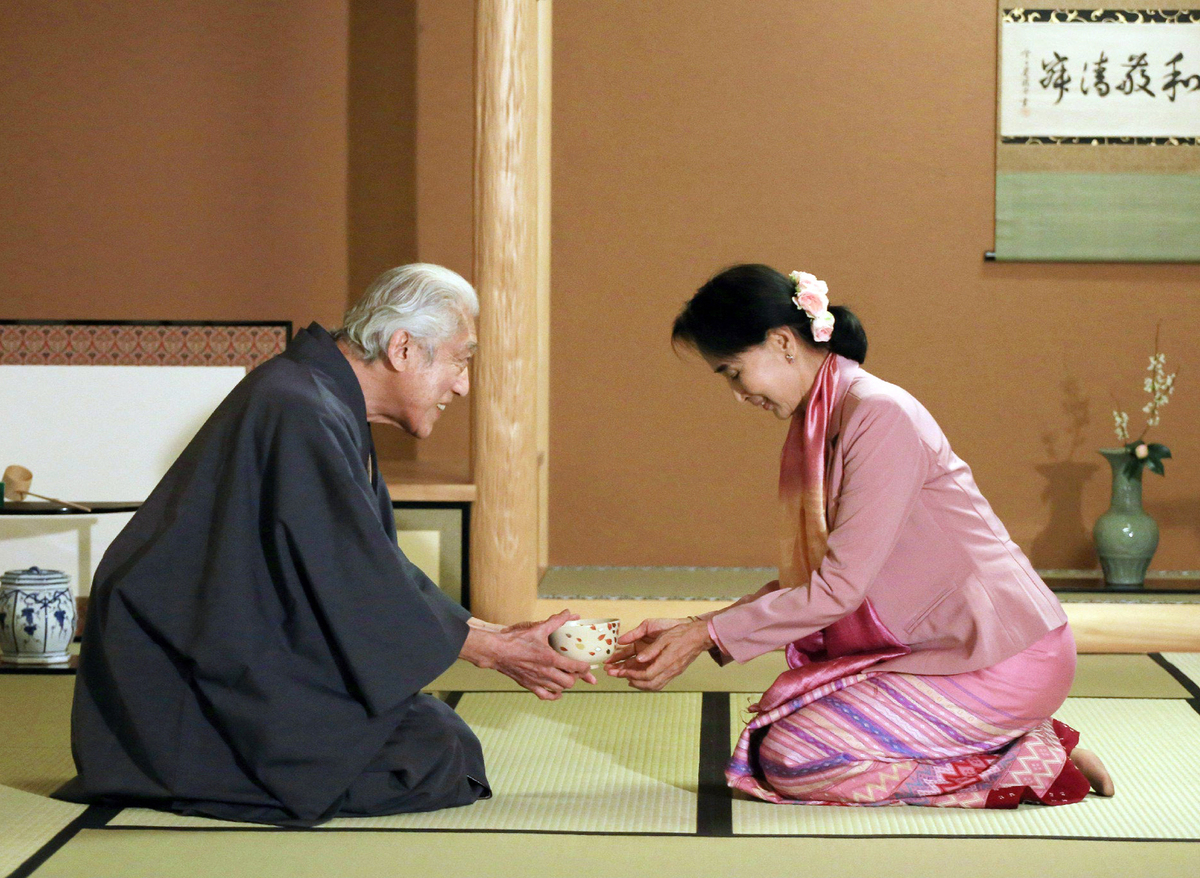 In the U.S., Tea Party politics refers to a certain strain of Republican conservatism. But in Japan, tea politics are of an altogether different sort: The ritual drinking of this ancient beverage — often thought of as the epitome of Japanese restraint and formality — has long been entwined with issues of power and national identity.

A thousand years ago, Buddhist monks studying in China brought tea back to Japan. And while the tea ceremony is meant to encourage spiritual contemplation, early on, it became enmeshed with very earthly displays of power. Japan's 15th-century aristocrats and other elites adopted the esoteric practice, holding tea parties during which they would also display rare Chinese objects to convey power and wealth.

As Andrew Watsy, a professor of Japanese art history at Princeton University, explained to NPR in 2014, "To be politically powerful at this time also meant that you had to show that you had some sort of cultural sophistication as well."

According to Kristin Surak, a professor of Japanese politics and author of Making Tea, Making Japan, the tea ceremony is full of contradictions. It's a Zen-like renunciation of the material world — and simultaneously, a place where expensive tea wares convey affluence. It's intended to be a place of equality, but often serves to reinforce power and hierarchies. Although each preparation is meant to be unique, the ritual is the same thing over and over.

"It's presented as a universalistic practice open to everyone and pitched as being about wa, kei, sei and jaku (harmony, respect, purity and tranquility)," says Surak, who spent more than a decade in Japan, studying the art of the tea ceremony and observing its subtleties. "The claim is that everyone in the world can understand those things, and that if everybody sat around and had a bowl of tea, we could create world peace."

She adds, "At the same time, it's also very much particularly, almost exclusively, Japanese."

Over the years, the ceremony also took on a political dimension, an aspect that became pronounced in the late 16th century. During this tumultuous time of civil war, two leading generals — Oda Nobunaga and Toyotomi Hideyoshi — unified much of Japan. Both used tea ceremonies as a political tool in this process: They awarded tea wares for victories on the battlefield, and the tea room was used as a space for liaising and negotiations.

Tea masters — men who, over years, had mastered the intricate choreography of preparing and serving the tea — wielded great influence. Sen Rikyū was a favored tea master of Nobunaga and later became the second most influential man under Hideyoshi's rule.

Tea continued to be steeped in politics and, by the end of the 17th century, elite warriors were expected to be adept in all aspects of the tea ceremony. The ceremony maintained its prominence when Japan opened up to the West in the 1850s.

This continued with the rise of capitalism in Japan in the early 20th century. Businessmen became the new rulers of the country, and they used tea ceremonies much like the elites and warriors had before them. Tea was still a way to network and display power — and paradoxically, convey humility.

"Striking, though, is that such powerful men knelt on the floor and served tea themselves, including, for example, the key railroad founders, the shipbuilding magnates, and the leading bankers and politicians. Imagine J.P. Morgan or [John D.] Rockefeller doing something like that!" says Surak. 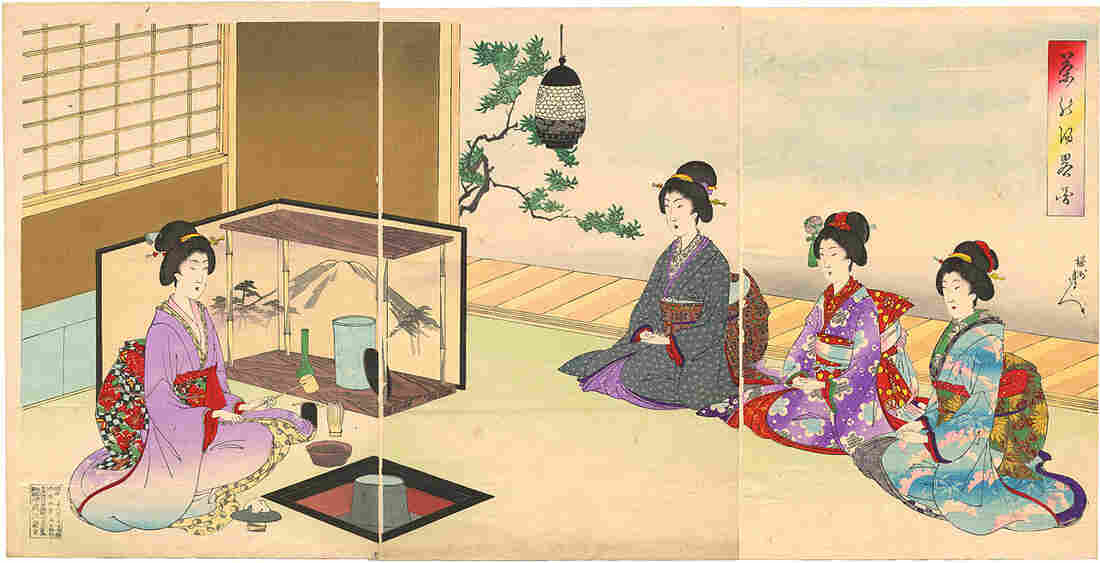 A woodblock print by the artist Toyohara Chikanobu depicts a tea ceremony during the reign of Japan's Emperor Meiji. Under Meiji, tea was included in many schools as part of etiquette training for women. Toyohara Chikanobu/via Wikimedia hide caption

During this same period, the tea ceremony shifted from being a predominantly male practice to one aimed toward women. Beginning in the latter half of the 19th century, under the rule of the Emperor Mejii, tea was included in many schools as part of etiquette training for women, as the manners gained were considered valuable on the marriage market. The inclusion of women in their customer base was not only financially advantageous for tea masters, it also reinforced their status and prestige within society.

Once instrumental in times of war, the tea ceremony was also integral in Japan's redefining itself as a peaceful culture following the end of World War II. It became a type of sogo bunka, or a "cultural synthesis" of the country's traditions. The combination of politics, culture and tea is still evident in contemporary Japan. Even the country's cultural ambassador to the United Nations, Sen Genshitsu, is a tea master.

Although matcha, the Japanese green tea at the heart of the traditional tea ritual, is gaining popularity internationally, Surak believes it is unlikely that the tea ceremony itself will become diluted like other globalized exports.

Reading the tea leaves into the future of this traditional ceremony, she says: "Because the Tea Ceremony, in capital letters, is controlled by very old families with much invested in preserving the practice as it is — and they've done so quite successfully across the centuries — it's unlikely that this formal variant will spawn international styles."

Layla Eplett is a writer based in the Bay Area.