Accessibility links
Genetically Modified Salmon: Coming To A River Near You? : The Salt Scientists are trying to predict what might happen if genetically modified salmon escaped growth facilities. It's a scenario often raised by critics who don't want the FDA to approve sale of the fish.

Genetically Modified Salmon: Coming To A River Near You?

Genetically Modified Salmon: Coming To A River Near You? 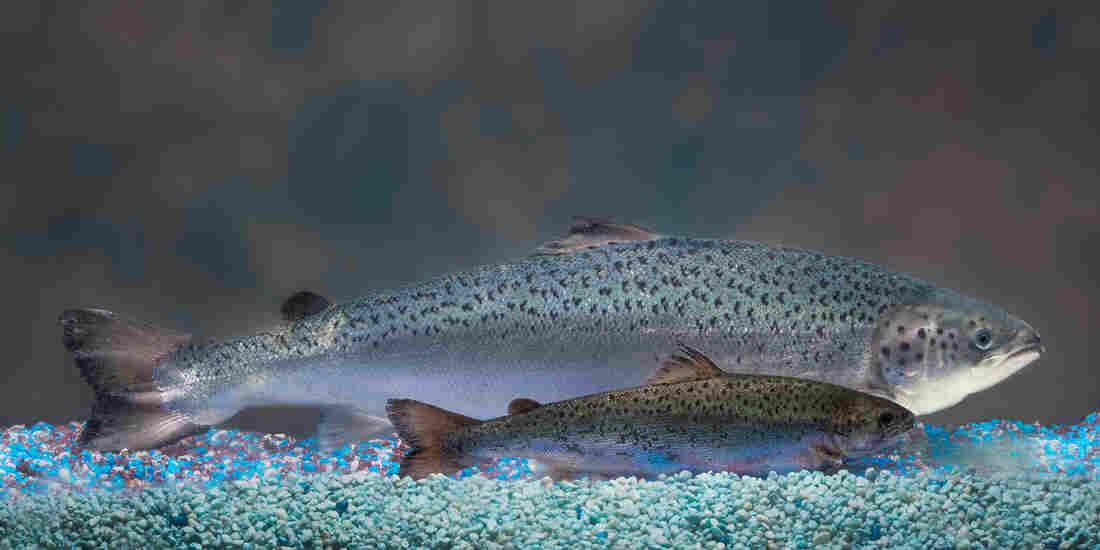 AquaBounty's salmon (background) has been genetically modified to grow bigger and faster than a conventional Atlantic salmon of the same age (foreground.) Courtesy of AquaBounty Technologies, Inc. hide caption 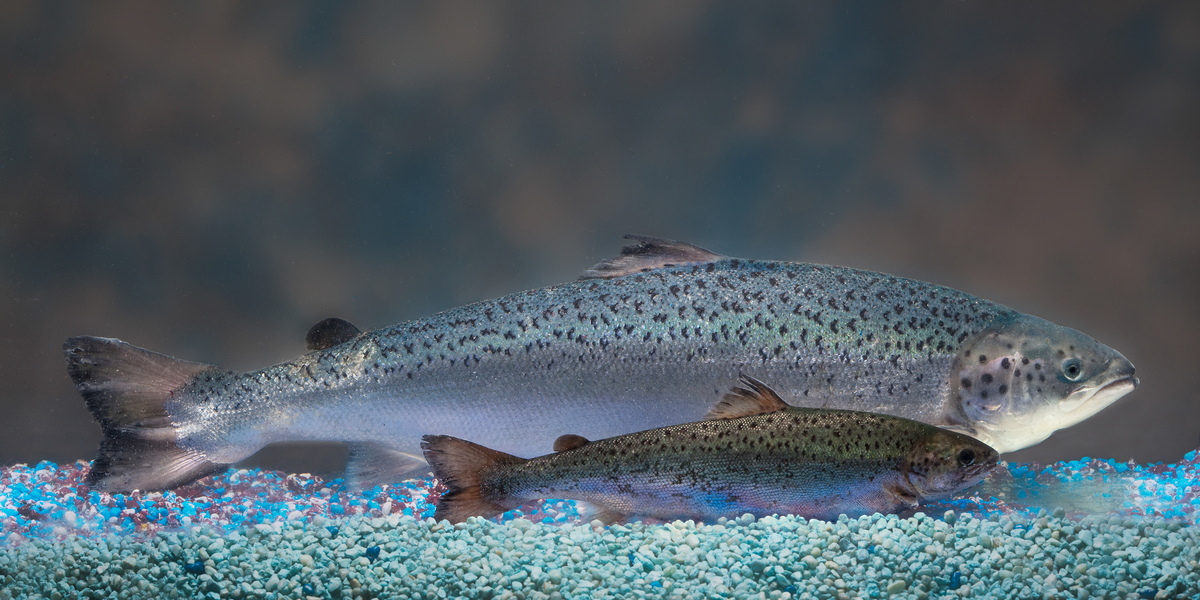 AquaBounty's salmon (background) has been genetically modified to grow bigger and faster than a conventional Atlantic salmon of the same age (foreground.)

While the debate over whether to label foods containing GMO ingredients plays out across the country, another engineered food has long been waiting to hit grocery stores: genetically modified salmon.

Produced by Massachusetts-based biotech firm AquaBounty Technologies, the fish is an Atlantic salmon engineered to grow twice as fast as its conventional, farm-raised counterpart. But AquaBounty's fish has been languishing in the regulatory process: The company has been trying to get the U.S. Food and Drug Administration to approve its salmon for sale for nearly 20 years.

One concern repeatedly raised by critics who don't want the FDA to give the transgenic fish the green light: What would happen if these fish got out of the land-based facilities where they're grown and escaped into the wild? Would genetically modified salmon push out their wild counterparts or permanently alter habitat? In a review paper published this month in the journal BioScience, scientists tackle that very question.

Robert H. Devlin, a scientist at Fisheries and Oceans Canada, led a team that reviewed more than 80 studies analyzing growth, behavior and other trait differences between genetically modified and unaltered fish. The scientists used this to predict what might happen if fish with modified traits were unleashed in nature.

Genetically modified salmon contain the growth hormone gene from one fish, combined with the promoter of an antifreeze gene from another. This combination both increases and speeds up growth, so the salmon grow faster.

Altering a fish's genes also changes other traits, the review found. Genetically modified salmon eat more food, spend more time near the surface of the water, and don't tend to associate in groups. They develop at a dramatically faster rate, and their immune function is reduced.

But would these altered traits help genetically modified salmon outcompete wild salmon, while at the same time making them less likely to thrive in nature? It's unclear, says Fredrik Sundström, one of the study authors and an ecologist at Uppsala University in Sweden. He stresses that we can't assume genetically modified fish would perish quickly in nature, just because they didn't evolve there.

It's analogous, he says, to invasive species. "Invasive species also didn't evolve in the environment where they are now invading, and they still are able to survive and flourish. We could argue along the same lines with the [genetically modified] fish."

Despite obvious differences between genetically engineered and wild salmon, predicting what could happen in a real escape is challenging. According to Sundström, "it's very difficult to predict any ecological consequences before these fish are actually in nature, when it's kind of too late to do anything about it."

But how likely is an escape, really?

"Virtually impossible," says Dave Conley, director of corporate communications for AquaBounty. "We have in essence mitigated all the possible risk scenarios by combining biological and physical methods to reduce those risks to essentially zero," he tells The Salt via email.

AquaBounty grows its salmon in tanks on land, rather than in open-ocean tanks. According to the FDA's environmental assessment of AquaBounty's fish, an additional combination of screens, filters and netting block access to drains and pipes that might provide means of escape.

What's more, AquaBounty says its salmon will be all-female and sterile, so if they do escape, they will fail to reproduce.

But critics remain unswayed by such assurances. Environmentalists question just how dependable the company's containment methods are.

As Dana Perls of the environmental group Friends of the Earth points out, "Land-based doesn't mean not near a river." A fish egg production facility on Prince Edward Island is located next to an estuary, while another facility in Panama, where the fish are allowed to mature, is close to a river, according to the FDA documents. She calls escapes "an unavoidable consequence" of fish farming.

There are also questions about the process used to render the fish sterile. It carries a very small rate of failure, but if a large number of fish escaped at once, a few fertile fish could introduce the transgenes into the wild population.

Sundström attests that the risk of escape is, for the most part, in the future. "We are expecting very little risk at the moment, because there are very few facilities that actually hold these fish. I think what's a worry to some people is if it becomes commercialized and you find these kind of fish in millions of hatcheries around the world."

If that were to happen, he says, the concern is that growers might become lax about containment methods, and then it would just be a matter of time before a fish — or a few — got out.

Sundström says scientists can't predict with absolute certainty what would happen in the event of an escape. The real world is just too complicated. "You have to accept a certain amount of risk," he says.

And how much risk is too much? "It's not my thing to answer." He says that's for regulators to decide.