Accessibility links
A Toast To Butter Sculpture, The Art That Melts The Hearts Of The Masses : The Salt Once the province of nobles, food sculptures became the art of the people in America. Nowhere is this truer than the butter sculpture, a form that is at once familiar and impressive. 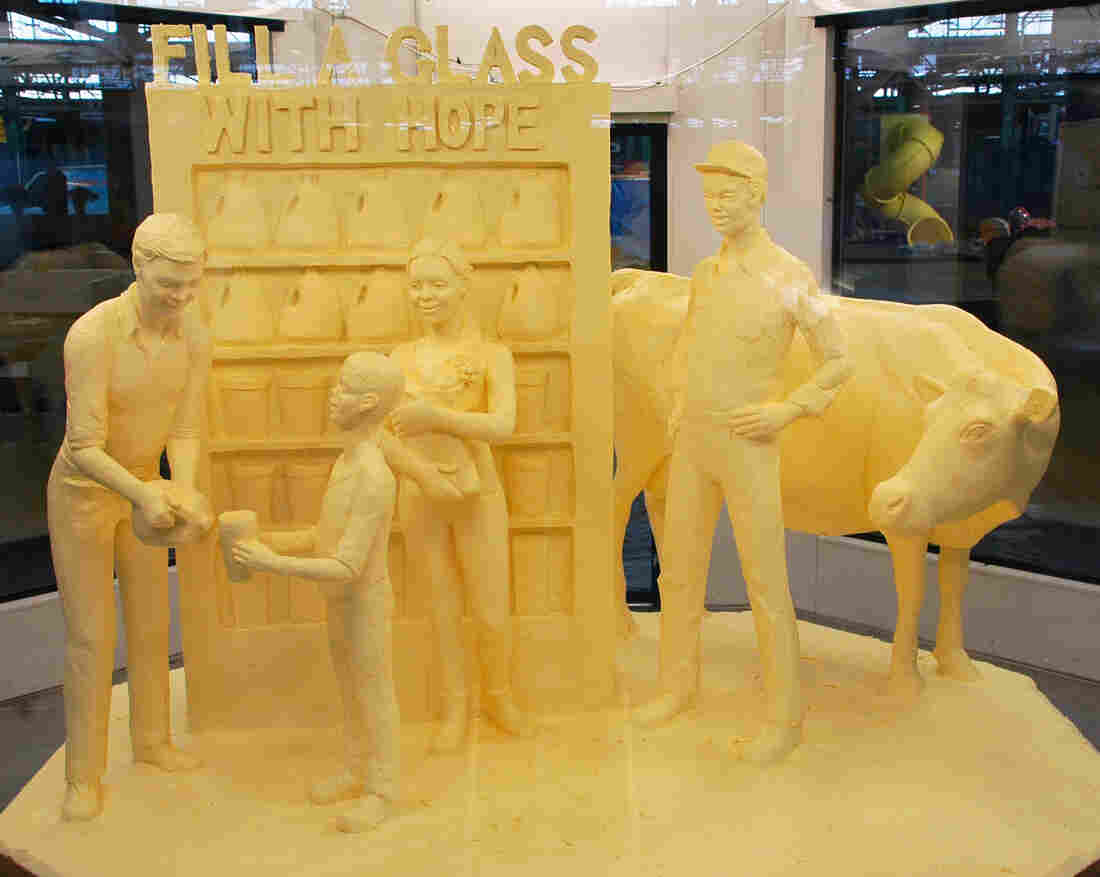 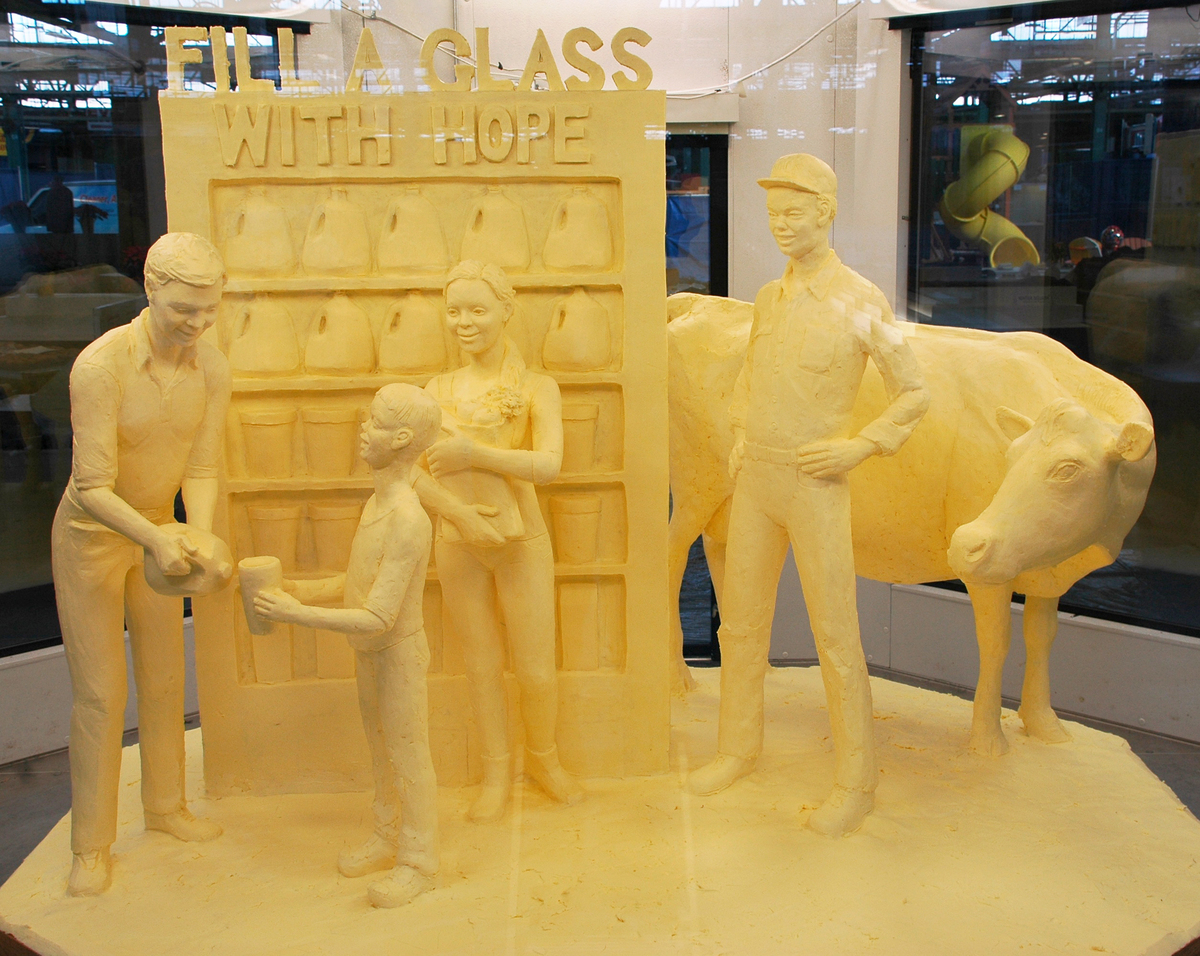 Art of the people: Fill a glass with hope, a butter sculpture crafted by Jim Victor and Marie Pelton. "People don't understand how [the sculpting] is done -- it's like magic and just appears," Victor says. "But people understand butter."

In the Medieval era, kings and queens hosted feasts adorned with surprisingly complex edible sculptures depicting humans and animals alike. Outside the castle walls, of course, people struggled to put enough food on the table — much less, worry about its presentation afterward. But in the modern United States, food sculpture is the art of the people. Nowhere is this truer than the butter sculptures so common at Midwestern state fairs.

Caroline Brooks, an Arkansas housewife, was the unlikely artist who brought butter sculpture into the spotlight nearly 140 years ago. At the time, farmers' wives were in charge of churning milk into butter, and often used wooden molds or stamps to shape the bricks. By sculpting the butter instead, Brooks took the practice one step further and turned it into a staple of so many fairs.

At the Philadelphia Centennial Exposition in 1876, Brooks crafted a butter portrait of a young woman called Dreaming Iolanthe and put it on display. According to Pamela Simpson's book Corn Palaces and Butter Queen, the sculpture was "repeatedly praised as 'the most beautiful and unique exhibit at the fair.' " 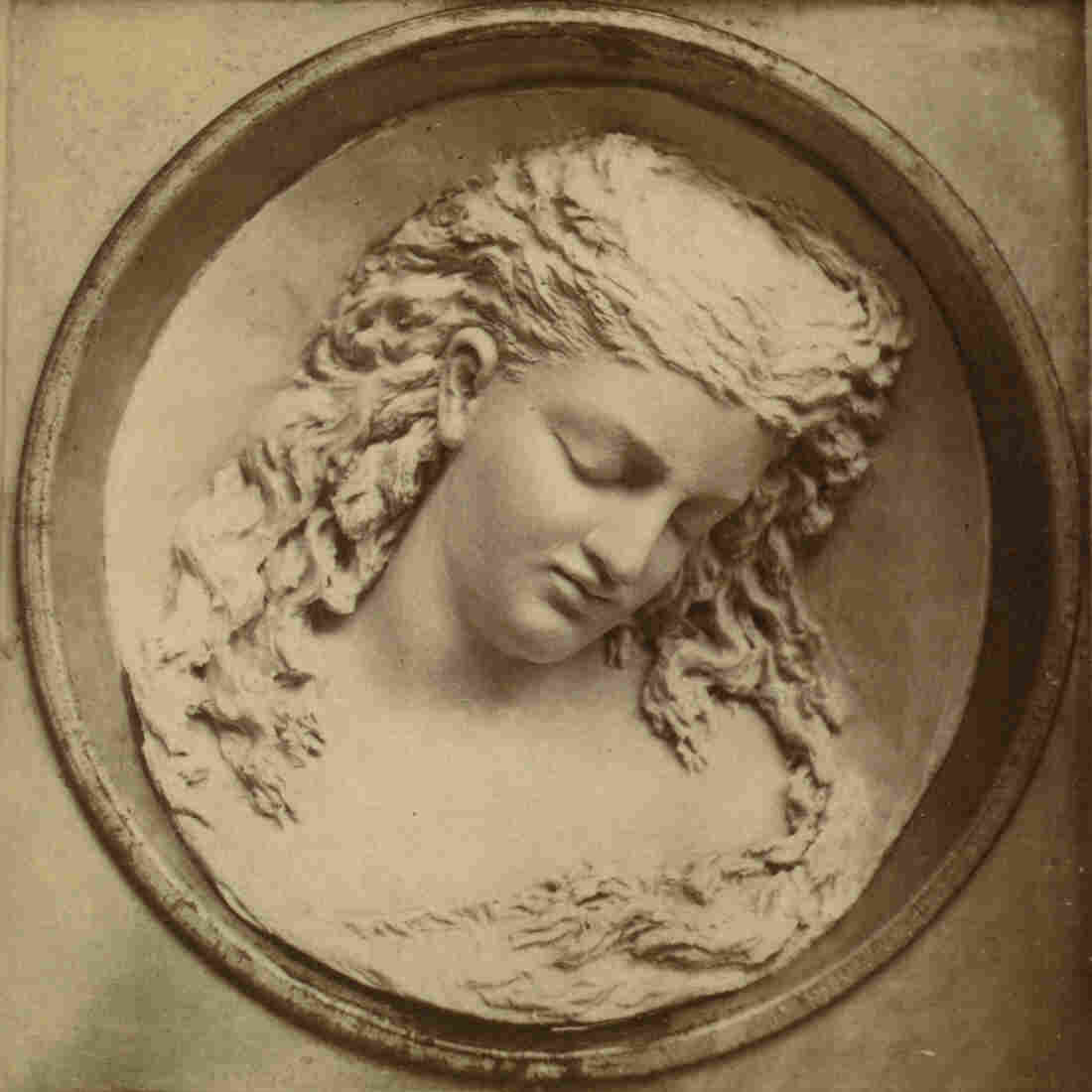 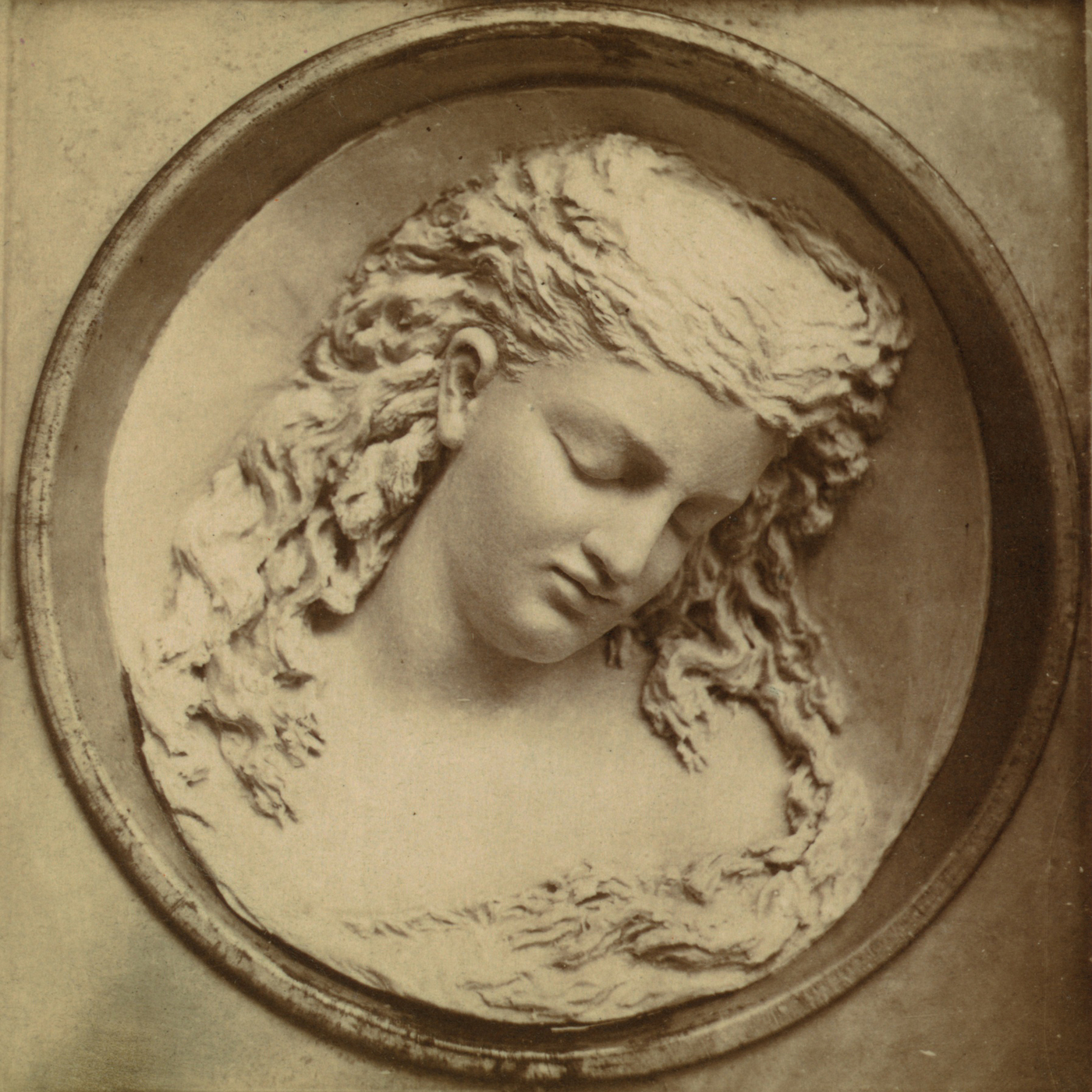 Dreaming Iolanthe, a butter sculpture created by Caroline Brooks for the Philadelphia Centennial Exposition in 1876

Dairy companies realized that sponsoring butter sculpture exhibits was a smart advertising move and, Simpson writes, "by the early twentieth century 'ornamental butter' was one of the regular categories at most Midwestern state fairs."

Especially in the early days of the art form, the amount of butter used to make each sculpture was almost always listed in advertising or at the show itself — up to 1,500 pounds in some cases, writes Simpson. (That's about 6,000 sticks of butter.)

Despite the extravagance, butter sculptures were never hoity-toity gallery art, nor were they ever meant to be bought or sold. Their placement at state fairs, where anyone with an admission ticket could view them, suggested that the American excess that would cause thousands of butter sticks to be molded into pastoral tableaus was for the common man, not just the wealthy. 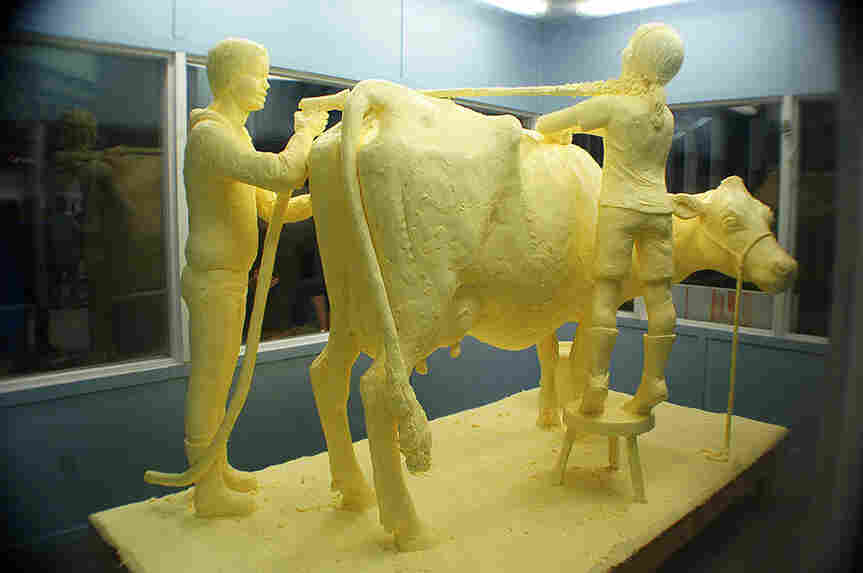 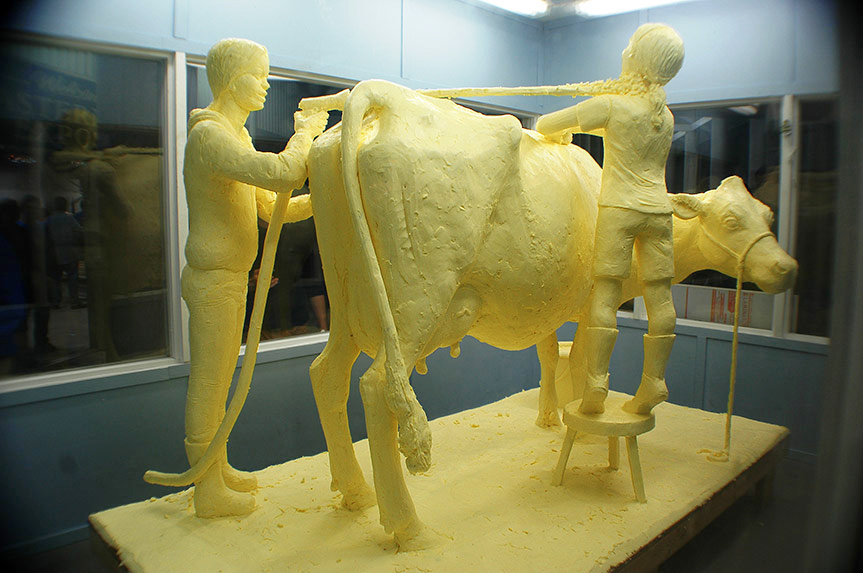 Back in Brooks' day, sculptures might have been kept cold by placing them over a bowl of ice, but since then, butter sculpting technology has come a long way. Today's artists work in refrigerated rooms and may even do edible sculpture full time. Jim Victor and his wife, Marie Pelton, are a sculpting duo and work in all food mediums — from chocolate to cheese and, of course, butter. They have custom-made mobile refrigerated booths that allow them to build their sculptures anywhere.

Yet while butter is a familiar staple, their creations are more than what meets the viewer's eye. Most large-scale butter sculptors are working with more than edible materials. Underneath those buttery exteriors often lies a web of metal that keeps everything in place.

In other words, those butter cows so common at Midwestern state fairs aren't solid dairy – they're essentially a giant version of a hollow chocolate rabbit. These welded understructures are generally the first things that artists build once they've finalized the sculpture's design. 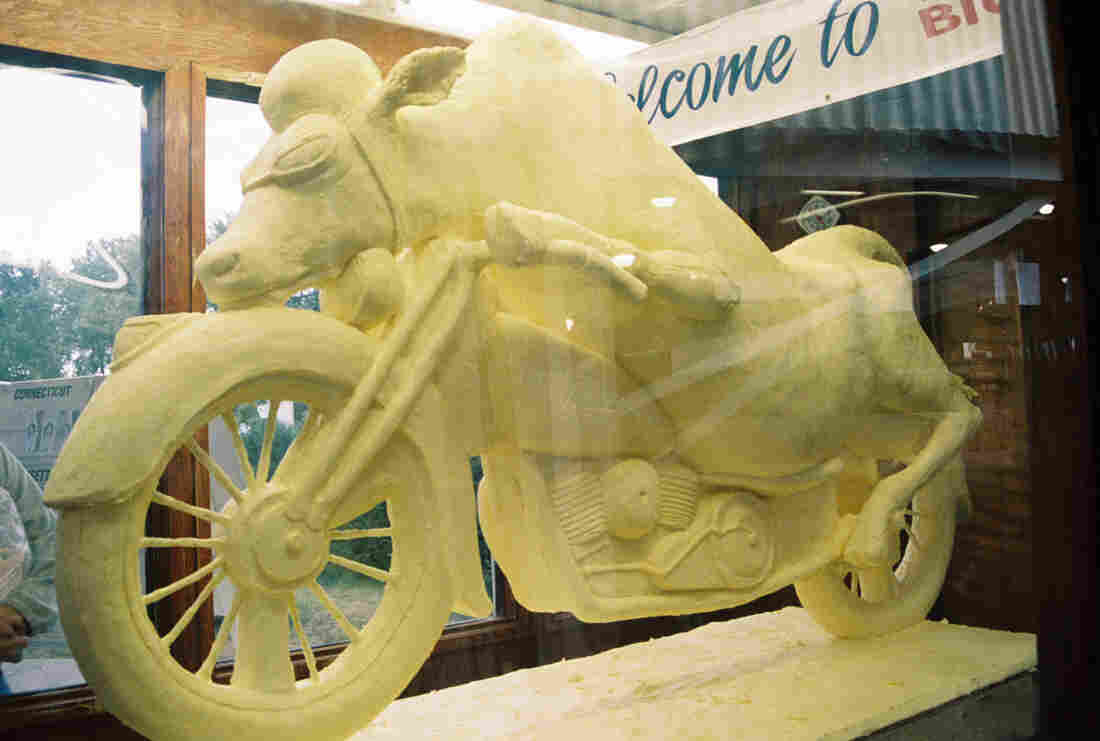 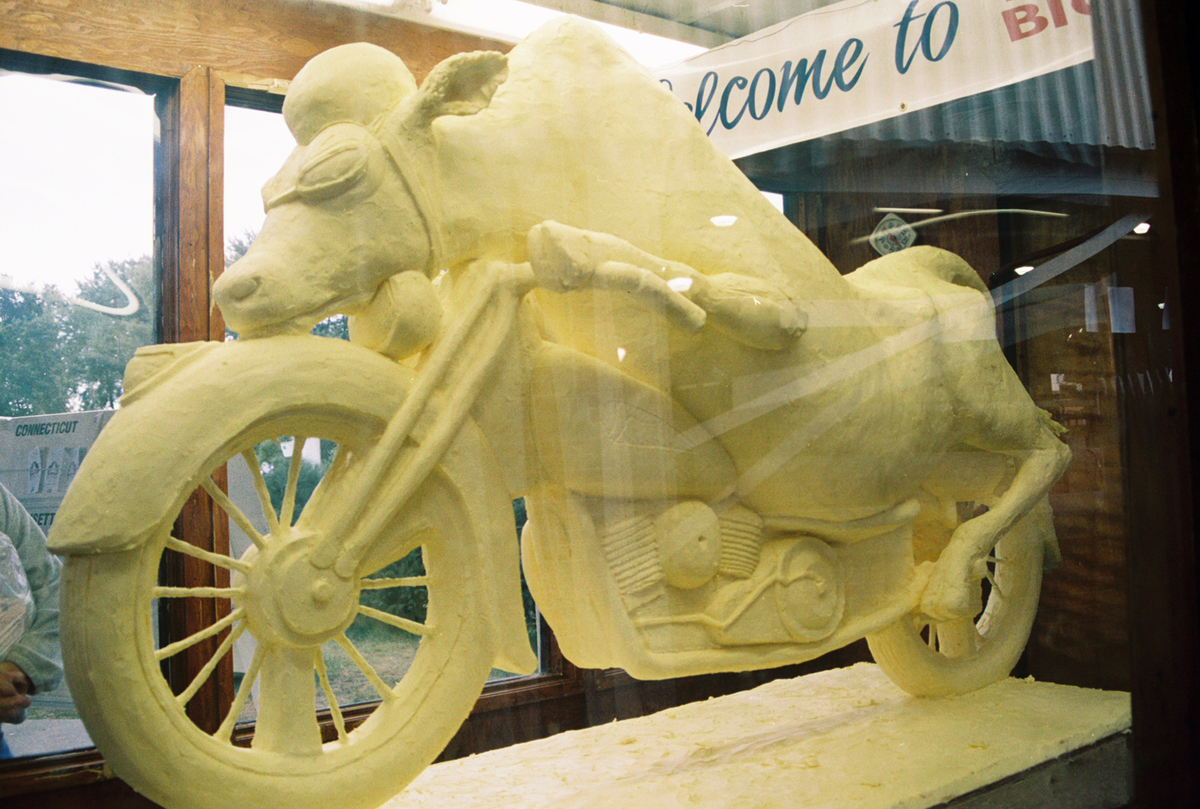 Cow on a motorcycle, by Jim Victor and Marie Pelton

"We use steel and will bend it into the general shape of the figure or animal or whatever it is we're making," Pelton says. "Then you add butter on top as the final phase." Though globbing on layer after layer of butter seems like it should take a lot of work, as it turns out, sculpting butter has little in common with Michelangelo chipping David out of marble. As Victor says, "Butter is fast."

So why have butter tableaus maintained their appeal for so long? Perhaps it's because they manage to be both familiar and impressive at the same time. Unlike sculptures made with clay or marble, which can be intimidating, Victor thinks butter is familiar to most viewers. People have tasted it, melted it, or baked it into cookies. Even if people are unlikely to make their own life-sized butter sculptures at home, the art form itself is accessible.

"People don't understand how [the sculpting] is done — it's like magic and just appears," Victor says. "But people understand butter."

An earlier version of this post incorrectly stated that 1,500 pounds of butter equals about 4,000 sticks of butter. It should have said about 6,000 sticks.