Accessibility links
Peru's Pitmasters Bury Their Meat In The Earth, Inca-Style : The Salt Step up your summer grilling game by re-creating the ancient Peruvian way of cooking meat underground in your own backyard. It's called pachamanca, and it yields incredibly moist and smoky morsels. 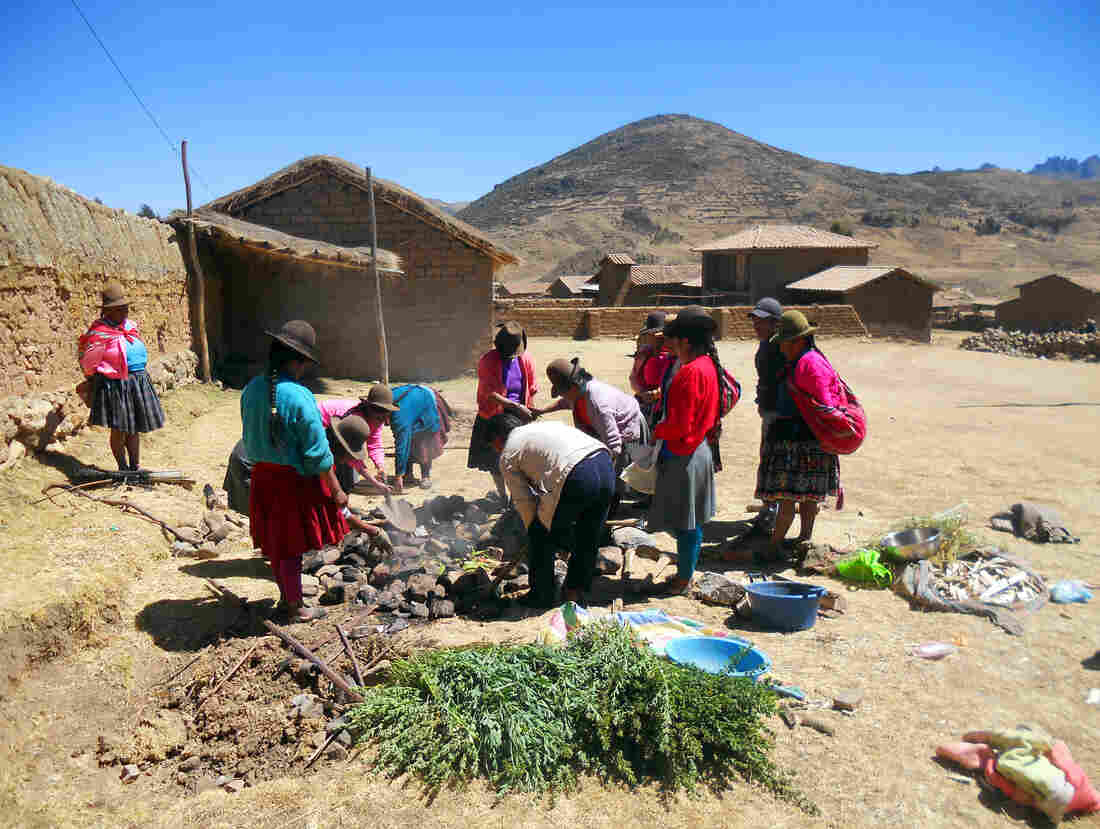 A traditional pachamanca in Peru in 2012. Sam Grey/Flickr hide caption 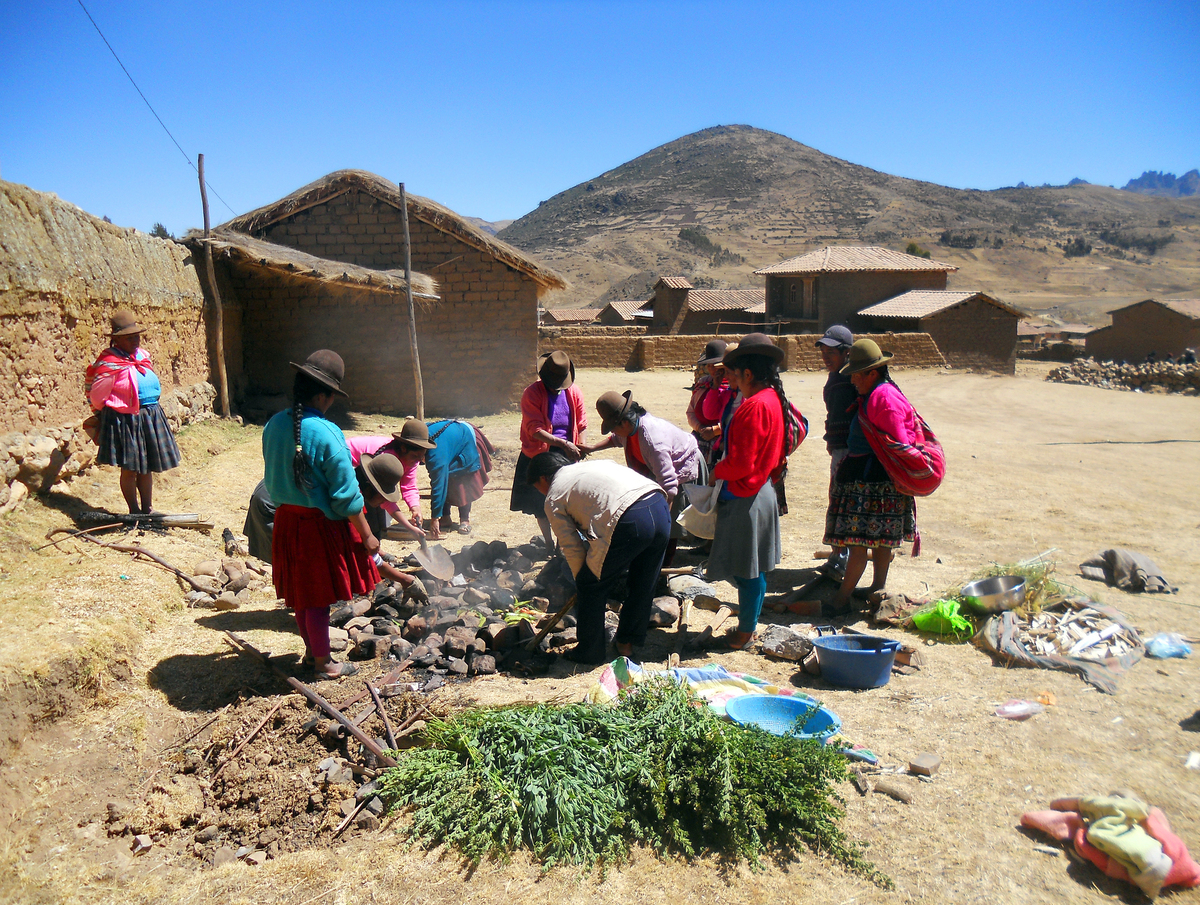 A traditional pachamanca in Peru in 2012.

What's the epitome of summer for a lot of Americans? It's communing around a grill, with friends and family, waiting for a slab of meat to cook to juicy perfection.

In Peru, people like to gather around heat and meat, too. Except the heat — and the meat — are buried in the ground. It's called pachamanca, a traditional way of cooking that dates back to the Inca Empire. The pit cooking technique has evolved over time but remains an important part of the Peruvian cuisine and culture, especially in the central Peruvian Andes all year-round for family get-togethers and celebrations.

Imagine a cornucopia of dozens of potatoes and corn ears and giant slabs of well-marinated meat, stacked carefully in layers (like these carefully constructed Pizza Hut salad bar salads). Pachamanca is that cornucopia turned upside-down and sealed for hours.

Pachamanca is the combination of two words in the Quechua language: pacha, for earth and manka for pot. To make one, "you basically make a pot in the earth," says Rosa Maria La Madrid, foodways coordinator of the Smithsonian Folklife Festival, which is held on the National Mall this year from June 24 to July 5 and this year has Peru as its central theme. Traditionally, you'd dig a hole in the earth. But since this pachamanca demo that happened Friday was on the National Mall, the team improvised by building a small oven with bricks above ground.

Big volcanic rocks serve as heat source, so instead of grilling your meat, you grill the rocks over fire for roughly an hour.

"It has to be volcanic rocks that can support all the heat or else the rock will burst," La Madrid says. The rocks used for demonstration were lava rocks that came from a local gardening store, she says.

After the rocks are blazing hot, they become the bottommost layer of the pit. Then the first layer of food goes on: vegetables that need longer cooking times like potatoes, sweet potatoes and the Peruvian tubers yucca, oca and mashwa. The second layer is the meat — a whole lot of it.

"We use three to four types of meat," La Madrid says, "The most common ones are chicken, beef and pork. You can also use lamb and mutton. We call these different types of meat pachamanca flavors." 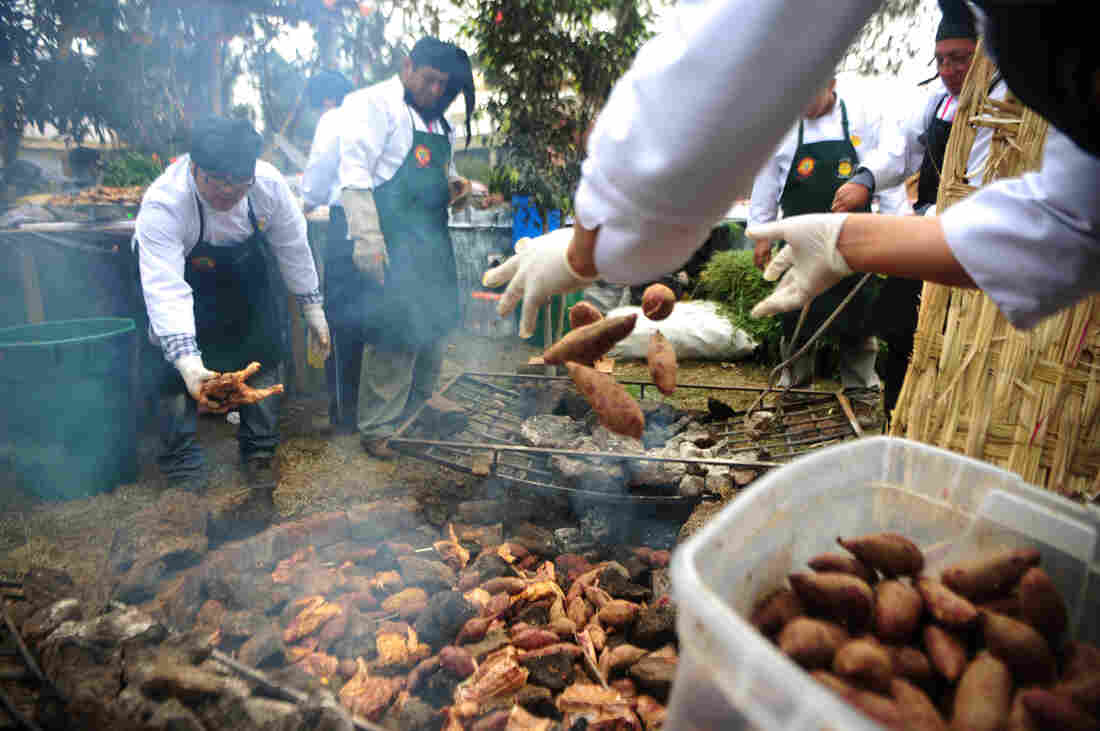 People throw potatoes into a pachamanca during the gastronomic fair Mistura in Lima in 2011. Ernesto Benavides/AFP/Getty Images hide caption 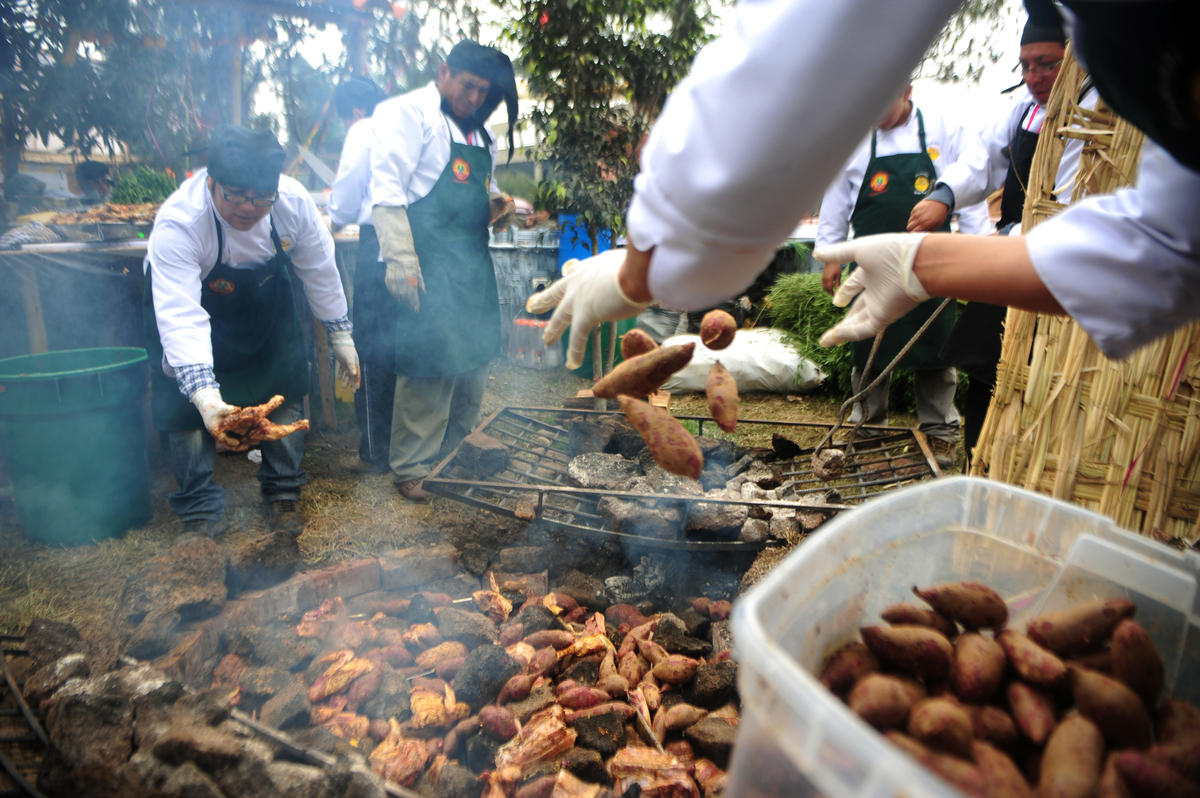 People throw potatoes into a pachamanca during the gastronomic fair Mistura in Lima in 2011.

Another layer of rocks — as hot as charcoal at this point — go on next. Then, it's vegetables that need less cooking time, such as corn, fava beans in their pods, a little pot with cheese inside it and sweet Peruvian tamales.

After the food is in there, it's time to cover it all up. Banana and plantain leaves go first to give some flavoring, and then craft paper (think your brown lunch bag), polyester fabric and some cotton fabric too. Lastly, soil is put on top. Traditionally, the soil covers almost all of the fabric, but here at the demonstration it was only sprinkled on for safety reasons.

A little cross and flowers go on top. Then, according to La Madrid, you designate someone to be the godfather and godmother for the pachamanca. It's typically the person in charge and it's their job to bring beer for everyone at the end.

Now, you can go grab that beer, or the sweet fermented corn drink chicha as the oven does its magic for one to two hours. Seasoning slathered onto the meat is steaming and trickles down through the layers to every single potato at the bottom. When the pit is opened, even the steam that emerges is filled with a delicious smoky aroma.

"Sunday is for family and pachamanca is a very Sunday dish," La Madrid says. It's not only a family activity that involves many helping hands, but the big portions can easily feed a whole extended family.

Unfortunately, the food prepared at the demonstration wasn't served to the public, although La Madrid said everything turned out well.

Folklife Festival staff says the food couldn't be served to the public per National Park Service regulations, but that it was consumed by staff and some festival participants on Sunday.

It's said that the meat is very similar to barbequed meat, a little charred on the outside but much more moist on the inside. There's no extra sauces needed since the seasoning provides the flavor and the steaming helped spread the seasoning everywhere.

Pachamanca-style pit cooking also exists in other South American regions under a different name, such as curanto in Patagonia. Francis Mallman, an Argentine chef and guru of cooking with fire, praises pit cooking and its unique flavors in the documentary series Chef's Table.

"The taste you get from this pit in the vegetables is amazing because they're extremely moist and smoky," Mallman says on the show.

So there you have it — a steaming pit full of ancient Inca traditions. Better start loading up on those volcanic rocks (which can be found at local gardening stores) if you want to try your hand at the recreating a Peruvian taste in your backyard.