Accessibility links
A Dose Of Culinary Medicine Sends Med Students To The Kitchen : The Salt Aspiring doctors at the University of Chicago are learning how to teach patients about healthy eating. Nutrition advocates say this kind of training is critical to fighting obesity and diabetes. 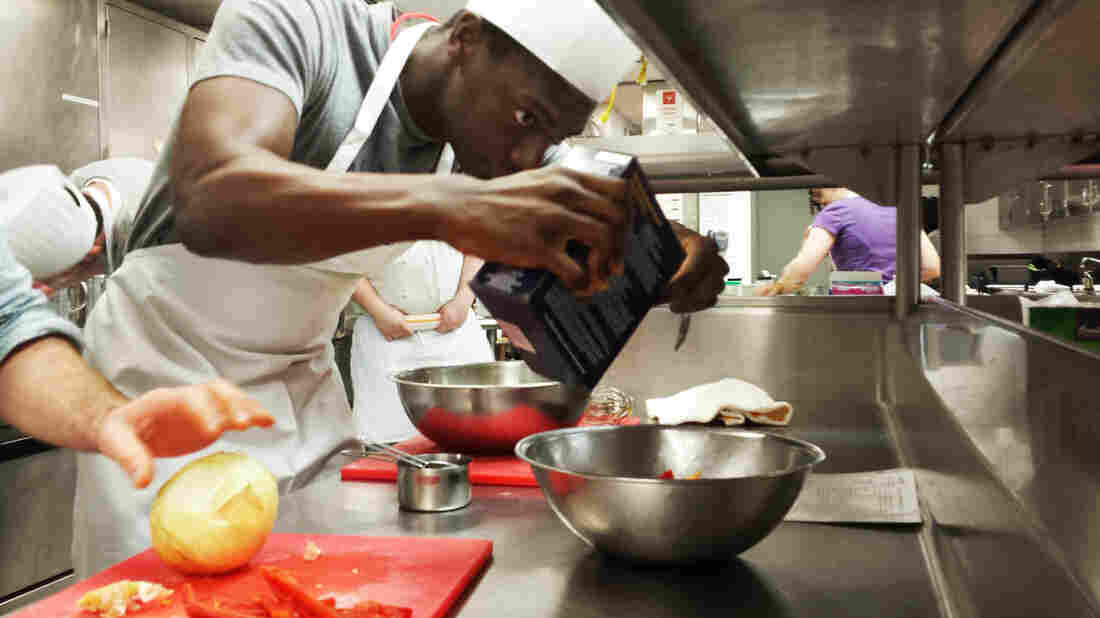 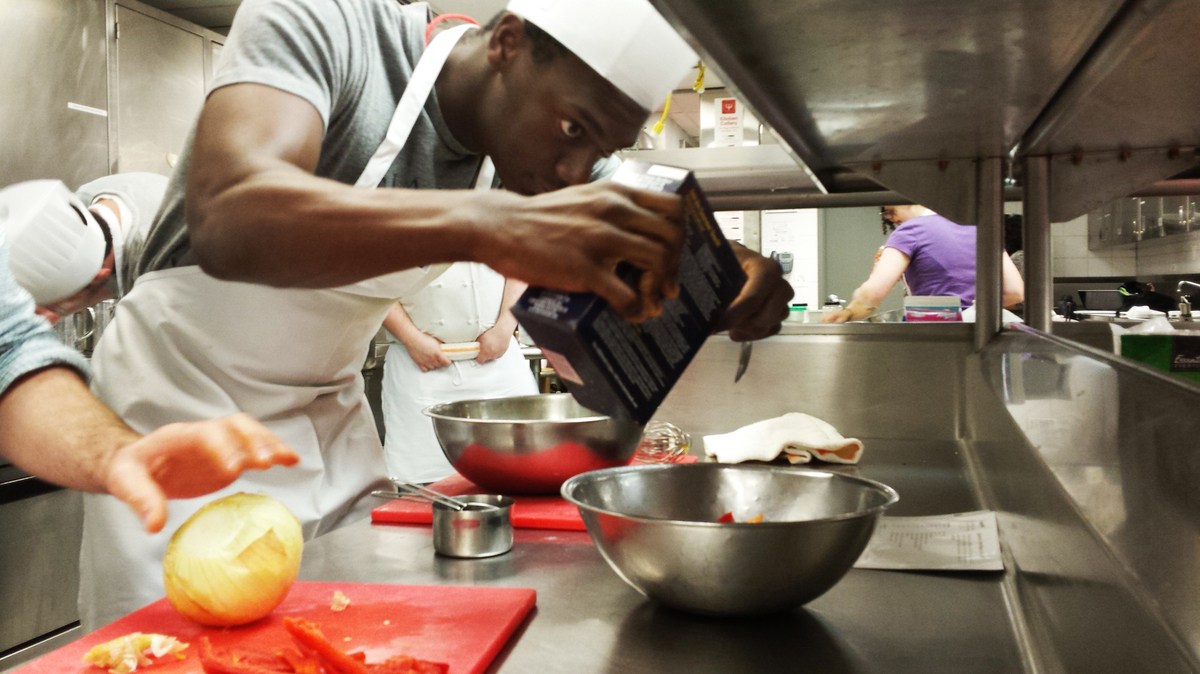 University of Chicago medical student Manny Quaidoo adds a pinch of salt to the spinach feta frittata he's learning to cook as part of a culinary medicine class.

When it comes to premature death and disease, what we eat ranks as the single most important factor, according to a study in JAMA, the Journal of the American Medical Association. Yet few doctors say they feel properly trained to dispense dietary advice. One group, at least, is trying to fill that knowledge gap.

In a bustling kitchen at one of Chicago's top cooking schools, a student cracks an egg into a wide, stainless steel bowl. But he's not an aspiring chef. His name is Emmanuel Quaidoo, and he's a first-year medical student. Quaidoo is working on a spinach and feta frittata, one of the healthy breakfast alternatives he has learned to make.

Quaidoo and about a dozen of his University of Chicago classmates are here on a stormy spring night taking a culinary nutrition class they won't even get credit for.

Just What The Doctor Ordered: Med Students Team With Chefs

Their medical school — like most across the nation — doesn't offer this kind of hands-on training. In fact, only about a quarter of American med schools offer the 25 hours of nutrition training recommended — but not required — by the National Academy of Sciences.

So the students are here at night learning from Drs. Sonia Oyola and Geeta Maker-Clark. Maker-Clark did study culinary medicine. But it wasn't at med school.

"This training was something that I pursued on my own after I graduated from residency," Maker-Clark says. "I really received none of that kind of nutritional information during medical school."

So this spring, she and her colleagues launched a pilot based on a culinary medicine course taught at Tulane University. There, med students are required to take it.

The four-week culinary nutrition class in Chicago starts with about an hour on diet-related disease and how to treat it with food, followed by a healthy dose of hands-on cooking. Studies show this kind of personal experience makes doctors much more likely to pass along health and nutrition information to their patients. But no medical board requires doctors to study it. 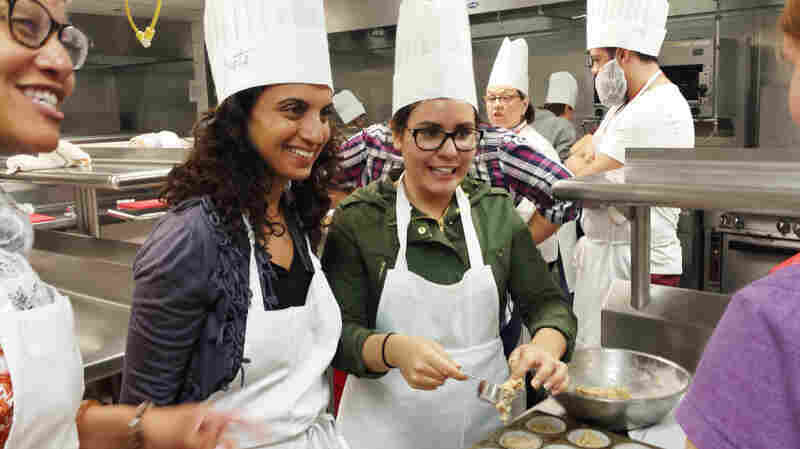 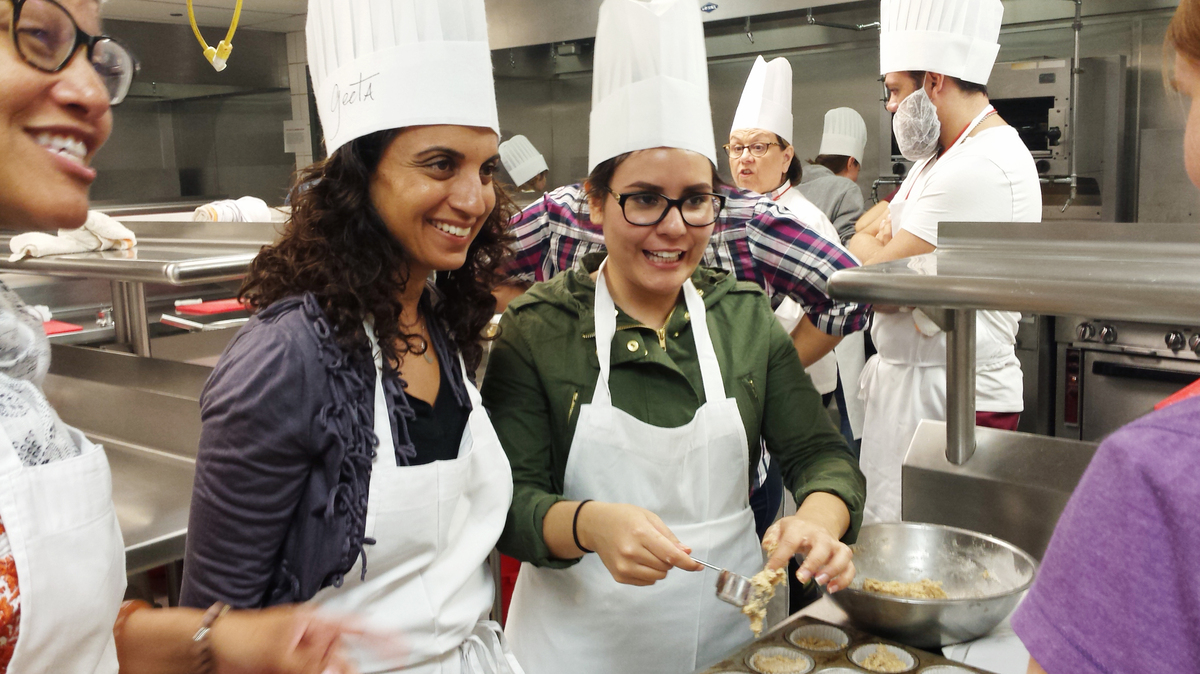 Dr. Geeta Maker-Clark (center) talks to medical students during a culinary medicine class she co-taught with Dr. Sonia Oyola (left) this spring in Chicago. On the right, student Maggie Montoya.

Those governing the first four years of med school say this kind of training is really more appropriate for later residency programs. But Mary Leih-Lai, who oversees residency standards at the Accreditation Council for Graduate Medical Education, says no, it's not their job either.

"We don't dictate the detailed requirements," Leih-Lai says. "We leave it up to the programs."

But few programs are eager to add these courses on their own. And that buck passing frustrates Stephen Devries.

"I did a four-year, extra-intensive training program in cardiology and didn't receive one minute of training in nutrition," Devries says. "That's gotta stop."

A few years ago, Devries left his cardiology practice to lead the Gaples Institute, aimed at expanding nutrition training in medicine. This summer he's launching an online nutrition course for doctors. But he also wants to reach students. So he recently met with fellow nutrition advocates who want to add nutrition questions to medical board exams, change accreditation standards and tie medical training grants to nutrition education.

David Eisenberg, with the Samueli Institute and the Harvard School of Public Health, was also at the summit. He says he's also frustrated by the situation but sees it largely as a slow institutional response to what he calls a tsunami of obesity and diabetes.

"I don't think we could have predicted that health care professionals would need to know so much more about nutrition," he says. "Nor did we expect that we'd need to know more about movement and exercise or being mindful in the way we live our lives or eat or how to change behaviors."

Back at the Chicago cooking class, changing behaviors is exactly what they're trying to do. In just two hours, students like Erik Kulenkamp have mastered 12 new dishes to share with patients. "We don't get a lot of devoted curriculum time to this issue," Kulenkamp says. "I feel like it's one of the things that patients are most curious about and have the most questions about: things that they can do to prevent things from happening rather than treat them once they occur."

For now, this class is just a small, grant-funded pilot, but Maker-Clark envisions a day when it's standard fare at all American med schools.