Accessibility links
Aphrodisiacs Can Spark Sexual Imagination, But Probably Not Libido : The Salt Going on a picnic with someone special? Make sure to pack watermelon, a food that lore says is an aphrodisiac. No food is actually scientifically linked to desire, but here's how some got that rep.

Listen · 3:55 3:55
Aphrodisiacs Can Spark Sexual Imagination, But Probably Not Libido 3:55 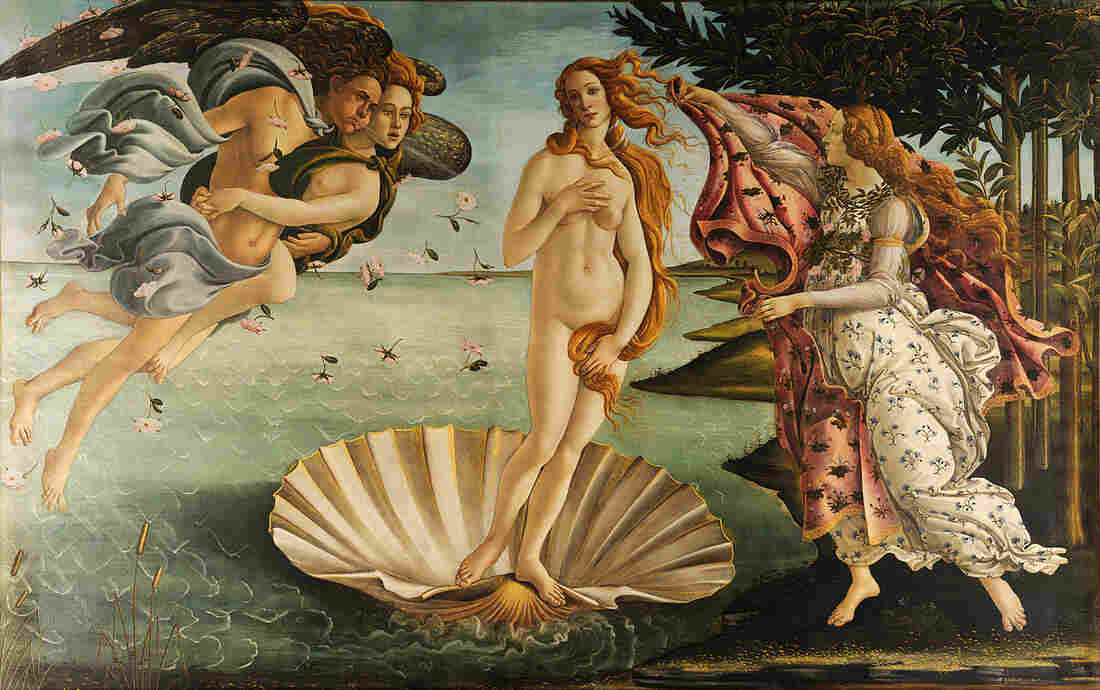 The Birth of Venus, by Sandro Botticelli, depicts the goddess of love floating on a giant scallop shell. The word aphrodisiac derives from her Greek name, Aphrodite. Sandro Botticelli/Wikimedia hide caption 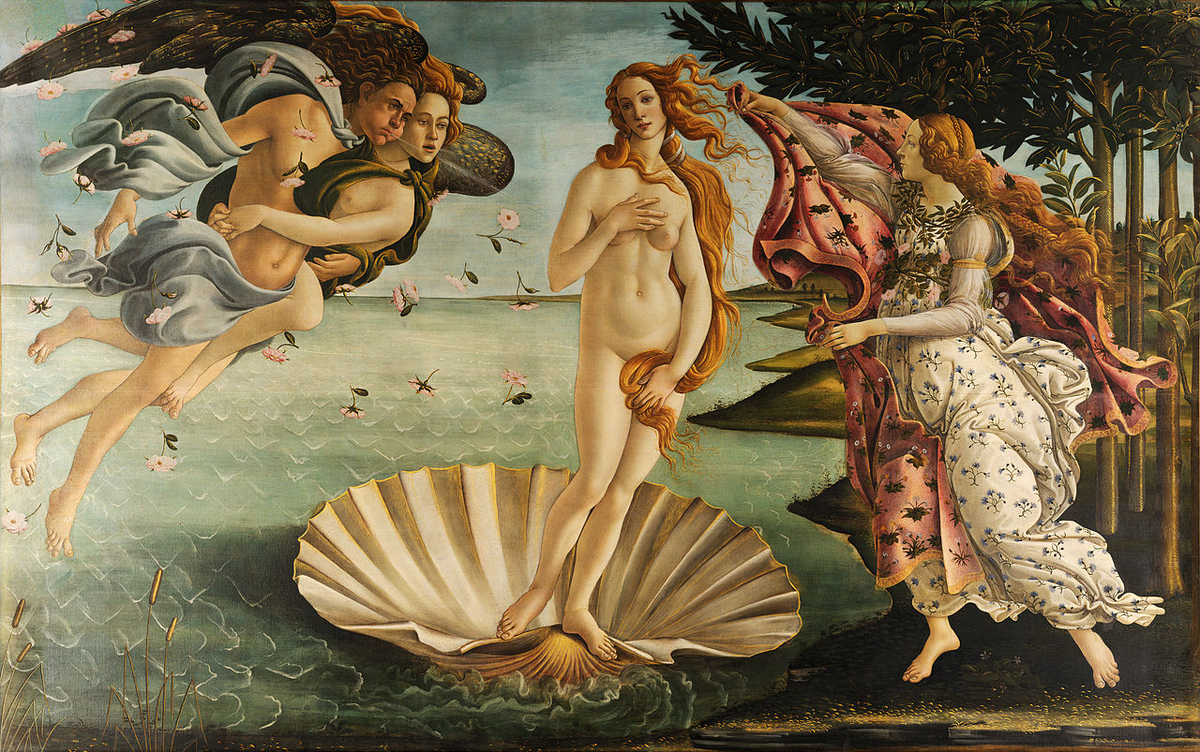 The Birth of Venus, by Sandro Botticelli, depicts the goddess of love floating on a giant scallop shell. The word aphrodisiac derives from her Greek name, Aphrodite.

What do we know about the power of food to rev up sex drive? Not much.

"Really, science has not figured out what determines sexual motivation and sexual attraction. If we knew the answer to that, we'd probably be richer than Pfizer after they invented Viagra," says Dolores Lamb, director of the Center for Reproductive Medicine at Baylor College of Medicine.

She hasn't seen any compelling evidence that any particular food can intensify desire.

Lamb is a men's health researcher and knows a lot about the intricacies of male plumbing, but she says desire is largely psychological. Even medicines that treat erectile dysfunction can't create enthusiasm.

"So the trigger still has to be up in the brain," Lamb says.

Still, the idea persists that ginger stirs up lust, or that hot peppers make you hot.

"Probably for some folks they do, and it's certainly fun to try," Lamb says.

Some legendary aphrodisiacs do have a chemical here or a nutrient there that might support sexual health, but not enough of it to make an immediate difference in the bedroom.

Red, juicy watermelon, for example, contains the amino acid citrulline, and that plant nutrient is healthy for erectile tissue in both men and women. But most of the amino acid is found in the rind of the fruit.

Consider chili peppers. Capsaicin, which is what provides the heat in a jalapeno, also raises your metabolism and releases feel-good endorphins.

"You get kind of a chill down the back of your neck and kind of a tingly, good sensation," Lamb says. "Gets blood flowing better."

And maybe what people are experiencing is the power of association, suggests Susana Mayer, a clinical sexologist in Philadelphia. "Maybe while you are eating those hot peppers, your brain remembers those feelings and goes, 'Oh, I had a similar experience, except I was horizontal and not vertical, and I was with my lover.' And so, you start making those associations," says Mayer, who specializes in helping clients connect with their libidos.

"I asked them: Had anybody ever experienced the effects of an aphrodisiac, of a food that was considered an aphrodisiac? Not one hand went up," Mayer says.

People at the discussion group did say they've gotten turned on when they watch an intimate partner eat, and that suggests a whole different category of aphrodisiacs that remind us of our anatomy. For example, avocados grow in pairs — literally, two globes of ripe, low-hanging fruit.

Food scientist Cathy Kapica says that sexual innuendo may be the most important active ingredient in any aphrodisiac. That, or culture.

"In ancient Persia, for example, young couples would sit under pistachio nut trees, and if they could hear the nuts cracking open, that would mean they would have a very happy life together. So in that part of the world, the pistachio nut is considered the love nut," says Kapica.

In the slim research that exists on aphrodisiacs, fertility and sexual function become a proxy for desire. In one study, researchers fed saffron to men, then evaluated "tip rigidity" and "tumescence," a measure of how swollen something gets. That study, and most others, end with the conclusion: "More research is needed."

Kapica is a nutritional consultant, and through her company, the Awegrin Institute, she analyzes ingredients for large food companies. The big thing that "love foods" have in common is that many of them were once considered rare or expensive, she says. Think about champagne, dark chocolate, saffron and oysters.

"When do you eat oysters? Usually, when you go out. It's a special occasion, you're with that special someone. Maybe you order oysters to impress them," Kapica says.

Oysters are also a good source of zinc, and zinc is important to sperm production. It makes sense, then, that oysters got a reputation for boosting sexual prowess, but Kapica says that doesn't make it science.

"They don't have any superpower that's going to make you a superlover," she says.

Still, it's fun to try, and sexologist Susana Mayer was willing to sample a few oysters at the Oyster House in Philadelphia.

Aphrodisiacs are named after the Greek goddess of love, Aphrodite — known as Venus to the Romans. According to myth, she was born from the sea foam, which is why Botticelli's famous painting of her, The Birth of Venus, shows her floating on a giant scallop shell. Oysters are most notorious for making people randy, but clams, scallops and other seafood that resemble a sex organ also have that reputation.

Perhaps that's why couples sometimes canoodle at the seafood bar.

"We also have quite a few gentlemen — it's always older gentlemen — that ask us, 'Please make sure one of these works,' " says Oyster House owner Sam Mink.

When Mayer looks around the restaurant, she says that she suspects there's some kind of arousal feedback loop that happens when you see an oyster slip between someone's lips.

The look of oysters didn't do anything for Mayer, but the so-called "slimy texture" turned out to be pleasant.

"It feels quite refreshing. They're cold, and these in particular have a nice, almost sweet taste to them," she says. Just like the scientist, the sexologist says the power of aphrodisiacs is mostly about belief and anticipation.

Sexual health expert Dolores Lamb says that sharing food is often a prelude to intimate moments because it leads to intimate conversation, and that helps create an emotional bond.

That is sexual satisfaction in the fullest sense, she says.