Accessibility links
What To Do With Weird Farmers Market Vegetables : The Salt The market in July is a wondrous place: juicy tomatoes, jewel-toned eggplants, sweet yellow corn. But greens that look like weeds may be more intimidating. Here's how to tame them. 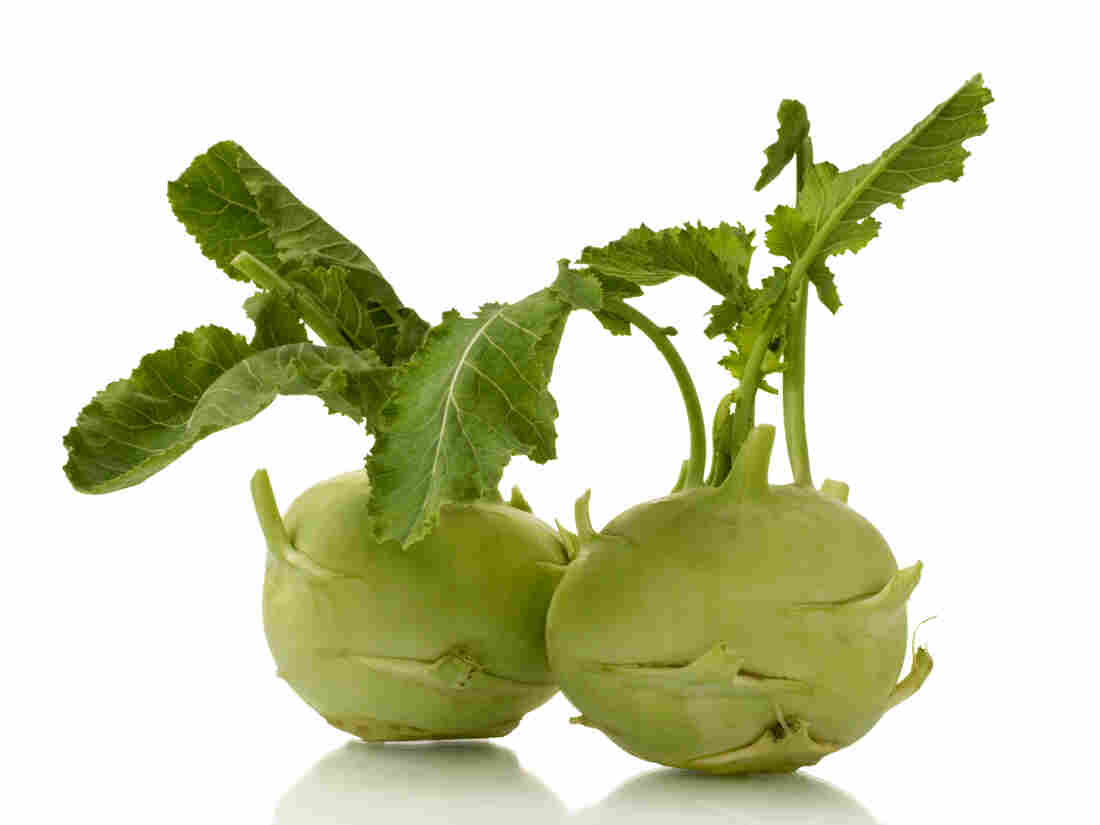 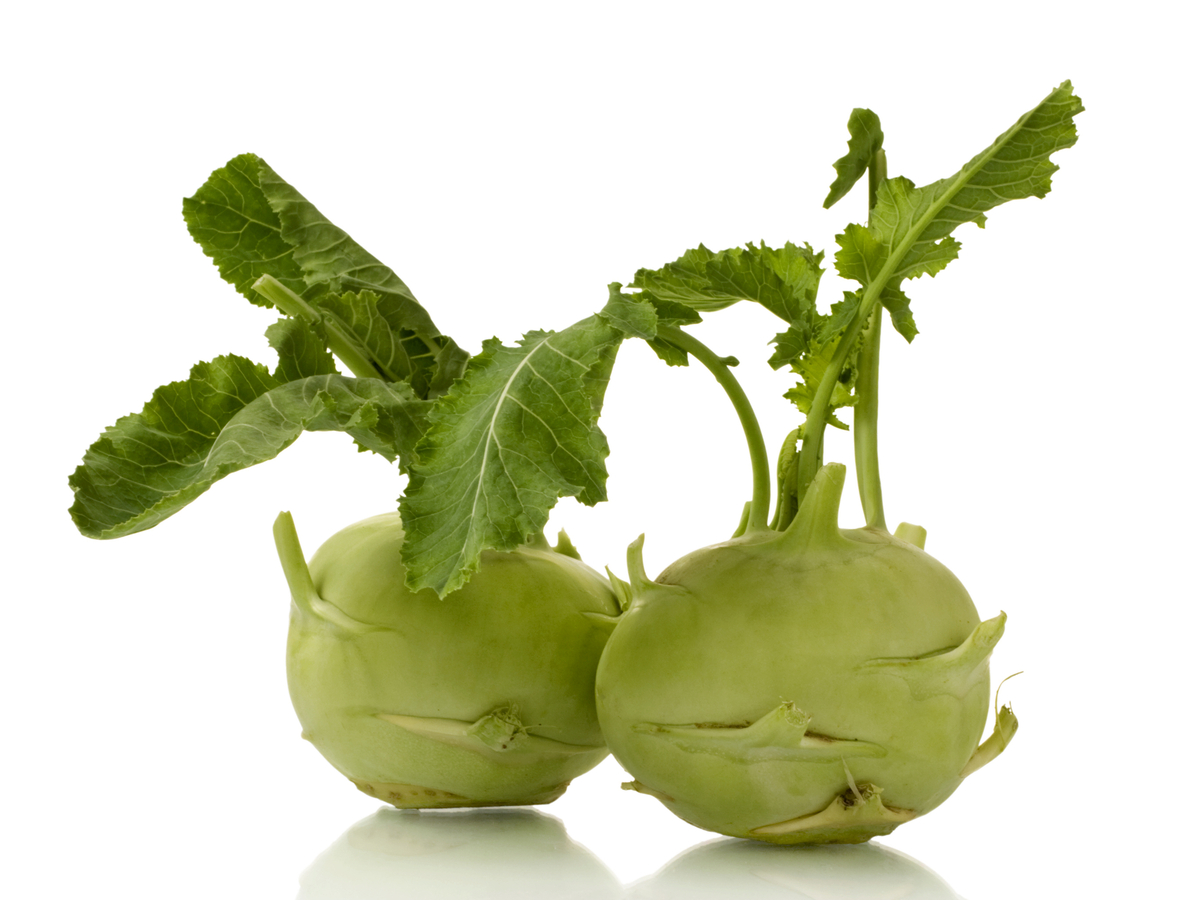 Kohlrabi, peeled and sliced, is refreshing, but lightly poached is good too, says chef April Bloomfield.

Walking through the farmers market this time of year is a wondrous thing: juicy tomatoes, rows of jewel-toned eggplants, fragrant basil and sweet yellow corn. But then, you see bunches of greens that look like weeds, stuff with names like kohlrabi and purslane, and suddenly, you feel intimidated. Other people know what to do with these greens, why don't I?

Fear not. As Chef April Bloomfield explained to Weekend Edition's Lynn Neary, these more-unusual vegetables can be turned into a delicious dinner. Bloomfield runs two Michelin star restaurants, and her latest cookbook is called A Girl and Her Greens.

The first intimidating vegetable she addresses is kohlrabi. It's a pale green bulb that comes into season in October, with tough-looking leaves sprouting from the top. But its appearance is deceiving.

"Kohlrabi is very firm and very crisp," Bloomfield says. "And actually, doing nothing more than peeling it and thinly slicing it is ideal. I mean, it's so refreshing. But it's also good just slightly poached in a little bit of salt and some butter." She explains that after you get past the thick stalk and peel back the skin, poaching the flesh makes it extremely creamy.

One market mystery, solved. But what about the greens that are out there right now? In peak season they can make kale look boring.

Bloomfield says you can use them interchangeably or just mix them together. "I love nothing more than making a lovely salad of purslane," she says. If you have kale or watercress, mix it in, she suggests, along with anything else that's green. "Just kind of tossing those in a bowl with some salt, maybe some lemon and olive oil, or going a step further and getting some really delicious red wine and tossing that all together and shoving that in your mouth on a hot summer's day is perfect," she says.

You Can't Judge A Celery Root By Its Looks

One of the recipes in Bloomfield's new book features young peas, turned into a kind of pesto.

"When these peas first come in season, they're really tender and quite sweet," she says. The recipe is simple: just shell the peas and puree them with a little bit of Pecorino, a little bit of garlic, and some mint. "It really is just quite refreshing," Bloomfield says. "And it just kind of brings your soul and your palate alive after a long, hard winter. "

She suggests serving the pea mixture with heavily charred toast that's been rubbed with garlic, drizzled with olive oil, and sprinkled with a little salt. "And just kind of slather the peas on there. There's something about the crunch of the toast and the delicious spicy olive oil that makes it very elegant and it cuts through that sweet pea that you've just pureed," Bloomfield says. 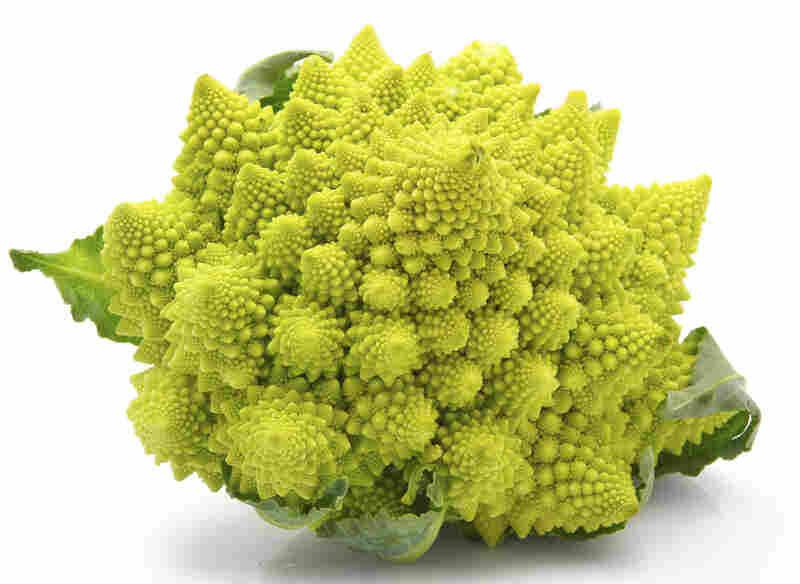 Next up: Romanesco. It's a strange-looking, neon green fall vegetable, but don't let that fool you: It's actually a cauliflower.

There's a recipe in Bloomfield's book for Romanesco, as well. "I just basically pot roast it with anchovy and tomato and a little bit of rosemary," she says. "And the combination of the tomato, rosemary, and anchovy really makes it quite substantial. It's a very great dish just to have with a lovely, vibrant salad on the side."

So before you even get to the cooking stage, when you're still there in the market, if you're confronted with a big sea of green, and you cannot tell the difference between one and another, what's the best way to proceed?

"Just ask around," Bloomfield says. "It's always fun and it gets you connected. It makes you connected to the food and it gives you that extra story to tell at the dinner table."