Accessibility links
Cooking Across America, Nigerian Pop-Up Chef Spreads Taste Of Home : The Salt Tunde Wey wanted to share the food of his West African childhood. So he crossed the U.S. by bus, hosting pop-up dinners along the way. But Wey, like many immigrants, found success can unravel quickly. 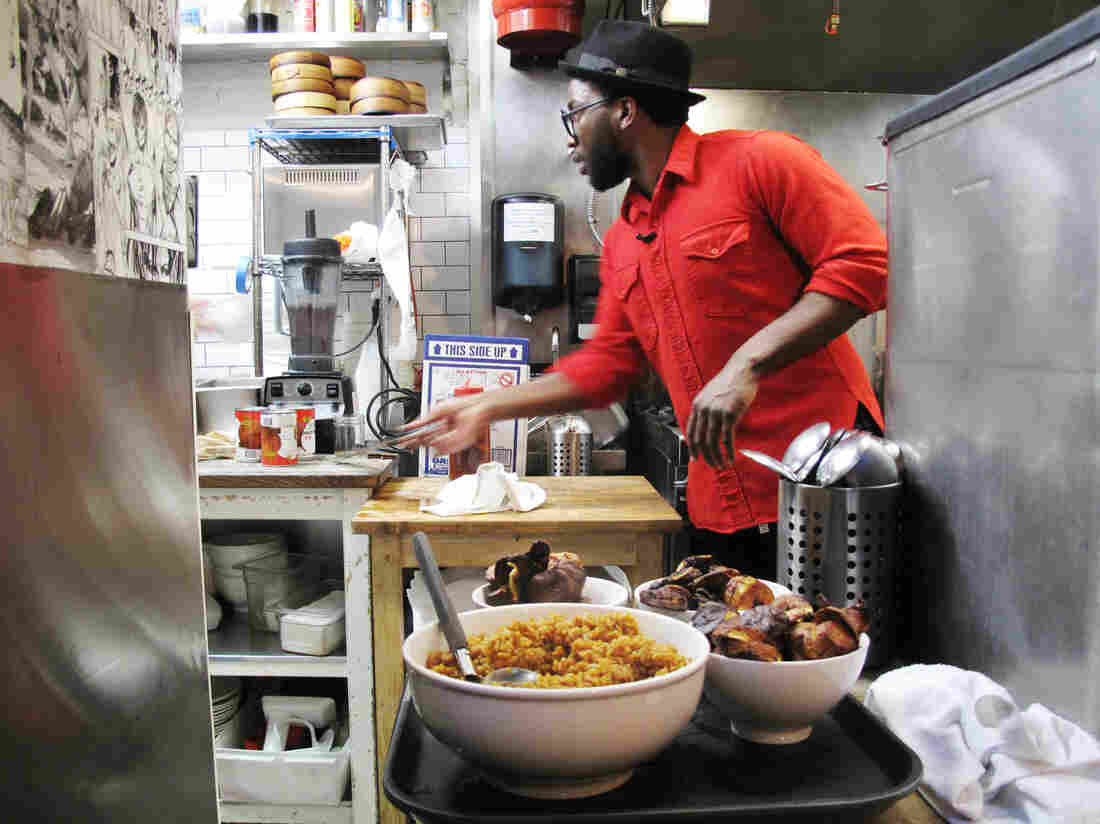 Tunde Wey gets ready to serve plantains and Jollof rice at his pop-up Nigerian dinner in the kitchen of Toki Underground, a ramen restaurant in Washington, D.C., in December 2014. Eliza Barclay/NPR hide caption 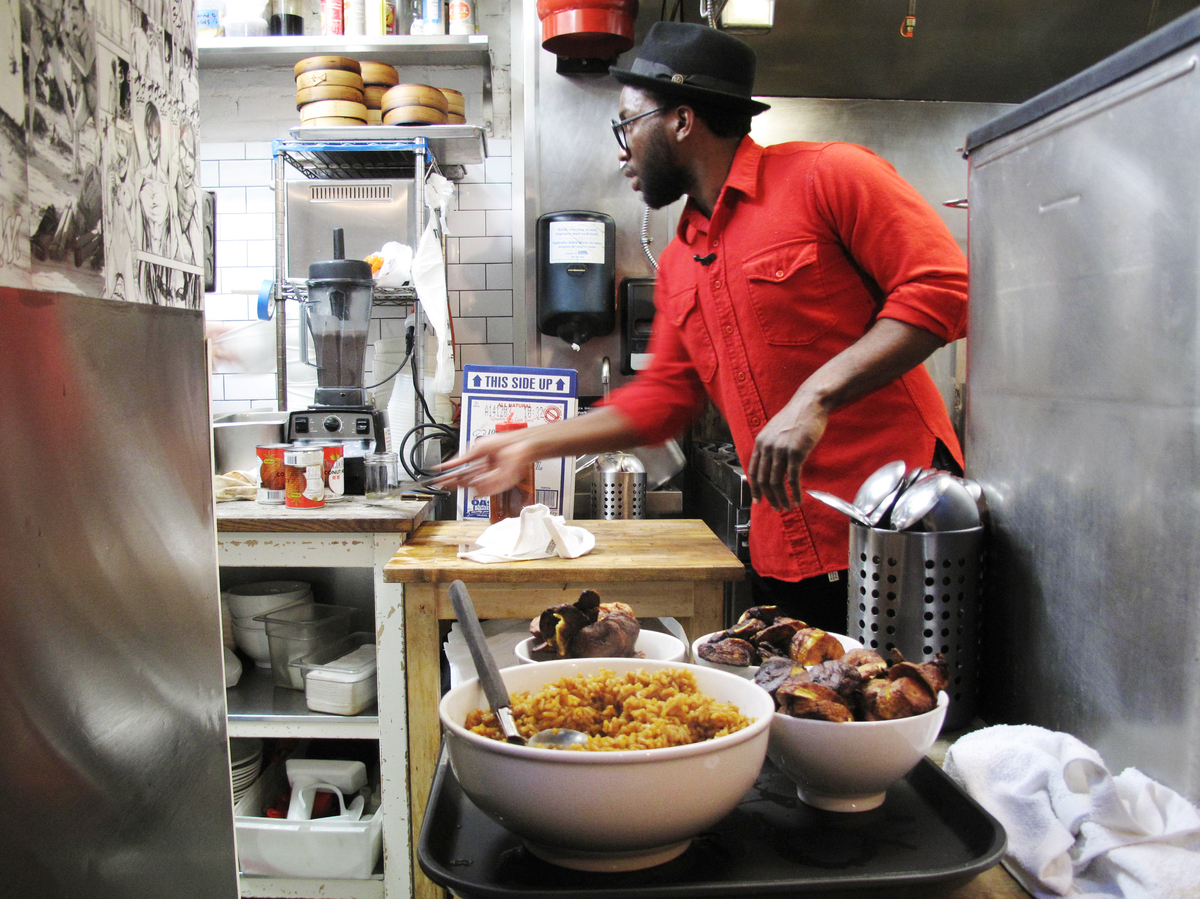 Tunde Wey gets ready to serve plantains and Jollof rice at his pop-up Nigerian dinner in the kitchen of Toki Underground, a ramen restaurant in Washington, D.C., in December 2014.

Most aspiring chefs long for the white hat, the gleaming kitchen, the fancy menu.

But Nigeria-born Tunde Wey stumbled into a different version of the (American) chef's dream. He wanted to see the country and share the food of his West African childhood with friends and strangers along the way.

So a few months ago, he packed up his knives and his spices at his home in Detroit and started crisscrossing the U.S. by Greyhound bus.

He wowed diners in New Orleans, Chicago and Buffalo with his one-man pop-up dinner events, Lagos, named after his hometown in Nigeria. He cooked his way up and down the East Coast.

Word got around. His one-night cooking gigs began selling out.

But then, like many immigrants to the U.S., Tunde Wey discovered how quickly success can come tumbling down.

I caught up with him the day he was preparing dinner in Washington, D.C., and getting rhapsodic about his ingredients.

"Palm oil is like the sexier, more full-bodied oil to, like, regular cooking oil," he tells me. "It just has soul, you know."

Wey is kind of like a traveling showman. For every dinner party he throws in a new city, he has to scramble to find, and then borrow, a space. Sometimes it's a restaurant, sometimes it's a communal kitchen where food entrepreneurs smoke and bake and boil their wares.

On the day we meet up, he has taken over a restaurant called Toki Underground. Its stove usually has broth and ramen noodles simmering on it, but Wey has replaced them with a huge vat of goat head stew.

"Gonna be some eyeballs in this, and some mandibles — just the jaw of the goat," he says as he stirs. "People are going to eat some teeth today."

Wey has been at it since 9 a.m. It's now midafternoon, and he's moving between a blender, four massive pots slick with that sexy palm oil, and his spice bag.

"A doctor has a medicine bag; I have a spice bag," he says. 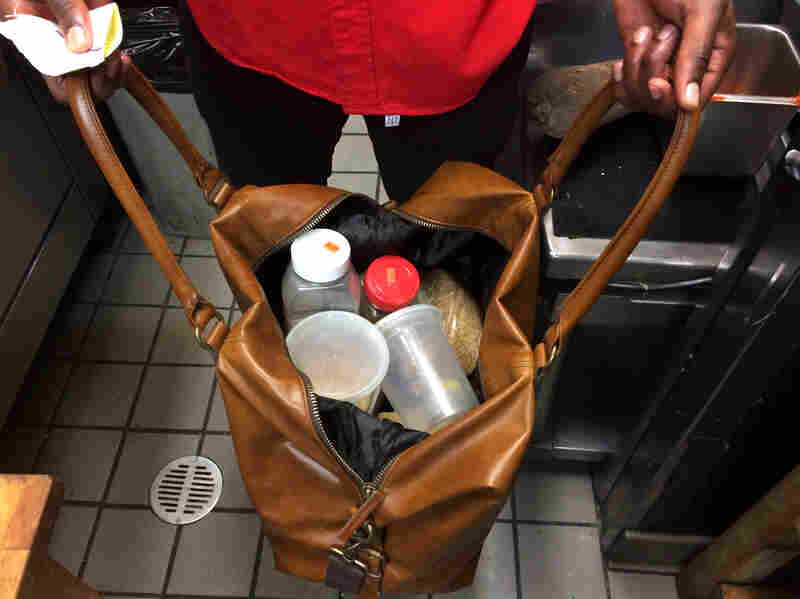 "A doctor has a medicine bag; I have a spice bag," Wey says. Eliza Barclay/NPR hide caption 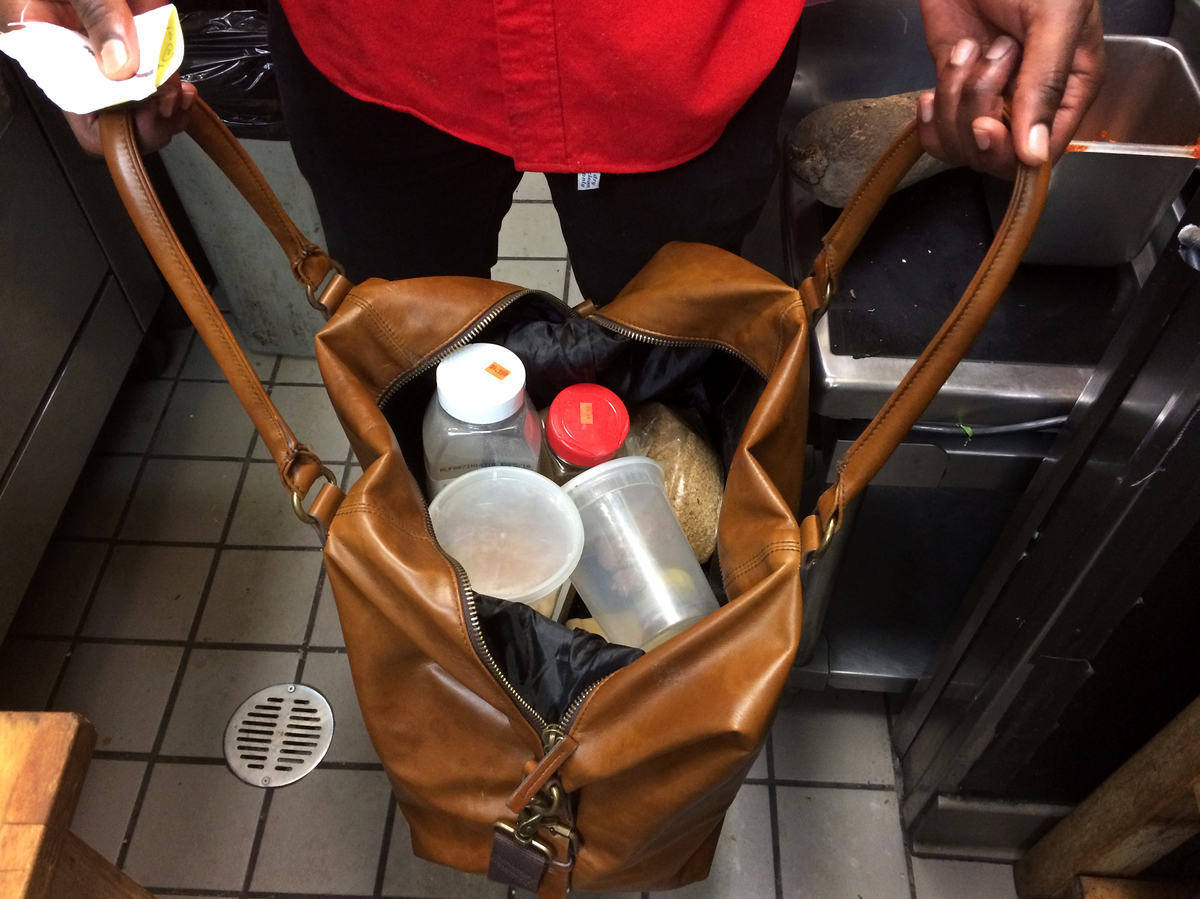 "A doctor has a medicine bag; I have a spice bag," Wey says.

This bag is Wey's most important prop, and it's filled with things like alligator pepper seeds, calabash nutmeg and uda, a kind of pepper.

"So all of this stuff is in here, and sometimes I'll have stock fish, which smells so bad," he says.

Wey never actually planned to become a chef. His parents dreamed that he would become a doctor, and they sent him to the U.S. when he was 16 to study science. But 15 years later, after a string of college majors and false starts, he realized he wanted to cook. He didn't have any formal training, though.

"I learned how to cook from watching my parents, my aunt, a lot of YouTube videos in between all that," he says. "The benefit that I have is that I grew up with this food, so I know exactly what it's supposed to taste like."

The idea for the Nigerian pop-up came to him after a brief stint at an American restaurant he co-founded in Detroit called Revolver.

As Wey spent more time in the kitchen, he found that he missed his family more and more — he hadn't seen his parents and his eldest brother back in Nigeria for seven years. So as he planned the pop-up, he turned to his parents for help with everything from recipes to music.

"My family was interested in the details of the business, and I had these conversations with them," he says. "And I felt more connected, actually, infinitely more connected."

And he shares that connection when he makes his food for other people.

"When I was younger, my mom used to give me kisses on my cheek, and she would be like, you know, be all sloppy and I would do the same. Just that feeling of being kissed — I get that when I'm eating. So it's evocative; that's how food affects me."

And he hopes his diners will feel it, too.

When I met him in D.C. in December, Wey had been on the road cooking for two months. And he'd pretty much got his rhythm down.

It's 7 p.m., and the show is on. "That spinach dish I am holding in my hand right now is absolutely amazing, and I would kill for the recipe," says Sarah Moulton. "And my mouth has burned off from the goat pepper soup." 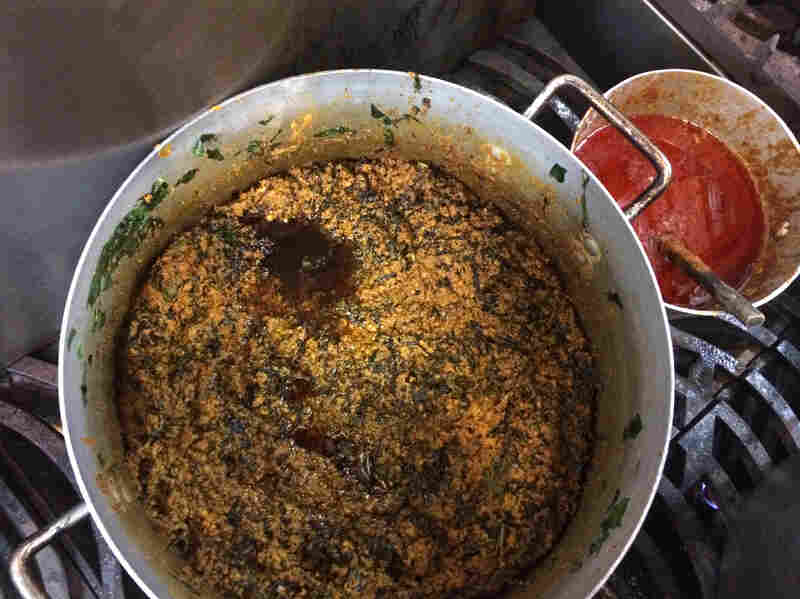 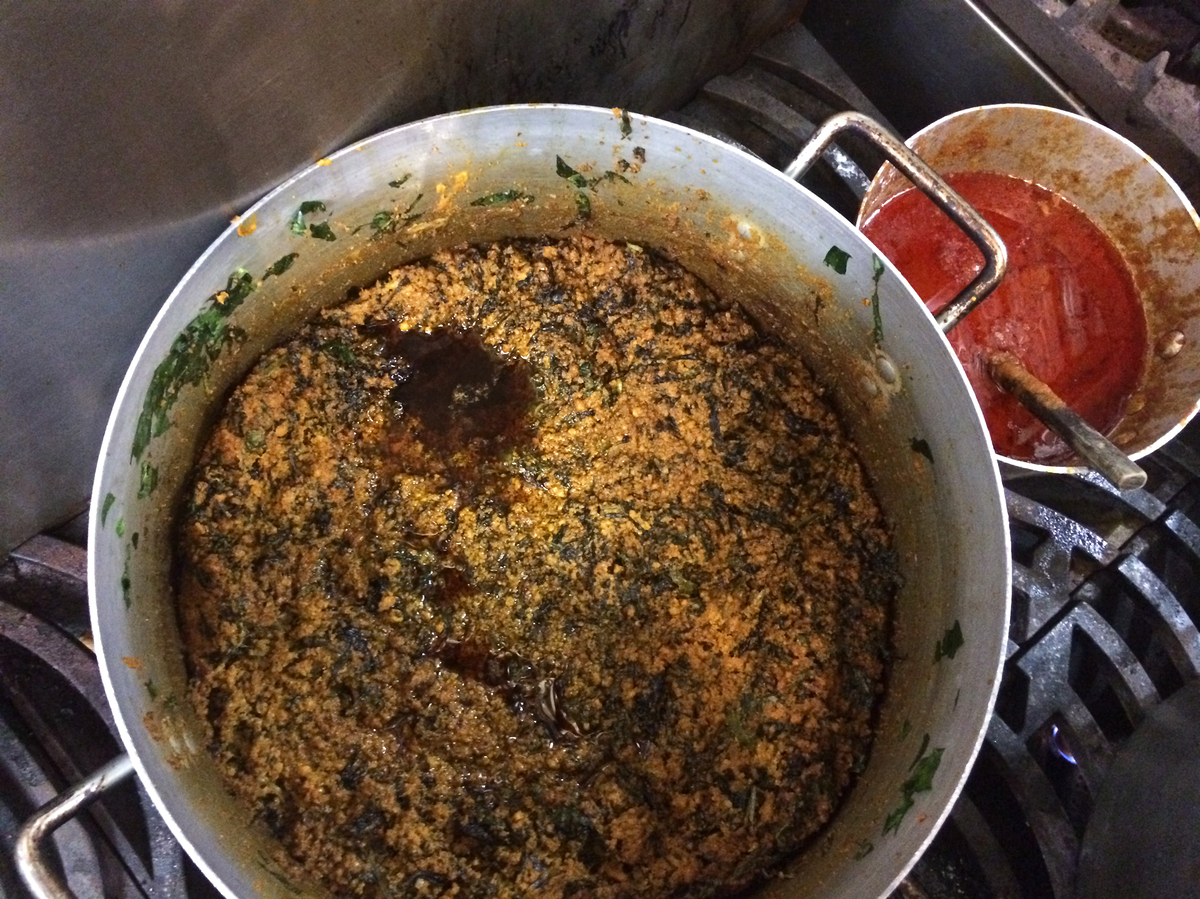 One of Wey's staple menu items is Jollof rice, made with rosy palm oil.

She's here with her friend Tiffany Farchione, who chimes in about the goat pepper soup: "It's hot and it hurts, but you still want more because it's so delicious."

And as for the goat head? Diner Dave Grossman pronounces it "delicious, expertly stewed, really quite thrilling."

That night, Wey was on a roll. He had a string of gigs lined up in several other cities, some seating up to 50 people at $55 a head.

Soon after, he got his biggest break: The celebrity chef Roy Choi invited him to his Los Angeles restaurant on Feb. 5. The New York Times' Sam Sifton told Wey he was flying out to be there.

But Wey never made it.

On the way to LA, when his Greyhound bus stopped outside of El Paso, Texas, Border Patrol agents climbed aboard. They were not impressed with his old Nigerian passport.

As Wey remembers it, "I had this uncontrollable chill; I was so cold. And there was so much adrenaline rushing through my body."

The thing was, back in 2007, while he was figuring out what to do with his life, he'd let his student visa expire.

"I just thought, I'll fix this: I'm going to go back to school, finish school, and adjust my status somehow," he says. "And so it was something I kept putting off."

But instead of cooking in LA, he was locked up in an El Paso detention center in early February for several weeks. Wey said it seemed like everything he'd built — from the pop-up to his life in America — was tumbling down.

But Wey has been lucky.

Almost half the people in the U.S. illegally are like him — they let visas expire. But Wey had a clean record and a network of friends and family. They raised $6,000. And so he wasn't deported, and he's now out on bail.

"I'm sometimes frustrated that it's limiting, but I mean, I'm comfortable with the reality that is my life," he says. "I'm not ashamed of it."

Because there's such a backlog in the immigration courts, Wey has a bit of a reprieve.

His next appointment with an immigration judge isn't until 2017. The judge will decide then whether he's allowed to stay. Or must go.

In the meantime, he's planning more dinners. And he has just opened a Nigerian food stall in the St. Roch Market in New Orleans.