Accessibility links
Coping With Cravings, And Other Tips On Eating While Pregnant : The Salt Pregnant women hear a lot about what foods to avoid, and little about what they should eat, a scientist found. So she wrote her own week-by-week guide that features salmon, chocolate and greens.

Coping With Cravings, And Other Tips On Eating While Pregnant

Coping With Cravings, And Other Tips On Eating While Pregnant 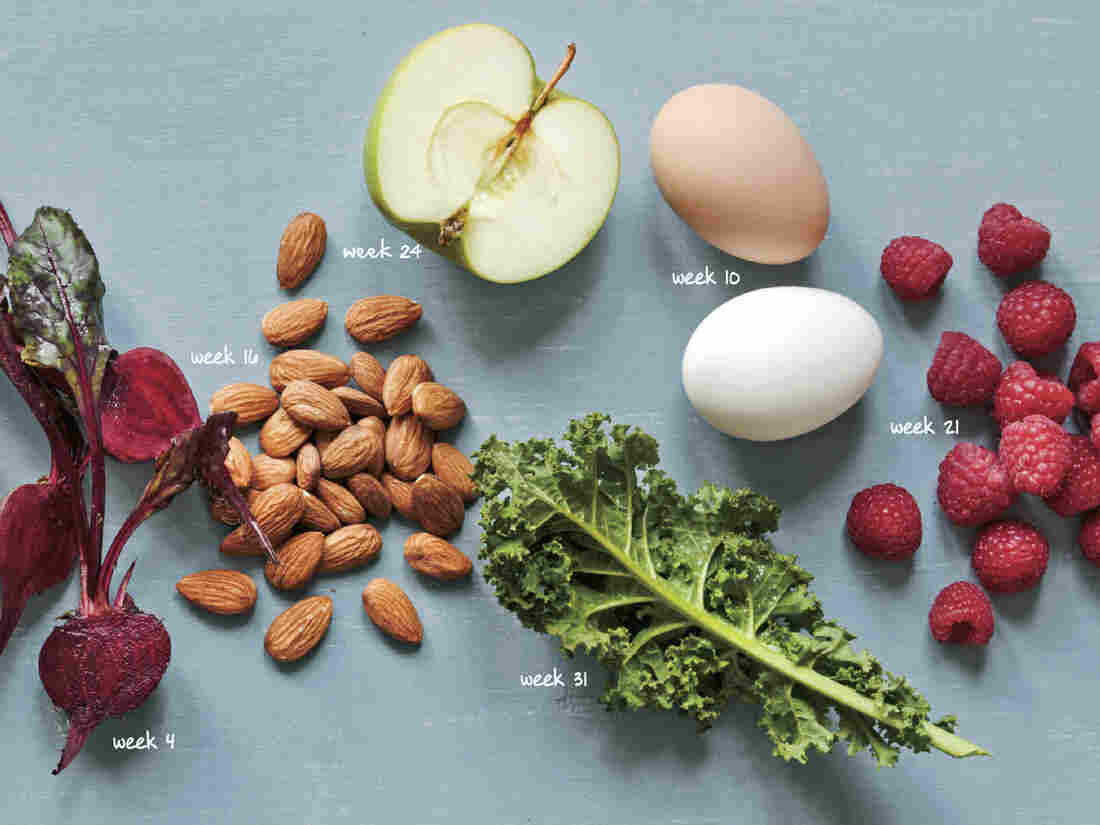 What to Eat When You're Pregnant by Dr. Nicole Avena guides women through the stages of pregnancy with suggestions for nutritious foods that support the baby's development. Courtesy of Ten Speed Press hide caption 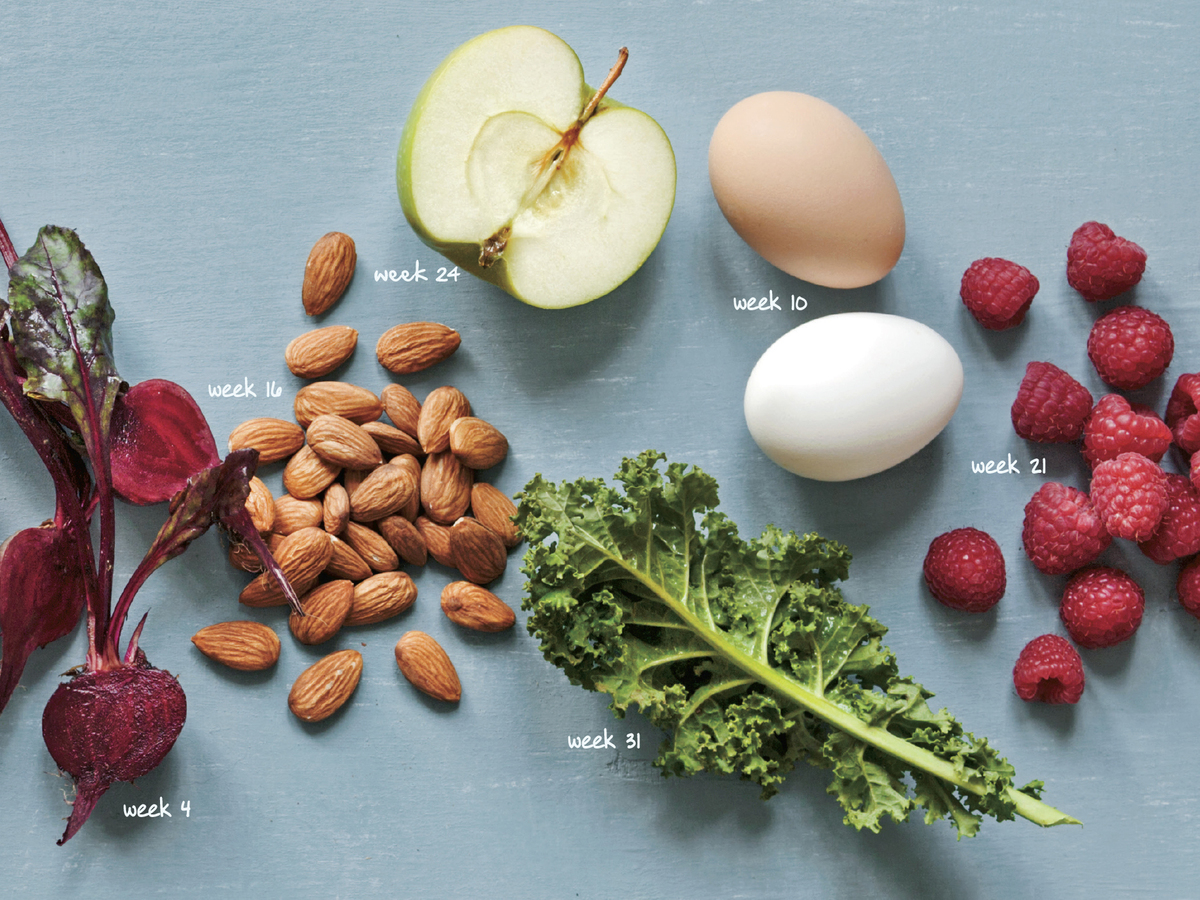 What to Eat When You're Pregnant by Dr. Nicole Avena guides women through the stages of pregnancy with suggestions for nutritious foods that support the baby's development.

Eating healthy in this day and age is a challenge. And the pressure is on if you're a pregnant woman given that you're eating for two.

But the nausea, exhaustion and mix of unpredictable hormones – not to mention the anxiety of preparing to go through labor and becoming a parent – make balanced nutrition pretty daunting.

I'm 27 weeks along now and even though I loved the second trimester (no more throwing up seemingly everywhere), I still found myself wondering what to eat and why. How much salmon is too much? Too little? And how on earth can I still be hungry?

Enter Nicole Avena, and her new book, What To Eat When You're Pregnant.

Refreshingly and straight-forwardly, Avena explains the science behind the food pregnant women need and when, week by week, they need it.

"There's plenty of information about things to avoid. I knew I shouldn't eat raw hot dogs and sushi," says Avena, a neuroscientist at Columbia University who specializes in nutrition, diet and addiction. "But it just seemed like there wasn't really anything beyond that in terms of what foods were good to eat and why."

So Avena, who wrote the book while pregnant with her second daughter (born in June), created an eating guide. She's organized it by week, highlighting a food that contains nutrients the baby needs at that stage in development. It's mostly fruits, vegetables and protein, but there's some fun thrown in, too. (Spoiler alert: week 17 is chocolate.)

I'm devouring this book in its small, digestible bites. In week 21, when nausea unexpectedly returned and eating anything seemed like a potential minefield, Avena's recommendation for raspberry smoothies was a welcome alternative to plain crackers and toast. And in week 22 when even the idea of cooking anything for dinner brought on an intense desire for a nap, her recipe for roasted broccoli, Brussels sprouts and carrot with paprika helped get me back in the kitchen. 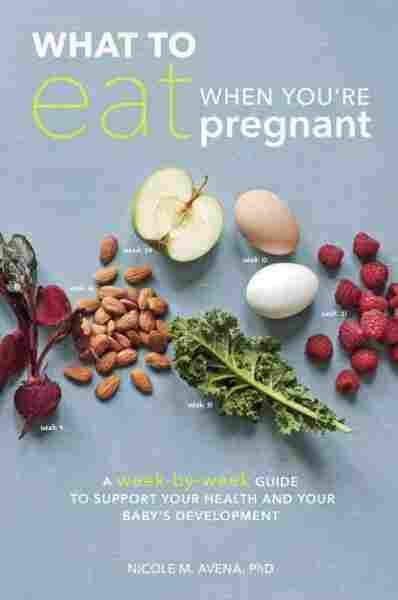 What to Eat When You're Pregnant

Title
What to Eat When You're Pregnant
Subtitle
A Week-by-Week Guide to Support Your Health and Your Baby's Development
Author
Nicole M., Ph.d. Avena and Georgie Fear

Avena says this was intentional: She focused on making the recipes in her book approachable, with familiar ingredients.

"You can't control a lot of things going on with a pregnancy," she says, "but you can control how you feel in terms of food."

Take cravings, for instance. Avena says they are no different in pregnancy than at any other time.

"The big [misconception] women have," she says, "is that if they get an urge for something it's the baby saying 'Oh I need carbs' or 'I need protein.' "

In fact, it's the environment that's usually cuing the brain to desire food, the same way it's cuing everyone else.

"You get this idea or memory or you smell a smell or see a commercial that reminds you of that food and you say, 'Oh boy I'd really like to have that right now,' " she says.

Hormonal fluctuations can make those cravings harder for pregnant women to control, but Avena says making excuses is a slippery slope.

"I don't think most women set out to eat for two," she says, "but I do think we often fall into the mindset of having the license to eat whatever we want because our budget in terms of calories has gone up now that we have a baby on board. And that's just really not the case."

In fact, she says, you don't need any extra calories during the first trimester. In the second and third you only need to add a few hundred each day, and that (unfortunately) doesn't mean ice cream. Avena says adding an apple with peanut butter to your day will do it.

When cravings do strike, she recommends trying to identify what exactly you're after. If it's crunch, then reach for carrots or almonds. If it's sugar, try frozen banana-chocolate-peanut butter bites (this recipe is close to the one in Avena's book).

And while controlling cravings can be a challenge, Avena says it's worth it in the long run to avoid excess weight gain.

"Until pretty recently the idea was the damage was being done to mom," Avena says. "So if mom gained 65 pounds when she's pregnant it's up to mom to lose 65 pounds."

But she points to recent research on what can happen to the baby when mom puts on too many extra pounds.

"All this extra weight may be affecting baby's brain development and how they're going to behave later in life," she says. "Studies – at least in rats – are suggesting that there are changes in the brain that occur when baby rats are exposed to excessive amounts of junk food during pregnancy that can alter the reward systems in the brain." And that could put a child at higher risk for obesity later in life.

OK, OK, but that doesn't mean you have to push aside all treats, right?

Not at all, says Avena. When she struggled with high blood pressure during her pregnancy she indulged in dark chocolate to help mitigate it. "If you focus on just eating good foods and stay away from the negativity associated with avoiding things," she says, "it's going to make eating well so much easier and more enjoyable, and is certainly going to have health benefits for you and the baby."

Even a glass of wine or a beer with dinner is generally condoned nowadays. (Of course, check with your doctor first.)

"I've had friends and colleagues tell me that when they get close to going into labor and are getting really anxious, obstetricians or midwives will tell them to have a beer," Avena says. "A, it just relaxes them and B, it just sets you into this mindset of, 'OK I'm toward the end [of this pregnancy] and it's going to be OK.' "

Nicole Beemsterboer is the senior producer of NPR's investigations team.