Accessibility links
The 'Immortal' Homemade Yogurt That Traveled 'Round The World : The Salt An Indian immigrant in Oklahoma missed the yogurt she'd grown up with. So when she traveled to India, she brought some back to use to make it herself. Forty years later, that yogurt lives on. 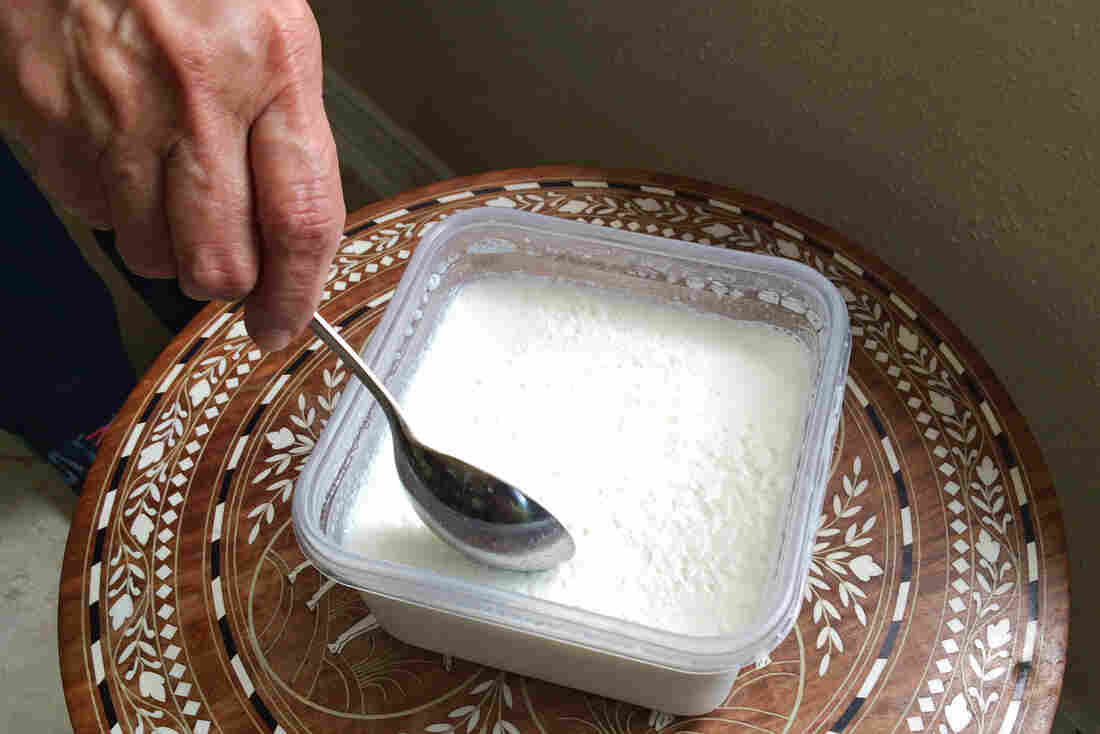 A recent batch of Veena Mehra's yogurt in Houston. She's been making yogurt the same way, with the same starter, for about 40 years. Courtesy of Nishta Mehra hide caption 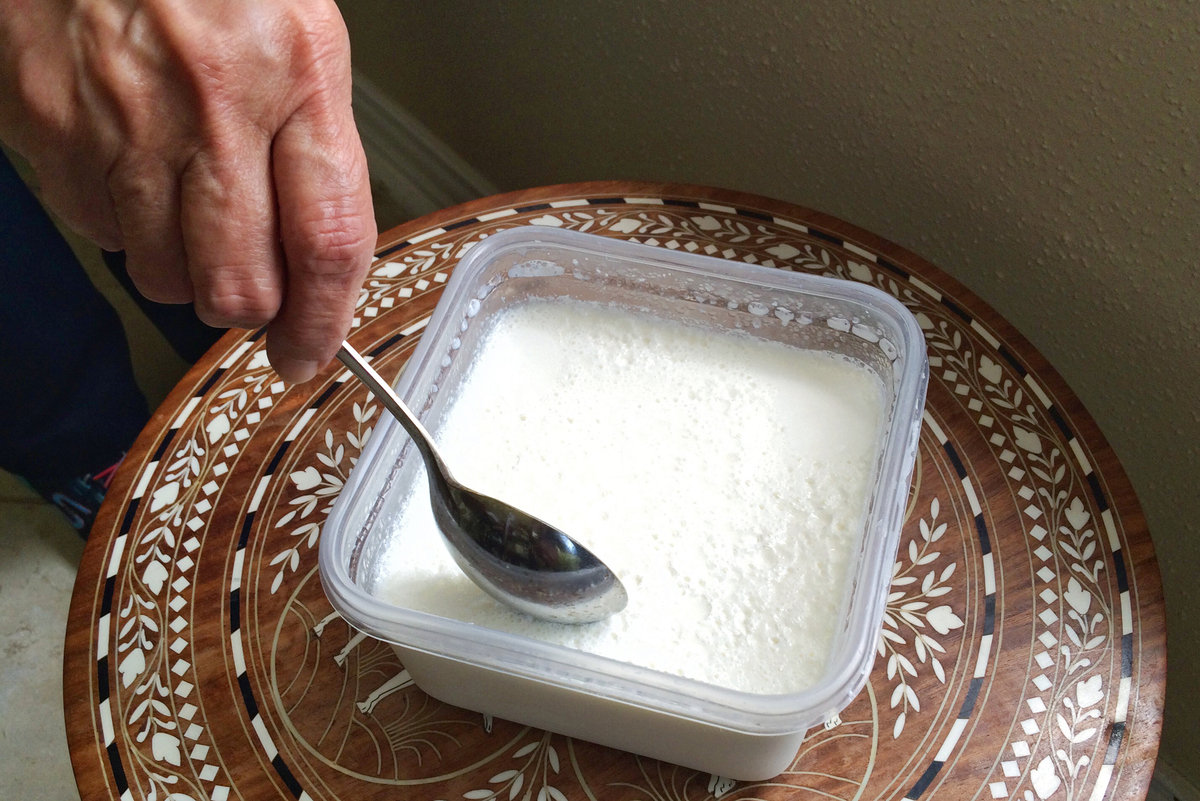 A recent batch of Veena Mehra's yogurt in Houston. She's been making yogurt the same way, with the same starter, for about 40 years.

As Dan Charles reported on Monday, yogurt has a way of igniting passions. In his story of arson, the flames were literal.

Once you start looking, it's really not hard to find people — even entire countries — deeply attached to this nourishing and calming food.

Back in 2012, I learned an amazing fact: With a little TLC, yogurt can essentially live forever. How? Because yogurt is swimming with billions of bacteria that are busy all the time (as long as the temperature is right) fermenting the sugar, or lactose, in milk into lactic acid.

If you're making your own yogurt at home, you need an old batch to make a new batch. And the community of microbes in that yogurt starter — and the flavor — should remain relatively unchanged if you make it the same way every time. That's what Rachel Dutton, an assistant professor of microbiology at the University of California, San Diego who studies cheese and other dairy products, says, anyway.

Of course, most Americans are in the habit of buying their yogurt at the grocery store. We like our yogurt sweet and mild.

But in many countries, like India, most yogurt is still made daily, even twice a day, at home. And that homemade yogurt tends to have a different flavor and texture — thicker and more sour — than the stuff made in a big yogurt factory. (For more on big yogurt factories, sit tight for Dan's forthcoming story on Wednesday.)

Veena Mehra, who emigrated to the U.S. from India, discovered when she first arrived in Oklahoma in 1970 that American yogurt wasn't like what she was used to eating back home.

"It just did not taste the same," she tells me. Her husband was studying at the University of Oklahoma, and there weren't any Indian groceries in Norman. "I tried buttermilk, and then I tried to use the yogurt I found at the store to make my own, but it just didn't work."

She continued to long for her homemade yogurt, so in 1975 or 1976 (she can't remember exactly what year it was), when she returned to Mumbai to visit her family, she decided to bring some yogurt starter back with her on the plane. 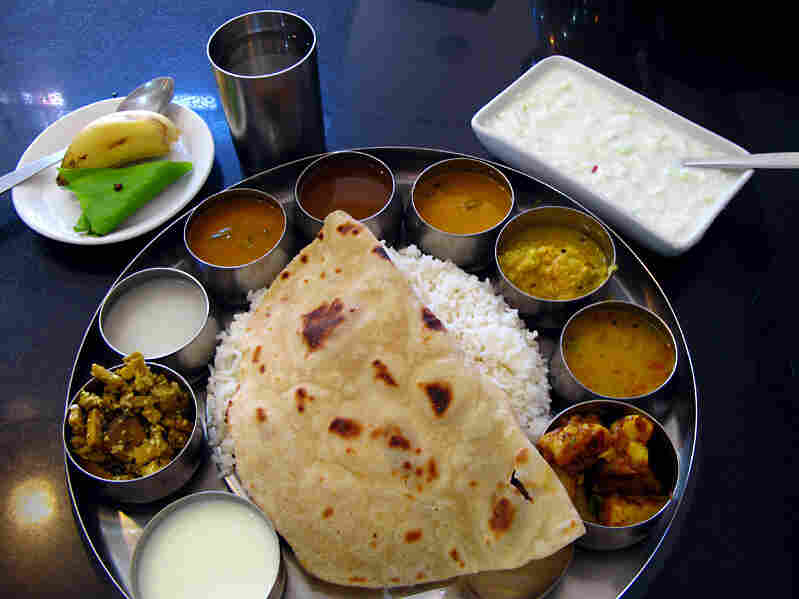 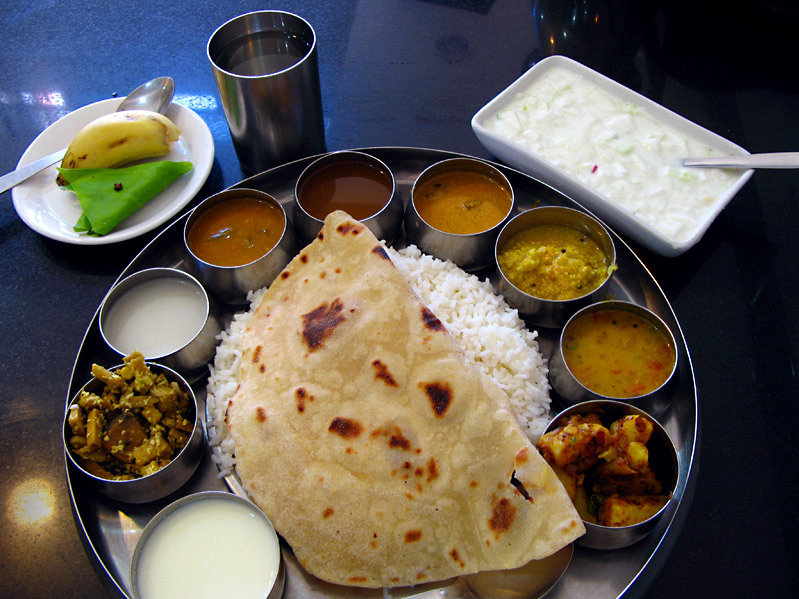 Cooling cucumber raita made with yogurt is a common accompaniment to spicy Indian dishes.

"I just put it in a container and then in my purse," she says. The yogurt survived the 21-hour journey to Memphis, Tenn., where they'd moved. Two days later, she was making yogurt again. And, most important, she says, "It tasted good: tart and thick."

Some 40 years later, Mehra, now 68, has kept that same starter going. She says she shared it with other Indian families in Memphis, and brought it with her when she moved to Houston three years ago after her husband died, to be closer to her daughter, Nishta, and grandson.

Nishta, who has a food blog called Blue Jean Gourmet, tells me she's also very partial to her mother's yogurt. "I think all of the American yogurt is really gross — I can't eat it," she says. "And I have this weird experience where I feel like my ancestors are looking down on me, and I can't bring myself to buy it."

And she's learned how to make it herself. "We make a batch every two weeks, or my mom makes a batch and brings it over."

Mehra says they both eat yogurt pretty much every day, in a classic Indian cucumber condiment called raita. Or they'll put just salt and pepper in it. And she says it tastes the same as it always did.

Each time she makes it, she follows the same simple process: She takes two cups of whole organic milk out of the fridge and lets it get to room temperature. Then she warms it over medium heat on the stove for 2.5 minutes. Next, she pours it into a plastic tub and adds a spoonful of yogurt from the old batch to the warm milk, mixing them together. Then she covers it with towels and puts it in the microwave (not to zap it, just to get it out of the way). The next morning, she's got her yogurt, and it goes back in the fridge.

The key to this method, of course, is that you always leave a little yogurt to make the next batch. And Mehra has managed to do that for 40 years.

According to Dutton, the microbiologist, it's plausible that Mehra's 2015 yogurt is very close, biologically and flavorwise, to the yogurt she brought over in 1975 or 1976. After all, to make yogurt, you really only need two species of bacteria: Streptococcus thermophilus and Lactobacillus bulgaricus.

"It's possible that the two species have been evolving over that time period, so maybe they're a little different, but they may be behaving in a similar way because you're always asking them to do the same thing," says Dutton.

In this sense, yogurt is different from a fermented food like sourdough bread. "Yogurt is much more controlled," she says, because you heat the milk and kill most of the microbes in it before adding the yogurt starter. So in theory, the only active microbes in the starter are the same ones that Mehra brought over from India four decades ago.

Sourdough, meanwhile, would adapt to a new place much more quickly because you have to add grain to starter, Dutton says. The grain, unlike the milk, hasn't been heated and could be carrying new, local microbes.

Want to try making your own flavorful yogurt at home? If you don't have a neighbor with heirloom yogurt like Mehra's who can share a spoonful, you can buy heirloom starter. It will probably yield a better yogurt than using store-bought yogurt because the bacteria in industrially produced yogurt can't regenerate very long — maybe just for a generation or two.

Heirloom yogurt, however, can theoretically live forever in good hands.