Accessibility links
Hey Yogurt-Maker, Where'd You Get Those Microbes? : The Salt Making yogurt requires bacteria — but which strains of bacteria? There are dozens to choose from, and that choice affects yogurt's tartness and texture. 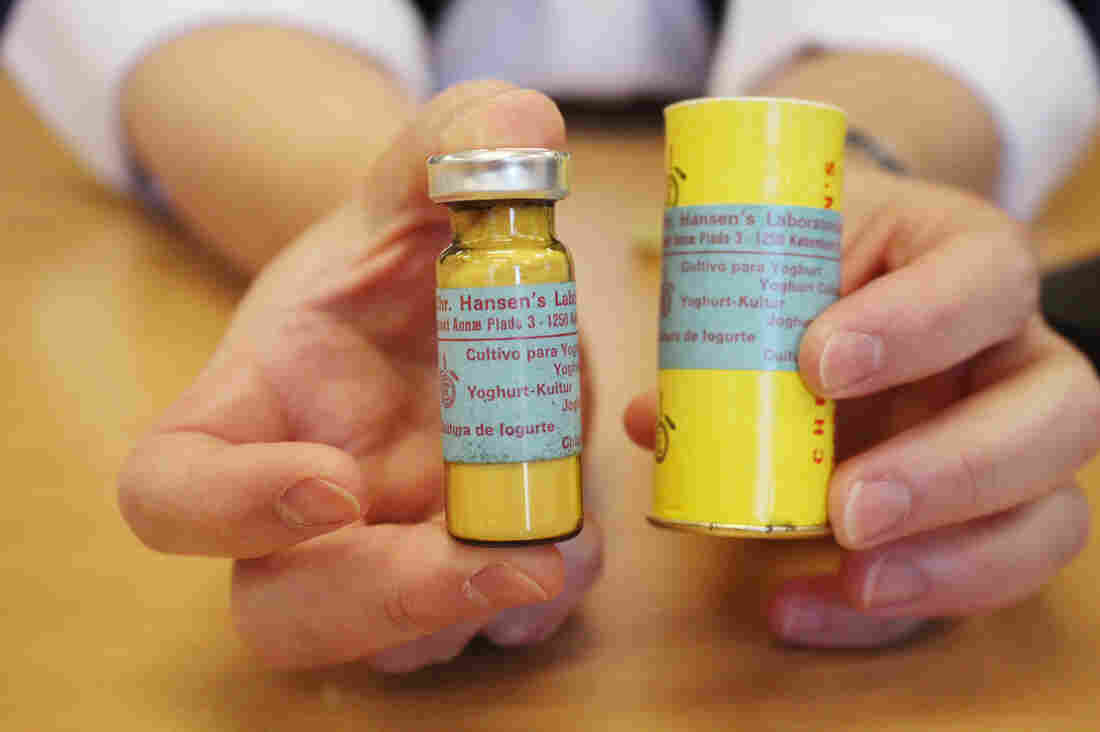 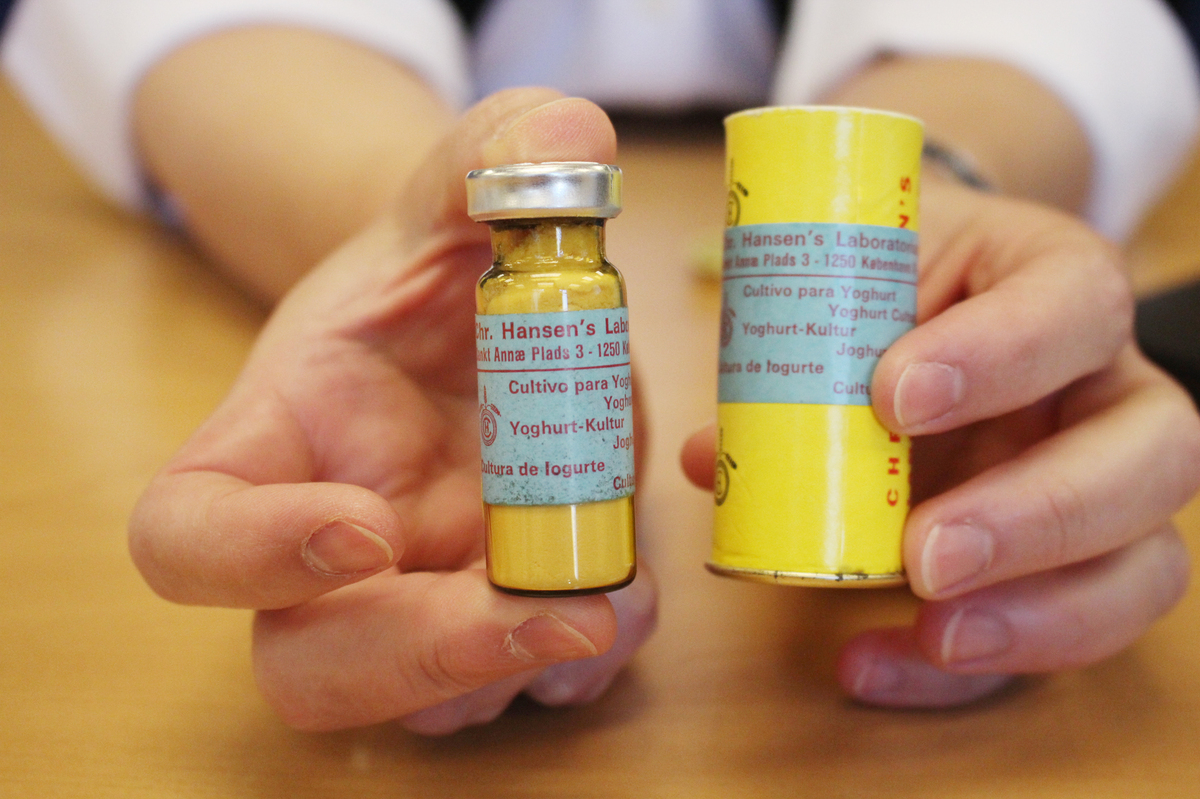 Yogurt is a truly living food. The bacteria that transform milk into this thick and sour food also provide a sense of mystique.

For Atanas Valev, they carry the taste and smell of his homeland, Bulgaria. "It's just the smell of the fermented milk. It's tart, tangy tart. That's what yogurt should taste like," he says.

The secret to that taste, he says, is the bacteria that Bulgarian yogurt-makers have used for thousands of years. So when he flew to the U.S. in 1991, he brought with him, in his luggage, two jars of those precious bacterial cultures.

"It was homemade yogurt in Bulgaria," he says. "Sheep milk yogurt. I got it from a shepherd." He kept that yogurt and used it as a "mother culture" to make more, for himself and his friends.

The process is simple. Add yogurt to warm milk, and the bacteria in it multiply, consuming lactose and turning it into lactic acid. Gradually, the milk becomes more acidic and eventually sets in a gel.

Valev is now trying to bring the taste of his boyhood to America with his company, called Trimona Bulgarian yogurt.

Siggi Hilmarsson, founder of a company that makes, of course, siggi's Icelandic-style yogurt, has also tried to duplicate the taste of his childhood. "To begin with, I just bought yogurt off the shelf and tried to incubate the cultures from those," he says.

Many small yogurt companies tell stories of starting with bacterial cultures handed down from previous generations. "My uncle, a long time ago, got his own" yogurt-making cultures, says Hannibal Murray, operations manager of White Mountain Foods in Austin, Texas.

In fact, though, it's not feasible to carry out commercial production the old-fashioned way, using existing yogurt to inoculate each new batch. This process, called backslopping, is inefficient and can raise the risk of contamination.

If you're in the commercial yogurt business, you need a microbe manufacturer, and that means a company like the Danish firm Christian Hansen. Its North American headquarters is in Milwaukee.

Mirjana Curic-Bawden is the house expert on yogurt-making microbes at Christian Hansen. She, too, has childhood memories of homemade yogurt. "I grew up in Belgrade, in Serbia, and my grandmother lived by the Bulgarian border and she made yogurt by herself," she says. "My grandmother would be really proud of me. She never understood why I needed to go to school to make yogurt." 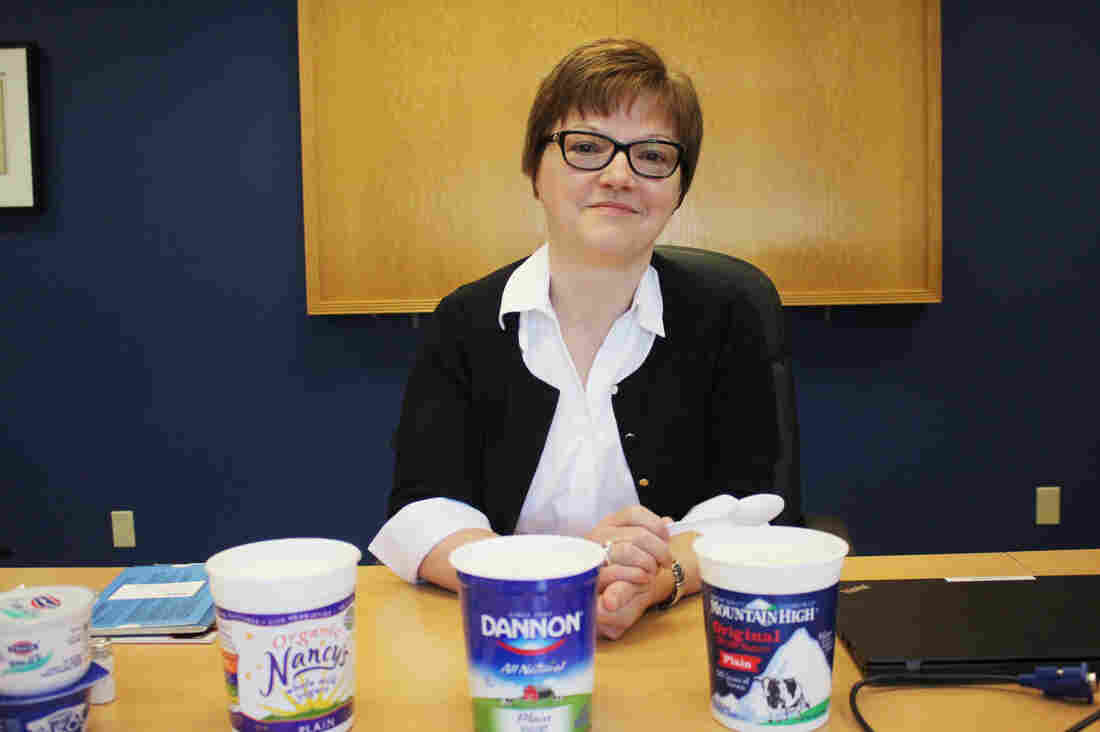 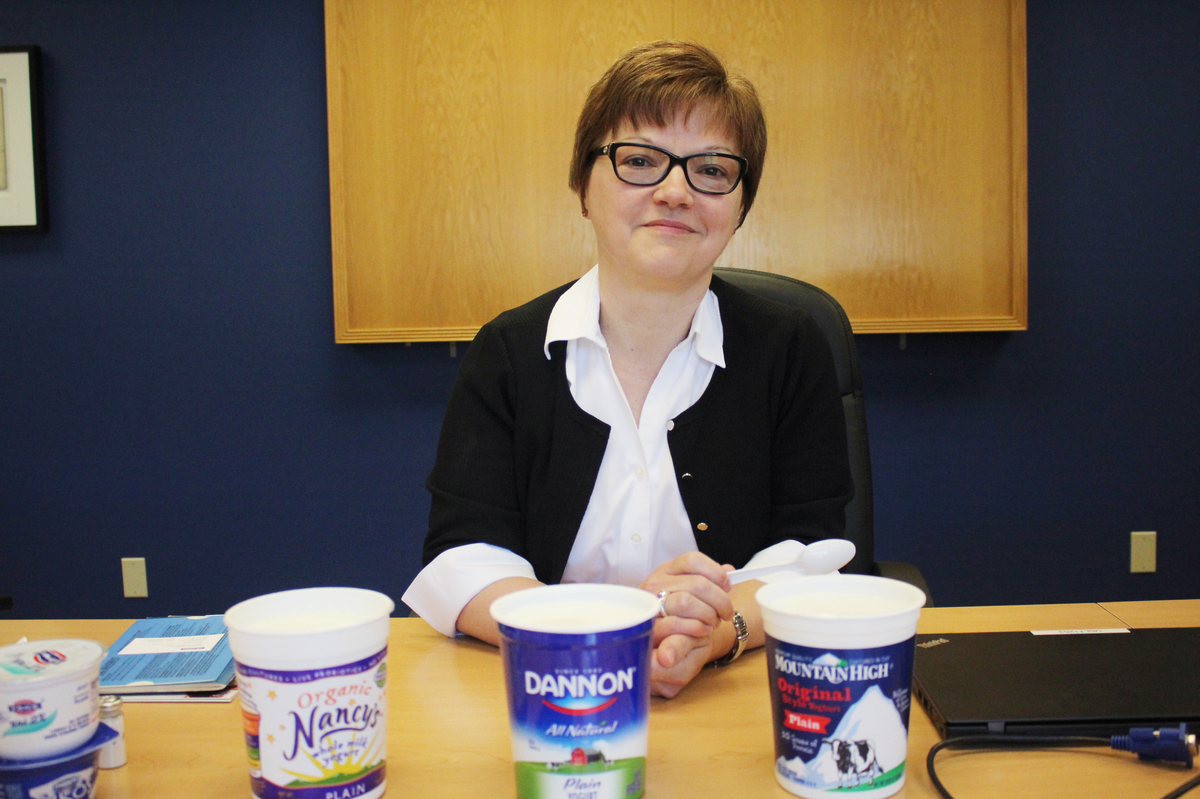 What Grandma didn't realize is how science can change the taste and texture of this food.

Despite the wild proliferation of yogurt labels these days — say hello, please, to Icelandic yogurt, Bulgarian yogurt and Australian yogurt — they all are made using a very similar recipe.

By law, anything called "yogurt" must be made from a few common ingredients: milk, of course, plus two species of bacteria called Lactobacillus bulgaricus and Streptococcus thermophilus. (Those are the essential ingredients; yogurt can also include other bacteria, as well as fruit and flavorings.)

So what makes Yogurt A different from Yogurt B?

Curic-Bawden explains that there's lots of variation within these two bacterial species, just as there's immense variation within our species, Homo sapiens. Some of these little creatures gobble up lactose faster than others; some release more of that sour, tangy flavor.

So her company, Christian Hansen, has assembled a kind of microscopic zoo: 60 different strains of yogurt-making bacteria. They were originally collected in the ancestral homelands of yogurt, including Greece, Turkey, Bulgaria, the Balkans and the Caucasus region. "We blend them in different ratios to achieve a certain texture and flavor," Curic-Bawden says.

Yogurt-makers with a particular vision for their yogurt make pilgrimages to Curic-Bawden's workplace, looking for the bacterial blend that's just right for them. "She's the doyenne of cultures," says Hilmarsson.

A typical yogurt-making culture contains four to six strains of bacteria. Each company's exact mix of microbes, however, is a closely guarded secret.

Deciding on that mix can be complicated. Douglas Stewart, co-founder of Smari Organics, which makes Icelandic-style yogurt, says his company had to adopt a different bacterial culture when the first version produced yogurt that the company's yogurt-straining equipment couldn't handle. "If we found something that worked better, we'd switch," Stewart wrote in an email.

Many yogurt-makers add additional species of bacteria to the mix, such as Lactobacillus acidophilus, Bifidus regularis and Lactobacillus casei. These "probiotics" may improve intestinal health (although the evidence for this is mixed), but they don't affect the yogurt's flavor very much, says Murray.

It's possible to get your hands on yogurt-making cultures that, do, in fact, trace their lineage back to someone's kitchen. There's a community of culture-sharing yogurt enthusiasts, and a company called Cultures for Health sells various yogurt starters, some of them labeled as Greek, Bulgarian and Finnish. But Julie Feickert, the company's founder, says she acquired these bacterial cultures from "people I know": fellow yogurt-makers near Portland, Ore., where she started the company, and elsewhere in the U.S.

The labels on these starter cultures, she says, refer to their historical origins, but their actual source is a matter of "legends and stories."

Curic-Bawden, for her part, believes that true "heirloom" yogurt cultures are now almost impossible to find. She says that most home yogurt cultures these days actually trace their ancestry to yogurt that someone bought in a store, which in turn came from the bacterial collections of companies like Christian Hansen.

Christian Hansen grows those microbes on a grand scale. Bacteria from this one company ferment 40 percent of all the yogurt sold in America.

Max McGloughlan, one of the chemists in charge of production at the company, shows me 8,000-gallon tanks where the bacteria multiply, and machines that concentrate the microbes into a thick soup. "After it is concentrated, we bring it over to our freezing area for pelletizing, and we make small droplets of frozen bacteria," he explains.

There are 100 million individual microbes in each little pellet. Each pound of pellets will make 1,000 gallons of yogurt.

They are the living heart of the yogurt business.