Accessibility links
What Ever Happened To The Boozy Cake In 'To Kill A Mockingbird'? : The Salt In Harper Lee's classic first novel, Scout Finch's neighbor is known for her Lane cakes. But it's now hard to find this Southern layered sponge cake filled with raisins and whiskey anywhere. 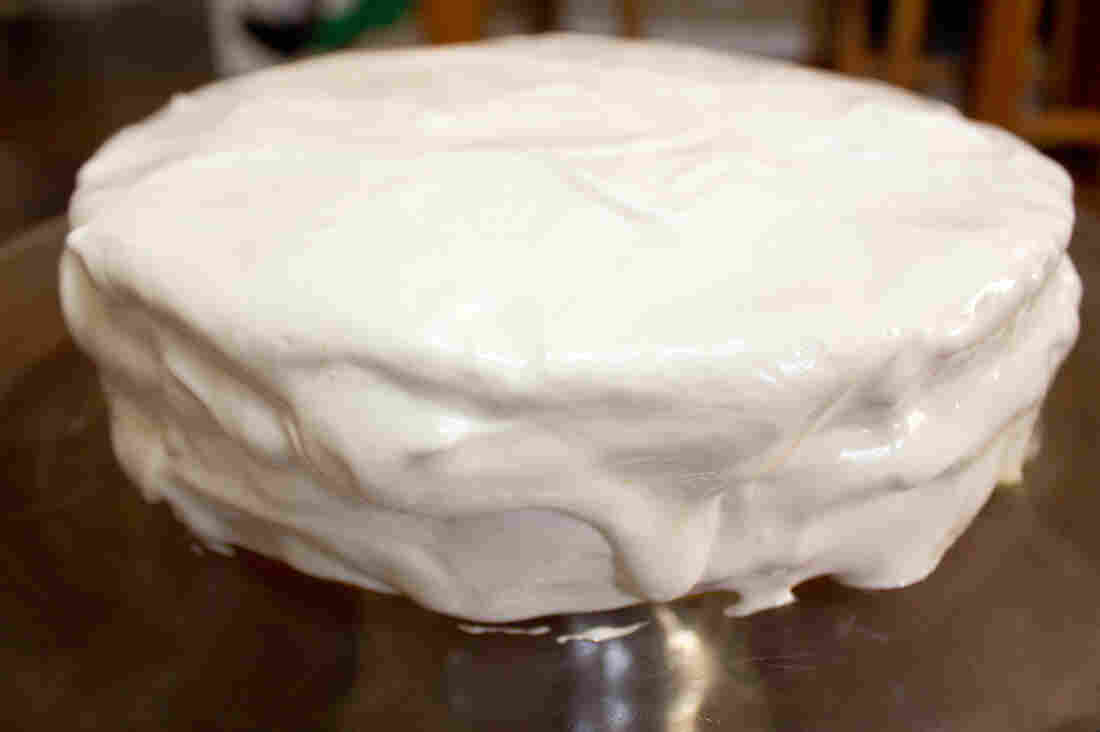 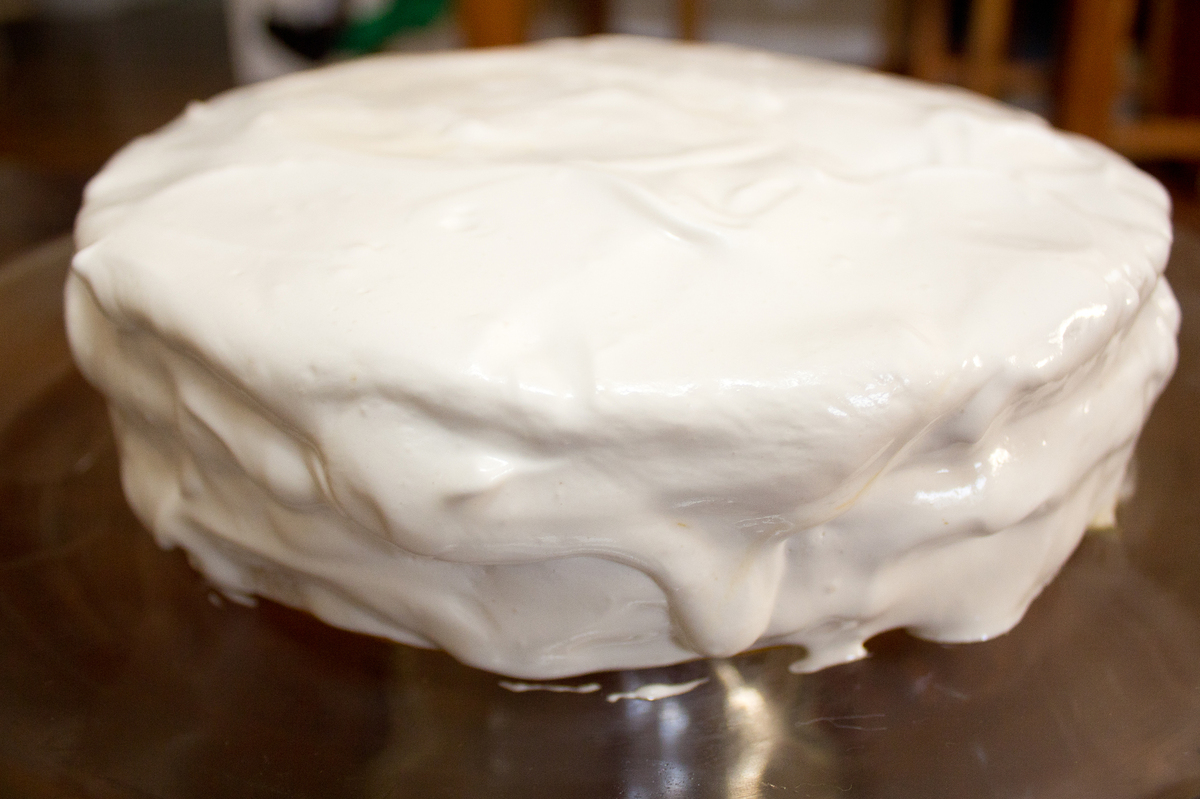 A Lane cake is a layered sponge cake filled with a rich mixture of egg yolks, butter, sugar, raisins and whiskey and topped with boiled icing.

To mark this week's release of Harper Lee's long-awaited second novel, Go Set a Watchman, why not try an old-fashioned cake from Alabama, featured prominently in Lee's classic first novel, To Kill a Mockingbird.

In it, Scout Finch's neighbor, Maudie Atkinson, is known for her Lane cakes and guards her recipe closely. She bakes one for Aunt Alexandra when she moves in with the Finch Family. Scout gets buzzed from the whiskey in it and comments, "Miss Maudie Atkinson baked a Lane cake so loaded with shinny it made me tight."

I was determined to try a slice of Lane cake after learning it was invented in Clayton, Ala., around the same time my ancestors lived there during the late 19th century. But it's now difficult to find this layered sponge cake filled with a rich mixture of egg yolks, butter, sugar, raisins and whiskey anywhere. During my travels across Alabama, I've always been on the lookout for it but never spotted it in the wild. A local baker from Clayton recently told me she'd never even heard of it.

Many other native Alabamians also say they are unfamiliar with the cake from the state's most famous novel. Wesley Vaughn, a city planner for the City of Birmingham and blogger for All Alabama, wrote that he had never heard of Lane cake after Slate named it the state's unofficial dessert in 2014.

Perhaps the extravagant dessert is just too difficult to make in these busy times. Determined to commune with my ancestors, I once baked it at home. It required mixing and baking the cake layers, slowly stirring egg yolks on the stovetop, making the boiled icing and letting all of the components cool completely before assembly. My lopsided yet delicious Lane cake ultimately took two full afternoons to make. For families without domestic help, Lane cake was reserved only for wintertime celebrations like Christmas when Southern kitchens were cooler.

But Lexi Ginsburg Mota, owner of The Cakerie in Birmingham, has carved out a niche as one of the few bakers in the city that makes the traditional cake. The Lane cake is actually one of her most popular items at Christmas time, she says.

Even as a trained pastry chef and native Alabamian, she had never even heard of it until an older customer requested one. "Everything in the South is through word of mouth," says Ginsburg Mota. "So ever since people found out we made it, we get more and more calls." Ginsburg Mota's recipe is based on one from the late Southern cookbook writer Edna Lewis. Like many later adaptations, it calls for just three layers instead of four and includes coconut and pecans.

Staunch, churchgoing Lane cake bakers have been known to substitute grape juice or apple cider for the liquor. The whiskey did serve a purpose, though — it preserved the cake so that a thin slice could be served whenever visitors stopped by. Ginsburg Mota says that it's actually the only cake is her repertoire that she bakes the day before pick-up.

Even the cake's creator, Emma Rylander Lane, thought the cake tasted best when made a day or two ahead of time. She included the advice in the original recipe that appeared in her cookbook Some Good Things to Eat, published in 1898.

Lane was likely a native of nearby Americus, Ga. According to legend, she moved to Clayton when her husband was transferred there as an employee of Georgia Railroad Company. It's where she created the cake and published the recipe in Some Good Things to Eat after she entered it in a baking competition and won first place.

Little else is known about Lane. Dana Alsen, a Ph.D. candidate in history at the University of Alabama and author of The Alabama Food Frontier hasn't been able to find solid evidence that Lane ever actually lived in Clayton. She thinks it's possible Lane lived in Georgia her entire life. Nevertheless, she says Lane Cake recipes were appearing in various ladies journals as "Alabama Cake" by the 1920's.

Layered cakes, also called stack cakes, became popular in the late 19th century. Until then, pies and puddings had been the most common desserts. Thanks to the railroad and the Industrial Revolution, Southerners, who had previously relied on cornmeal for sustenance, suddenly had more access to wheat flour, baking powder and baking soda.

While caramel and strawberry cakes still hold down Alabama's dessert table, Alsen admits most of her fellow graduate students in Tuscaloosa have never even heard of a Lane cake, let alone tried it. She's actually only seen it served once at a party and never at a restaurant. The cloying combination of sweet icing and filling combined with raisins might be too much for modern palates. "It's so incredibly sweet; you kind of need alcohol in it to kill the sweetness," Alsen says. "I wonder if palates have changed."

The Lane cake may have suffered a fate similar to its sometimes-maligned cousin— the fruitcake. Alabama cookbooks from the early 20th century are also filled with fruitcake recipes for celebrations. In "A Christmas Memory" by Harper Lee's childhood friend Truman Capote, a child and his relative collect ingredients like dried fruit, pecans and whiskey to bake fruit cakes for Christmas in rural Alabama. "Lane cake is actually a lot like fruit cake in a way... in terms of texture and taste," Alsen says. "I wonder if it's just fallen out of vogue."

Ginsburg Mota, the baker in Birmingham, has tweaked her Lane cake recipe to remove some of the sugar, so perhaps that's why her version is in-demand right now. She thinks the popularity of the box cake mix in homes and in bakeries eventually forced the Lane cake into obscurity. "The Lane cake requires some knowledge of how to cook with eggs and it also involves a lot of ingredients," Ginsburg Mota explains.

Maybe the Lane cake will slowly reappear as people all across the country, including Alabamians, take more interest in from-scratch cooking and techniques. "It's still mostly older customers who order it," Ginsburg Mota says. "I think many young people don't really know about it. But when they try it, they love it."

This recipe is based on the original that appeared in Emma Rylander Lane's cookbook Some Good Things to Eat. It called for baking four layers in pie tins, but, with modern day cake pans, it's better to bake it in three layers.

Preheat the oven to 350 degrees Fahrenheit. Combine the flour, baking powder and salt, and sift together three times. In a separate bowl, use a mixer to cream together the butter and sugar for at least two minutes. Alternately add the flour mixture and the milk to the creamed butter and sugar, starting and ending with the flour. Stir in the vanilla and set aside.

In another bowl, beat the egg whites until they form firm peaks and then fold them into the cake batter. Separate the batter into three 9-inch cake pans and bake until the sides are well-browned (20 to 25 minutes). Remove from the pans and allow to cool completely

In a saucepan, beat together the egg yolks, sugar and butter. Place the saucepan over medium low heat, stirring constantly, until the mixture is thick. Remove from heat and immediately add the raisins, whiskey and vanilla. Spread the filling evenly between the cake layers and set aside.

For the icing, combine all the ingredients in a double boiler. Using a mixer, beat the ingredients constantly for seven minutes or until peaks form. Remove from the heat and allow to cool. Then spread the icing evenly over the top and sides of the cake.

Meredith Bethune is a food and travel writer and associate editor of Eater DC. Twitter: @meredithbethune.

A previous version of this post incorrectly identified a Truman Capote story as "A Christmas Story." The title is actually "A Christmas Memory."