Accessibility links
Why We Have Yogurt To Thank For Human Civilization : The Salt We got milk when we domesticated goats and sheep around 9,000 BC. At first, that milk was easier to digest when fermented. So yogurt, along with other Neolithic foods, helped fuel civilization.

We Didn't Build This City On Rock 'N' Roll. It Was Yogurt

We Didn't Build This City On Rock 'N' Roll. It Was Yogurt 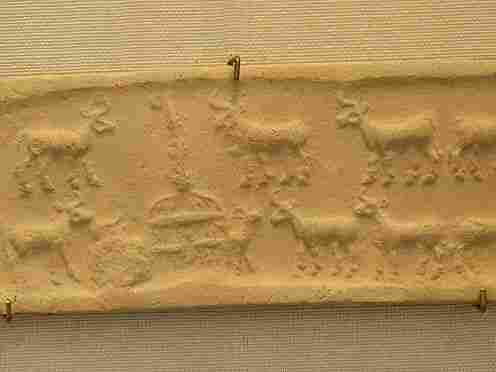 Cylinder seal and impression showing a cattle herd at the cowshed from Mesopotamia in the Uruk Period (4100 BC–3000 BC). via Wikimedia hide caption 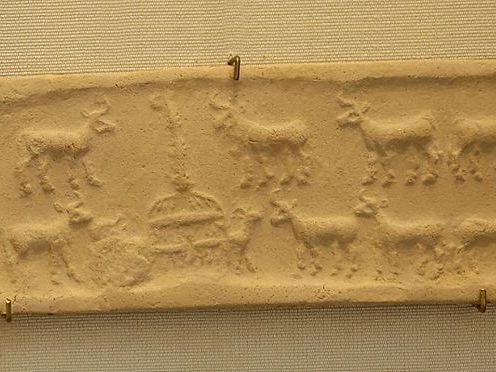 Cylinder seal and impression showing a cattle herd at the cowshed from Mesopotamia in the Uruk Period (4100 BC–3000 BC).

Since The Salt is diving deep into yogurt this week, let's take a moment to rewind all the way back to 10,000 BC when it all began.

During the Paleolithic, or "Old Stone Age," humans relied on hunting and gathering for food and, as a result, lived a nomadic lifestyle. With the advent of the Neolithic, or "New Stone Age," around 10,000 BC, humans began the process of domesticating plants and animals in what is today the Middle East.

That radical transformation was the beginning of the expansive dairy aisle we have today. And it's fair to say that the civilizations we've built in the meantime were fueled, in part, by yogurt (cheese, too).

Plants, mainly grains like wheat, were domesticated first, followed by sheep and goats roughly a millennium later. Human figured out that their meat was tasty, but both sheep and goats were primarily kept for their highly nutritious milk (and their wool). Cows didn't show up as domesticated species until around the 4th millennium BC.

There was just one problem with milk as a new food source: Lots of people had trouble digesting it. Humans are born with an enzyme called lactase in the gut. But in many human populations lactase disappears after breast feeding, a condition called lactose intolerance. About 65 percent of the world's population today is still lactose intolerant, and the rate is as high as 90 percent in some places.

But the beauty of yogurt is that much of the lactose is transformed into lactic acid, which is more easily digested by the body. With the invention of fermented dairy products, including cheese, lots of people were able to utilize the calories, fats and proteins that dairy provides without getting sick. 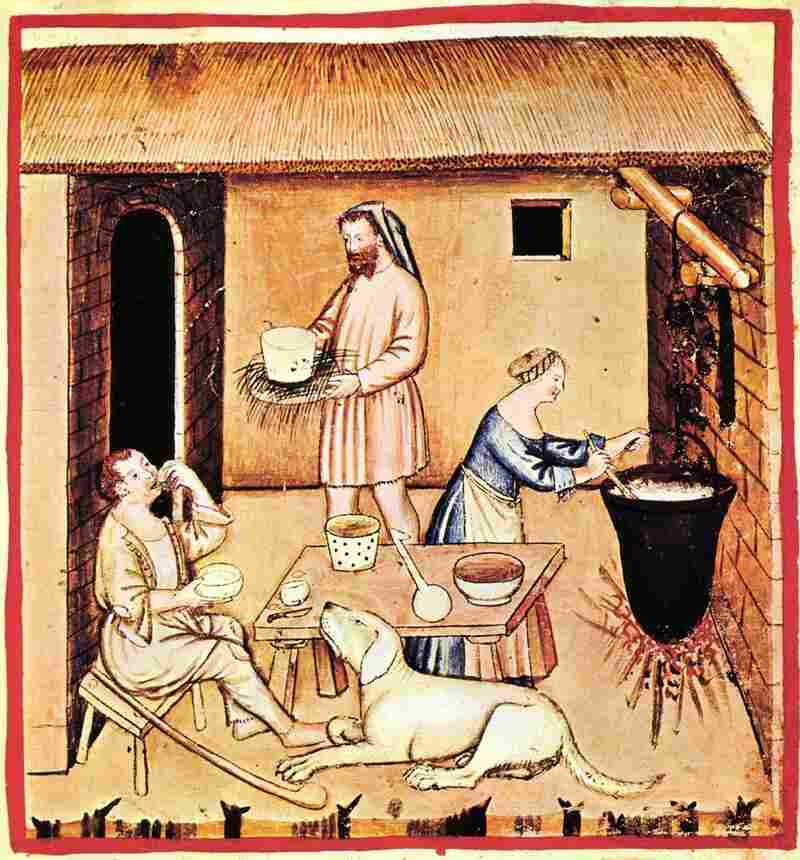 A depiction of meal with cheese from Tacuinum Sanitatis, a medieval handbook on health and well-being based on the Taqwim alâsihha, an 11th-century Arab medical treatise. via Wikimedia hide caption 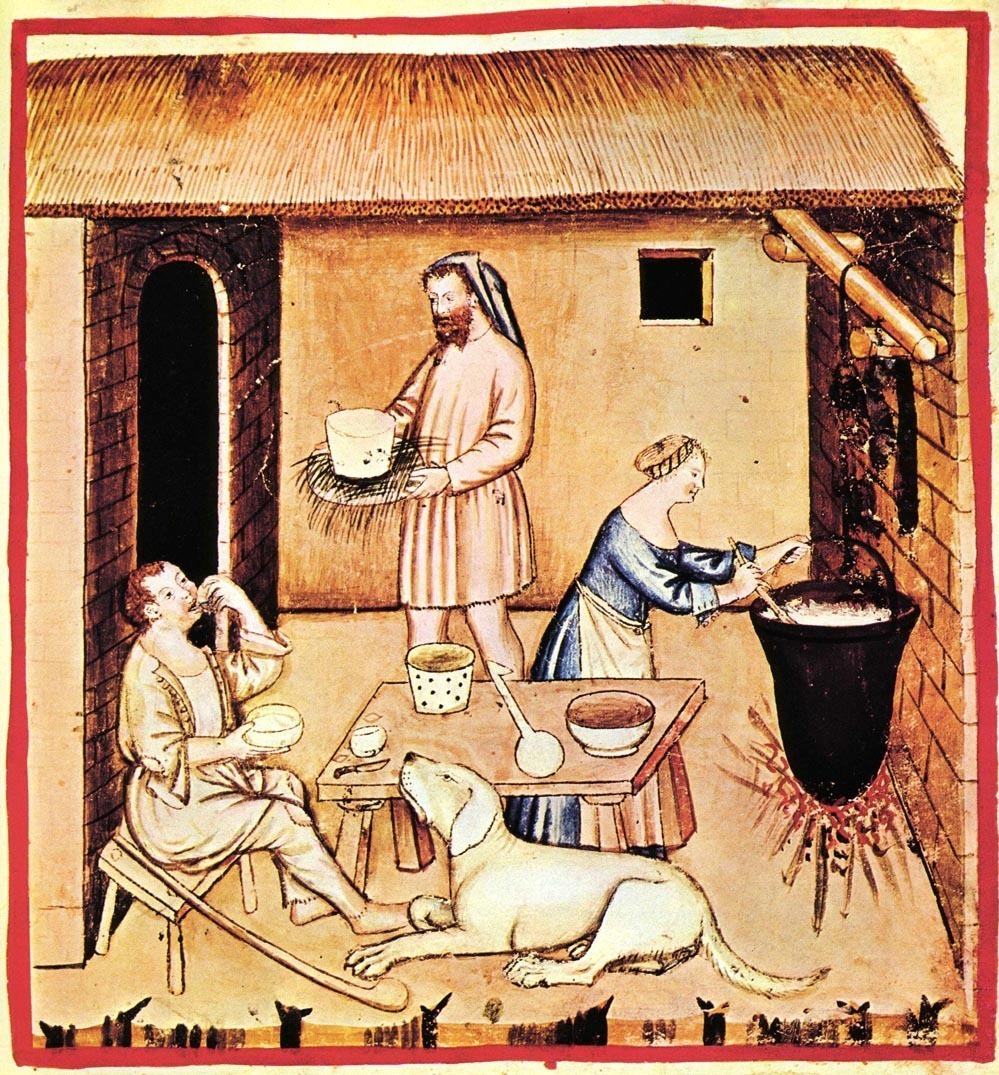 A depiction of meal with cheese from Tacuinum Sanitatis, a medieval handbook on health and well-being based on the Taqwim alâsihha, an 11th-century Arab medical treatise.

Mark Thomas, a professor of evolutionary genetics at University College London, has studied the spread of lactose tolerance in ancient populations. He says he believes that because the ability to digest milk wasn't widespread in the early days of dairy, "adult consumption of dairy products was most likely limited to fermented products," such as yogurt.

How people figured out that letting milk ferment turned it into tangy, creamy, digestible yogurt is still a mystery. The best bet is that it was probably all an accident. Microorganisms, like bacteria, are everywhere in the environment. Some are good, some are bad, and some can transform milk into yogurt. Early sedentary societies already had a lot of experience with fermentation because of the domestication of grains; it's the same process that makes bread rise and beer alcoholic.

Once people started using animals for milk in the Neolithic, the use of fermented dairy products was not far behind. Thomas notes that, "if you milked a cow in the morning ... in the Near East by lunchtime it would have started to ferment into yogurt."

The likeliest scenario of how our Neolithic ancestors discovered yogurt is that at some point raw milk was exposed to a strain of wild bacteria that produced a thick, creamy product after it had been left to sit in a warm place. Humans, being the curious species we are, tasted it and liked it. More importantly, we realized that it could be stored without spoiling longer than raw milk and that lots of people could eat it.

The upshot is that yogurt was then a catalyst for building societies. Since more people could digest this reliable and calorie-dense source of nutrition, the newly sedentary populations of the Near East were able to gradually increase in size. These newly sedentary yogurt eaters would eventually come to establish the world's first urban civilizations.

To be clear, a lot of other foods helped fuel civilization. But yogurt is one reason Neolithic peoples where able to so thoroughly advance human society.

Despite its apparent antiquity, the first unambiguous reference to yogurt is from an 11th century AD dictionary of Turkic languages. In fact, "yogurt" is a Turkish word which indicates who introduced it to Europe and the English-speaking world.

Yogurt has remained popular close to its place of origin in the Middle East and Central Asia. Turkey today is one of the top yogurt-consuming countries with about 282 cups per person per year consumed in 2013, according to Euromonitor. (Compare that with the U.S.: We consume just 62 cups per person per year.) Eventually it spread east where it became a fixture in the cuisines of India and neighboring countries.

With the exception of the countries nearest Turkey, for most of its history yogurt was not part of the European diet and only become more widespread at the end of the 19th century. In the U.S. yogurt remained relatively unknown until the second half of the 20th century when Dannon started manufacturing yogurt in the Bronx.

Adam Maskevich is an archaeologist who has worked extensively throughout the Middle East. He has also taught classes on the history of food and cooking in antiquity and the politics of archaeology. His last post for The Salt was about cumin.