Accessibility links
Tea Sommeliers Are The Hot New Thing In Food Pairing : The Salt Which black tea goes best with blue cheese? It turns out there is an art to unlocking new flavors in your food by pairing it with tea. And a whole new breed of experts has risen up to spread the word. 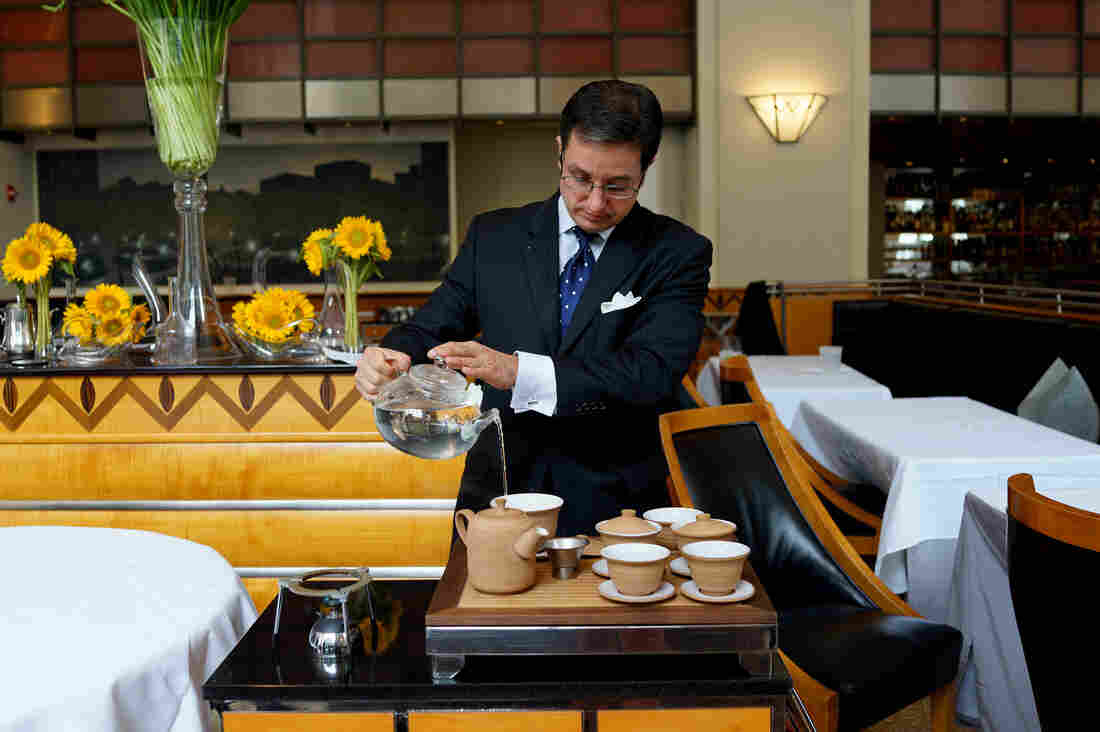 Christopher Day, the dining room manager at Eleven Madison Park, is also the man behind its tea program. "My goal has always been to put together a tea list with the same standard and rigor as you would with wine," he says. Kathy YL Chan for NPR hide caption 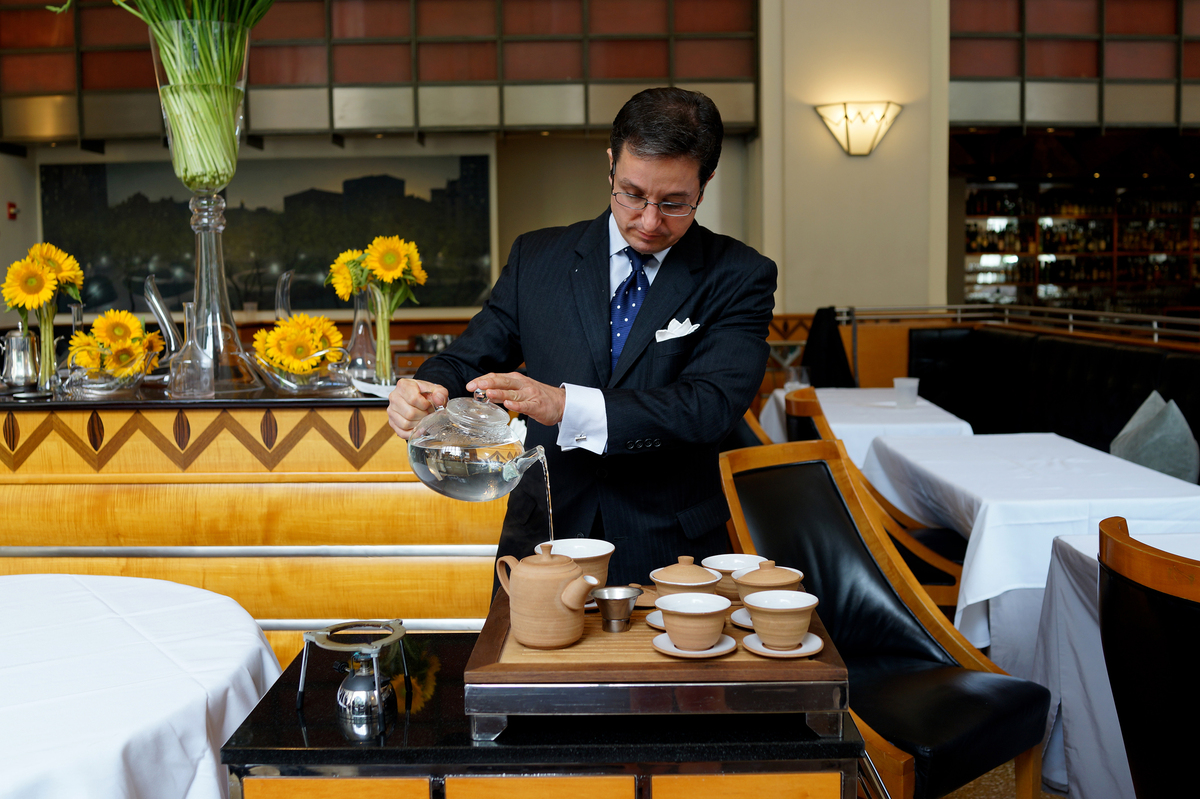 Christopher Day, the dining room manager at Eleven Madison Park, is also the man behind its tea program. "My goal has always been to put together a tea list with the same standard and rigor as you would with wine," he says.

Even those of us who can't tell the difference between a pinot noir and a merlot are probably familiar with the basic rule of wine pairing: white wine with fish and red wine with steak. But when it comes to tea pairings, we're stumped.

Yet it turns out there is an art to unlocking new flavors in your food by pairing it with tea. Sipping oolong with a buttery, citrusy madeleine can highlight the flowery and milky notes of the tea, while a hot cup of green tea melts the texture of goat cheese and enhances its creamy notes.

Now a whole new breed of experts has risen up to spread this knowledge: tea sommeliers.

"The whole idea of pairing tea with food is that you should have a tea that's going to enhance the flavor of the food, or vice versa," explains Aurelie Bessiere, a tea expert at Palais des Thes, a tea production company based in France. "What you want to happen in your mouth is to feel the different layers of taste and flavors of both tea and food."

Tea-Infused Sweets: Chocolate + Jasmine Tea Is A Match Made In Heaven

This is where tea sommeliers come in.

"It's like a wine sommelier, giving you advice, depending on what kind of tea you want to drink, what time of the day it is, and what you're eating," says Bessiere, a tea sommelier herself.

It's a fairly new concept — and very much a Western term, Bessiere says. In the East, by contrast, the rituals surrounding tea follow stricter guidelines and often have a deeper cultural as well as political meaning behind them, as exemplified by the Japanese tea ceremony.

To become a tea sommelier, you need to know a lot about tea: where it's from, how it's made, the different aromas and flavors in tea and which ones pair well with what kind of food, says Bessiere. The International Tea Masters Association even developed an aroma wheel for tea, modeled on a wine aroma wheel, which lists aromatics such as spicy, earthy and floral as starting points for evaluating tea.

Palais des Thes, which offers tea sommelier training classes in Paris, often works with hotels and restaurants around the globe that are gradually changing their approach to tea, bringing it to the front and center of the dining experience.

One of the restaurants it recently started working with is Eleven Madison Park in New York — a fine-dining establishment also known for its tea program. 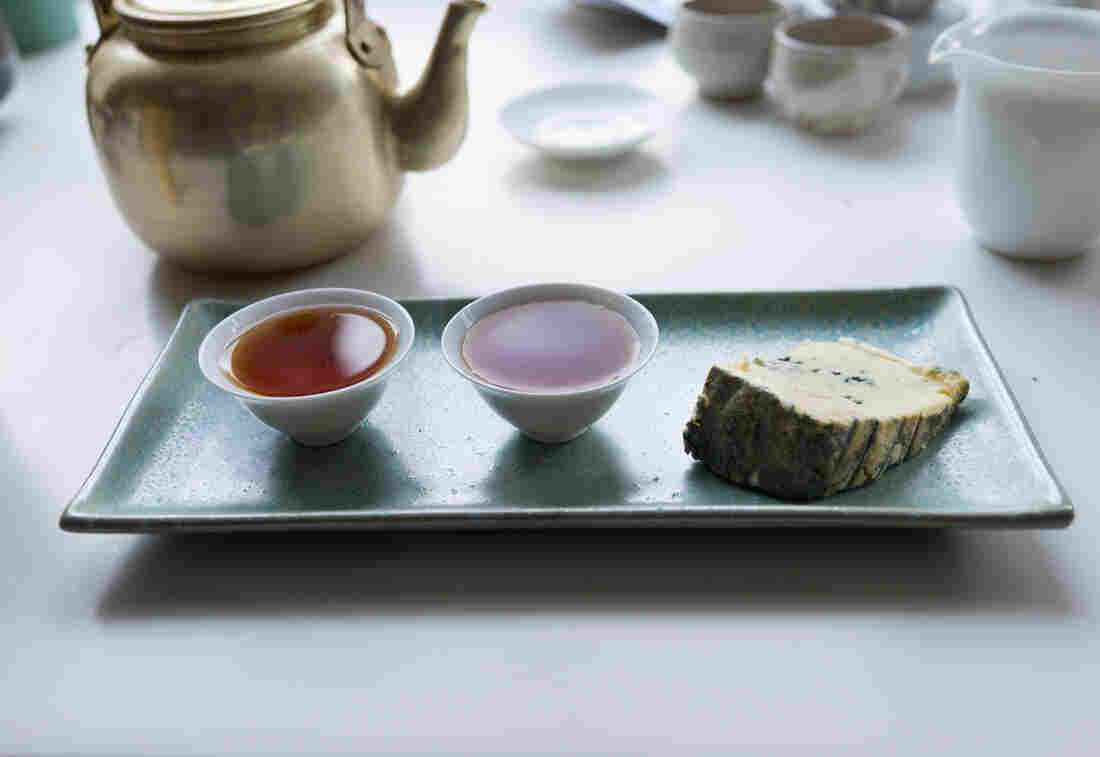 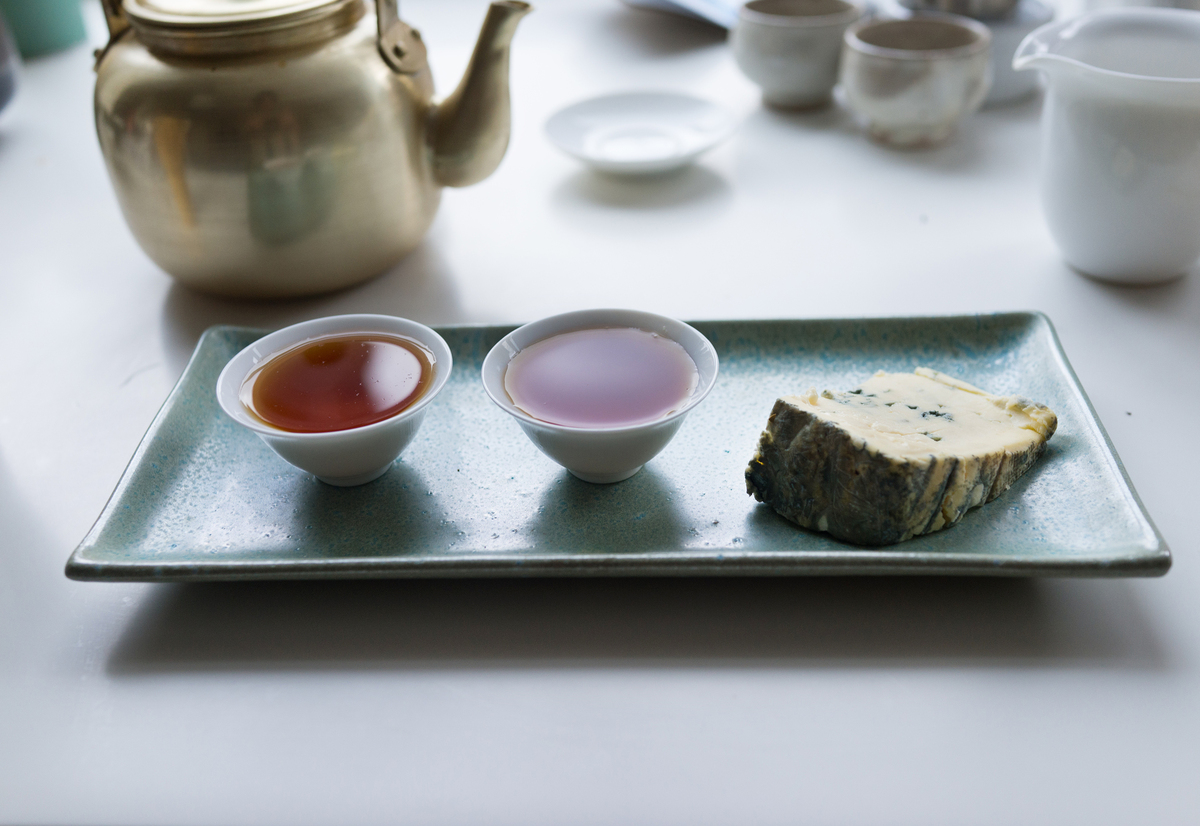 "My goal has always been to put together a tea list with the same standard and rigor as you would with wine," says Christopher Day, the dining room manager and head of the tea program at the restaurant. "I try to taste and select teas that are representative of the major styles of oolong, black and green tea."

The tableside tea program at Eleven Madison Park boasts four different oolongs, two different types of pu'erh, a Hawaiian black tea and many more tea options — loose tea, not tea bags — directly sourced from the country of origin through vendors like Palais des Thes, Teance and In Pursuit of Tea, and individual farms as well.

The tea can be served by the pot, or tableside in the Chinese traditional gong-fu style with gaiwan (a three-piece ceramic tea cup with lid, cup and saucer) at any point of the meal. The gong-fu style of tea-drinking is rooted in the traditional Chinese tea ceremony. It's seen as an intimate act between drinker and server that demonstrates both art and skills in brewing and serving tea. Both the tea selection and the accompanying service go above and beyond the Earl Grey or chamomile tea bag you might find at most restaurants.

Tea sommeliers make their recommendations much like their counterparts in wine do: They talk with the diners, taking into consideration what they're looking for in the tea and what dishes they've ordered, Day says. "We provide background but also space in terms of recommendations" for tea and food pairings. There are general guidelines, but experimenting is really the best option, according to Day.

"We once served a pu-erh at cellar temperature with celery root that had been cooked in a pig's bladder," Day tells of a particular pairing experiment. "The reasoning was that the bladder course was extremely fragrant, and we wanted to highlight the earthiness of the tea on the palate without competing with or diminishing the fragrance of the bladder course, which was cut open in front of the guests and served immediately. It worked extremely well."

For many customers, the pairings can be a revelation, says Jeff Ruiz, head of the tea program at the restaurant Atera in New York City.

Atera offers a tea pairing that's specific to the course, matching six types of tea with the restaurant's 16- to 18-course tasting menu.

"Everyone that gets it, it changes their perspective," Ruiz says, with customers often exclaiming how eye-opening the pairing experience has been.

When you pair a specific tea with a specific dish, the pairing can "unlock a third flavor," Ruiz says. He's fascinated by the multidimensional flavors you can coax out of teas and enjoys the challenge of exploring potential pairings with Atera's chef.

For example, a new dish on the menu — foie gras with blackcurrant and peanut — is paired with a second-flush Darjeeling tea prepared hot.

"[The tea] helps the foie gras melt. It brings everything together. Black tea tannin matches the fat content in the foie gras. Everyone is skeptical, but it just works, and it works beautifully," Ruiz says.

"Every tea has a story to tell," says Christopher Day, head of the tea program at Eleven Madison Park in New York City. Tea sommeliers are there to help tell that story, but you don't need to be an expert in tea to appreciate the long history and variety of flavors the beverage brings, especially when paired with food.

In fact, here are some simple food and tea pairings you can try at home, suggested by the tea experts we spoke with for our story.

Butterfly of Taiwan ooolong with sheep cheese such as Ossau Iraty

The cheese enhances the fruity (think apple puree and candied citrus) and honey notes of the tea, which seems sweeter. The strong woody notes of the tea are elevated to a lighter and greener tone.

This pairing enhances the sweet, fruity notes of both the tea and the cheese. The cheese cuts the astringency of the tea and makes it much rounder. The green, vegetal notes of the tea become stronger, allowing for a fresh and long-lasting finish.

The slightly lemony madeleine melts in the mouth with the tea, and its buttery and citrus notes highlight the flowery (rose, jasmine) and milky notes of the tea.

The peach and apricot notes and distinct honey sweetness of the tea accentuate the flavor of the cherries.

The kabuse is a green tea with high levels of umami — a pleasant, savory taste — as well as sweet and salty. When these three flavors hit melted chocolate, you unlock a flavor similar to pure cantaloupe.